Teens and tweens need exercise, period. Many parents are finding informal, creative and encouraging ways to get their isolated offspring outside safely.

As any parent overseeing homeschool knows: Zoom P.E. is hardly a hard-driving Peloton class. It’s more like your kid lying on the floor of the living room doing halfhearted leg-lifts by the light of her laptop.

Many students, particularly tweens and teens, are not moving their bodies as much as they are supposed to be — during a pandemic or otherwise. (60 minutes per day for ages 6 to 17, according to the Centers for Disease Control and Prevention.) A March 2020 report in The Lancet offers scientific evidence as to why your kids won’t get off the couch: As children move through adolescence, they indeed become more sedentary, which is associated with greater risk of depression by the age of 18. Being physically active is important for their physical health as well as mental health.

Many parents are taking charge, finding informal and creative ways to entice their isolated tweens and teens off their screens and outside — with others, safely. To get your own younger ones moving, here are a few ideas from families around the country, all almost-guaranteed hits, even with winter coming.

A SENSE OF CAMARADERIE 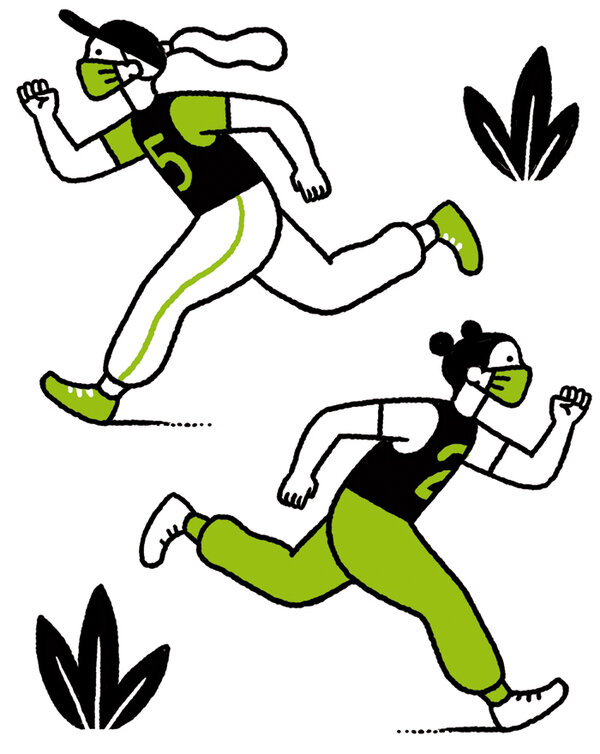 In San Francisco, under rain, fog or blue skies (or even the infamous orange one), a group of sixth graders have been gathering in Golden Gate Park two times a week to run two miles. Their unofficial motto: “Safe Distance, Minimal Distance.” Masks are required and photo breaks are frequent, as is post-run ice cream. Started on a whim by local parents in late-August, the club has been such a hit, attracting anywhere from six to 20 kids each run, that some occasionally call for a third afternoon per week, even a 7 a.m. before-school meet-up (in which case they serve doughnuts). But treats are not the ultimate draw.

“I like the experience of being with my peers and actually doing something, all at the same time,” 11-year-old Henry Gersick said. “Instead of just sitting there.”

One of the most accessible, inexpensive, socially distanced sports is something you may not even realize is a sport. Since the pandemic began, jump-roping has become “a TikTok craze,” according to Nick Woodard, a 14-time world-champion jump-roper and founder of Learnin’ the Ropes, a program designed to teach kids and adults the joy of jumping. “All you need is time, some space and a $5 jump rope, and you’re good to go,” Mr. Woodard said.

Based in Bowling Green, Ky., Mr. Woodard and his wife, Kaylee (a six-time world champion in her own right), have been leading virtual workshops for children as young as 6, from Malaysia to Germany. A 30-minute class costs $35 for one child, and includes spiderwalk warmups, instruction, and challenges. (How many jumps can you do in 30 seconds?)

“They have so much fun, they don’t even realize they’re getting exercise,” Ms. Woodard said. But a selling point right now is that jumping rope — unlike team sports — is something you can do together, apart.

A DOSE OF ADVENTURE

Take a hike with family and a friend.

“My kids are reluctant to do anything outdoors, unless we’re meeting up with another family, then they’re totally into it!” said Ginny Yurich, founder of 1000 Hours Outside, a family-run Instagram account with over 112,000 followers that challenges youth to spend an average of 2.7 hours a day outdoors per year. “Make sure you have food, a first-aid kit and friends — friends are the linchpin,” she said. (Masks, too.)

Ms. Yurich, a Michigan mother of five, drags her children on day hikes, yes, but also on evening lantern-lit hikes, rainy hikes and snowy walks. She was inspired, she said, by the 2017 book “There’s No Such Thing as Bad Weather,” by the Swedish-American author-blogger Linda McGurk, who espouses the Scandinavian concept of friluftsliv, or “open-air living.” For Ms. Yurich and Ms. McGurk, experiencing the outdoors is paramount to children’s development and well-being.

If you prefer not to pod during the pandemic, follow the lead of Dave Rubenstein, a father of two in Lawrence, Kan., by enacting “Forced Family Fun Time.”

“We call it F.F.F.T.,” Mr. Rubenstein said of the weekly activity. “It usually involves a hike around the lake in town, but it could be any outdoor activity teenagers typically hate. And if they complain, the punishment is more F.F.F.T.”

“Kids are biking like never before,” said Jon Solomon, a spokeman for the Aspen Institute’s Sports & Society Program, the nonprofit’s initiative to help build healthy communities through sports. Over the year, leisure bike sales grew 203 percent year over year, he said.

In one neighborhood in Denver, one neighbor has opened up a half-mile dirt bike track on his property to all the kids on the block. Wyatt Isgrig, 14, and his friends tackle it often by mountain bike, scooter or motorized dirt bike.

Ali Freedman, a mother of two in Boston’s Roslindale neighborhood, has loved watching children of all ages on her street playing together. “Every day around 3:30 p.m., kids we never knew before Covid come biking by our house asking ‘Can you play?’” Ms. Freedman said.

The young crew all wear masks — “Moms have a text thread going to check on enforcement when masks become chin diapers,” said Ms. Freedman, who peers out the window every so often — and best of all: “They stay out until dinner.”

CREATING SOMETHING NEW, TOGETHER

Invent your own game.

In a September survey conducted by the Aspen Institute and Utah State University in response to the coronavirus pandemic, 71 percent of parents said “individual games” (like shooting baskets solo) were the form of sport with the highest comfort level for their kids, followed by classic neighborhood pickup games like basketball or tennis.

But inventing your own game has its own rewards. One otherwise boring day in suburban Maryland, Mr. Solomon and his son, 11, came up with something they call hock-ball. It involves a hockey stick and a tennis ball and an empty sidewalk or street.

Mr. Solomon attempted to explain. “You roll the tennis ball like a kickball — it could be smooth, or slow, or bouncy — and the person with the stick tries to hit it past the pitcher, then runs back and forth to home plate.” There are points and innings and it’s apparently fun for all ages. “Only problem is, the ball inevitably rolls under a parked car, ” Mr. Solomon said.

A (COLD) SURGE OF HOMETOWN PRIDE

Bundle up for snow yoga.

In Milwaukee, where daily high temperatures in winter often hover below freezing, Kendra Cheng said her seventh grader will be doing much of the same as she did over the summer, only wearing more clothes: kickball, trampoline tag or even “water-skiing on land” — which calls for two kids, a broken hammer, a rope, and Rollerblades (or cross-country skis).

But the hot new thing in Ms. Cheng’s neighborhood, she said, will be snow yoga, led by a certified yogi friend. Once it starts snowing, 10 to 20 people will gather twice a week at a safe distance in a private backyard with a backdrop of Lake Michigan. “In Wisconsin, we love the cold,” Ms. Cheng said. “We love snowpants. We love barely being able to move because we have five layers on. And we’re all excited to do downward dog outdoors to create our sweat.”

If all else fails, bribe them.

Pay your kid — a dollar, a quarter, a penny — per minute to walk the pandemic puppy you just got.

“It gets them out of the house and out of my hair — and they earn some money,” said Murray Isgrig, parent of Wyatt in Denver. “Even though they don’t have anywhere to spend it.”