BEACON, N.Y. — Of all New York’s museums, none has a stronger house style than the Dia Art Foundation. It committed early on to supporting a small number of artists, such as Donald Judd and Dan Flavin, and presented their work in uncommonly long exhibitions of up to a year. It also undertook permanent installations in New York and in the American west, where the Dia commissioned Walter De Maria’s “The Lightning Field” and now maintains Robert Smithson’s monumental earthwork “Spiral Jetty.”

Most of the Dia’s chosen artists were Americans and Germans, working in minimal and conceptual idioms that privilege processes, materials, phenomenology and environment. By 2003, when the foundation moved its permanent collection to a renovated box factory in this Hudson River town, my colleague Michael Kimmelman bestowed these artists with a new sobriquet: “The Dia Generation.”

This year the foundation turns 45, and — discreetly, deliberately — it has been rethinking just what that Dia Generation looks like. Over the last four years — under its British director, Jessica Morgan, who took the reins in 2015, and its chief curator, Courtney J. Martin, who is leaving this summer to direct the Yale Center for British Art — Dia has been introducing new artists into its permanent collection, and telling a fuller story of postwar art without turning its back on its essence.

A good chunk of its programming has featured women working at the same time as the Dia boys, among them Nancy Holt, Mary Corse and Dorothea Rockburne. Even more impressive has been the Dia’s quiet tilt to Asia. Ms. Morgan’s team has spearheaded acquisitions of Japanese and Korean sculpture from the years around 1970, whose nontraditional forms dovetail with the processual and conceptual techniques of their American and European counterparts. 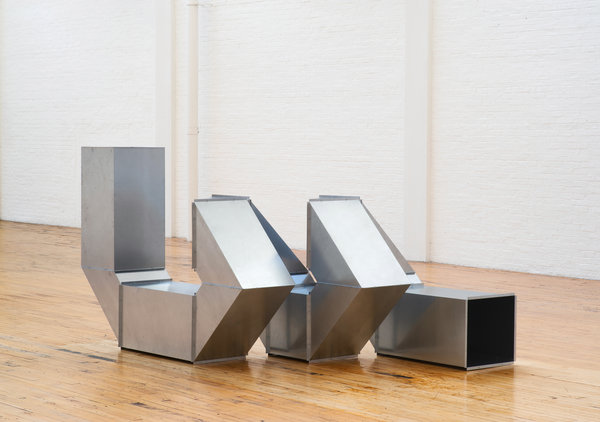 Come to Beacon now and you can see this larger Dia Generation coming into focus in two assured presentations. The larger is the first full American retrospective of Charlotte Posenenske (1930-1985), a German artist whose factory-made sculptures and wall reliefs are a natural fit here. After early, improvised “art informel” paintings made with a palette knife or spray gun, Posenenske in 1967 and 1968 turned to industrially inspired sculptures of aluminum, steel or cardboard, whose modular components could be combined and reproduced at will. She showed these serial sculptures alongside works by American colleagues like Judd and Sol LeWitt — but Posenenske abruptly quit making art in 1968, and devoted the rest of her short life to sociology.

The Dia has filled two of its largest galleries with all her major sculptural series, including simple reliefs made of two steel sheets joined at an angle, or human-scale aluminum boxes that support large panels on hinges, which viewers can open like doors. Her most important series was the “Vierkantrohre,” or “Square Tubes”: free-standing pipes, articulated out of any number of cuboid or trapezoidal chutes, that look almost exactly like commercial air ducts. First made of sheet steel, later made of cardboard, these standardized parts can be combined in any shape you like — several trapezoids can be joined into an X that sits on the floor, or a dozen pieces can climb and curve in on themselves, like in the classic Snake arcade game.

The Posenenske exhibition, which has been organized by Ms. Morgan and the Dia curator Alexis Lowry, commands us to reassess other art using serial forms, whether Flavin’s rhyming arrangements of fluorescent bulbs, LeWitt’s exhaustive variations of crossed lines, or On Kawara’s day-by-day paintings. Unlike them, Posenenske saw seriality as a tool to cede authorship of her art to the workers who would fabricate its components, as well as to the collectors or curators who would arrange them.

To see them here in Beacon, in the postindustrial minimal architecture beloved by cultural mandarins and plutocrats worldwide, also highlights certain economic tensions that eventually led Posenenske to abandon art for sociology. Where Judd, Flavin and others made small editions that now sell for elevated sums, Posenenske’s were unlimited and sold at cost. They still are today. At the Dia, some lightly patinated prototypes of the Square Tubes stand in the same gallery as freshly fabricated sculptures — each as much a “Posenenske” as any other.

Smaller than the Posenenske retrospective, but more radical in its implications for the museum, is a stellar presentation of five sculptures by the Paris-based Korean artist Lee Ufan. While Posenenske has been a specialist’s name up to now, Mr. Lee is among Asia’s most renowned living artists, with a permanent museum devoted to his work in Japan and a major retrospective up now at the Centre Pompidou’s satellite in Metz, France. Yet Asian art was well out of the Dia’s initial purview, and his introduction here should prompt a serious rethinking of the aims of elemental sculpture in the years around 1970.

The largest work here by Mr. Lee, from 1969, comprises some 20,000 reedy steel poles planted in a foot-tall beach of golden sand, and resonates with Smithson’s “non-sites” of dirt and gravel, made the very same year and on display nearby. The rods are packed so densely that they scramble your vision; most of them stand upright, but some have succumbed to gravity and droop or collide. Mr. Lee initially called the work “Iron Field,” but later retitled it — along with every one of his sculptures — with the philosophical term “Relatum,” which means an element in relationship with others.

Mr. Lee initially first made this and all the other works here in Tokyo, where he moved in the mid-1950s; most have been refabricated in the last decade. Though Korean, he was the prime mover of Japan’s Mono-ha art movement (“School of Things”), which favored unadorned materials, both natural and industrial, arranged in modest and contingent alliances. Another “Relatum” here, initially made in 1974, offers a prime example. A weathered log is suspended from the ceiling by a rope, and rests at a 60-degree angle on a large steel plate; the plate itself is lifted slightly from the floor by dozens of small stones.

Contrast these with Smithson’s non-sites, or perhaps with Richard Serra’s splashes of molten lead chucked against the wall, and you’ll notice that Mono-ha places much less emphasis on the artist’s processes or the physical context of the gallery. Rather, Mr. Lee is more concerned with presenting materials in their most elemental states, and pushing our perception of them into a pure realm beyond language or meaning. And showing Mr. Lee’s art here underscores that the Dia Generation’s approaches to sculpture — industrial fabrication, minimal forms, undisguised processes — were not the summit of art-making circa 1970, but just a few ways among many of pushing past tradition. That marks this presentation, even more than the Posenenske show, as a quiet and laudable broadening of the museum’s vision.

More changes are coming. Later this summer Ms. Martin, Dia’s departing chief curator, will organize a presentation of free-hanging paintings from 1969 by Sam Gilliam, another innovator never before shown here. And there remains ample room for Dia to globalize its view of elemental sculpture of the 1960s and 1970s — pivoting to Arte Povera in Italy, say, or the New Art Practice of Yugoslavia, or the Neo-Concretists of Brazil. It should do so, though, only if it can devote the same time and resources that it has afforded Posenenske and Mr. Lee. For what’s most impressive about these current shows is that they are not tokenistic one-time invitations (too common these days), but arise from deep commitments over the long term.

The Dia acquired these major works by Mr. Lee (and by Kishio Suga, another Mono-ha artist exhibited at Dia’s Chelsea space in 2016-17) for the permanent collection two years ago, but waited until now to show them. The museum has also acquired 155 works by Posenenske, both archival and newly fabricated. Ms. Morgan and her team work slowly, without fanfare. Blockbusters are not their thing. But don’t let the hush of the Beacon galleries mislead you; a profound transformation is afoot.

Jason Farago is an art critic for The Times. He reviews exhibitions in New York and abroad, with a focus on global approaches to art history. Previously he edited Even, an art magazine he co-founded. In 2017 he was awarded the inaugural Rabkin Prize for art criticism. @jsf