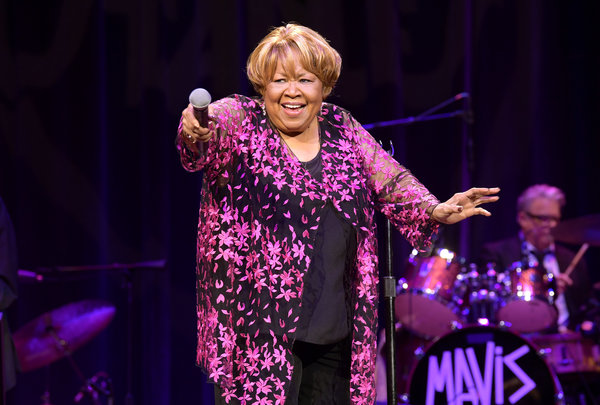 Every Friday, pop critics for The New York Times weigh in on the week’s most notable new songs and videos. Just want the music? Listen to the Playlist on Spotify here (or find our profile: nytimes). Like what you hear? Let us know at [email protected] and sign up for our Louder newsletter, a once-a-week blast of our pop music coverage.

A bare-bones blues shuffle is all Mavis Staples needs to carry her lifelong message — “Things gotta change around here” — in “Change,” which opens her new album, “We Get By.” The song and album are written and produced by Ben Harper, and it’s a magnificent collaboration all the way through. His guitar is lean and raw enough to be her partner, and gospelly backup vocals arrive just where they should, and her deep, unbridled voice brings righteousness, power and experience to every word. JON PARELES

“Gloria” from the third Lumineers album, due in September, has the guitar-strumming, major-chord drive of other Lumineers songs. But it sketches a grim story line about alcoholism, addiction and destroyed lives. “Gloria, they found you on the floor,” Wesley Schultz sings, and later, “Gloria, there’s easier ways to die.” Its video clip — part of a series turning the album’s songs into a narrative — is jolting and unsparing. PARELES

Steve Lacy — the 20-year-old guitarist and producer for the Internet and a recent collaborator with Solange, Blood Orange and Vampire Weekend — is largely a one-man studio band on his debut album. The album’s grand statement is “Like Me,” a nine-minute suite about coming to terms with his bisexuality: “I just want to relate to everyone,” he explains. He sets up a clattering, dissonant vamp; he has the phrase “I really wonder” ricocheting all around; he sings, “How many others not gon’ tell their family?/How many scared to lose their friends like me?” And before the nine minutes are over, he allows himself long silences and two other distinct song fragments: one about crying unheard, one a slow-jam meditation on the words “hear love fade away.” Whether he finds self-acceptance is an open question. PARELES

Hollow grunge guitar chords and a stolid, noncommittal hip-hop beat accompany Clairo as she details the way a breakup can — too late — clarify things: “Can you see me using everything to hold back?/I guess this could be worse, walking out the door with your bags.” The bitterness accumulates, line by line and beat by beat, low-fi instruments coming and going like waves of anger, calculation and desperate self-preservation. “Pardon my emotions/I should probably keep it all to myself, knowing you’d make fun of me.” PARELES

Shabazz Palaces’s Ishmael Butler plays the Pied Piper’s role on this quick and potent track from “Flamagra,” Flying Lotus’s first new album in five years. He pulls us down a dark path with cryptic prophesies and the allure of some lingering danger; the tin-can clop of a West African beat and Thundercat’s spare, thrifty bass playing help nudge us along. But underneath it all, Butler’s abstruse verses offer glimpses at salvation, and he finishes on a hopeful note: “A golden glow that’s so passionate, styles dash, we so casual/Dash past the imam, black limb is transcendent/Broke minds mended, it’s the genesis.” GIOVANNI RUSSONELLO

Seratones, ‘Gotta Get to Know Ya’

Seratones, a rock band from Shreveport led by the guitarist and singer A.J. Haynes, applies 21st-century sonic armament to its garage-rock foundations on “Gotta Get To Know Ya,” a demand to “Turn up, turn on to me” and a promise that “Baby gonna feel the heat.” The fuzztone is cranked way up, Haynes’s bluesy vocals are multiplied, synthesizer tones wriggle here and there, and the drums are overloaded with distortion in what sounds like a programmed version of a mid-1960s stomp. It’s not roots-rock anymore. PARELES

Emeli Sandé’s latest urgent affirmation — “You deserve peace of mind, you deserve all the laughter/You are one of a kind, you deserve happy ever after” — doesn’t let the earnestness of her voice rule the music. The solemn piano chords that start the song, joined by strings that raise the tension for a full opening minute, make way for a Latin-tinged dance beat harking back to prime 1980s Michael Jackson. Instead of bearing down, the track lifts off. PARELES

Both of these drummers are in their late 50s, each boasts a hard-charging, wall-shaking style, and they both have new albums out today. In the 1980s Peterson was apprenticed to the straight-ahead jazz icon Art Blakey, while Weston was the youngest member of Prime Time, Ornette Coleman’s renowned bizarro-funk outfit. On “Legacy: Alive Vol. 6 at the Side Door,” Peterson gathers fellow Blakey alumni for a tribute to their former boss, including this 12-minute, gallivanting workout on “Blues March.” Weston, meanwhile, keeps the spirit of Prime Time alive on “Dust and Ash” with his manic, nearly danceable playing. But his pairing of a jazz-rock fusion four-piece and a string quartet yields something spacey and explosive and distinct, especially on the title track. RUSSONELLO

The solitude is palpable in “Lonesome Pine”: in its sparse handful of guitar notes, in the fitful rustle of its brushed snare drum and in the age-old imagery. The singer has been sleeping in a cold, windy, starless forest, “wishing that you were mine,” realizing that he “never felt so alone.” Chance McCoy plays banjo, fiddle, guitar and other instruments in the bluegrassy jam band Old Crow Medicine Show, but this song, from a coming solo album, depicts more private meditations. PARELES

“Don’t get me alone with my thoughts/’Cause I lost my reason,” sings Shannon Carey, who records as Luray. “Dig,” a ghostly waltz, is where introspection can carry her: from banjo picking to distant roaring electric guitars to glimmering thumb-piano plinks, from isolation to sweet intransigence. “Hard to admit when I’m wrong,” she sings. “I learned it from you.” PARELES

It’s getting harder to pin Aldana’s sound down to any particular set of influences. Yes, there’s a lot of Mark Turner in there, and heavy dashes of Joe Henderson and Sonny Rollins, but with each passing year, this young tenor saxophonist is sounding more like herself. On “Acceptance,” she rides a front-loaded rhythmic pattern from the bassist Pablo Menares, chasing stability over shifting ground. It’s a good setup for Aldana, whose self-assurance on the saxophone knows almost no limits; she rises to the challenge of volatility. The track comes from “Visions,” an album of new music inspired by the life and work of Frida Kahlo. RUSSONELLO

An earlier version of this article misstated the surname of the Seratones' guitarist and singer. She is A.J. Haynes, not A.J. Hines.

Jon Pareles has been The Times’s chief pop music critic since 1988. A musician, he has played in rock bands, jazz groups and classical ensembles. He majored in music at Yale University. @JonPareles