We are facing a special challenge in the pandemic era: How do we mourn death at the scale we are witnessing it? In a new exhibition, the Canadian artist Divya Mehra offers a surprising and timely suggestion: big fat emojis.

“The funny things You do” at Night Gallery in Los Angeles (through March 13), includes just one work, but it’s a whopper: Nearly 20-foot-tall inflatable versions of the wave and urn emojis, expressive of a “tsunami of grief”; when the exhibition opened in mid-January, two million had died from the coronavirus.

The mind balks at that number but the show’s evocation of devastation deals partly with Mehra’s mourning of one: her father, Kamal, who died in 2015. He founded Winnipeg’s first North Indian restaurant in the 1970s; it remains a fixture there. The artist, 39, was reticent to talk about him in an otherwise wide-ranging two-hour Zoom conversation from her home there. But she did say, “Those two emojis have taken up so much space for me over the past few years.” 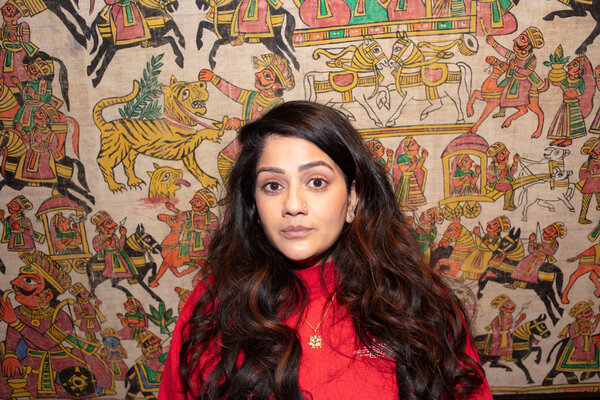 This is the first solo show in the United States for the artist, who was shortlisted for the National Gallery of Canada’s $100,000 Sobey Art Award in 2017. Her exhibition also builds on exposure in group shows at MoMA PS1, the Queens Museum and Mass MoCA’s groundbreaking 2012-13 show “Oh, Canada: Contemporary Art From North North America.”

The show’s title refers to “America’s Funniest Home Videos,” whose theme includes the lyrics, “You’re the red, white and blue / The funny things you do / America, America, this is you.” It’s hard not to think of government mismanagement of the pandemic as one of the “funny” things America does, Mehra implies.

“Divya uses a sense of exuberance to process grief,” said Davida Nemeroff, the owner of Night Gallery, in a recent video chat. “That’s where the art is.” It’s also in the multivalence of her symbols: A pair of inflatables echoes the inflatable human organs, the lungs, that Covid-19 ravages, even as the wave emoji recalls Katsushika Hokusai’s “Under the Wave off Kanagawa” (ca. 1830). Emoji imitates art, art imitates emoji. It echoes the language of successive “waves” of the disease, too, as well as talk of a political “blue wave” that swept Democrats into power in the U.S.

And if using emojis to express profound sorrow makes you wince, that’s exactly the boundary she tends to push. “Grief flows very easily into anger and disdain, and creates a soft and radical rage,” the artist said in a video montage created for the Sobey Award website; we then see her dropping an ice cream cone, followed by the sound of an air horn blast, and the words “lol nothing matters” appear on the screen.

The name of the emoji work — its full title is “here at least we shall be free (build yourself a Taj Mahal for common folks OR a simple set for funniest home video)” — alludes to the Taj Mahal, that great work of Mughal architecture, which also resulted from mourning. It’s a mausoleum built by a Mughal emperor grieving his favorite wife (so beautiful that the court poets said “the moon hid its face in shame before her”).

In an earlier work, she offers her own miniature version of the Taj Mahal, transformed into a bouncy castle. It functions, she told me, “as an absurd and complicated symbol for racialized individuals in the white cultural imagination.” It also mocks the way a mausoleum becomes a playground for tourists.

Other works also deal with Mehra’s personal bereavement as a jumping-off point. A 2016 show at New Gallery in Calgary, Alberta, included a conceptual portrait of her father consisting of the mangled base of a sculpture of Ganesh — the Hindu god of new beginnings — which had stood at the entry to one of the family’s restaurants and was sawed off by thieves after her father died. The work, “We are obliged to learn life’s inevitable lessons and they are not easy,” is a poignant depiction of racial violence.

A recent commission played with the catastrophic loss Covid-19 has brought about. Stuck at home, the artist was making drawings that riff on the cartoonist Skip Morrow’s 1983 book “The End,” which she discovered as a child, in which white people engage in various activities — getting married, burying their heads in the ground, hoarding money — oblivious to mushroom clouds rising in the distance. Kim Nguyen, head of programs at the CCA Wattis Institute in San Francisco, commissioned Mehra to turn the drawings into postcards in a work called “The End of You.” The key players are people of color in service jobs; they’re the only ones who see the end of the world. In the postcard that arrived in my mailbox recently, a waiter distracted by the distant mushroom cloud spills wine as his customer barks, “A little HELP!”

“The world is ending,” Nguyen said, “and white people want to just go on with their lives. It’s so violent.”

Like many artists of Mehra’s generation, she is omnivorous with regard to medium, working in sculpture, performance, writing, video, sound, and other modes. Her work often brings a cuttingly comic voice to the subject of racism.

While earning an M.F.A. in 2008 at Columbia University, she learned from Kara Walker about making art as a woman of color (including borrowing characteristically discursive titles).

Mehra’s piece “The World Isn’t a Fair Place: Just Barely Adrift on your perceived Cultural Landscape (The Browning of America and the Color of Crime),” an example from 2018, is an eight-foot-tall inflatable version of Edward Said’s classic post-colonial book “Orientalism.” She and Nguyen “would often joke that when you’re speaking about identity politics, it’s immediately characterized as though you’re bringing a great weight to the table,” she said, explaining the work’s inspiration.

In one work at a 2020 exhibition, she pursued the ramifications of identity within the kinds of institutions where she routinely exhibits her work. Preparing for her show at MacKenzie Art Gallery in Regina, Saskatchewan, the artist said she discovered records indicating that the collector and lawyer for whom the museum is named, Norman MacKenzie, had arranged for an 18th-century Indian sculpture in the collection to be stolen from an active Hindu temple.

When the director agreed to repatriate it, Mehra said she replaced the work with her own artwork depicting a bag of sand, like the one Indiana Jones used to replace an idol the film hero swiped from a booby-trapped pedestal. (The MacKenzie’s executive director, John. G. Hampton, confirmed the veracity of Mehra’s research).

And isn’t that what so many museums have become, Mehra seems to be saying? Booby-trapped pedestals whose artworks are cries for repatriation?

Isolated in the middle of Canada, unable to travel to Los Angeles for her show, Mehra has, with the collective Asian Brain Trust (whose other members are Nguyen and the critic and organizer Amy Fung), been creating online stores with names like “Bad Society” to move their ideas into the world despite the lockdown. The concepts travel on totes and mugs branded with messages like “employment is humiliating.”

One store offers items for up to six figures; they are represented, humorously, with slapdash line drawings. Even there, the subject of death is treated with acid wit. A ham sandwich for 100 Canadian dollars. A jar of mayonnaise, $7,500. A shovel for $500, with the suggestion: “Dig your own graves!”