Prince Harry and Meghan, Duchess of Sussex have had quite the year – they tied the knot in a fairytale wedding, embarked on a world tour and welcomed their son, Archie, into the world and straight into our hearts. But, in case you’ve been living under a rock and missed any of the action, Lifetime’s got you covered.

The network is releasing Harry & Meghan: Becoming Royal, the sequel to the hit film Harry & Meghan: A Royal Romance, which chronicles the newlyweds’ first year of marriage and the joys and challenges of blending their families and cultures. Tiffany Smith had the honor of playing the coveted role of the Duchess of Sussex, and sat down with SheKnows to talk about preparing for the film before it airs on Lifetime on May 27.

In the interview, the actress opens up about being mistaken for the Duchess of Sussex in real life – sporting mermaid print leggings in front of the palace, her favorite scene from the film (spoiler alert:it’s not the wedding) and what she would do if she heard from Meghan after the film airs.

SheKnows: Before we talk about the film, I want to get your thoughts on the newest royal addition, little baby Archie.

Tiffany Smith: I was so excited like everyone else because when we filmed the movie it was obviously before the baby was born and we were like, “Is the baby going to be born by the time the movie comes out?” There was definitely a text chain between the producers and director and I like, “Oh my gosh, the baby was born. What’s his name?” I just loved seeing them together and obviously Harry’s speech that he did when he came out in the morning was so cute and the fact that he thanked the horses was probably my favorite part.

SK: Harry and Meghan: Becoming Royal premieres in less than a week and you get to play the coveted role of the Duchess of Sussex. What was your favorite part about playing the role?

TS: There are so many things I loved about getting to do this film. It was just an incredible experience getting to be in Vancouver for a month and really getting to know everybody on the cast and crew. I watched the first film and there’s a moment in there where the makeup artist — his niece comes to meet Meghan — and he’s like, “She’s just never seen someone who looks like her that could be a princess.” And that moment resonated so much with me. I think the best part was getting to really highlight how wonderful it is to get to be multi-ethnic and be proud of that and just kind of embrace that side of myself even more than I have like Meghan does. 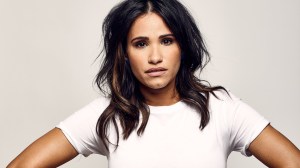 SK: Did you have formal royal etiquette training for the role? If you didn’t, how did you prepare for the role?

TS: There wasn’t anything official for the movie but I love learning and it’s one of my favorite things about acting is that you get to do deep dives into whatever character you’re going to play. I think when you’re playing someone who is real, there is just like a certain way that I smile, or certain things that I do, and Meghan and everyone has them, but I wanted to really pick some out that I felt like were very Meghan and do as much research as I could. I think because I researched so much before, for me, it felt really natural — the stuff that felt a lot like her.

The royal things like making sure you cross your legs the right way, and the wardrobe and stuff — that was all stuff that our lovely costume designer Flo really handled so I didn’t have to stress about that sort of thing. Once you get in the clothes, it just kind of naturally comes from you — you’re not really going to behave like you would if you were in yoga clothes, which is me a lot of the time.

SK: Can you give us a glimpse of what it’s like to be a royal?

TS: I mean I can give you a glimpse into what it’s like playing a royal in a movie because it’s one of those things where the scale of what Meghan and Harry and all of the royals’ experiences are so different than anything I can even imagine. For our movie, what I wanted to really highlight and bring out was that this is a big undertaking, it was a big decision that she made to become part of this family and take on the things that are expected and are really lovely about the Royal family. For me, and I think the writer and director, we wanted to make sure that it was really important to show that yes, she came from a different world and she’s moving into this other world, but the most important thing was staying true to who she is and finding a balance of the wonderful parts of both sides. 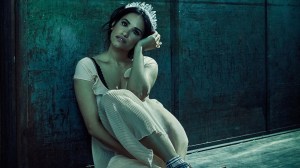 SK: Did you have a favorite scene in the movie?

TS: Oh gosh, there were a lot I really liked. I think one of the really fun scenes we shot was Meghan first getting back and seeing Harry again for the first time in a bit. She wakes up in the middle of the night to do some work and stuff so it was just this really beautiful kind of small dynamic about what their relationship possibly looks like behind closed doors. I don’t know exactly what it looks like, but in my mind and the way I felt doing the scene, it just felt really lovely and beautiful where you’re just like, “Yeah, they are just a normal couple” in so many ways and obviously they have a lot of abnormal things on top of it.

SK: Did your friends and family ask you for the inside scoop on the royals’ lives or secrets when you were filming and reading the script?

TS: I feel like my parents – I talk with them about everything so there weren’t really any secrets – if I tell them, they know that it stays here. My friends were just really excited because whenever I could send photos, they were like, “Oh my gosh, we can’t wait to see them.” I think the biggest thing was I didn’t really send anything until the first look came out. It was really great because the movie and filming process happened so much more quickly than it does a lot of times, so I didn’t really have to keep things secret for too long – at least the photos.

SK: Because you do resemble her so much, do you get approached by people all the time in person asking if you are Meghan?

TS: When they first started dating I did a lot more than I do now – and it was never, “Are you Meghan Markle?” Well, one time it was. But usually it’s just like, “Do you know who you look like?”

I was actually working in London and I think this was before they got engaged or right around when they got engaged and I was training for a half marathon. I was running in Kensington Park and I was in my LA Dodgers baseball cap and mermaid print leggings. I’m running and I get in front of the palace and was like, “Oh, I should ask someone to take a photo for me.” So I asked a random passerby to take a photo and he was like, “I’m sorry, but are you Meghan Markle?” I hadn’t even put two and two together that like, “Oh, this is where they live now.” I just started laughing because the idea that she would go for a run in the park and then ask somebody like, “Hey, would you mind taking a photo of me in front of my new house?” was just so funny. 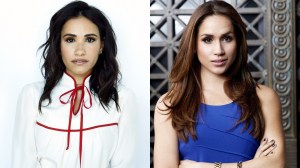 SK: What would you do if you heard from the Duchess of Sussex after the film premieres?

TS: I would be really excited. I would hope that if I got to talk to her that she would just be able to say that she saw it and watching the movie brought her joy because that’s what I want to do as an actor is bring people joy and happiness and to feel uplifted. I would probably tell her thanks because I feel like it’s really cool to get to see somebody who is pursuing her dreams and her ideal path and the love of her life, and I think that for a lot of people, especially for me being multiracial, it’s really cool to get to see somebody doing that.

SK: Do you think there will be a trilogy?

TS: I don’t know! You’ll have to ask Lifetime about that one! Hopefully everybody really enjoys this one as much as they did the first one and then we’ll see where it goes.

SK: What’s next for you now that the movie has wrapped?

TS: My focus right now has really been on getting ready and promoting this film because it happened so quickly. But, I booked another guest starring role on a comedy which I can’t say what it is just yet, but I’m continuing to audition and working and I’m excited to see what my next adventure will be.

SK: Is there a specific role you would like to take on next?

TS: There’s a couple of shows that I would love to be on. I love Umbrella Academy; I love Killing Eve. I’m a huge comic book fan so a dream role for me down the line would be to play Zatanna which is a DC Comics character. So, fingers crossed, all of those things are on my vision board so we’ll see what happens.

This interview has been edited for style and length.