As recently as March, Brandon Cardley’s work as the Boston Symphony Orchestra’s video engineer was largely limited to small projects, like cutting clips of concerts for social media and marketing materials. But once the coronavirus pandemic’s spread started to cancel performances through summer and fall, then winter and spring, his job suddenly looked a lot different.

“We went from being a nice addition to the concert to being the concert,” Mr. Cardley said in an interview. “We became a television studio overnight.”

It’s an increasingly common story among American orchestras. Crowds of listeners gathering in front of crowds of musicians has been all but impossible, so ensembles have rushed to replace in-person performances with online programs — often well produced and sometimes more daring than the live concerts that had originally been planned. In the process, media departments, now much more than promotional supplements, have been the linchpins.

Before the pandemic, classical livestreams in the United States were rare, though not entirely absent: For example, the Detroit Symphony Orchestra has, in recent years, made its exemplary programming widely accessible. But ensembles abroad have a richer online history. The Berlin Philharmonic entered lockdown with a well-established library on its Digital Concert Hall platform, and many performance spaces throughout Europe have long been capable of mass dissemination. 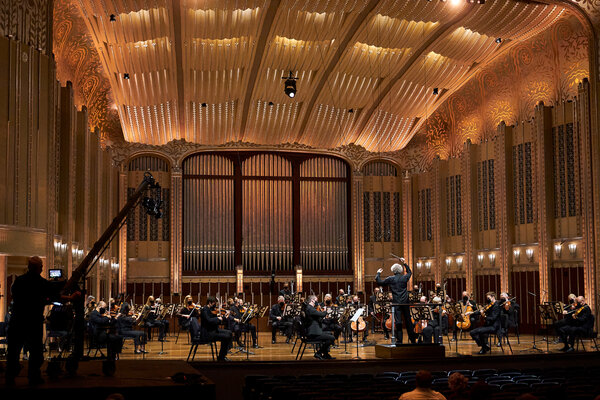 Those filmed concerts and operas, however, have been, by and large, straightforward documents of a performance — shot with multiple cameras, yes, but still following the rhythms of a typical program. This year, American orchestras (at least those with the resources) have tended to aim for something more suited to an online medium, while also adapting to pandemic restrictions: shorter evenings and smaller-scale works, broken up by interviews and news magazine-like features, all with a cinematic spirit.

“What we have to make sure is that in the streaming world, it’s also an intense experience,” said Franz Welser-Möst, the music director of the Cleveland Orchestra, which started the platform Adella in October. “I’ve watched plenty of concerts filmed, which if you’re a nerd, it’s fine. But for a normal audience, it’s maybe not that interesting.”

The Detroit Symphony was well prepared for the circumstances of this fall; Erik Rönmark, its vice president and general manager, said that it had been producing video offerings for almost a decade, with the most recent leaps of development overseen by Marc Geelhoed, the director of digital initiatives. At many other major orchestras, though, an operation like this was more of a long-discussed ambition, which this year became reality at a speed rarely seen in an industry that changes at a notoriously glacial pace.

But the likely alternative was closure and a full retreat from the public. Mark Volpe, the president and chief executive of the Boston Symphony, said that during the 1918 flu pandemic, the orchestra lost only several weeks of concerts. This time, audiences will be out of Symphony Hall for over a year. The musicians have been able to gather onstage, though, to film performances made possible by relatively recent investments in media staff — such as the hiring of Mr. Cardley in 2017. (These streamed programs were directed by Habib Azar.)

In Boston and elsewhere before the pandemic, if someone like Mr. Cardley was involved in filming an entire work or concert, it was usually for archival purposes. (Some of those videos have made their way online in recent months; the New York Philharmonic, which hasn’t been able to assemble at Lincoln Center, posts them regularly on Facebook.) Mr. Volpe said that very quickly, it was clear that those weren’t the types of videos the Boston Symphony should be releasing this fall.

The question of how to produce a concert for the (very) small screen has led to a variety of approaches — in programming and cinematography — and welcome adventurousness. The San Francisco Symphony, a pioneer in commissioning Nico Muhly’s “Throughline” for a strictly virtual medium, has filmed its musicians both in the hall and in the streets, making literal that perennial goal of integrating orchestras with their communities.

Detroit primed its viewers for a Tyshawn Sorey premiere with a conversation featuring the composer. Episodes of the Los Angeles Philharmonic’s “Sound/Stage,” filmed at the open-air Hollywood Bowl, are really immersive websites accompanying concert films, like one that wove music into a poetic discussion about finales between the conductor Gustavo Dudamel and the filmmaker Alejandro G. Iñárritu.

“Capturing concerts is not compelling,” said Chad Smith, the Los Angeles Philharmonic’s chief executive. “The content we’re creating for our space has to reflect the production values of L.A.”

Taking such a leap into sophisticated media production during a pandemic — in which orchestras stand to lose tens of millions of dollars in revenue, leading to layoffs and pay cuts — has required adaptability. Money, often provided by donors, has been spent to outfit concert halls with more cameras, but most of the work has been done with existing staff, sometimes filling new roles: In Detroit, a librarian trained in conducting was recruited to follow the score for cues during filming.

Gone, in the world of streaming, is the typical timeline for a performance. A traditional subscription concert, for example, may have been preceded by a few days of rehearsal; then, once the musicians took their bows, it was over. Now there is more work before and after. In the extreme case of “Throughline” in San Francisco, the program took thousands of hours to make.

Features, like interviews with artists, are filmed and edited in advance. For the performance itself, Mr. Geelhoed, the digital initiatives director in Detroit, spends up to five hours studying a score before blocking the camerawork. Michael Vendeland, the director of Cleveland’s concert series In Focus, which streams on Adella, uses a spreadsheet to map out his shots — as many as 500 for a single concert.

As in an album recording session, microphones have to be optimally placed and leveled before taping begins. Don McClung, the founder of Digital River Media and the producer of Cleveland’s In Focus, said that he was working with an “audience first” mentality, which to him inherently meant “audio-driven.” The orchestra has brought on Elaine Martone, a Grammy Award-winning luminary in the field of audio production, because, Mr. Vendeland said, “a stream of the Cleveland Orchestra that doesn’t sound like the Cleveland Orchestra is useless.”

Planned shots, along with audio levels and lighting, are refined during rehearsals. The way a moment was initially framed, for example, might be disrupted by social distancing onstage; six feet between players can create unattractive empty space. But stages have been outfitted to manage problems like this more easily. At Symphony Hall in Boston, the stage was extended by 35 feet, creating more room for both the musicians and the cameras.

By filming throughout the hall, with no audiences to inconvenience, video crews are able to capture angles spectators rarely see; in Cleveland, the views of Emanuel Ax’s fingers at the keyboard playing Haydn, or of Yefim Bronfman’s in Schnittke’s Concerto for Piano and Strings, are alone worth the price of admission. It can be fascinating to watch conductors, physically distant and partially obscured by face masks, find new ways to get their intentions across to players.

Kim Huynh, the San Francisco Symphony’s senior video producer, said that for her, “the word ‘cinematic’ is key.” The Los Angeles Philharmonic’s concerts take a high-energy approach, with frenetic editing that never lets a shot linger for more than a few seconds. In Detroit, where performances are streamed live, Mr. Geelhoed insists on the camera as a complement to the music.

“You’re trying to tell the story of the piece,” he said. “You have to figure out how to tell that story visually. So you’re not going to shoot a piece by Tyshawn Sorey the same way you would Dvorak.”

That Sorey work, the recent premiere “For Marcos Balter,” featuring the violinist Jennifer Koh, was filmed with soft lighting and long, slow-moving shots that echoed the score’s shifting textures. “The viewer should be able to sense it,” Mr. Geelhoed said, “but they should never notice it.”

Many orchestras have wound down their virtual performances for the fall, but plan to return after the start of the new year — with lessons learned from the first months. There are not just aesthetic questions to consider. Is there a way for them to make money? Should they be presented on a proprietary platform like Cleveland’s Adella?

One tool may help administrators arrive at an answer: analytics. Mr. Volpe of Boston said with a chuckle that through streaming, he has learned that a lot of people really just want to fast-forward to the famous Largo of Dvorak’s “New World” Symphony. Mr. Smith of Los Angeles said that “Sound/Stage,” which shines on a desktop screen and was produced to impress audiophiles, was actually being seen mostly on smartphones and tablets.

Regardless of what changes come next, however, orchestra leaders are treating virtual performances as something more permanent than a mere pandemic substitute. Imagine concerts conceived and distributed independently of traditional subscription programs, or premieres broadcast worldwide. Media departments, in other words, are going to stay busy.

“Our digital platform is not a bridge,” Mr. Smith said. “If we’re doing our jobs right, this will become its own element of all our work going forward.”