AT&T, Dish Network, Hulu, YouTube, and Sony are all battling it out over cord-cutters who are ditching traditional-TV services, and looking for cheaper alternatives online.

By 2022, two services could grab enough US market share to emerge as the clear leaders in streaming TV, analysts at UBS projected in a research note on Jun. 6.

Hulu and YouTube’s live-TV services are the most promising virtual TV providers, according to the analysts. A separate report published this week by Credit Suisse also projected rapid growth among the two streaming services. 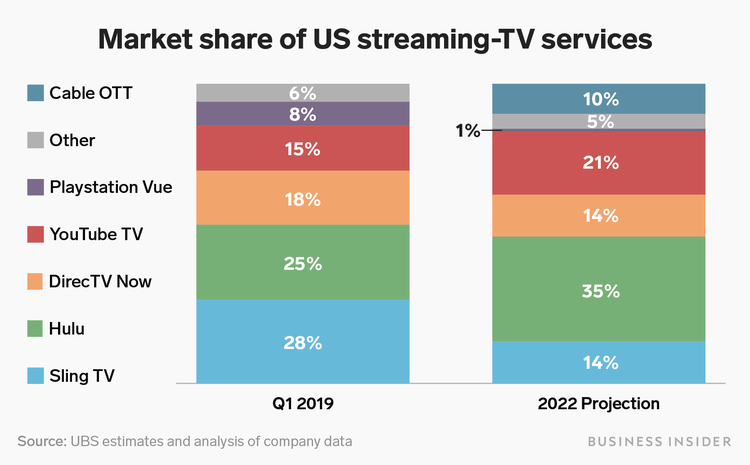 Currently, Dish’s Sling TV has the biggest market share with 28%, which UBS estimated will shrink to 14% by 2022.

Hulu Live and YouTube TV arrived somewhat late to the internet-TV war. They both launched in 2017, following the debuts of Sling TV and Sony’s PlayStation Vue in 2015, and AT&T’s DirecTV Now in 2016.

In the past year, many of the internet bundles, including Hulu Live and YouTube TV, have been forced to raise prices or alter their packages to keep up with the costs of programming and move toward profitability.

Read more: A rough quarter for traditional TV shows how the plan to fight Netflix and save the bundle is failing

Hulu was estimated to have 2.1 million live-TV subscribers as of the first quarter of 2019, up from 600,000 the same period a year earlier. YouTube TV also grew 230% to 1.2 milion subscribers in that time, Credit Suisse estimated. By comparison, Sling TV grew about 5% and DirecTV Now grew 3%.

By the end of the year, Credit Suisse forecasted that Hulu will be the largest virtual bundle by subscriber base, with 3.36 million subscribers — 851,000 more than its next largest competitor, Sling TV. YouTube TV is also expected to reach 1.9 million subscribers, putting it in third place.