THE NAME OF THE ROSE 10 p.m. on SundanceTV. With “Game of Thrones” having heaved its last breath of dragon fire on Sunday, many have been left looking for a new series to fill the sword-shaped void. One holier option is this medieval mystery mini-series, the adaptation of Umberto Eco’s best-known novel, “The Name of the Rose,” by the Italian director Giacomo Battiato. The book, which came out in 1980, sold millions of copies, and was the basis for a 1986 film adaptation with Sean Connery. The role Connery played, a Franciscan friar named William of Baskerville, is here played by John Turturro. The plot involves mysterious deaths at a remote abbey. When the Connery movie came out, Vincent Canby said in his review for The New York Times that it had cut out the novel’s scholarly asides, which “cover everything from the political maneuvering within the Avignon papacy, the fight for the Holy Roman Empire and the church’s merciless suppression of heresies (Waldensian, Albigensian and Catharist, among others) to the invention of eyeglasses and gunpowder.” The mini-series format might make room for more of Eco’s embellishments onscreen.

MEN IN BLACK 3 (2012) 8 p.m. on FX. After lying dormant for most of the decade, the “Men in Black” series is set to return next month via “Men in Black: International,” with Tessa Thompson and Chris Hemsworth. This previous installment put Tommy Lee Jones and Will Smith back in suits and sunglasses a decade after “Men in Black II,” with the pair reprising their roles as government agents pitted against aliens. The mission here involves a cosmic supervillain played by Jemaine Clement, whom Smith’s Agent J chases back in time. “Even as the movie carefully fulfills its blockbuster imperatives — with chases and explosions and elaborately contrived plot twists — it swerves into some marvelously silly, unexpectedly witty and genuinely fresh territory,” A.O. Scott wrote in his review for The Times. 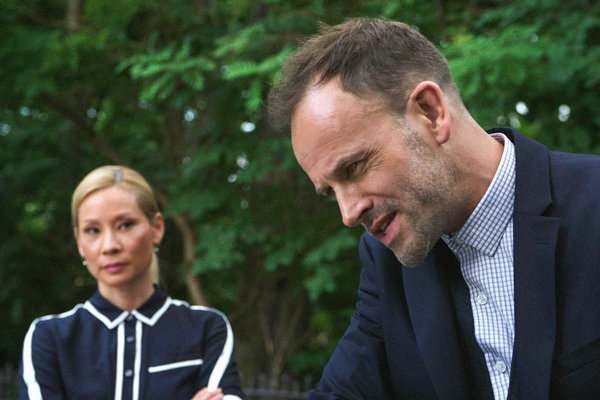 ELEMENTARY 10 p.m. on CBS. After seven years, this modern updating of Sherlock Holmes is ending with a seventh and final season, which kicks off Thursday night. Jonny Lee Miller plays a version of Holmes, who at the start of the series was a recovering drug addict. Miller acts opposite Lucy Liu, whose character is a reimagined Watson. The show is a dark police procedural, with more than a sprinkle of Arthur Conan Doyle.

RIVERDALE Stream on CWTV.com and Netflix. This moody take on the Archie Comics universe has helped make its creator, Roberto Aguirre-Sacasa, “an auteur of moody, sexy teen angst,” Alexis Soloski wrote in The Times last year. Its third season brought back Archie (K.J. Apa), Betty (Lili Reinhart), Veronica (Camila Mendes) and the rest of the gang for more noirish teenage debauchery. The season hits Netflix on Thursday, about a week after its finale was broadcast on The CW.