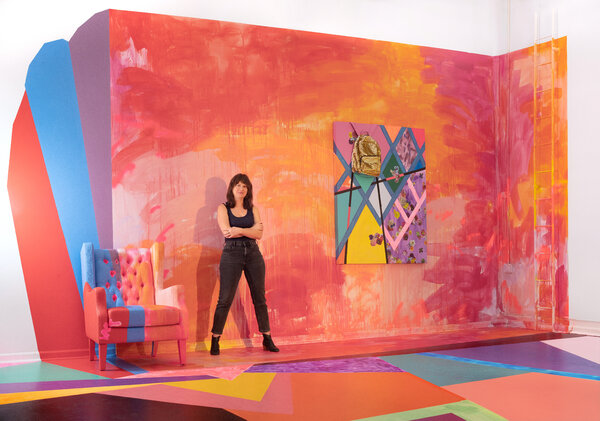 LOS ANGELES — Last summer, the painter Sarah Cain was contemplating the biggest project of her career: a 45-foot-long painting for the East Atrium of the National Gallery of Art, in Washington, D.C. Cain, 42, has been making caustically colorful, improvised abstractions since the mid-2000s and had been commissioned to hide construction walls during refurbishment of the atrium’s skylight. Nearby sculptures by Max Ernst, Isamu Noguchi and Richard Serra, too large to relocate, were protected by wooden boxes. Cain was tasked with painting on the boxes, too — each bigger than her studio. (And she needed a title.)

Not long afterward, one recent scorching afternoon, I visited the artist in the hilly Los Angeles neighborhood of Garvanza. Cain handed me a mug of iced mint tea. On the side, in jaunty lettering, was that title, borrowed from a meme she spotted on Instagram that made her laugh: “My favorite season is the fall of the patriarchy.”

The critic Quinn Latimer once remarked on Cain’s compulsion toward seemingly “bad ideas,” such as attaching feathers or doilies to the surface of her paintings and drawings. “And I do a lot of crazy titles,” Cain admitted, too. “But I just felt, I won’t get this chance ever again. Why would I shy away from one of the biggest problems in the art world?”

Cain’s paintings trouble received ideas of what serious art looks like. Almost everything about them — their speed, their brashness, their noodling compositions, their splashes and spray-painted scribbles, their tacky accouterments, their sense of absurdity — seems to undermine the gravitas that large-scale painting traditionally projects.

Spend time with it, in the many exhibitions around the country, and it becomes clear that Cain’s art comes out of her contention with some weighty issues: Love, death, spirituality and beauty — mainstream themes in Western art history — raise their heads alongside more contemporary concerns such as gender and wealth inequality. Her approach, says Molly Donovan, the N.G.A.’s curator of contemporary art, “brings the tradition of abstract painting into the present.”

A survey of her work since 2012 is currently on view at the Frances Young Tang Teaching Museum and Art Gallery at Skidmore College, in Saratoga Springs, N.Y. (through Jan. 2), and a solo exhibition of new work just opened at Broadway Gallery in Manhattan (through Oct. 16). “My favorite season is the fall of the patriarchy” will remain at the N.G.A. until December.

At the Tang, Cain painted the gallery’s entire floor, then added sofas, also painted, from which to view the works on the walls. Often, her exuberant marks spill off the edge of the canvas onto the wall or floor, collapsing the category of painting into installation. Other times, wall paintings (she avoids the term “mural”) incorporate canvases, sliced and deconstructed, along with other odds and ends. When she painted a wall beside the new Institute of Contemporary Art, Los Angeles, in 2017, she attached sequined backpacks she’d bought from a store down the street.

Those backpacks, which she retrieved when the piece was deinstalled, reappear on two new paintings in the exhibition at Broadway Gallery. Beads, rope, crystals, paint rollers, shells, twigs, plastic flowers, hula hoops and, in this new exhibition, a bra have featured on the surfaces of her works. Once she spent $5 in a thrift store and came away with a bag of knickknacks, including faux-Hawaiian leis, promising herself that she’d find ways to include it all in a painting. (“It’s so ugly,” she says of the work, laughing.)

“Sarah embraces the very ideas, content and styles that have been marginalized — craft, graffiti, the feminine, the decorative, the domestic,” Jamillah James, senior curator at the Institute of Contemporary Art, Los Angeles, says. “Not only embraces them, but explodes them. She has a completely fearless approach to the medium.”

Somewhat to her bemusement, the response Cain gets most often is that her paintings make people feel happy. “It’s probably because I start from points of conflict a lot,” she says. “By the end, I’ve worked out of that zone. But I don’t set out to make happy paintings.

“I’m so serious as a person, it’s annoying,” Cain says with a smile. “This is probably not a cool thing to say, but I think that if I didn’t paint, I’d be really depressed.”

“She’s a gloriously unsatisfied painter,” says Ian Berry, director of the Tang and curator of Cain’s exhibition there. “She doesn’t repeat herself. She’s always trying to make paintings that no one has seen before, paintings that are a really provocative combination of pleasure and politics.”

Cain first attached cut-glass crystals to her paintings after hanging them in the windows of a “really sweet but super dangerous” house she once lived in, in a gang-ridden area of Los Angeles. “It was this silly New Agey protection thing, but it also made my house look kind of crazy. Like, you didn’t want to break into that window.” Tied to her paintings, crystals and prisms really do radiate in magical ways, with rainbows scattering about the room when light hits them at certain angles.

Since the recession of 2008, she has painted “talismans” on dollar bills, intended to bring money to their owners. “I bought my house off them! I once sold 150 at a fair,” she marvels. “But I really believe in them.”

The conflict in Cain’s work can be traced back to her experience of being a woman in an art world dominated by men. (“My favorite season is the fall of the patriarchy,” it should be noted, was commissioned by the N.G.A.’s first female director, Kaywin Feldman.)

She despairs of the “formats” for artistic genius that the institutions of the art world perpetuate, and the artists who willingly play along. A lot of curators, she says, like to discover an artist in his untidy studio (she keeps hers fastidiously neat) and take these “messy boys” under their wing. “It’s so deep and disgusting to me.”

It is hard, I tell her, not to read the big pink X, painted on one of the sculpture-shrouding boxes at the N.G.A., as a cancellation. Cain responds that it didn’t start out that way: “It’s a fast way to take up space. And that’s something that my work does, but also that you have to do as a lady in the art world. Even if it’s not physical space, you have to push harder or talk louder. And people resent you when you do.”

When she studied at the University of California at Berkeley, she took an impactful feminist theory class with the filmmaker Trinh T. Minh-ha. One session focused on voice, dissecting studies that showed that we are culturally conditioned to pay more attention to deep, loud voices than quiet, higher-pitched ones. Trinh kept her own voice soft and low. “I’m going to retrain you,” Cain recalls her telling the class. “You’re going to have to listen.” I ask Cain if she does that too. “I don’t think I have the luxury to do that,” she replies.

Earlier in her career, she might have given a different answer. While still in the Bay Area (she moved to Los Angeles in 2007) she would enter abandoned buildings or squats, and paint on the walls, knowing that her work would not last. “I really felt that fragility is strength,” she explains. “Making art that feels active instead of dead and preserved forever was really what I was after, and I still am.”

These days, she says, she is looking for ways to make work that will outlive her. In 2019 she completed a stained-glass window commission for San Francisco Airport, and she is keen to do more public art. “I want to do a bronze work. I want to do more stained glass. I want to make things that withstand the elements.”

In other words, she wants to be the artist with work under the big wooden box, not on top of it.