“Theater only feels like an accomplishment if you’re part of the cult,” a character in Jen Silverman’s new novel, “We Play Ourselves,” says. “The rest of the world thinks we’re all wasting our best years.”

The book’s flailing heroine, Cass, an emerging playwright, flees New York after a disastrous opening night. At loose ends in Los Angeles, she drifts toward an unscrupulous filmmaker and the teenage girls in her orbit. Like much of Silverman’s writing, the book balances what Silverman’s colleague, the showrunner Lauren Morelli, praised as a “razor-sharp absurdism alongside a deep reverence for humanity.”

Silverman (“The Moors,” “Collective Rage: A Play in 5 Betties”) started the novel in 2018, having temporarily moved to Los Angeles for a stint in Morelli’s “Tales of the City” writers’ room. Most days, she would arrive at her office an hour or two early and sit at her desk, trying to translate theater’s ephemerality into prose. She thinks she could only write the novel, her first, because theater felt so distant, which acted as a kind of deprogramming.

“The book began as a love letter to the theater,” she said during a recent video call. “But it’s a love letter where you know the dark side. It’s not an idealized love.” 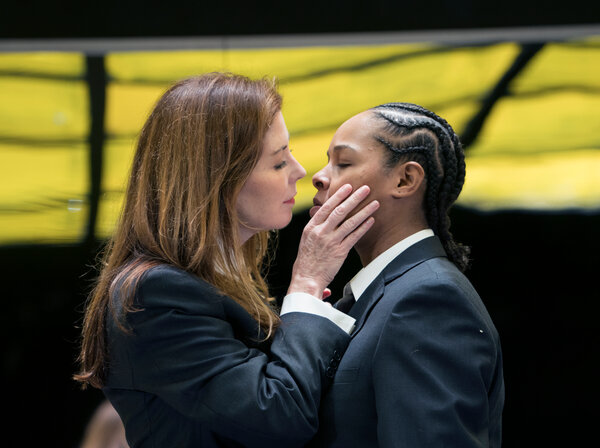 In addition to plays, teleplays and now novels, Silverman also writes poems, essays and short stories. (She denies being prolific, which is funny.) Across genres, her style is mutable, her word choice precise, her interest piqued by tales of transformation and how people do and don’t resist it. The director Mike Donahue, a frequent collaborator, said that he admires her work because he never knows the form it will take. “It’s always an entirely new world to try to crack and a new language to understand,” he said.

Speaking from the Upper Manhattan apartment that she shares with her partner, the set designer Dane Laffrey, Silverman discussed art, autobiography and what it means for the book to arrive in a world without theater. “It’s hard because I want so desperately to be back in a theater,” she said. “But when I think about hearing somebody three rows behind me cough, like, I feel this cold panic.” These are edited excerpts from the conversation.

It’s the best pandemic I’ve ever had. I’ve been working on the book. I got galleys for it in April. It felt a little crazy, because the world was on fire and I’m trying to decide between a semicolon and a comma. And I’ve been reading a lot. That’s saving my sanity. Maybe.

How did this book come about?

I had been writing a different book. But something about being in L.A. and being plunged into a different medium, I longed for theater, like in a visceral, full-body way. And I found that when I would sit down to write, I would just start writing about theater. I ended up calling my editor and saying, “I’m writing a completely different novel. I hope that’s OK.”

Do you think that people outside the theater understand theater?

How autobiographical is the novel?

The part that feels really aligned with my personal experience is the way that theater became something so much larger than a career, that it took the place of a spiritual life. Cass longs for it and needs it in a way that was a really personal, active thing for me. But there are a lot of divergences and one of them is Cass’s hunger for visibility and acknowledgment and her desire to be famous. Attention makes me really nervous, to be honest. So I found it really interesting to follow a character who desperately wants to be a public figure and whose sense of self is constructed around what is being said about her.

Like a particular ritual or ceremony that we’ve all agreed to participate in. From the gathering of the crowds to the party. Then there’s a judgment that’s going to come down and what will that judgment be? Depending on whether you’re a writer who reads reviews, that judgment can feel different, but it’s like running a gauntlet.

Are the parties fun at least?

I’m shy. Crowds scare me. I was not cut out for like a life of extroverts. I try to bring a friend who is an extrovert, and then just watch them thrive in this company of humans.

Do you read reviews?

I’ve gone back and forth. There was a time when I was like, “I’m not going to read reviews.” Then I was like, “No, there’s a lot to learn, I don’t have to agree with it. But I should learn.” At this point, there are a set of critics that I find really smart, thoughtful, nuanced, complex. I don’t always agree with them. They don’t always say good things about me. But I always want to know what they’re saying.

In the novel, the theater world is rife with professional jealousy. Is that your experience?

Still, the book makes theater seem very sexy. Is it?

It can be. What interests me is that it’s a really intimate place. No matter your role, you are performing essentially a mind meld in a really rarefied, intensified environment. Some of my closest friends, people who are family, are people I met doing shows.

Cass has a nemesis in Tara-Jean, a younger playwright. And she falls for a TV star and an elegant director. Are these based on real people? Did you worry that readers would think so?

I did have a moment of real anxiety about it. It is very much fiction. I had theater friends read it. A few of them actually called me after and they were like, “I didn’t know you knew this person.” But each of them had a different person. I’ve heard five different theories for who Tara-Jean is.

What does it mean to have this novel arrive in a world largely without theater?

I have no idea. I thought it was a different world that the novel was going to be entering. For myself, I have dreams almost every other night about theater. Sometimes it’s my play; most of the time it’s somebody else’s play. Sometimes the dream is really good. And sometimes, I have this feeling of like, “Wait a minute, aren’t we in a pandemic? Where’s my mask?” But because my longing for theater is such a big part of my life, I’ve been really enjoying reading about theater. I hope that this book can be that for other people.