In light of Queen Elizabeth’s sad passing, Kate Middleton, formerly known as The Duchess of Cambridge, has taken on the role of the Princess of Wales.

The new princess is loved for her elegant dress sense as well as her caring nature – just as the late Princess Diana and former Princess of Wales was. While Kate never met her mother-in-law, she shares many similarities with her when it comes to her personal style and there have been several times over the years when her fashion choices appeared to pay tribute to the People’s Princess. 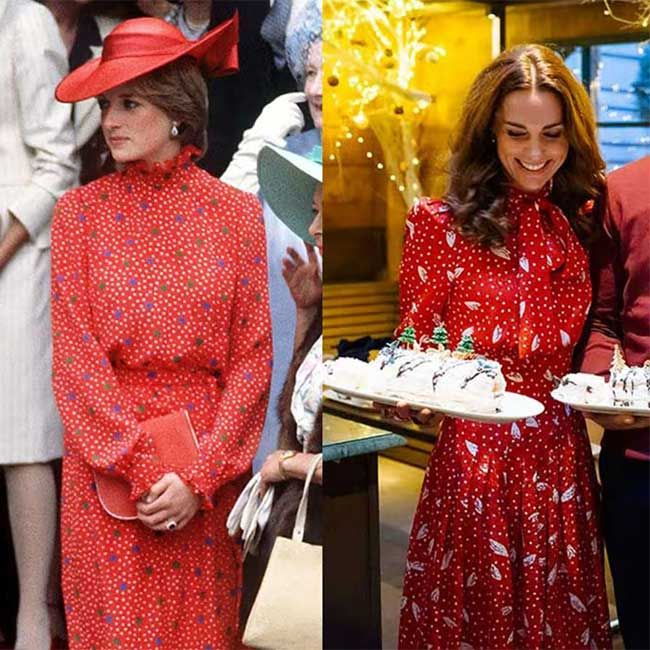 Kate is often spotted wearing pieces of Diana’s jewellery, from her stunning diamond and sapphire engagement ring to the dazzling Lover’s Knot tiara. But we are loving their similar red dresses!

The brunette beauty wore a ruby frock by Alessandra Rich with white polka dots and a petal pattern for the festive programme, A Berry Royal Christmas, with Mary Berry. The vintage design with a high-neck and long sleeves bore several similarities to Diana’s star-printed dress she wore to Nicholas Soames’ wedding in 1981. 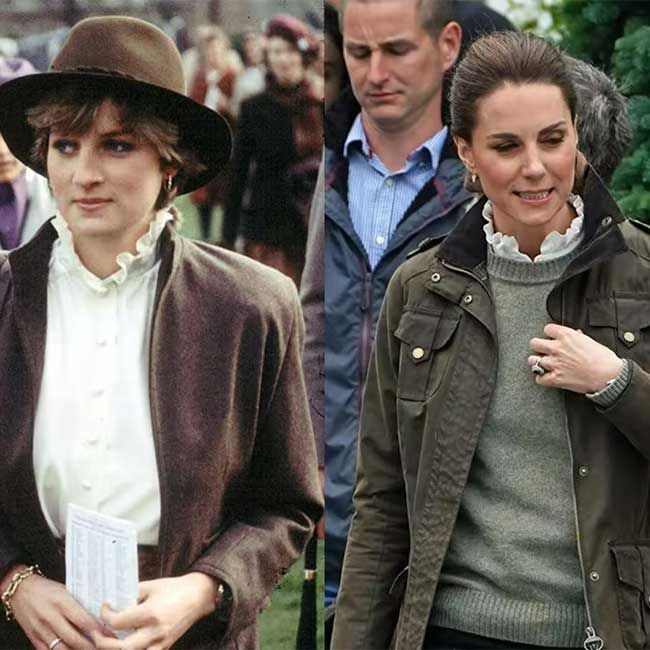 When Kate paid a visit to Cumbria in June 2019 wearing a ruffled collared blouse, we couldn’t help but think of a similar shirt Diana once wore. Don’t the ladies look similar in their pretty blouses? 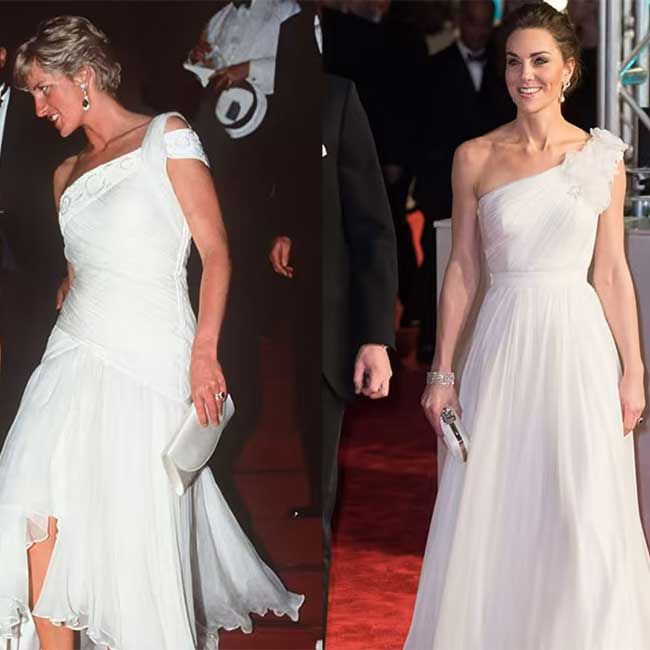 How similar do the pair look here?! Diana wore this beautiful one-shouldered white gown to a charity ballet performance in Rio de Janeiro in April 1991. Fast forward 28 years and Duchess Kate wore a near-identical dress by Alexander McQueen to the BAFTAs AND she teamed it with earrings belonging to the late Princess. Such a sweet tribute.

Kate looked stunning back in 2011 when she wore this vibrant green dress on a Royal Tour in Los Angeles. The outfit is a flattering style on the Duchess and the shade complements her skin tone perfectly. Diana also adored bright colours, and here she is in 1996 wearing a bright green dress in Kensington. Wonder if Kate had Di in mind with this look? 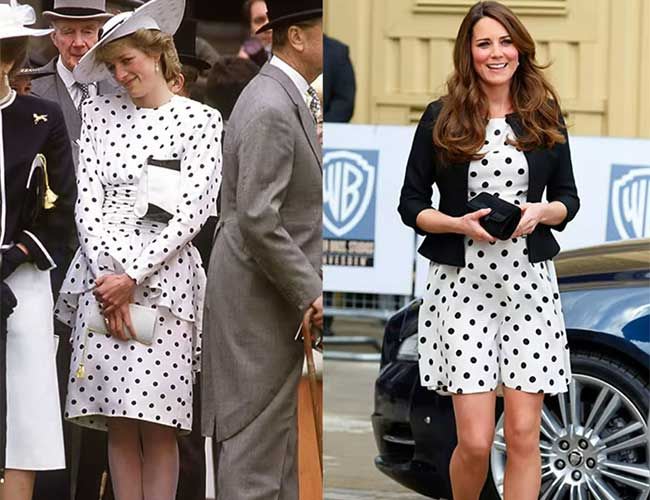 Diana was a huge fan of polka dots – as was everyone in the 80s – and the trend has seen a resurgence with mum-of-three Kate. In 1986, the mother of Princes William and Harry wore this chic black and white spotted dress to the Derby horse race. Kate donned a similar outfit during her pregnancy in 2013, looking chic in this monochrome spotty dress with black jacket at Warner Bros. Studios with Prince William.

READ: 14 of Princess Anne’s most stylish looks over the years 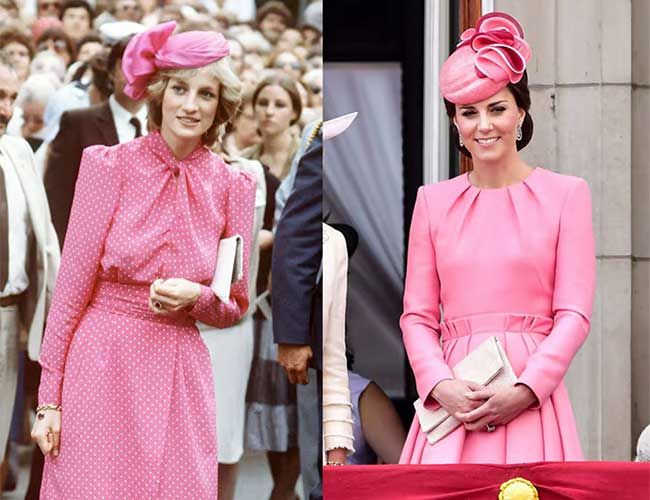 Wow, these outfits are virtually identical. Duchess Kate wore this gorgeous bright pink dress by her favourite designer Alexander McQueen to the 2017 Trooping the Colour ceremony. Did she base her outfit choice on Diana’s ensemble from her 1983 trip to Perth, Australia? The dresses even gather in the same way at the neckline. Spooky. 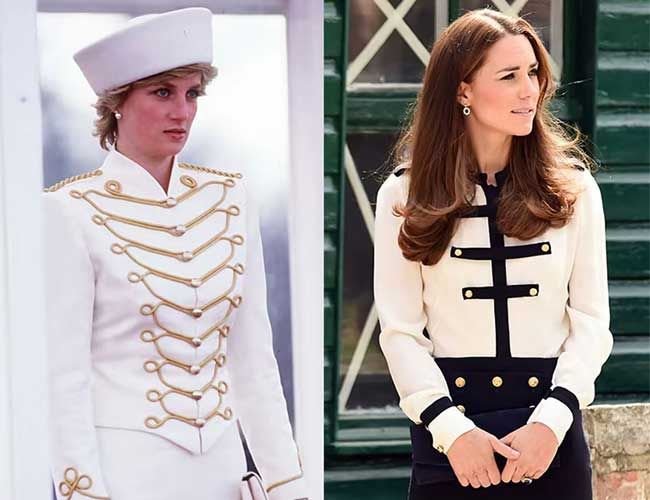 Another bit of fashion inspo from Diana! Kate wore this gorgeous military-inspired blouse by Alexander McQueen back in 2014, while Diana stepped out in a military-style suit by Catherine Walker in 1987.

Kate looked so summery when she wore this cheerful yellow floral dress to a German market tour in July 2017. She seemed to be channelling Diana, who wore a very similar yellow patterned dress back in 1983 on her Royal Tour of Australia. 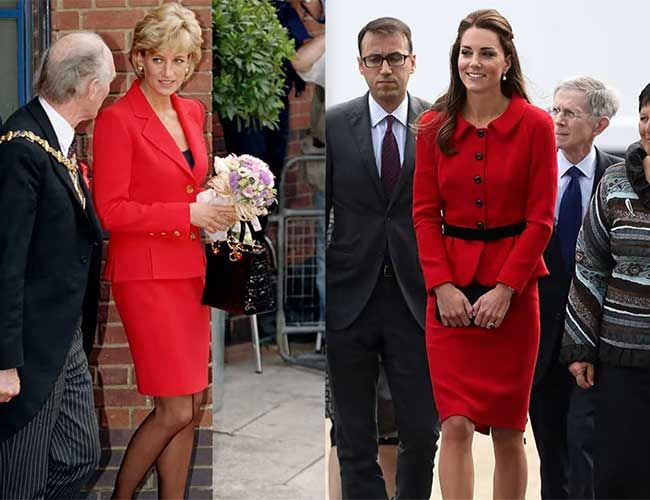 Nothing says ‘I’m here’ like a red suit. Diana stepped out in this sophisticated number in 1996 for a charity appeal at London Lighthouse. Kate paid homage to her late mother-in-law in an updated version, wowing in this tailored red suit with cute back belt. We’re sure Diana would have approved.

SEE: All the times Kate Middleton has worn a royal tiara 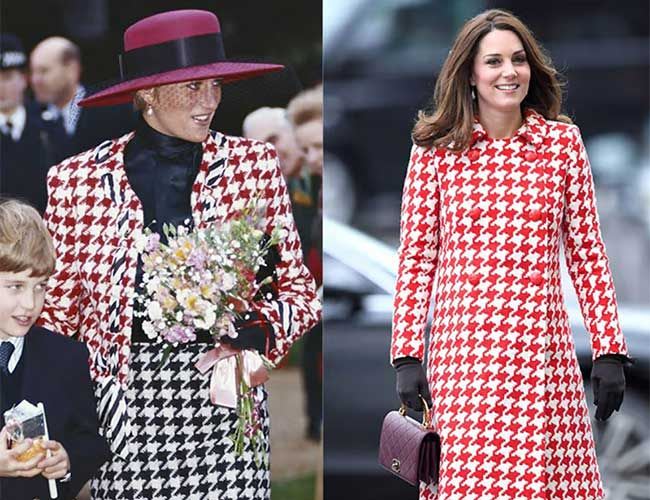 This is uncanny. Diana wore this black, white and red houndstooth patterned Moschino suit back in 1990 at the christening of Princess Eugenie at Sandringham. Then in January 2018, Kate stepped out in this red and white houndstooth coat by Catherine Walker on a visit to Sweden. Surely too similar to be coincidence?

The sailor look was huge in the 80s and Princess Di was famed for wearing the fun style. Here she is at Kensington Palace in a navy blue dress with white collar. Many said Kate copied her style in 2011 when she sported this Alexander McQueen white sailor dress in Canada. 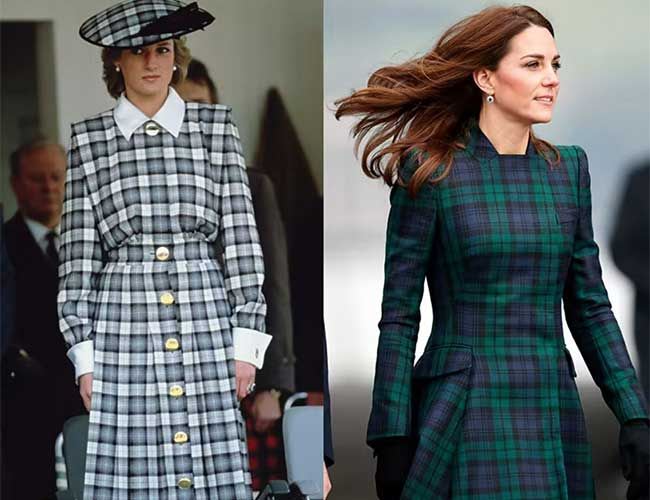 It seems customary for royals to wear tartan when they visit Scotland, and here we have both Princess Diana and Kate Middleton in the regional dress on their trips to the country.

MORE: Why Kate, the new Princess of Wales, will not inherit Princess Diana’s wedding tiara

The mother of Prince William looked elegant in this checked dress with coordinating hat at the Braemar Highland Games in 1989. Kate channelled the late Princess in January 2019, wearing this green tartan outfit.