The One With the Leather Pants! Friends: The Reunion had hundreds of hysterical moments, but the most iconic segment may have just been the fashion show portion of the evening — namely when Cindy Crawford strutted her stuff in Ross Geller’s very tight, very pasty leather pants.

The Crush, Where They’d Be Now and More ‘Friends’ Reunion Best Moments

As one might recall, Ross (David Schwimmer) wiggled himself into some skin-hugging leather pants for a hot date. But, add some heat, baby powder and heck of a lot of sweat to the equation, and he ends up naked in the bathroom with “pants paste.”

Fast forward to the reunion special, which aired HBO Max, and the pants make their grand reappearance on Crawford, during a segment where some of the show’s most memorable clothes were brought back.

And from the second the supermodel hit the runway, the OG cast was clapping, laughing and hollering.

‘Friends’ Cast From Season 1 to the HBO Max Reunion: Photos

Paired with lug sole boots and silky button down, Crawford definitely looked a lot more comfortable in the clothing. And, according to Erica Cloud, who was in charge of wardrobe for the reunion, it’s because they fit her “perfectly.”

She told Popsugar: “They are the EXACT Agnés B. pants that Ross wore, and they fit her perfectly! No one else has worn them besides those two icons! She even wanted to carry the baby powder and lotion down the runway, but they need up doing no props.”

Crawford wasn’t the only star to make a guest appearance in Friends clothes from episodes’ past. 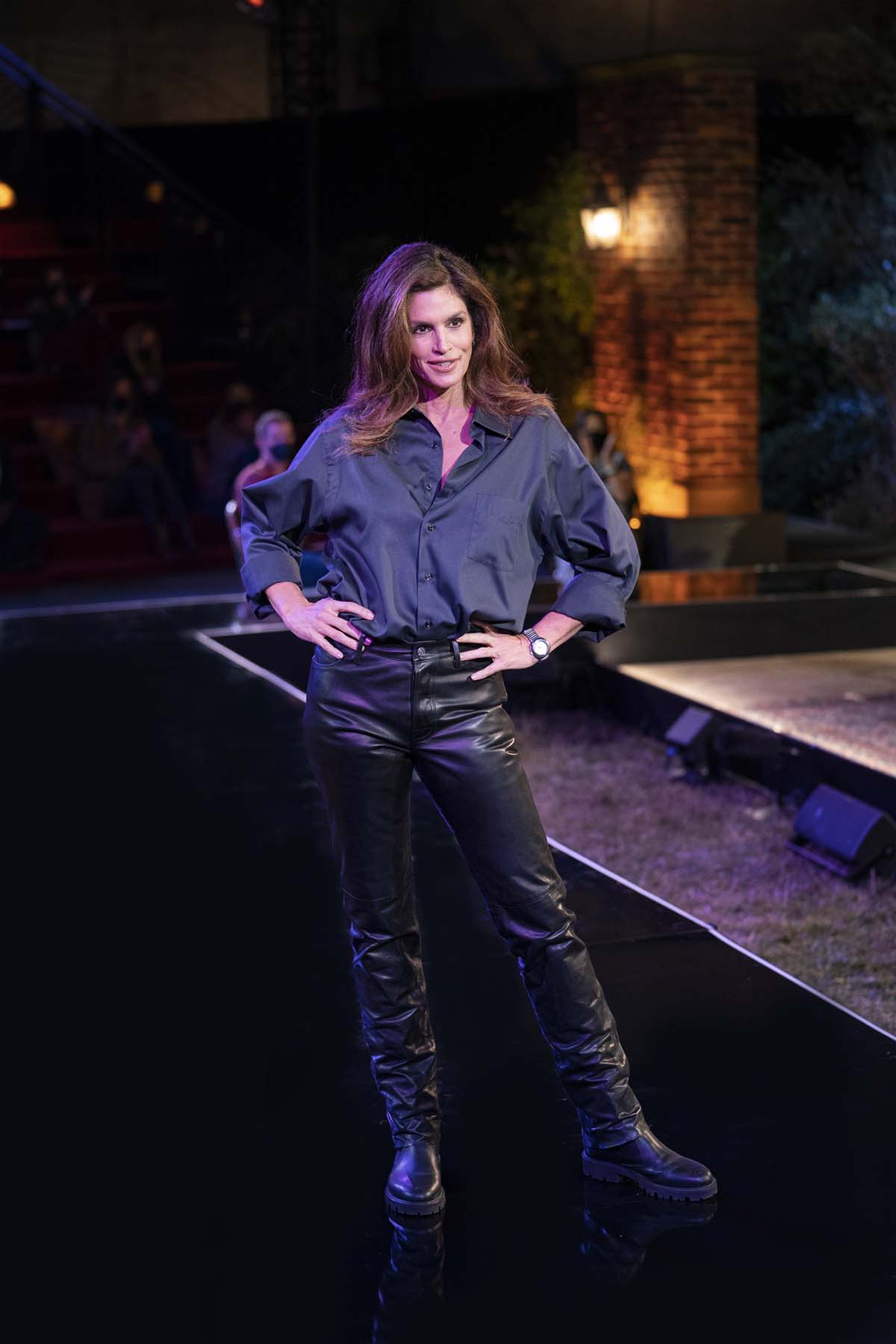 Cara Delevingne also hit the stage — twice! She opened the show in none other than Rachel Greene’s (Jennifer Aniston) pink and poofy bridesmaid’s dress from Barry and Mindy’s wedding in season two. Staying true to script, she even flashed her red underwear!

Lisa Kudrow: Having Major Celebs at the ‘Friends’ Reunion Was ‘Intimidating’

Before Delevingne returned in the always iconic holiday Armadillo costume, Justin Bieber walked the runway! He did a little dance in Ross’ Sputnick costume. The cast was clearly surprised by his arrival, as Schwimmer stood up in excitement and Aniston screamed, “What?!”

The evening’s models certainly had a good time, as Delevingne even took to Instagram to share her excitement and some backstage photos.

She captioned the post: “Could I BE any more excited??? Being a part of the Friends reunion was truly a dream come true. I grew up watching the show religiously and feel so lucky to have been included in this incredible special with such an amazing group of people. Plus, I got to be the HOLIDAY ARMADILLO. You’ll laugh, cry and feel like they never left.”