Imagine being a creative director of the world’s biggest luxury fashion brand, one practically synonymous with travel, and being grounded in Paris for going on a year?

No matter. Nicolas Ghesquière can travel in his mind, and could finally indulge a collection theme that has long percolated there: mythology. He saw it as a way to explore different representations of femininity: Diana synonymous with conquest, Minerva with science, and Venus with seduction, for example.

And as luck would have it, the spectacular, transporting Michelangelo and Daru galleries at the Louvre, about to undergo renovation, were offered to him as a possible show venue. (Louis Vuitton, Ghesquière’s employer, has been an official patron of the French museum for 15 years.)

“I started the season thinking [about] what could be a wonderful trip, what could be the most dreamy escape,” he said in an exclusive interview. “And I thought it was very interesting to try to connect and to express these different facets of femininity.”

His filmed fashion show, airing today, will have an array of priceless Greek, Roman and Etruscan statues as witnesses — and an idyllic backdrop.

Artistic director of Vuitton’s women’s collections since 2013, Ghesquière also blended in a more contemporary reference, though hardly estranged from mythological imagery: the Italian artistic atelier of Fornasetti, founded in 1940.

“I was always fascinating by the world of Fornasetti,” the designer enthused, seated at a giant silver table at his design studio on the Left Bank, a view of the Louvre, lit gold by the setting sun, to his left through the tall windows. “I found a lot of connections between the intriguing images of women they have developed, expressed and shown over the years. The fact that they collected so many images of mythological icons and transformed them into those black, white and gray drawings — it was very tempting to call them, so we did and came to a partnership.”

Familiar and never-before-seen Fornasetti characters and motifs will appear on handbags and weekenders, cuing up another collectible artist collaboration, but also on the runway garments, somewhat in the manner of rock stars on T-shirts, Ghesquière said with a grin, making it clear that his is a mythological collection without something as obvious as draping.

The designer and his team were flummoxed by the richness of the Fornasetti archive — it spans some 13,000 artifacts — discovering drawings by founder Piero Fornasetti and lots of motifs — keys and locks among them — that are synonymous with Vuitton, a historic trunk maker founded in 1854, along with depictions of ancient Rome. Ultimately, 15 designs were selected, which will be splashed across runway looks and a dedicated capsule collection, which will make its debut separately at a later date.

“Some of them are really literal, and I’m using them exactly as they were drawn, and some of them are completely customized and reintegrated into Louis Vuitton,” Ghesquière explained. “It shows also how much those drawings are completely timeless. They [Fornasetti] really created a new classic, and I’m really intrigued by the mystery that all those characters evoke.” 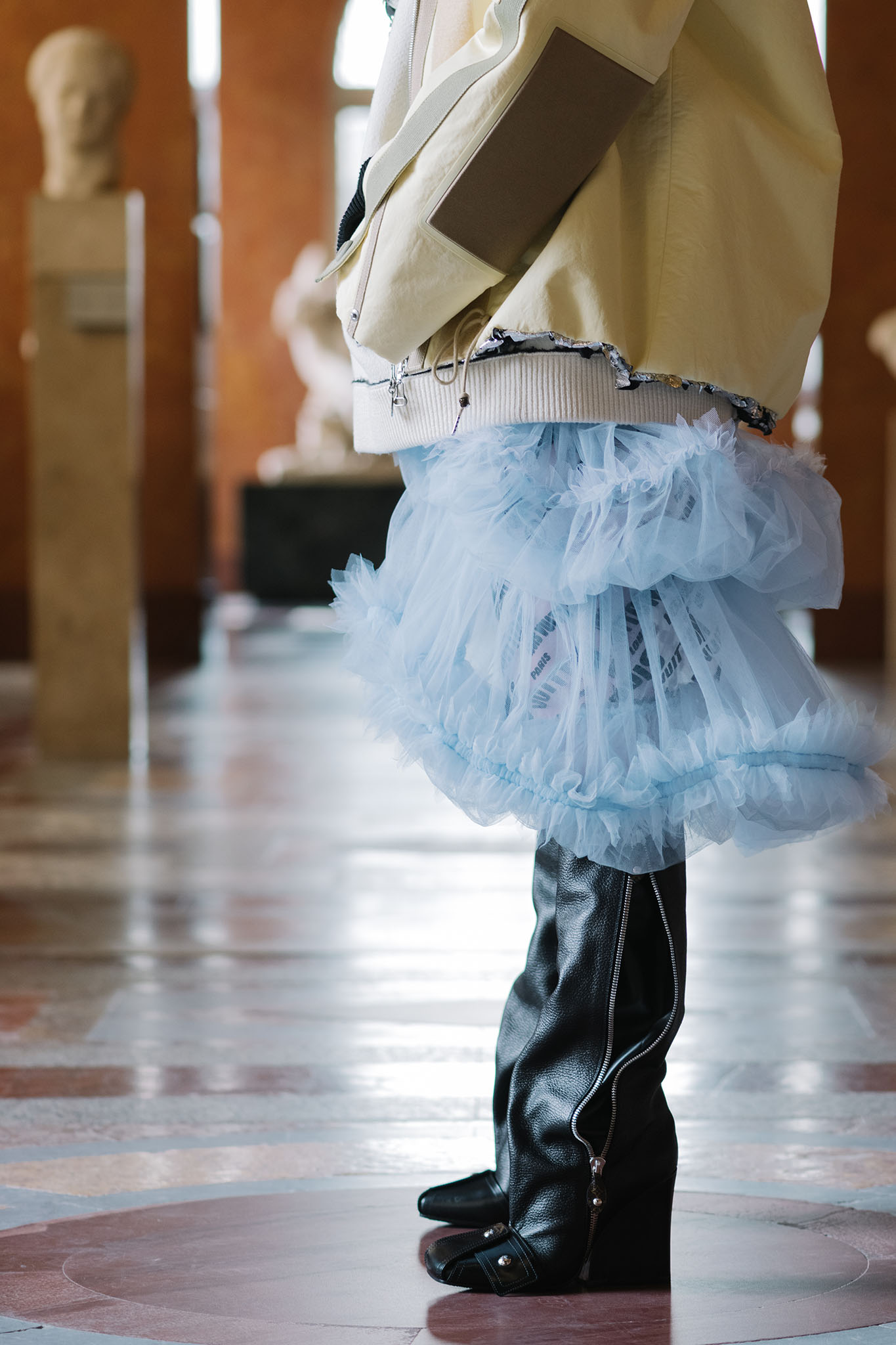 Always connecting his far-flung, historical references to the present, Ghesquière also reflected on the strange and unsettling here-and-now of the pandemic: the lockdowns and people working from home popularizing comfort dressing on the one side, and extreme fashion statements, largely broadcast on social media, on the other.

“I was so curious to try to find a great combination between those two feelings that are definitely going to stay in our life,” he said.

Ghesquière found the answer with a decorative, craft-intensive collection with heroic airs and sculptural volumes, but with soft padding incorporated into many looks for day and evening.

“So they are like a pillow you are taking with you everywhere,” he explained. “I like to think that these clothes represent that moment when you are finally getting out, and finally connecting to others [in person], but you are also taking something that belongs to you, something that is for you — this moment when you were in your space and you felt very comfortable, you can take this with you.”

The Vuitton show typically falls at the tail end of Paris Fashion Week and at the end of the international circuit, giving Ghesquière the last word on the season. Long a fashion trailblazer, since his days at Balenciaga, he has a reputation for making original and daring fashion statements, and it’s clicking strongly at Vuitton.

Vuitton is one of a handful of luxury brands that has been roaring ahead and gaining market share despite the destabilizing impact of the coronavirus crisis.

“I think the house represents stability in these times,” Ghesquière said. “I think people also appreciate the fact that there is this quality of execution.” 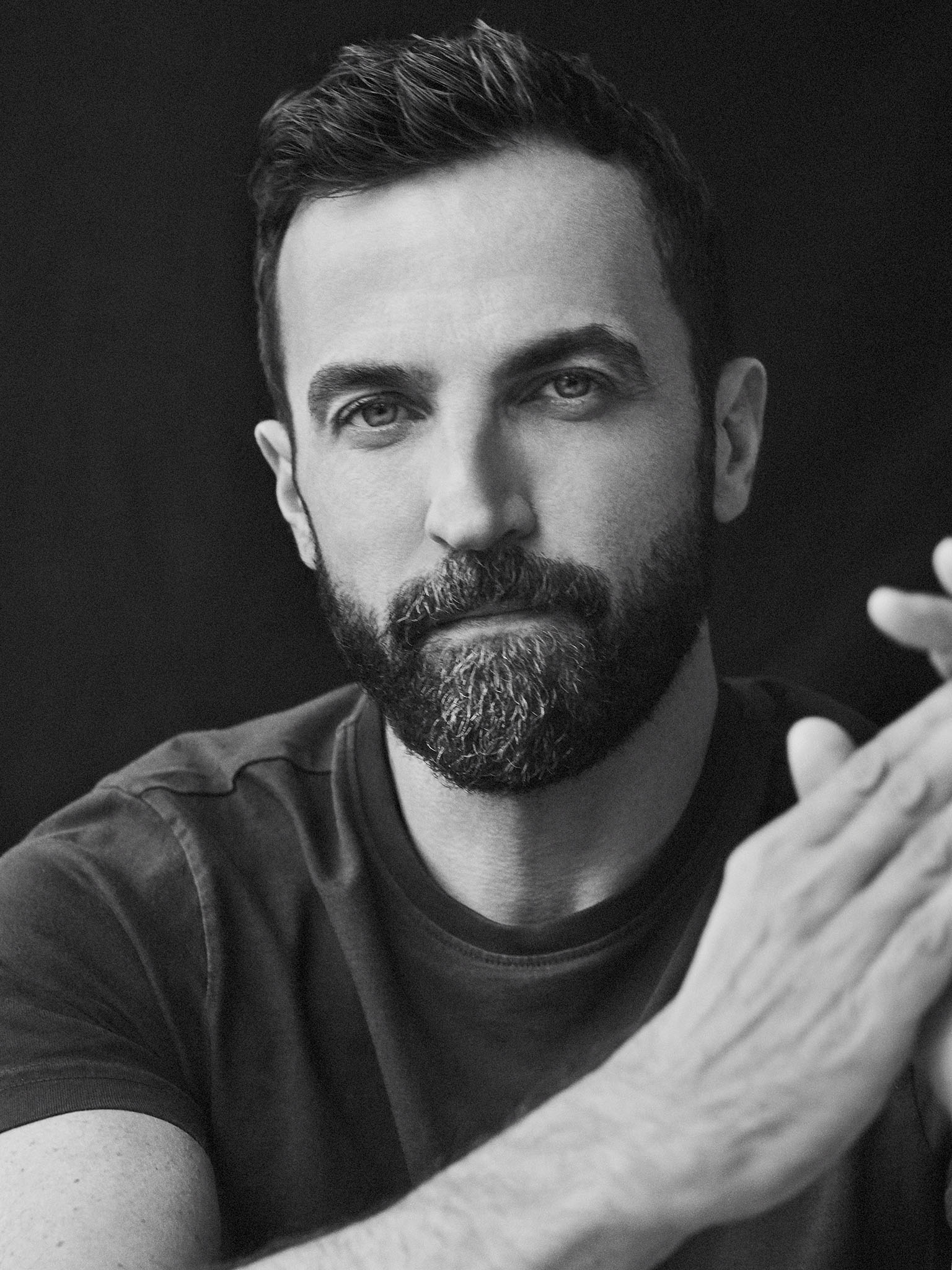 To be sure, the designer has kept Vuitton synonymous with cutting-edge fashion while turning out a string of hit handbags, the core business and specialty of the maison.

“It’s important to know that the fashion show is bringing things that are really selling in quantity,” he said. “I’m not saying it’s always like that, obviously. But it happens a lot.”

“I love to do shoes and we have created a wardrobe of shoes since I arrived. It’s incredible to see that the shoes we showed in Palm Springs five years ago is still one of the best sellers,” he said, referring to the platform boot known as the Laureate. His futuristic Archlight sneakers, chunky Star Trail combat style and second-skin Silhouette boots with heels in the shape of a monogram flower are also in this elite league. (A monogram backpack from that 2015 Palm Springs display has also entered the lexicon of Vuitton “It” bags.)

One of Ghesquière’s more unusual propositions recently is the Pillow Boot, resembling a down jacket for the foot, that he used to style the five final looks of his spring 2021 fashion show. A “phenomenon” already, it also looks likely to enter the “classical portfolio” of Vuitton.

“We did substitute things that existed before with those new classics, and at the same time create a territory with the seasonal collections. And it’s really that dynamic that is my main contribution. It’s how to create and to explore new territory, new products, new ways of doing, new ways of presenting, and it can take very different shapes. That is the responsibility of being a creative director.

“You have to be fearless, let’s be honest. It’s about taking risk,” he continued. “And we see with time that the customer has become younger.”

Vuitton now also carries over some ready-to-wear styles that can live for several seasons or years into what Ghesquière called a “more iconic collection” of seasonless items, and it also does occasional thematic collections, as the brand did in 2018 in collaboration with fashion editor Grace Coddington, last year’s Game On collection based on playing card motifs, and the forthcoming Fornasetti capsule.

Next up for Ghesquière will be the cruise collection. With travel restrictions, lockdowns and curfews still in effect in many places, a decision has yet to me made about the format and timing for that collection, which in the past prompted trips as far afield as Brazil and Japan.

“Of course, we can dream. But the reality might come back to us. So the idea is to be fair, reasonable and safe for everyone,” he said. “We have to stay connected to the world, even if we are separated physically.”