In December 2015, Amanda Winer went on a 10-day Birthright Israel trip as a participant researcher. Her focus, as preliminary research for her dissertation, was relationships and social habits of Jewish millennials. Finding a mate was last on her list, especially since she had been dating someone for the past six months. Yet when she met Nathan Friedman, who was taking the trip to make new friends, there was a mutual attraction.

“Nate was cute, kind and charming,” said Ms. Winer, 31, a social psychology researcher who is studying education and Jewish studies for a doctoral degree at N.Y.U. “All around us everyone was hooking up. Nate was a total gentleman and never made a move.”

On Jan. 6, 2016, the group, which had returned home before the new year, got together for a reunion. Ms. Winer had ended her relationship after the trip and was now single; she shared that information loud enough so that Mr. Friedman, who was standing behind her at the bar, could overhear. Mr. Friedman wasted no time and asked if she would walk him to the subway, then he asked her out.

“It was a mix of heart pounding and butterflies to ask her out,” said Mr. Friedman, 31, an equity researcher at Wedbush Securities, an investment firm based in Los Angeles. “Knowing I could have a shot at a relationship now that she was single worked up my courage.” 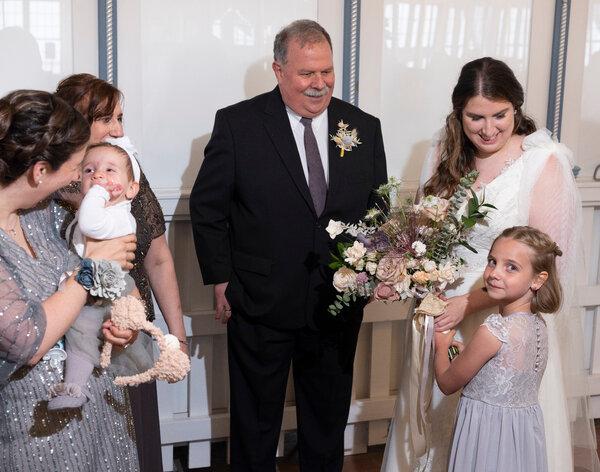 Their first date happened two days later. But somewhere between dinner at the Saigon Market and Chloe’s for sorbet, both in the Union Square area, Mr. Friedman, who has a plethora of food allergies, began to feel sick. En route to Ms. Winer’s home, it was clear he needed some help.

“I have Benadryl and an EpiPen pen in my apartment,” said Ms. Winer, who does not have allergies but likes to be prepared. “He took the Benadryl and laid down on my bed. Then I heard him get violently sick. It didn’t turn me off. I felt a deep connection. The evening was confirmation this was special.”

Mr. Friedman, who was sent home later that evening in an Uber, was mortified. “I hoped she relished the fact we had a good time before I got sick,” he said. “I profusely apologized the next day in a text. I had no idea if she’d write back or ghost me.”

Ms. Winer texted back minutes later. More texts followed, and so did a relationship.

The next two years were spent attending Broadway shows and soccer games, exploring New York City, meeting each other’s family and friends, and partaking in many allergy-free meals.

On January 15, 2018, the pair, ready to merge their lives and responsibilities, moved into a one-bedroom apartment in Union Square.

The couple became engaged on March 23, 2019 while visiting Mr. Friedman’s cousin in Grenada. They were hiking on Levera Hill, in Saint Patrick Parish, and after reaching what is known as the Welcome Stone at the apex, Mr. Friedman got down on one knee and proposed.

“She makes me smile and brings out the best in me,” he said. “She’s the most beautiful person. I wanted to spend my life with her.”

“We were literally on top of the world,” said Ms. Winer, who immediately said yes. “One of the major accomplishments of your life is to find someone you want to share it with. I felt one of the dreams I had was checked off.”

Their celebratory enthusiasm was short-lived. Once home, X-rays taken at his orthodontist’s office, where he had hoped to have his teeth straightened, showed some abnormalities. A maxillofacial surgeon was recommended.

The next three months were a succession of doctor appointments. Mr. Friedman was told he had a skeletal malocclusion, which severely limited his airways. Several surgeries, which included breaking and moving his upper and lower jaw and realigning his chin, were needed. His jaw would be wired shut for the following three months. If not fixed, doctors said he would likely not make it to age 45.

“My world was burning down,” Mr. Friedman said. “I knew I’d have to go through this to save my life, and I knew Amanda wasn’t going to leave me. That reaffirmed I had a true partner.”

The next two years were spent researching, preparing, worrying, connecting and dealing with insurance companies for Mr. Friedman’s surgeries, which happened in January 2021.

They were also living with the low murmur of wedding anxiety and planning. Thanks to Whatshalfway, a niche site that connects people halfway between two or more locations — Ms. Winer is from Westborough, Mass.; Mr. Friedman is from Livingston, N.J. — they found Lighthouse Point Park, an events space, in New Haven, Conn. The outdoor spot, which overlooked the beach, features a working antique carousel and offered room for an indoor sit-down dinner.

As Mr. Friedman made positive post-surgery recovery, a steady excitement and optimism returned.

“The focus of our life together has been accomplishing and fighting Nate’s health battle,” Ms. Winer said. “It felt like nothing could happen until we solved this problem. Now we are moving toward equality. Every day he’s coming back. I feel like we won. We’re getting to have a life without fear of an expiration date.”

On May 30, 2021, the couple were married by Cantor Lucy B. Fishbein of Congregation B’nai Jeshurun in Short Hills, N.J., before 65 guests and 150 people watching virtually.

“It was like planning two weddings,” said Ms. Winer, who sent 100 gift boxes that contained homemade, heart-shaped Rice Krispie Treats; cotton candy balls; handmade paper flower centerpieces; personalized handwritten notes; and a Spotify playlist. The couple also hired a production company to cover the wedding using cameras to capture different angles of the event. Childhood friends’ prerecorded toasts were played while in-person guests moved from the beach ceremony into the main venue or took a ride on the carousel.

“We lived in a 500-square-foot apartment, got through Covid and the surgery at the same time, and we stayed together,” said the groom. “If we can get through these things and still have such love and compassion for each other, we can get through anything. I’m so excited for our future. I didn’t think I’d have one. I have my life back and can spend it with the person who means the world to me.”

Ms. Winer spoke similarly. “I learned what love is through this and how to be a partner,” she said. “We are returning from a very dark place. This wedding is our light.”

Kid Cake Abby Sauberman, a 15-year-old baking prodigy, created a vegan vanilla cake with honey chamomile and mixed berries. It was also nut-free so Mr. Friedman could eat it worry-free. “We love baking competition shows, especially ones with kids,” Ms. Winer said. “I volunteer at Eisner Camp, a Jewish summer camp I went to as a child. They had a silent auction last year. I got outbid on Abby’s cake. So I reached out to her separately to do ours.”