‘When I first started shopping in charity shops, it was a massive secret. I would look around to see if anyone knew me before I walked in.’

Rosaria Barreto used to be ashamed of her thrift habit, which began when she was just 12. But now, more than a decade on, she is proud of her wardrobe that has been refined through years of devoted searching.

Rosaria, 25 from Kent, says she has saved ‘thousands’ through charity shopping, and has furnished her flat nearly entirely with second-hand treasures.

She’s one of a brigade of nifty thrifties who are beating the cost of living crisis by economising on clothes shopping.

‘I used to get made fun of because all of my clothes were hand-me-downs or charity shop finds,’ she explains. ‘Now times have changed and people are amazed by  what I find.’

Rosaria, owner of PT company Vitality Hub, estimates that at least 85% of her wardrobe is pre-loved. She recently attended a swanky premier in a £5 dress from French Connection that looked ‘stunning’. She buys tops for as little as 50p and frequently finds never-worn bargains with their tags still attached.

One of nine, Rosaria’s parents couldn’t afford many new clothes for the kids, so she grew up ‘well dressed’, but in a lot of hand-me-downs. 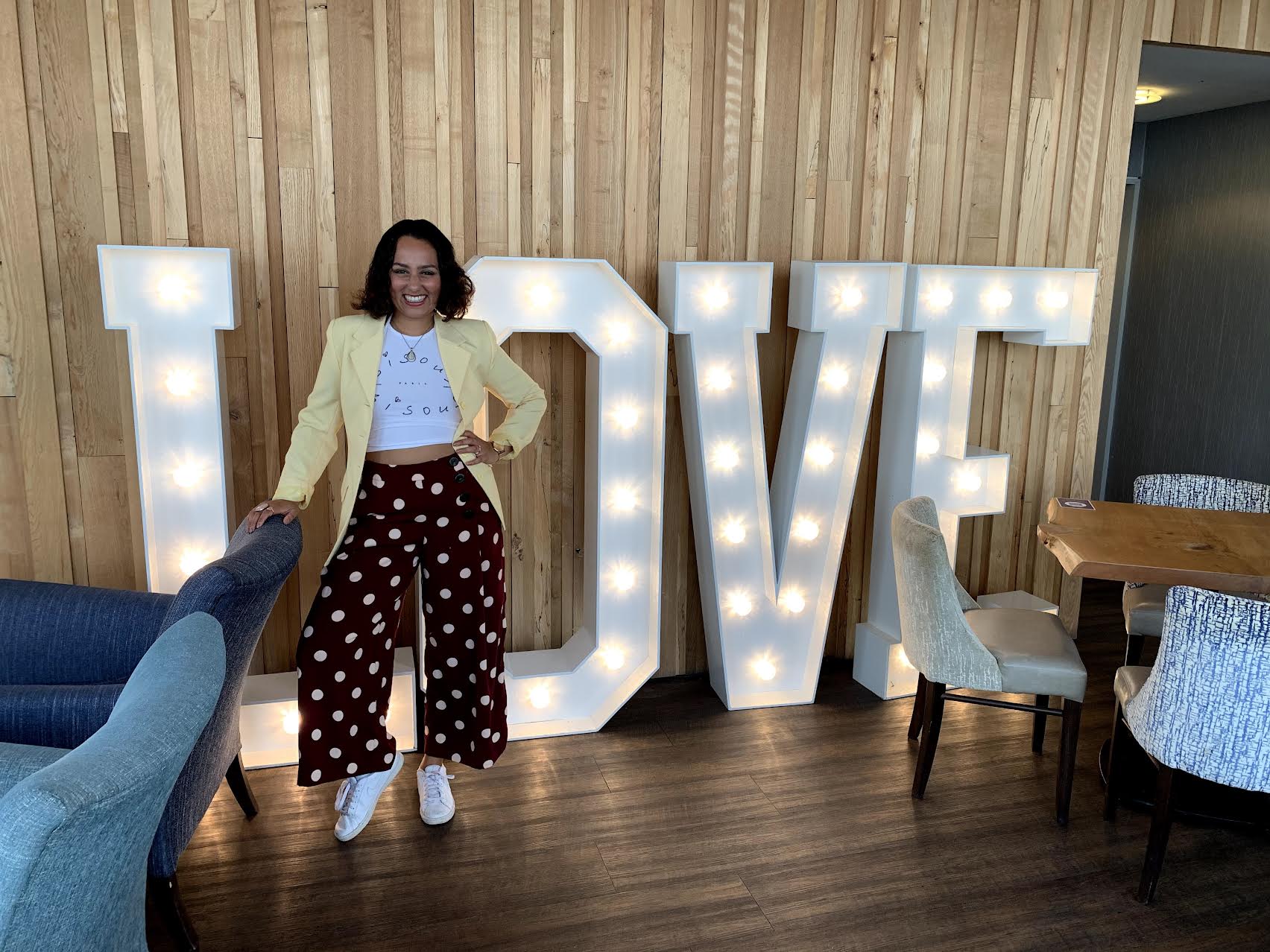 ‘When I got to year seven and started going to parties and socialising more and got more independence, I didn’t really have any clothes that I felt empowered in,’ recalls Rosaria. ‘I didn’t have a sense of identity, so I started looking at charity shops.’

Thrift shops were considered ‘uncool at the time’ she adds – people would accuse her of wearing things ‘people had died in’. Now Rosaria frequently finds designer labels and is proud of the compliments she gets on her style.

‘I know that I can go to a charity shop and find a £500 pound dress and pay £5 for it. And now, because I’ve been doing it for so long, I absolutely refuse to pay full price.’

Rosaria spends around £50 a month on clothes – a figure that she says would be five or six times more if she was buying new.

‘Most of the clothes I buy are designer, well-known brands,’ she explains. ‘I refuse to buy fast fashion and I only buy for quality. I won’t buy anything that’s really worn or low quality.

‘I get things that are a fifth of the price and have saved thousands. It’s a borderline addiction. If I am out with friends in a new town or city, I have to go into the charity shop. I’ll think about that thrift store for the rest of the week if I don’t go in, because I know there could be something amazing in there.’

There are lots of arguments for shunning the big stores in favour of your local charity shop – not least the huge savings to be made. With womenswear prices increasing almost twice as fast as wages over the past five years – that’s a 37% rise – and a crushing cost of living crisis, buying new clothes isn’t as affordable as it once was.

Fashion is the third largest polluting industry, after food and construction. The production of clothes releases 1.2 billion tonnes of carbon dioxide into the atmosphere every year – more than the shipping and aviation industry combined. In the UK, we buy more clothes per person than any country in Europe – which leads to a lot of waste. Around 300,000 tonnes of used clothes are burned or buried in landfill each year, according to Greenpeace.

Concerns about fast fashion are becoming so high on our agenda that this year’s Love Island – a show that has previously been sponsored by Boohoo – has coupled up with eBay.

Of course, there is the charitable element of thrift shopping to consider too, as money made by charity shops is invested back into good causes. Oxfam, who have 570 high street shops across the UK, made £39.4 million in 2020/21 – cash that benefits people experiencing humanitarian emergencies and other crises.

It is this feel-good factor that inspires Chloë Webster to do all her shopping in thrift stores and on eBay.

The 30-year-old meditation teacher from Chester spends no more than £100 a year on clothes and for the past decade has shopped exclusively in charity shops.

‘I love not creating a demand for new clothes,’ explains Chloë. ‘I am totally against fast fashion. The feeling that you’re finding something unique that isn’t mass produced – it’s like going into a treasure trove. I enjoy the chase of it all – discovering something special.’

Chloë recently attended her brother’s wedding in a £20 dress that had never been worn on eBay.

She says: ‘It’s really easy to go online, buy something from a big company that’s going to get to you the next day, but I didn’t want to do that.

‘We’ve got this need to buy new stuff all the time, but I think we should love our things a little bit longer and think about the story behind them. The earth can’t cope with throwaway fashion. It’s just sad when clothes are so cheap – you have to think about the people in the factories making the clothes. Are they being paid a fair wage? Is it fair that I am not spending much money, but someone else in the chain is being exploited?’

With the exception of underwear, Chloë hasn’t brought anything new for four years. She loves hand-me-downs and exploring charity shops in new towns.

Her best bargain was a pair of snakeskin ankle boots that cost £4. They didn’t fit properly so she sold them online and made £40. Her favourite item is a £3 linen coat that she wears all the time.

Chloë relishes the hunt for charity shop clothes, and enlists her Instagram followers in the game – posting garments on her Instagram account and garnering opinions before making the purchase.

She adds: ‘I just enjoy doing it; I am all about sustainability and encouraging people to live a slower existence. We are all really stressed all the time because of our fast-paced lives. So going into a shop and having a bit of a think about what you are buying means that not only does that donation go to charity, but you’re also having less of an impact in terms of your footprint on the earth.’

Personal Stylist Lindsay Edwards, from Bedfordshire, says she has saved a fortune thanks to her love of thrift.

‘The average person spends £43 pounds per month on clothes, I spend around £24,’ she explains. ‘I used to shell out around £120. And I’ve got so many more clothes than I would have if I spent the same amount of money in a full price store.’

Since January, Lindsay has been making a concerted effort to do most of her shopping in second hand stores. In that time, she has spent £145.78 and has purchased 20 new garments. She estimates they would have cost £650 brand new.

Lindsay – who lives and breathes fashion – had a crisis of conscience when she discovered how environmentally destructive the industry was. After learning that 150 billion garments are produced each year, and that on average an item is only worn 4-7 times before being thrown away, she decided to shop more sustainably.

‘I’ve always loved charity shops since I was a small child,’ says Lindsay. ‘My mum always used to go, not so much out of necessity, just practicality. Why spend more when you can get equally as good things that are already pre loved, and it helps a charity – and it preserves the bank balance?

‘When you think about the amount of clothes that go to landfill and the real dangers of fast fashion, we should be fighting back against that. There are so many hidden gems within charity shops. It is such a fun way to shop and it saves so much money. For someone who is so into clothes, it saves me an absolute fortune.’

Lindsay only buys items in excellent condition, and admits she is picky. She recently brought a Ralph Lauren jumper for £18 that would have retailed at £150 new. She was also delighted with a leopard print Jaeger trench coat – approximate value £275 – that she took home for £20. And she reinvigorates her wardrobe with belts, necklaces and other accessories that cost as little as 99p.

As a personal stylist Lindsay also helps clients make their wardrobes more sustainable. On top of charity shopping, she recommends dying clothes, changing the ways they wear things and encouraging them to buy items that will be worn over and over.

Lindsay adds: ‘We’re all taught to go to the shops to stay up to date with fashion, and to find the latest trends available – but they are actually still on offer in the charity shops. So not only have you got those items, but often they still have the tags on from people who have bought on impulse and changed their mind.

‘All fashion does repeat itself. So people are enjoying the 70s revival now and the square necklines and the slogan T shirts, and they’re all in the charity shops as well as on the high street at the moment. I’ve seen a real u-turn in my shopping since turning back to charity shops. They can be a real Aladdin’s cave.’