WHEN you’re dating you may come across a lot of different types of people.

There will be some who you totally click with and then there will be others who you just don't, and that is completely acceptable. 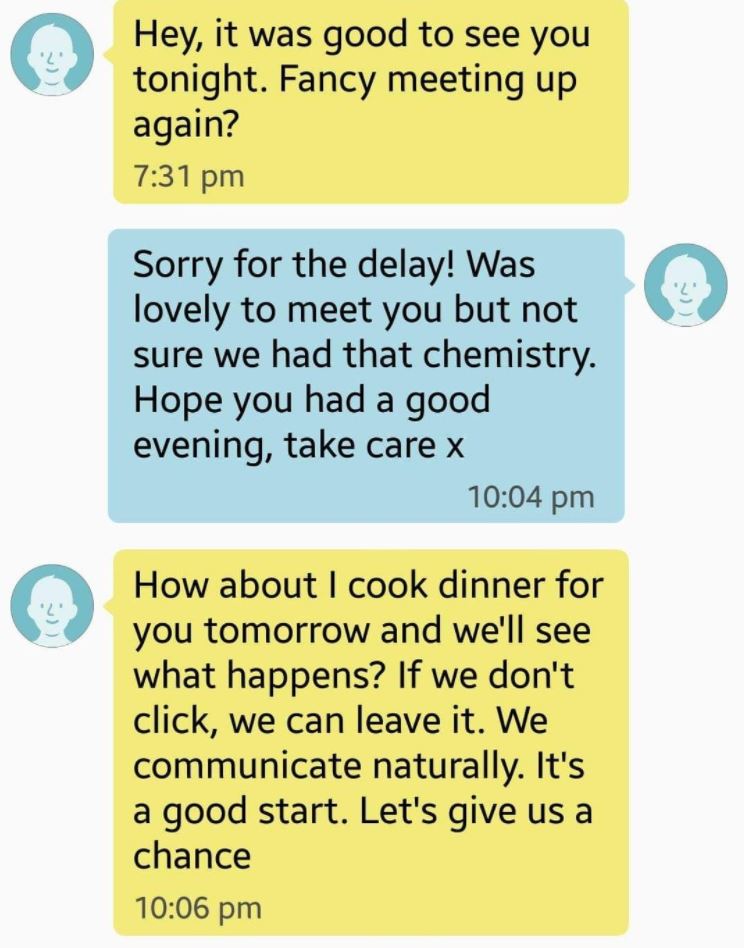 But if you paid for the date, would you go as far as asking for your money back?

Well, this is what happened to one woman who was recently trending on Twitter.

Celebrating the ‘six year anniversary’ the woman, who goes by the name of @LaurenNotLozza on Twitter, shared screenshots of a conversation between her and her date.

She captioned her pictures: “Six years since that lad tried to invoice me fore a s**t date.”

In the pictures, you see her date message her saying how it was “good to see” her that evening, and asked if she fancied meeting up again?

She replied apologising for the late reply but admitted that she wasn’t sure they had “chemistry” and to “take care.”

He replied writing: “How about I cook dinner for you tomorrow and we’ll see what happens? If we don’t click, we can leave it. We communicate naturally. It’s a good start. Let’s give us a chance.”

The woman, then replied to him apologising saying that she wouldn’t go to someone's house when she “barely knows them.”

She adds: “Unfortunately I’m overly romantic and a big believer in feeling some kind of spark early on. WIsh you all the best though.”

He replies by saying: “Ok, fair enough. Can you pay me back for your coffee? I don’t like wasting money. Prefer to use it on a date with someone else.”

OK, fair enough. Can you pay me back for your coffee? I don’t like wasting money. Prefer to use it on a date with someone else

To which she replied: “It’s a shame you consider a date to be a waste when it doesn’t end on your terms.

“How about I donate £3.50 to a charity of your choice to give you a chance to regain some decorum?

“I can even bump it up to £5 to cover your bus journey too if you’d like? Might I be so bold as to suggest the Royal British Legion as it was Armistice Day yesterday.”

However, he wasn’t happy with her response and simply replied saying how he’d like to decide himself “what to do with” his money, and finished the text message off with his account details. 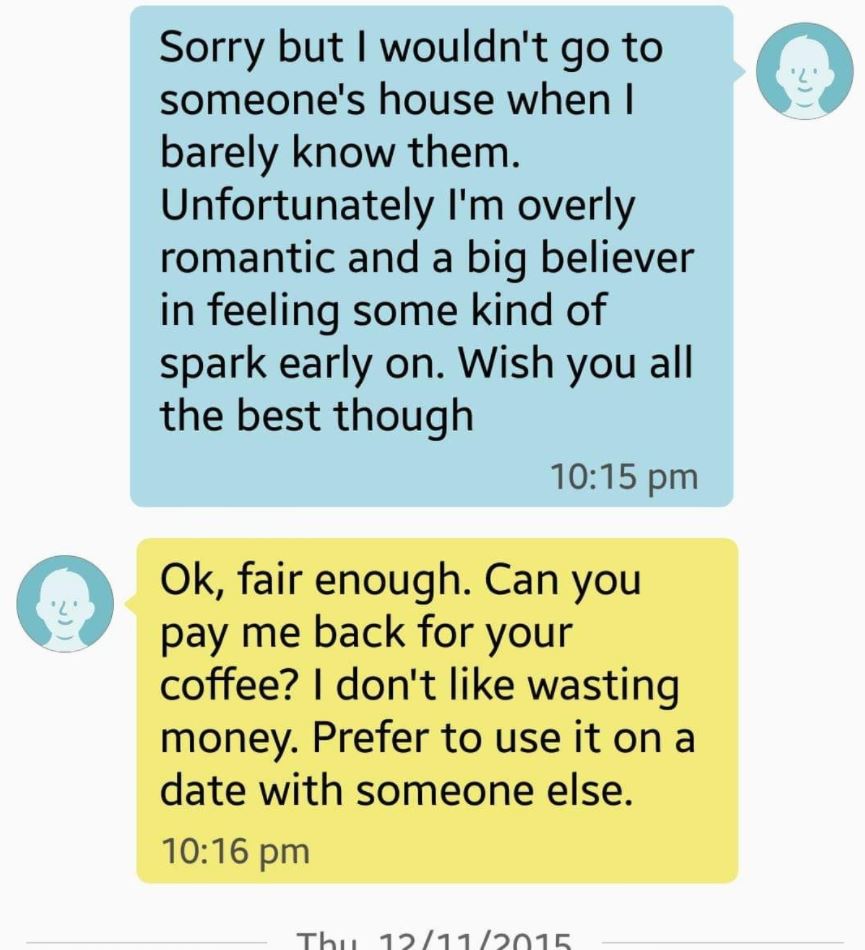 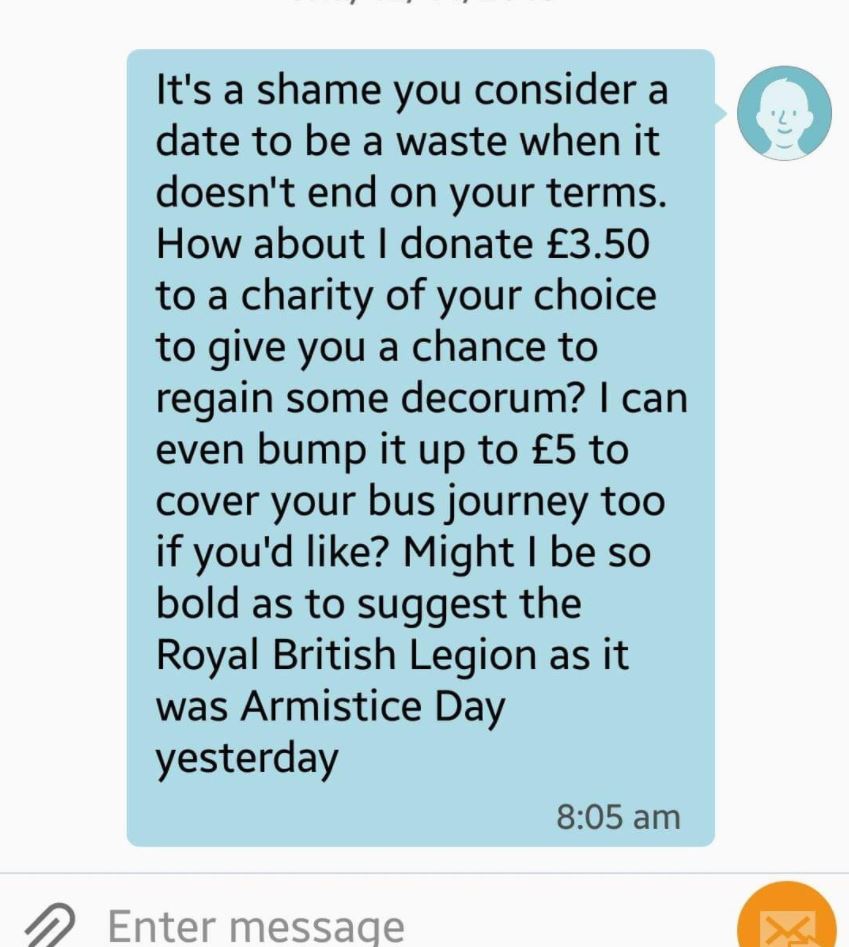 One wrote: “This is priceless comedy, and has really brightened my day! I hope you didn’t reply to the last one. Or said you had already paid the RBL and he should ask them for the money. What a sad man.”

Another added: “Dating these days is brutal!I had a fair few frogs in my time.I'm glad I don't have to navigate it.

A third said: “No way, he was serious! You did very well to swerve him.” 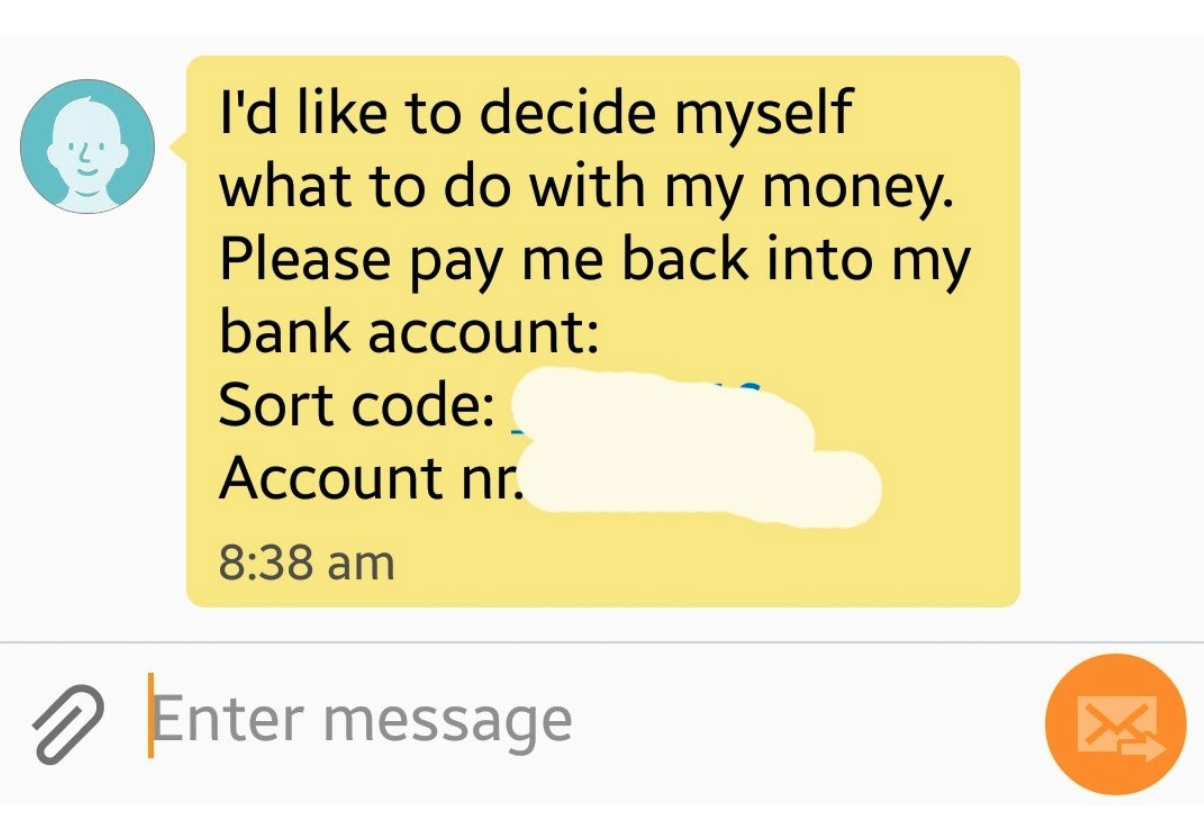 For other dating stories , check this woman whose date only bought food for himself after she forgot her money

And, another woman's date called her a c*** behind her back before – he accidentally sent her a text meant for his mate

Meanwhile, this woman refused a second date with a guy and his response shocked her so much she has sworn off dating for good.