Apparently, the rose is still a rose in fashion even in the wake of the pandemic shutdown.

While Robert Frost, Georgia O’Keeffe, Aretha Franklin and other creatives have immortalized the flower in verse, the Museum at FIT is doing so with its latest exhibition.

Nearly a year after its planned unveiling, “Ravishing: The Rose in Fashion” is on view at the Fashion Institute of Technology’s New York City campus. From embroidered 18th-century silks to current gender-neutral runway looks, the show is the first sociocultural examination of the rose in fashion. Featuring 130 garments and accessories, the exhibition covers more than aesthetics by exploring how the rose has influenced the way we look, dress, feel and fantasize. Along with looks from Halston, Christian Dior, Noir Kei Ninomiya, Charles Jeffrey and others, there are also hats from Stephen Jones, Lilly Daché, Caroline Reboux and the milliner known as “Mr. John.”

When the museum’s doors reopened to the public Friday, people were lined up outside waiting, according to the museum’s director and chief curator Valerie Steele, who spent an hour greeting them. Several dressed in rose-inspired clothes, as if it were a party, and others shared their appreciation that the museum was open again, she said in an interview Wednesday.

The Cape Makes A Return On The Runway

Steele discussed how strange and serendipitous it was that “Ravishing: The Rose in Fashion” turned out to be first post-shutdown exhibition. “During the pandemic, the thing that kept me going was going out on these long walks to different parks downtown and taking pictures of plants and flowers. That was just like, when David Hockney tweeted, ‘[Do remember] they can’t cancel spring,’” she said. “That’s how I felt and the same with this roses show. I kept thinking, ‘We’re not going to cancel this, even if it’s 11 months late. We’re going to do this show.’ It’s unbelievably beautiful. It has that same kind of idea — you can’t cancel rebirth. The flowers are coming out again.”

Having also spoken with visitors on Sunday at the Museum at FIT, Steele said a lot of people seem to be feeling the show emotionally, which is what she hopes for. “So much research went into it. There are just layers of things. The most obvious one is the symbolism of color — passionate red, the innocent white, girlish pink, the physical black rose and the symbolism of thorns — all of that is just a palimpsest of meanings. Rose as a fragrance. Rose as a flower associated with Venus, the goddess of love. It’s a flower that has resonance in many different cultures in Persia, as well as in Europe.” 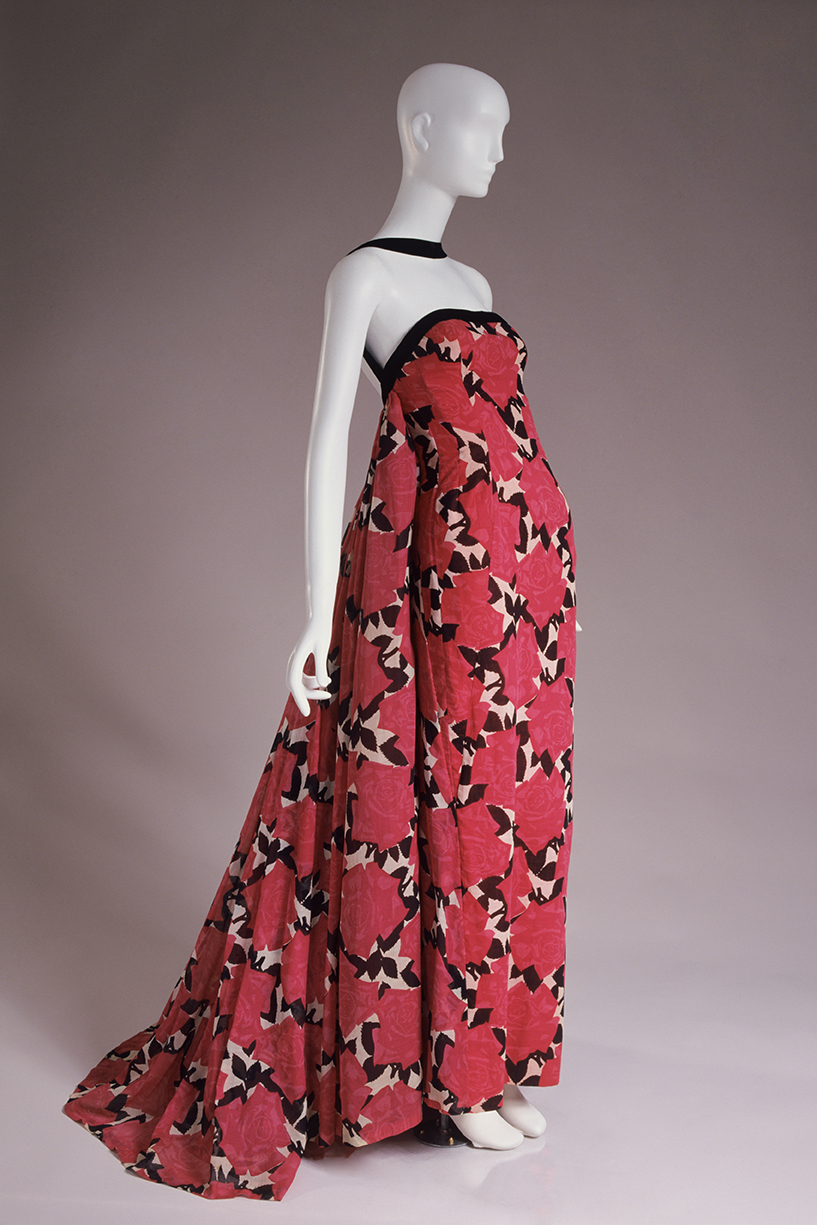 An evening dress designed by Luis Estévez from 1957. Courtesy of MFIT

The idea of layers of symbolism and meaning over the years is something that designers responded to and viewers of the exhibition are responding to that, too, according to Steele. “There’s the whole set of imagery related to flowers, being the sex organ of plants and being associated with feminine beauty and ephemeral beauty. And then there are specific layers of meaning associated with roses with the different colors and the thorns. All of that feeds into the show, which makes it very rich in meaning.”

While the obvious route is to have imagery of roses such as rose prints and embroidery, the exhibition also features the elements of petals and the flower itself, Steele said. An Alexander McQueen jacket with deep crimson rose motifs as sleeves, “a pretty and sweet, jeunes filles” Yves Saint Laurent dress, a samurai 18th century-like punk dress by Comme des Garçons and an abstract dress from Claudia Gisele Ntsama are a few favorite looks. A Charles James dress with a colorful rose-covered bodice, which resembles a bouquet, is another standout, Steele said.

The exhibition was proposed to Steele in 2019 by Amy de la Haye, chair of dress history and curatorship and joint director of the Center for Fashion Curation at the London College of Fashion. De la Haye co-curated “Ravishing: The Rose in Fashion” with the Museum at FIT’s curator of costume and accessories Colleen Hill.

De la Haye cited three sources of inspiration — her mother’s lifelong love of roses, Nick Knight’s photographs of roses that he posts on Instagram and a line of poetry from T.S. Eliot’s 1936 “Burnt Norton” that reads “for the roses have the look of flowers that are looked at.” After reading that line eight or nine years ago, de la Haye said she kept thinking, “I’m going to use that one day.” (Knight’s photos can also be found in his “Roses from my Garden” exhibition at Coach House gallery through October.)

The fact that the museum’s delayed opening arrived when roses are blooming is also poetic, de la Haye said. 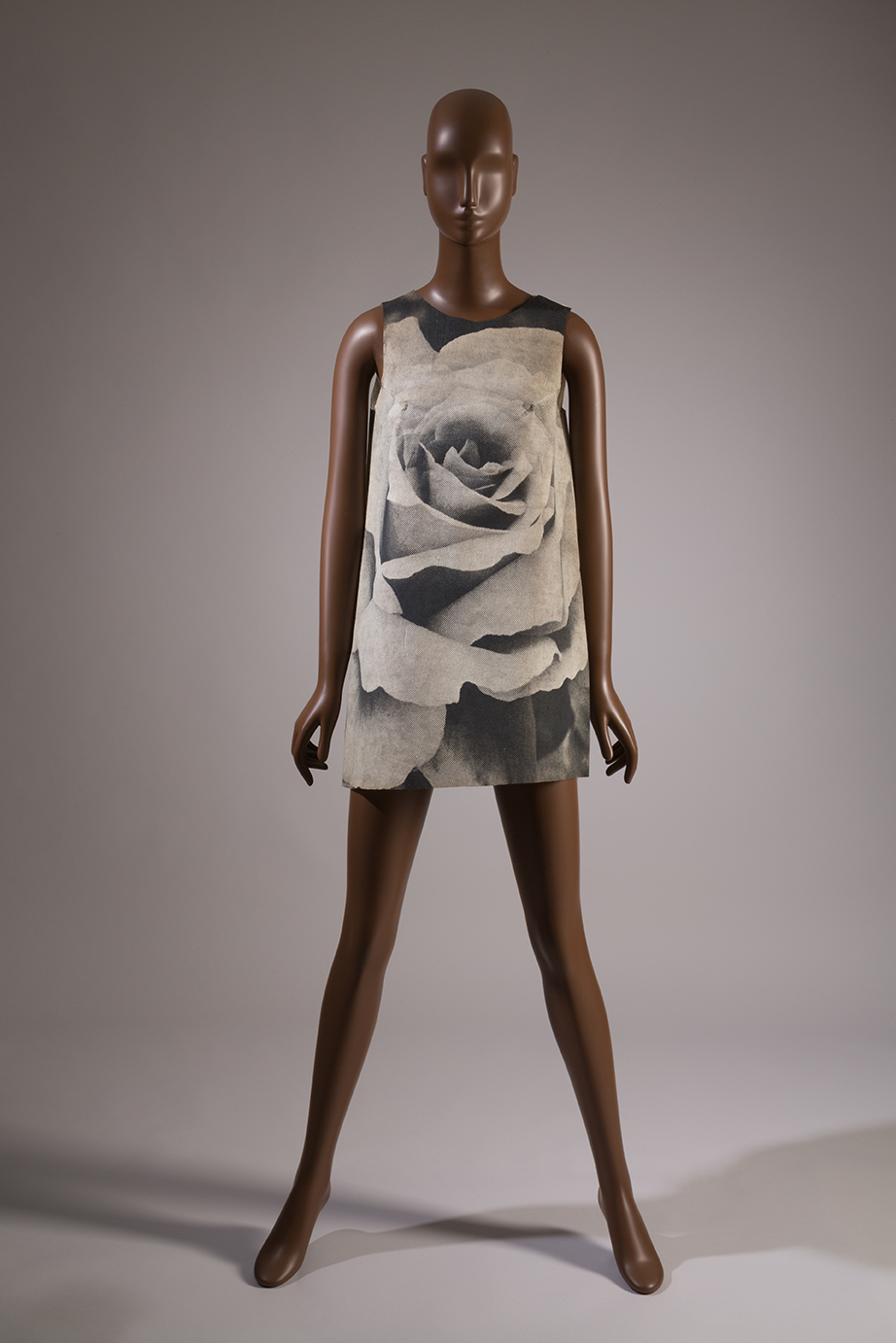 Harry Gordon’s “Poster” dress made of nonwoven paper-like material with a rose print from 1968. Courtesy of MFIT

Referencing the United Nations’ climate change report that was released Monday, de la Haye said the “Ravishing Rose” show is also timely in that sense. All in all, though, “Flowers are always in fashion. Roses are perennially popular. But certainly since 2010, the rose has become increasingly politicized as a motif, for example, for the anti-female genitalia mutilation campaign. Roses have been used for exploring gender identity by designers like Neil Grotzinger, of the Nihl label. We’ve got an outfit from him that combines several types of lace with a rose motif, which he’s cut into a sportswear style and spray-painted.”

The exhibition addresses how flowers were once gender-neutral, with men wearing garlands in Roman times and later rose-scented perfume because women liked stronger scents, de la Haye. That started to change in the 19th century but men continued to wear flowery accents on their clothes. In the exhibition’s companion book and the show, she explores the perception that while a lot of 19th-century men’s wear was plain, there were often small, and partially concealed rose-decorated textiles like embroidered suspenders, printed cotton handkerchiefs and waistcoats including a silk bridal one dating back to about the 1860s that is on view. 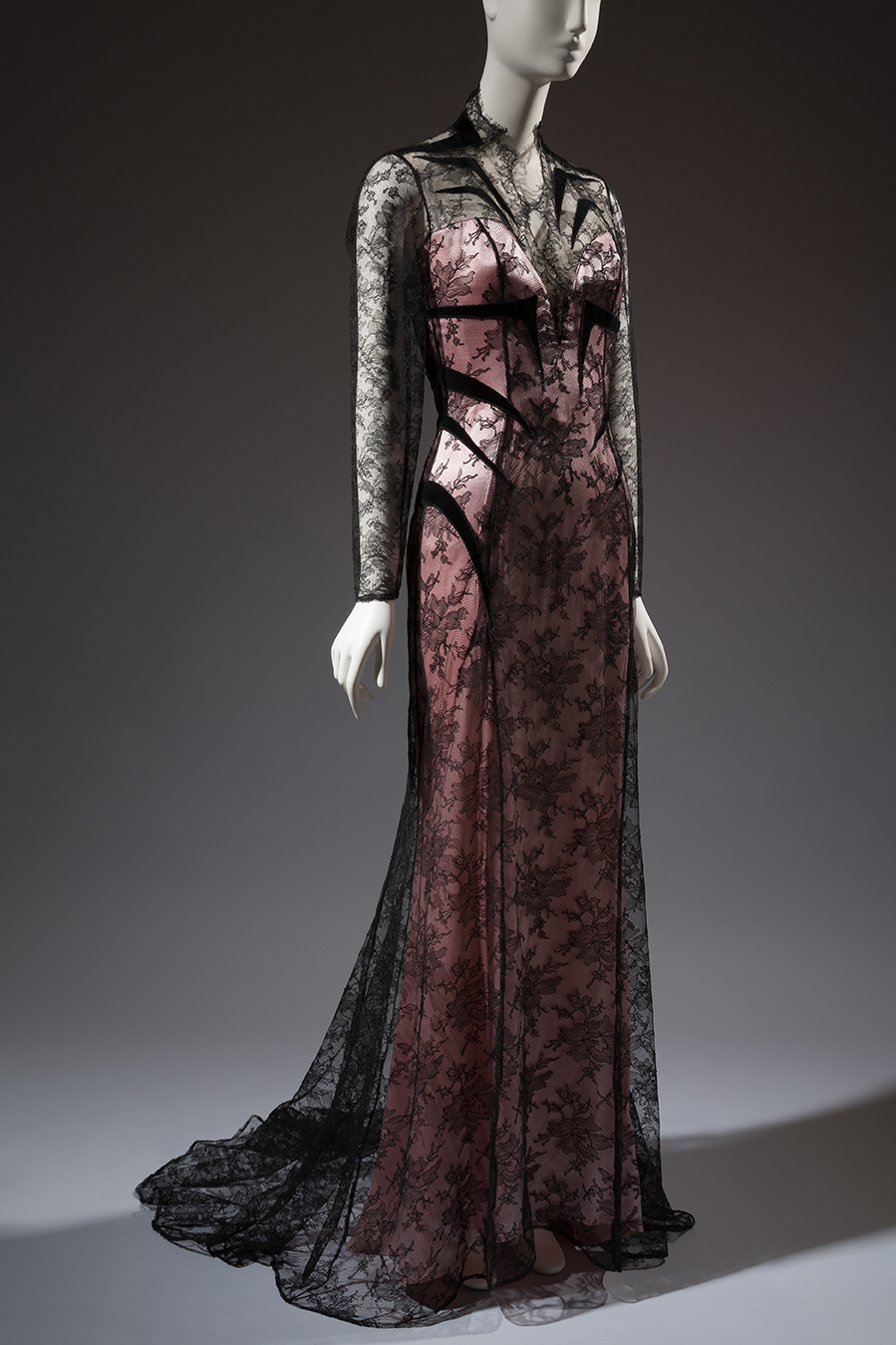 In addition to gendered identities, the show examines themes of love, beauty, sex, sin, rites of passage, transgression, degradation and death. Most of the items on view were culled from FIT’s collection. Speaking of takeaways, de la Haye said: “While we can come, look at and appreciate the most beautiful, highly crafted whatever fashion, not all people can or want to wear designer-level fashion. But the point is that practically everyone can feel transformed by wearing or holding real or artificial roses. As the rose grows in most parts of the world, it does mean that most people can feel transformed by wearing a rose. If you bumped into someone on the street and they had a rose in their buttonhole or in their hair, you would say, ‘What’s the special occasion?’ It still makes a statement.”

In order to show more diverse people wearing roses and how roses interface with the fashionable body, de la Haye has incorporated some studio portraits from the late 19th and early 20th centuries that she bought from eBay. Those images feature people of color, same-sex and heterosexual couples, groups, and individual male and female portraits. Those images show a different element of fashion and are reminders of the symbolism of wearing roses, she said.