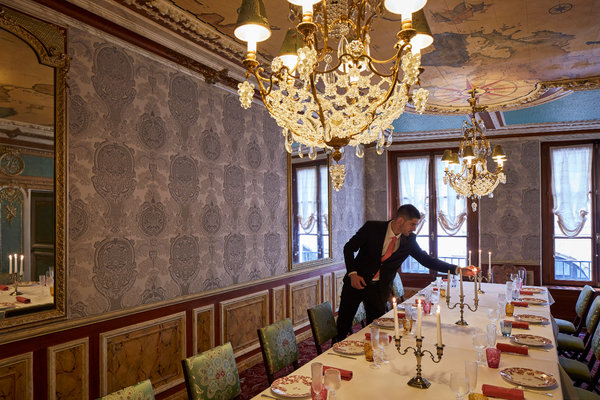 PARIS — “This has always been a house of pleasures — of gastronomy, of the flesh, of drinking, smoking and seduction, of conversation, literature and the arts,” said Benjamin Patou, the jovial, workaholic 42-year-old entrepreneur who has been described in the French media as the king of Parisian night life.

He also is the latest owner of what once was one of Paris’s most risqué institutions, the restaurant Lapérouse, whose grand reopening celebration is scheduled for Wednesday.

The christening during men’s fashion week promises to be an epic event, with a masked ball (“it’s going to be ‘Eyes Wide Shut’,” Mr. Patou said jokingly), nearly 500 guests, torchbearers, costumed actors and a faux elephant stationed in front of the restaurant’s facade at 51 Quai des Grands Augustins. The film director Claude Lelouch is to be on hand with a crew to capture the scene for his next movie, “Les Fantômes de Lapérouse.” And the author Frédéric Beigbeder is working on a collection of short stories about the place, to be published by Albin Michel.

After all, the revival of a fashion house is an old story. But the rebirth of a house more than 250 years old, with a world-class cellar of Burgundy wines; a hotbed of politics, literature and the arts from the time Jules Lapérouse took it over and gave it his name in the mid-19th century well into the 20th; a place that Victor Hugo, Émile Zola, Honoré de Balzac, Colette, Marcel Proust, Ernest Hemingway and the Duke and Duchess of Windsor visited for its famous sauces? That’s something to get even the most jaded style-setter excited.

The bar area and two dining rooms were redesigned by Laura Gonzalez, the interior designer behind such projects as the Pierre Hermé and L’Occitane collaboration on the Champs-Élysées and the revamping of Régine’s. She also refreshed the seven salons and created a new boudoir-like space from a former back office. The whole now resembles a Venetian palazzo compressed into the Orient Express.

The table dressings, menu illustrations and “L” logo that appears on floral china by Bernardaud, frosted glass doors, chair backs and carpeting are the work of Cordelia de Castellane, who also is the creative director of Baby Dior and Dior Maison.

The chef Jean-Pierre Vigato, formerly of the Michelin-starred restaurant Apicius, is in charge of the stove; desserts are by the pastry chef Christophe Michalak.

Mr. Patou is the founder and president of the restaurant and nightspot empire known as the Moma Group (other venues include Manko Paris, a restaurant with a racy after-midnight cabaret, and Victoria, whose downstairs club was designed by Lenny Kravitz). Moma, a privately held company, doesn’t release revenue figures but Mr. Patou said it made 80 million euros (or $89.8 million) in 2018.

The Berluti chief executive Antoine Arnault, scion of the LVMH founder and chairman Bernard Arnault and partner of the model Natalia Vodianova, is a minority owner of Lapérouse, the first time he has invested in a restaurant.

“Lapérouse is a myth and as such immediately brings to my mind both the heritage and storytelling of a beautiful Parisian sleeping beauty,” Mr. Arnault said. “I find that it has many similarities with my activities within the [LVMH] group, where creative talent and heritage go hand in hand.”

Mr. Patou first set eyes on Lapérouse in his 20s, during a brief stint as a press officer there. He has been out to conquer it ever since.

“It was a coup de foudre,” he said, using the French phrase that is the equivalent of falling head over heels. “I told myself that someday it would be mine.”

Last year, he landed his prize, buying the place from the entrepreneurs Jérôme Schabanel and Grégory Lentz. Mr. Patou declined to elaborate on the purchase and renovation costs, saying only that Lapérouse has been his most ambitious project to date.

The corridors still feel as though La Belle Otéro, the legendary Belle Époque courtesan, is lounging right around the corner. Her name is emblazoned on the smallest of the intimate dining salons, one just large enough for a table, two chairs and a love seat. On its walls are restored old paintings of monkeys at play, embossed leather wallpaper and one of the scratched-on Venetian mirrors for which Lapérouse is famous.

Generations of wealthy and influential power brokers came here to woo women not their wives — and restaurant legend has it that demimondaines who received diamonds from their lovers used to test the gems’ authenticity by scratching the mirrors’ surfaces. Over the years it became a ritual and among the guests who have scrawled for posterity are Madonna, Amber Heard, George Clooney and Kate Moss, whose contribution reads: “It’s 2 late 2 go 2 bed.”

In couture’s golden era of the 1950s and ’60s some women, too, would slip over to Lapérouse to see and to seduce without being seen. The restaurant’s published history includes Hubert de Givenchy recounting a visit to study the sumptuous décor for a loyal client who had requested matching dresses in gold, red and green, but with zippers in back so her lovers could remove them easily.

Lapérouse became one of the first Michelin three-star restaurants in Paris, in 1933 (the other was La Tour d’Argent). But it lost its luster as the century wore on, becoming something like the Rainbow Room of Paris, where well-to-do families would celebrate their young passing the baccalaureate examination, or an engagement. Mr. Patou recalled bringing a date here; years later, he said, he returned to celebrate his son’s First Communion.

Fashion brands have used the place for private dinners, presentations and shows. Now, presumably, they’ll be back in force. And next spring, as part of the renovation of the Hôtel de la Marine on the Place de la Concorde, Mr. Patou and Mr. Arnault plan to unveil a Café Lapérouse flagship, with a menu developed by Mr. Michalak. It will be in company with a new Moma Group restaurant overseen by the chef Jean-François Piège, of Le Grand Restaurant, La Poule au Pot and Clover Grill.

All of which illustrates why Mr. Patou said he considered Lapérouse “the observatory for Parisian life. Anything can happen here. There was the Revolution, the Commune, the flood of 1910, May 1968. You could recount the entire history of Paris and of France without going anywhere else.”