A mum has revealed how she used free wallpaper samples from Wilkinson’s to transform her stairway wall.

Toni Smith, 43, from Bournville cut out over 1,000 hexagons from Wilkinson’s wallpaper and pasted them onto the wall. 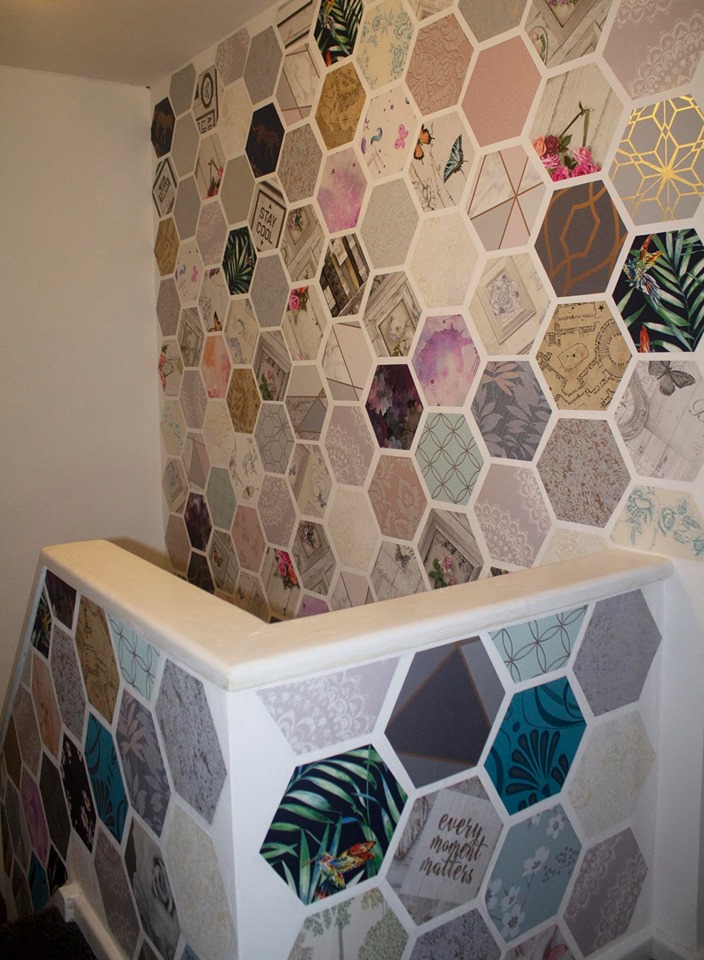 The DIY project cost just £15 and took just two weeks to complete after the single parent spent over 16 hours cutting out hexagon shapes.

Ms Smith believes she has saved nearly £300 – and estimated having the wall papered professionally would have cost her at least £300 to cover the area in one paper.

The mother, who recently set up a business of upcycling old furniture, moved house just before lockdown and was keen to make the house a home.

Toni, who is mum to two daughters, aged 21 and four, got the idea of using wallpaper samples after having paper leftover once she had decorated the girls’ rooms. 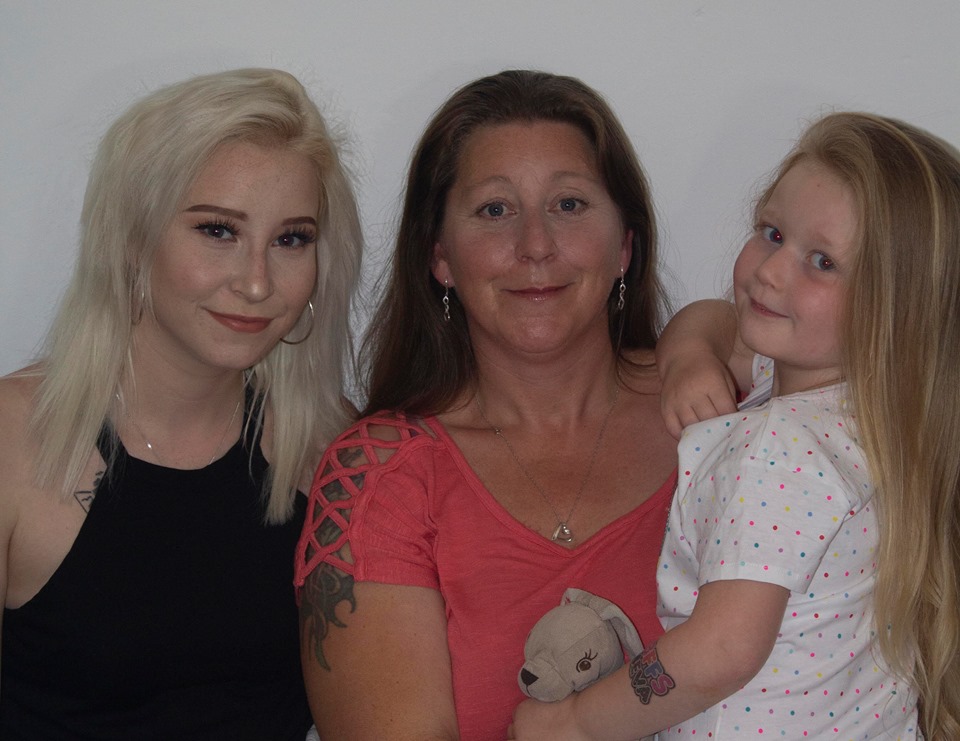 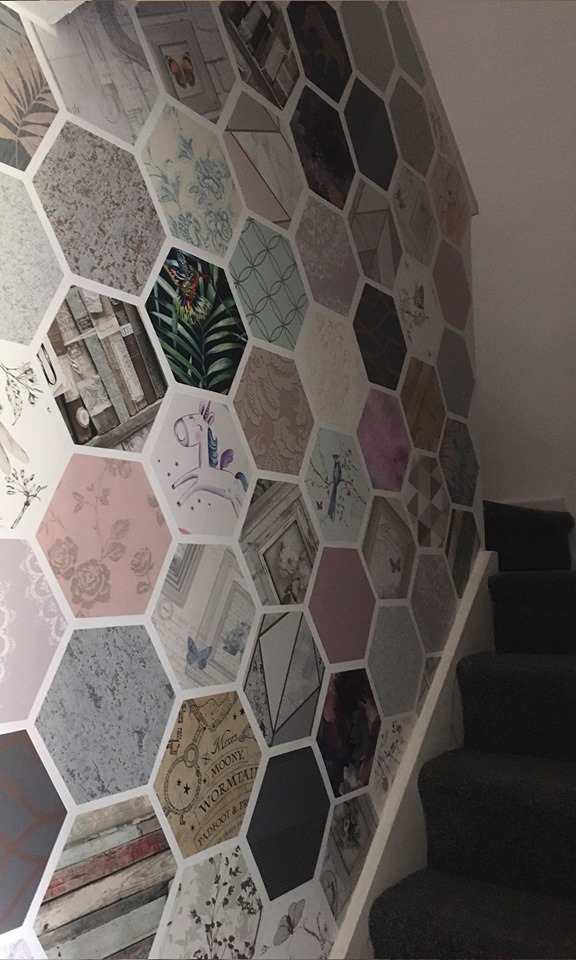 She said: "I decorated the girls' bedrooms first and had some leftover wallpaper so started cutting out a few different shapes like circles, triangles, octagons and hexagons.

"I decided I liked the hexagons best and I then went from there.

2I started off by stripping the old wallpaper off, sanding and filling in holes and then painting the walls with matte white paint."

Toni planned how she would stick the hexagon wallpaper shapes to the wall by using blue tack to hold them in place. 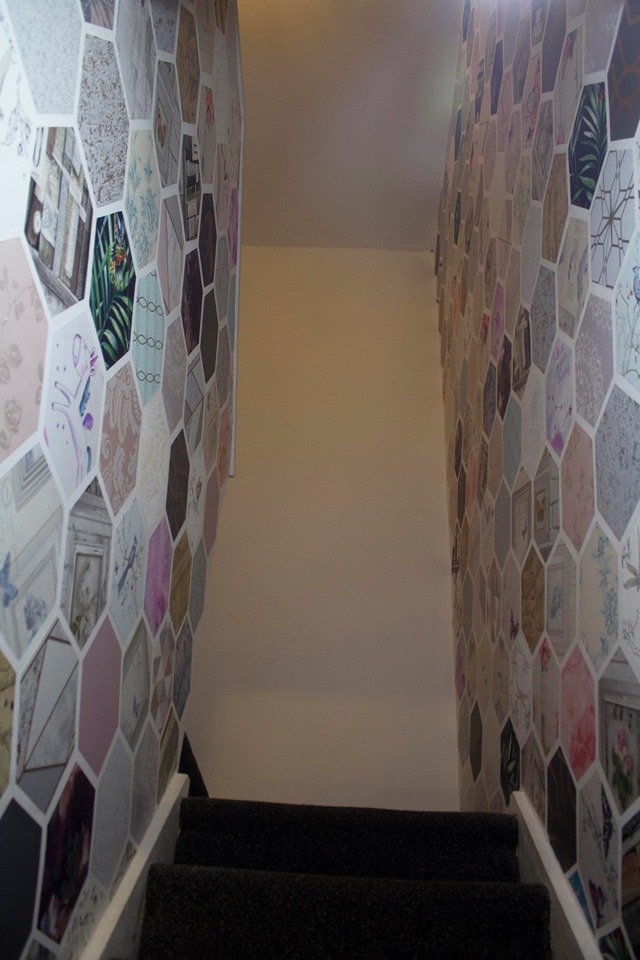 The mother said she got the idea of collecting paper samples after using them in her upcycling projects.

She has always regularly visited Homebase and started to visit Wilkinson’s in lockdown as it is within walking distance and she doesn’t drive.

She said: "I asked a member of staff if samples were free and I took advantage of the opportunity!

"It took me two trips to Wilkinson’s to collect enough samples to get all I needed for the wall.

"I collected 31 from Wilkinson’s and 10 different ones I already had at home, I think I used just around under 1000 hexagons

"I spent 4 evenings after my youngest had gone to bed cutting all the hexagons out. About 16 hours and very sore fingers later, then it took me 2 weeks to complete the walls in between looking after my little one." 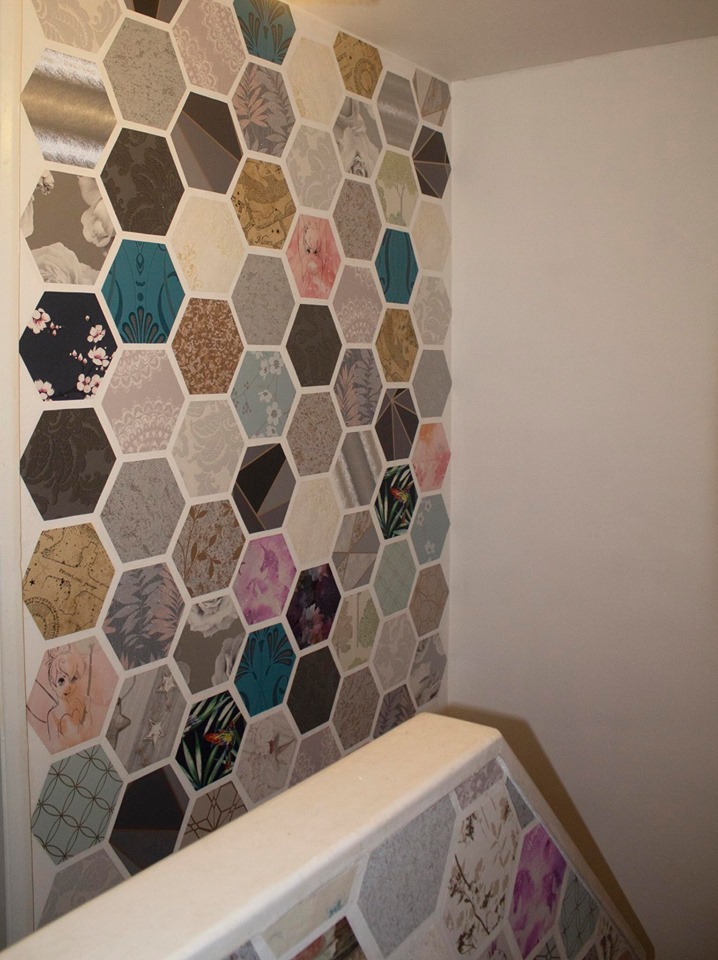 After ensuring the first hexagon was straight, Toni continued to paste the cut outs onto the wall – trying to make sure the gaps were the same using her eye.

She said the wall DIY transformation cost her just £15 – as she used Wilkinson’s white matte emulsion for £12, Wilkinson’s solvite wallpaper paste for 3.49 and gloss she already had in the house.

And of course the wallpaper samples which were free!

The mother was left so impressed by her DIY skills, she also found a new carpet online for £118 – which she decided to purchase and fit by herself.

Toni shared her DIY project to Facebook, writing: "Finally finished my hall stairs and landing, took about 2 weeks and just under a 1,000 hexagons. 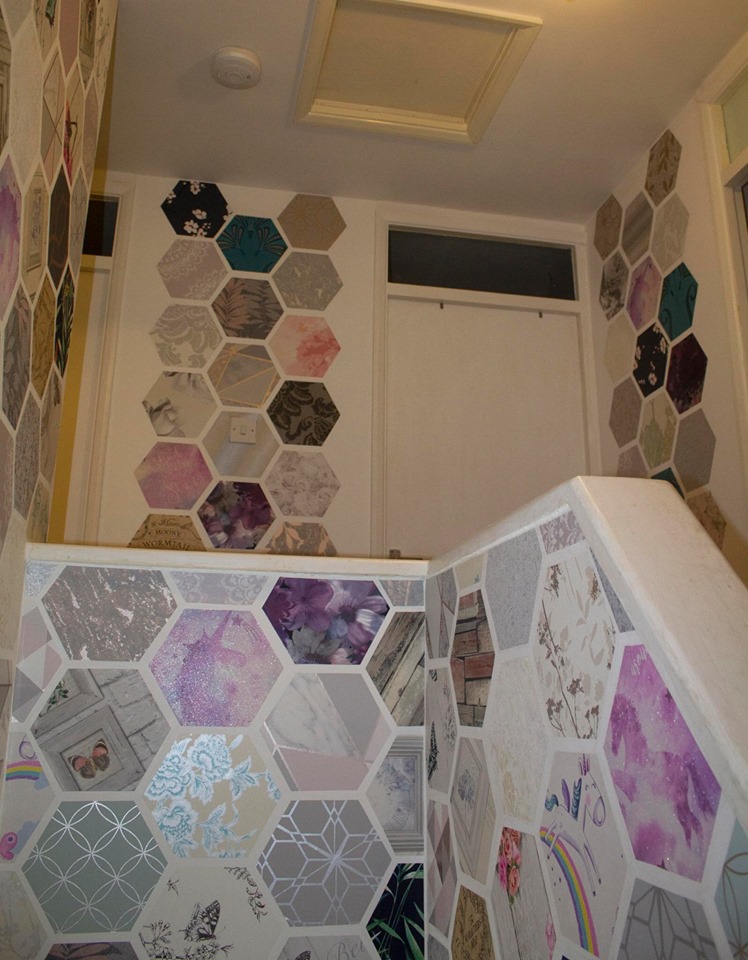 "Total cost was £130 that was including the carpet, all the paper was samples from Wilko’s.

"Not to everyone’s taste but I love it!"

The post instantly raked up hundreds of likes and comments with many strangers praising Toni’s creativity.

She said: "Originally I wasn’t going to post it on the DIY page due to the worry of negative comments but my eldest daughter kept pushing me to do so.

"I was actually amazed by the positive response from others in the group and the many questions I had on how I’d achieved the result.

"When I first started I was a bit worried as I was getting further into it that it was going to be a bit too busy but since seeing the finished product I am very pleased and I honestly do love it.

"All my family that have been able to come over since lockdown has eased have been very impressed and have since asked me to do the same in their homes."

We also shared how a mum who couldn’t afford new carpet WALLPAPERED her floor for just £23 & people are praising the tip.

And a family totally revamp their worn out garden during lockdown complete with seating areas, a fireplace and a playground.

Plusa woman transforms her boring whitewash bathroom into a jungle paradise using bargains from Ikea and The Range.