Even without final data from New York City about how many people remained in the city during the pandemic, an abundance of anecdotal evidence exists about the exodus of its wealthiest residents.

At the writer Molly Jong-Fast’s Upper East Side apartment building, less than half a dozen of the 47 units were occupied in April 2020, she said. Mark Armstrong Peddigrew, a personal trainer in Lower Manhattan, said that roughly 85 percent of his clients left town.

At Loaves & Fishes Foodstore, a grocer in the Hamptons where lobster salad costs more than $100 a pound, there were 30-minute lines on Thursday mornings during the off season.

Now, as the rate of vaccinations increases, the blooming bulbs around the city feel like a metaphor for more than just spring.

New restaurants are opening, stores are filling up, comedians are again getting heckled at the Comedy Cellar.

Rationally, most New Yorkers know these are good things. They want to conquer the pandemic, and that involves saving the economy as well as lives.

But the pride they take in their own toughness is superseded only by their propensity to complain. And these days, a lot of gripes are aimed at those who left.

Not the ones who departed because of lost jobs, underlying illnesses or the need to take care of aging parents, said Jeremiah Moss, 50, who in 2007 started “Vanishing New York,” a blog that chronicled the businesses that closed because of rising rents and gentrification.

Instead, Mr. Moss said that the resentments harbored by him and his friends relate to the “large group of people who left because they didn’t know how to be in New York without consuming, without being in bars and restaurants and stores.”

“Now they are flooding back and don’t understand that among those of us who stayed, there’s a real sense of being invaded, or re-invaded,” he said. “It’s like, ‘Who the hell are you? You don’t just get to pick up where you left off.’”

James Dorje Halpern, 30, an owner of Ponyboy, a bar in Brooklyn, said he lost around a million dollars in revenue during the pandemic. Yet he called 2020 “the best year of my life.”

He attributed part of this to time taken off, which became a springboard for “personal growth.” But he also took great joy in seeing fewer Wall Street types and so-called digital nomads, the sort who’d worked near the meatless meatpacking district for Google or similar.

Kim Hastreiter, the former editor of Paper Magazine, who lives by Washington Square Park, saw her apartment building empty out. Not running into some of her neighbors was sad. But the lack of New York University students? “Heaven,” she said.

“The people I knew who left were all horrible people to begin with,” said Edoarda Schoch, a 26-year-old graduate student at Columbia University. “A former boss of mine left for his house in Mattituck. I was like, ‘Good riddance!’”

On a recent afternoon, Ms. Schock was at the Tompkins Square Park dog run. Even with her toy poodle, she looked with her motorcycle jacket and pixie haircut like an East Villager in the mold of Kim Gordon.

Nearby Brooke Lima, 27, was watching one of her two rescue dogs cavort with a Welsh corgi while the other begged for treats.

Ms. Lima had grievances of her own, namely the return of the golden doodles and “other dogs who look like they were grown in a lab.”

Some of the precious pooches arrive with “finance bros,” she said, who pace the run conducting business deals over AirPods. Others are tended to by young women with Gucci disco bags, an accessory that in her estimation is the only version “of haute couture or status that can be bought by a person who makes $50,000 a year and has six roommates,” she said. Usually, she added, these are the sorts of people who “get possessive about their dogs’ tennis balls.”

The writer Sloane Crosley, 41, speaking a few days later, was more measured about the millennials she knew who fled New York City.

“I didn’t take it personally,” she said. “I don’t want to be one of these people that blames an entire generation of millennials for things, but I do think there was a group of them who came to New York expecting a certain level of comfort and then, at the first whiff of Covid, upped and left.”

Then she would see their social media posts, which she said reeked of privilege.

“You have these people posting one slide of their beautiful country house — that’s what we’ll call them, slides — and then the next one up would be an image of them crowded into some restaurant for someone’s birthday party the year prior with the hashtag ‘missthis,’” Ms. Crosley said. “I just thought, ‘I don’t doubt that you miss this, but you know what else I miss? My neighbor, who was carted out on a stretcher.”

New Yorkers who hung around found transcendent moments even among widespread tragedy. 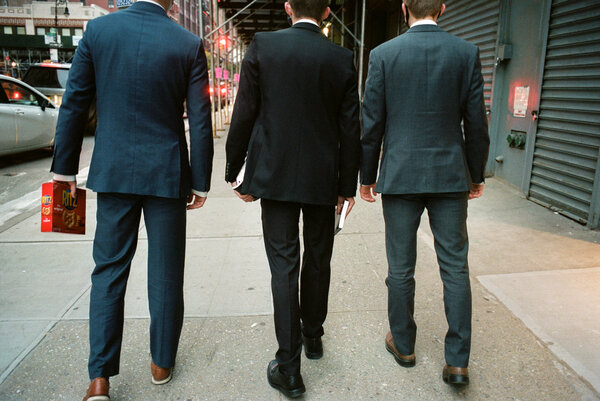 For Faye Wattleton, the former president of Planned Parenthood Federation of America, one of the biggest was watching people of all shades and stripes take to the streets in droves, having finally woken up to the horrors of police brutality that had been known to her and so many other Black people for centuries.

The subway, with plummeting ridership, ran with greater efficiency.

Yes, Ms. Wattleton, 77, had spotted a woman on the car the day before, ranting at her fellow riders with a ferocity that recalled the nadir of the crack epidemic. But Ms. Wattleton said, “the trains now are spotless.”

“And there’s almost always a seat,” said Heath McBride, 51, a photographer who on a recent Monday was riding the L train from Manhattan back home to his apartment in the Bushwick section of Brooklyn.

Less traffic also meant that taxi fares were often half of what they were a year ago.

Along with lower gas emissions, there was less horn-honking.

Trellised sheds and sparkling yurts became part of the cityscape, as New Yorkers dined outside in restaurants they might never have gotten a reservation at otherwise. What else was there to do?

Invariably, there are going to be complaints about the return of those who bring an end to all of that.

Cheryl Dunn, 63, a photographer and documentary filmmaker, described the Lower East Side as having been transformed by a sense of community. “You go in a shop and people have time to have a conversation,” she said. “Maybe they’re starving for it, but it feels like a little village in a way it never did a year ago. There’s an energy. ‘I’m here, you’re here, we’re not tourists, we’re part of this community.’”

Mr. Moss of Vanishing New York had a similar experience. Somehow, he said, amid social distancing, he’d felt closer to his fellow New Yorkers than he had in years.

The nightlife promoter Ladyfag, 44, lost a year of income and Ben Maisani, 48, lost his bar, Bedlam, at the start of the pandemic. But the drag queens they knew were once again getting $2,500-a-month apartments in the West Village.

Last August, Samara Bliss, 30, and her partner Graham Fortgang, 29, were able to lease a 2,500-square-foot storefront in South Williamsburg, which they turned into an artist gallery and recording studio called the Locker Room. They got the former dentist’s office after the rent was slashed by thousands of dollars.

In January, the gallery put up a billboard on Sunset Boulevard in Los Angeles that read, “New York is dead, don’t come back.” They also hired a prop plane to fly a similar banner along South Beach.

The advert was meant to be humorous, Mr. Fortgang said, but it was also a throwing down of the gentrification gauntlet, rooted in anxiety about whether this new bohemia could survive the lights coming back on.

Ms. Bliss is now planning to install mock tollbooths in Williamsburg and SoHo that read: “Welcome back to New York to those who fled. The readmittance fee is patronage of your local businesses.”

The plutocrats of Park Avenue were already receiving pleas in Palm Beach, Aspen and elsewhere to go back whence they came.

The argument that without their dollars, New York City could not thrive had echoes of 2001, when, after the Sept. 11 attacks, the city’s business and fashion elite rebranded shopping as a civic duty.

A recent entreaty arrived in late March on Facebook, courtesy of Brian Ellner, a former consultant to Michael Bloomberg.

In it, Mr. Ellner, 51, described the opening of Sona, a fancy Indian restaurant in the Flatiron district as “a rebirth, a comeback.” He used it as a rallying cry to implore fellow New Yorkers to come home. “Return from Miami,” he wrote. “Give up the organic mushroom farm upstate. Yeah it was fun for a minute but this is New York City!”

Some agree with his basic argument.

Eric Kober, 66, a senior fellow at the Manhattan Institute who specializes in housing policy, said that without the taxes from the rich, the city would likely have to slash social programs and lay off thousands of employees. That, he noted, was what happened in the 1970s, when the city faced a financial crisis and the population dwindled.

But Ms. Hastreiter argued that a downturn creates its own opportunities: the city turned downtown lofts over to artists at rock bottom prices. SoHo and TriBeCa began to thrive. Then, everyone else rushed in. That was why she disliked Mr. Ellner’s post.

“It makes me want to puke,” Ms. Hastreiter said. “I hate when I hear that. Come eat in the restaurants. Go shopping. It’s upside down and backwards. Make New York human again. Make it creative again. That’s what I want. ”

Kailee Scales, the fortysomething former managing director of the Black Lives Matter Global Network, shared some misgivings with the “elite argument” Mr. Ellner put forth. But she agreed with him that the city’s various classes must unite to rebuild successfully.

“In order to dismantle oppressive, exclusive systems, we require the participation of those who have traditionally benefited from the most oppressive practices,” she said. “We don’t need the privileged elite to disappear and spread economic disparity to other markets. We need people to roll up their sleeves and help transform.”

Moreover, there’s a reason that those lamenting about a lost bohemia are less likely to be home care workers in housing projects than college graduates in creative industries. It’s easier to talk about a city losing its soul when your first worry isn’t winding up in its streets.

Khalil Gibran Muhammad, a professor of history, race and public policy at Harvard University, offered something else. “Wealthy people have long convinced themselves that without them, all the wonderful things in civilization and society wouldn’t exist,” he said. “This was Andrew Carnegie’s argument. This was the argument of the robber barons of the Gilded Age. But no one has ever proved it correct.”

Still, Mr. Muhammad, 48, thought there was no sense in panicking about whether the one percent would return.

“Because I have no doubt they will,” he said. “My best guess is that many of them are bored to tears. They’re going to want the playground they’re used to and the prestige that comes along with it. All the galas. The corridors of Fifth Avenue and Sixth Avenue in Midtown are a glorified version of high school for people. It’s the quad, the place to be seen.”