FLORENCE, Italy — “Fifteen minutes ago, I may not have been about to say that,” the multidisciplinary art star Sterling Ruby said backstage just after the stellar debut of his fashion label S.R. Studio. L.A. CA.

He was referring to the prospects of adding “designer” to the list of occupations on his already jam-packed résumé.

“But I really enjoyed it,” Mr. Ruby said of the pressure to produce, after a yearlong gestation, a first collection that was so dense with ideas it felt like several collections mashed up on a single runway. 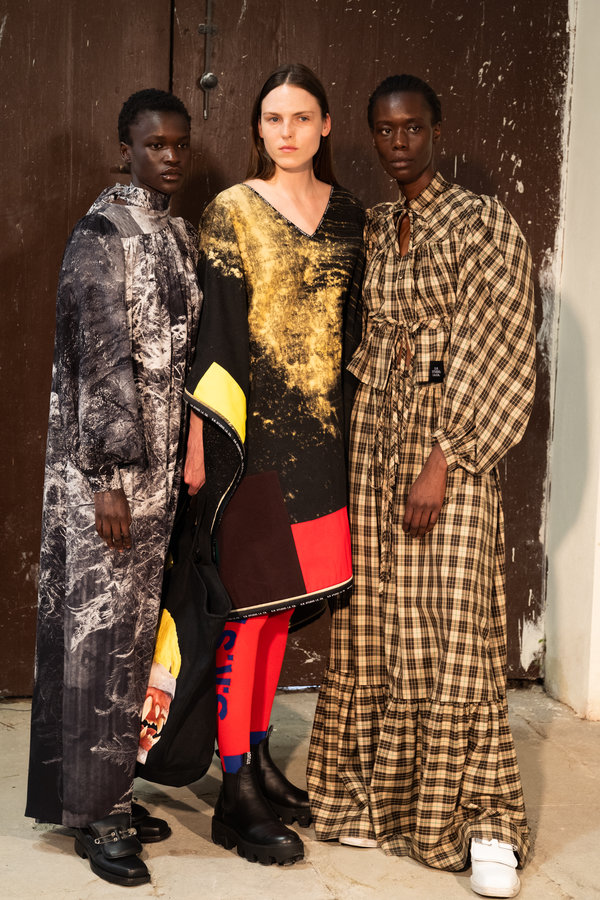 Mr. Ruby was the special guest designer at Pitti Uomo, the big men’s wear trade fair, a distinction previously experienced by Virgil Abloh, now the men’s wear director at Louis Vuitton. This time Mr. Abloh had flown from his label’s headquarters in Paris to join a front row studded with heavy-hitting art collectors, some of whom had also jetted in, on private aircraft, from Switzerland where they had been attending that other giant trade fair, Art Basel.

It was heady stuff for a first-time designer. And yet, notwithstanding his impressive client base and apex predator status in the art world, Mr. Ruby spent the moments before the show fussing backstage with the drape of a bulky sweater that looked as if it had been knitted by a Cyclops and also wielding a lint roller.

“I’m a little manic,” said the artist, whose practice has encompassed not only the post-apocalyptic ceramic vessels on which he made his reputation, but soft sculptures, design collaborations with Raf Simons (the two are close friends) at Dior and Calvin Klein and a photographic series documenting maximum security prisons across the United States from the air. The scale of his studio in the gritty industrial bowels of Los Angeles gives some sense of the scope of Mr. Ruby’s ambition. It covers 120,000 square feet spread across nearly four acres.

Born on a United States military base in Bitburg, Germany, Mr. Ruby, now 47, moved in his youth to Baltimore and then to rural New Freedom, Pa., in those days at the heart of Amish country. He was a diffident student, an outsider in a place he has often referred to as the middle of nowhere. He worked in construction and harvested tomatoes before entering art school — his design portfolio included drawings of cats and fruit bowls. All along Mr. Ruby has customized his own clothing, at first with patches representing Black Flag and other punk bands he was following, and then, in recent years, with leftover fabrics systematically saved from his art productions.

“My mother sewed, my grandmother sewed, my aunts sewed,” Mr. Ruby has said. It was his Dutch-born mother who had taught him the craft on a bulky metal Singer machine that he still owns.

The autobiographical elements that vascularize nearly all of Mr. Ruby’s artwork were so forcefully present on his runway that they obliged a viewer to consider how often fashion shows are about little more than the fact of their own occurrence. It was not necessary (although it helped) to know about the artist’s reverence for craft, his appreciation for the accidental in art or his upbringing in a place where the neighbors quilted and drove to town in horse-drawn carriages.

That all came through in the clothes. There were acid-washed blue coveralls, spaghetti-strap sheaths (worn by women; although the show was held during a men’s wear week, Mr. Ruby offered designs that were largely gender neutral) worn atop trousers with vast bag legs reminiscent of Rick Owens. There was spatter-dyed work wear resembling the items Mr. Ruby installed in a vitrine for a 2016 show at the Sprueth Magers gallery in London.

There were stiffened ponchos that could have been uniforms for members of some survivalist cult. There were dresses photo-printed with burning candles and weed-strewn lots, photographed by Mr. Ruby’s wife, Melanie Schiff. There were images of fruit and tools collaged onto pants and left afloat on a ground of denim. There were “Kimmy Schmidt”-style chastity dresses, a quilted middy and, on one model, a vinyl tabard printed with the cover work from “Hex,” a 1972 book about murder among the Pennsylvania Dutch.

It feels dated now to talk about the sniffy attitude the art world traditionally took about fashion. Plenty of other artists have expressed a love of clothes and the fashion world in their work. What sets Mr. Ruby apart is his refusal to draw distinctions between one form of creative practice and another. “Outside of the logistics of putting together the collection and the garments — in the kind of production of it — I don’t see it as any different to making a sculpture or a painting,” he said.

In a weird way, he added, making garments was more liberating, perhaps less hermetic, than running a vast art industrial complex where scores of helpers assist him in firing monumental ashtrays or organizing the logistics of documenting the nightmarish landscapes of places like Pelican Bay State Prison in California.

By breaking the collection into separate elements Mr. Ruby was also introducing lessons learned from an art market that has made him a millionaire many times over.

That is, some pieces went on sale online immediately after show, like print editions (a multi-pocket barn jacket the color of a grass stain costing $1,390, say, or a gnarly black T-shirt collaged with an animal skull for $595); some will be presented to market in two later commercial phases.

And some will be unique works created by the artist’s own hand.