Every once in a while, a makeup brand comes along that’s impossible to ignore, and Essence is one of said brands. Collectively, the best Essence mascaras have earned hundreds of thousands of reviews across the internet, most of them overwhelmingly positive — so which one is best-suited for your specific makeup routine? Some would argue that you can’t go wrong with any of them (especially considering they’re all cruelty-free and about $5 each), but pinpointing your personal lash goals may help you to narrow down the best pick for you.

While just about every Essence mascara is highly rated, affordable, PETA-certified cruelty-free, and designed to emphasize your lashes, different products serve different purposes, and that’s due to their slightly varying formulas. Some are waterproof, some resist flaking and smudging, some are designed for falsie-like volume, and some provide a little bit everything.

Scroll on for the four best essence cosmetics mascaras on the market, according to thousands upon thousands of high reviews. (There’s also a primer at the bottom, which you can partner with your favorite mascara — Essence or any other brand — to condition your lashes and boost volume even further.)

We only recommend products we love and that we think you will, too. We may receive a portion of sales from products purchased from this article, which was written by our Commerce team. 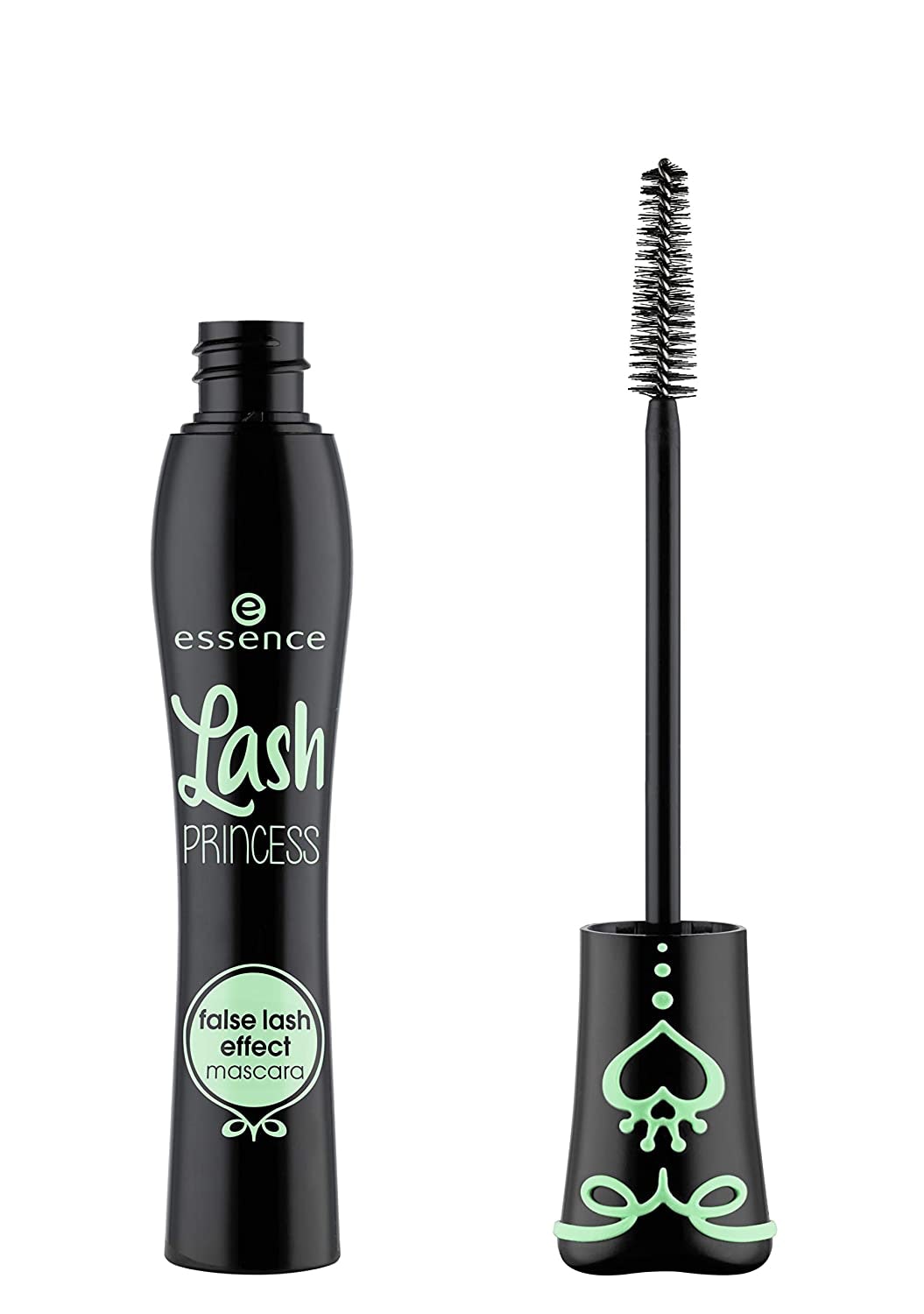 Essence’s Lash Princess mascara is my everyday go-to, but I’m not the only one. Currently, it has more than 90,000 reviews on Amazon, not to mention a 4.4-star overall rating and best-selling status. People are "obsessed" because it has a cone-shaped brush alongside a bold, flake-free formula, both of which deliver dramatic, voluminous lashes that last all day — all for $5 a bottle. It’s cruelty- and gluten-free, too. If you’re looking for a great all-around mascara that checks most of the boxes while remaining extremely affordable, this one’s a safe bet. However, if you’re looking for a waterproof formula, scroll on to the next option.

One reviewer wrote: "This mascara works amazing! It fans out your lashes and really lengthens and thickens them a lot and without many coats. […] It’s not clumpy and doesn’t smudge and it’s easy to take off. I can’t believe how well it works for the price! I usually pay $30 for name brand mascara, but this is just as good and not as clumpy." 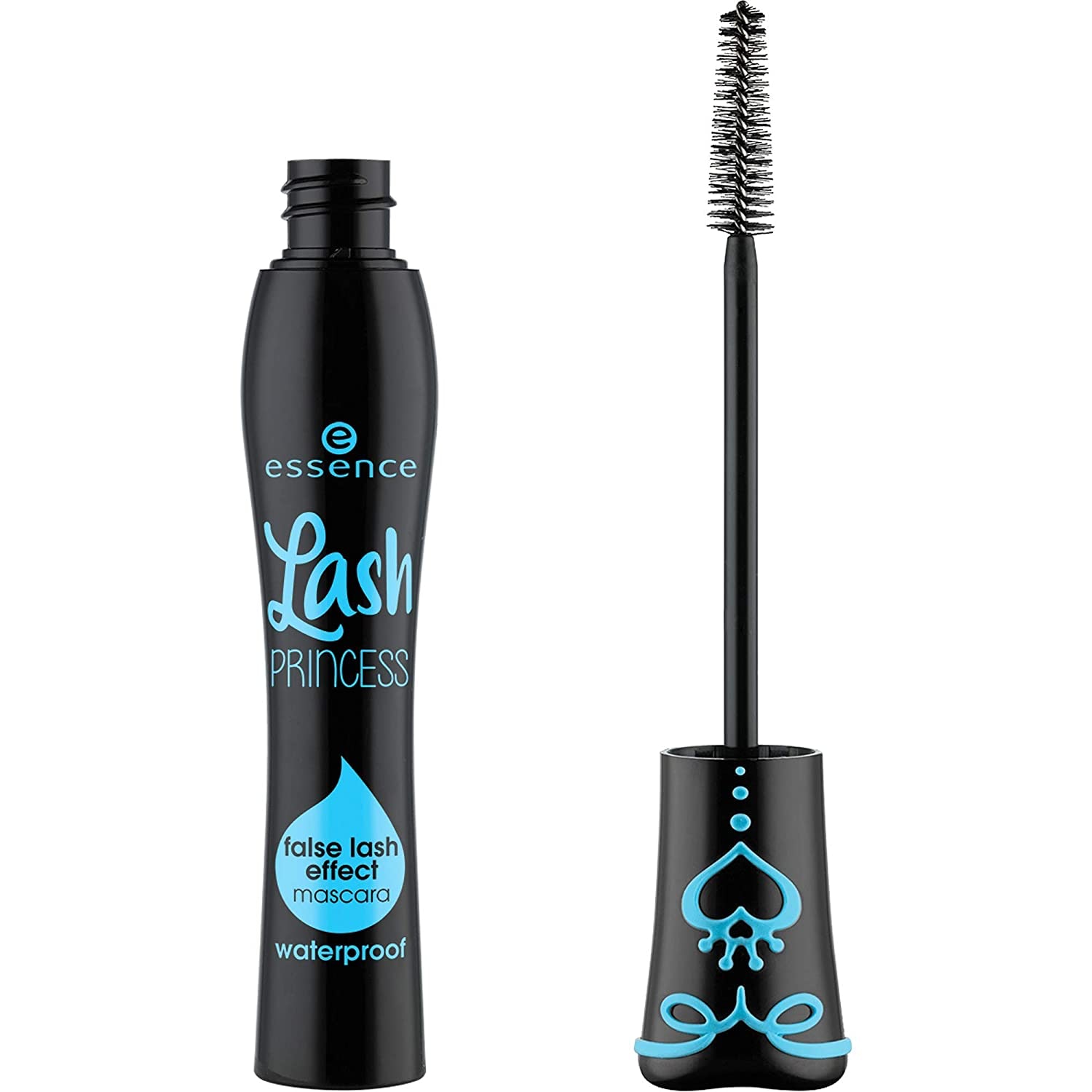 This pick is the waterproof version of Essence’s Lash Princess (meaning it’s virtually the same formula with added staying power in the presence of moisture), but it deserves its own mention for several reasons: First, it truly does last all day, even through swimming, sweating, and showering. Second, it delivers serious volume without flaking, fading, and clumping — and it has the same cone-shaped fiber brush as the original for effortless application. It’s also cruelty-free. Finally, it costs $5, just like the original. When you’re ready to take it off, reviewers say coconut oil helps to loosen it up.

One reviewer wrote: "One of the best mascaras I’ve ever bought! When it says WATERPROOF it means what it says! First time applying it it lasted a week! I finally had to put coconut oil on my face to remove it! It’s worth the money!"

3. The Best Essence Mascara For Volume 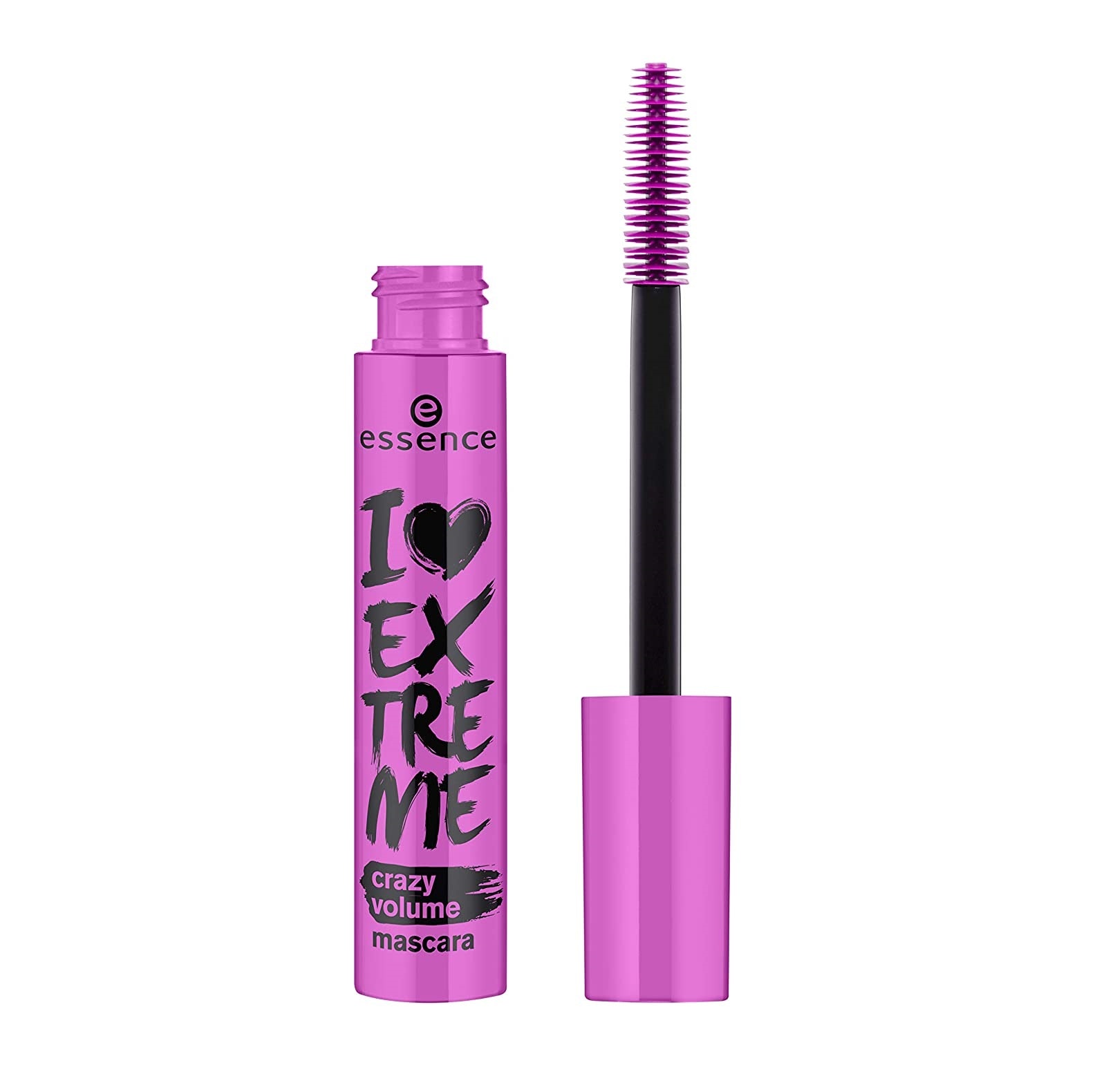 If you’re looking for really intense volume, look no further than the I Love Extreme Volume mascara. Again, each tube is just $5, but this formula has a bold, creamy texture that builds on itself, not to mention an oversize plastic brush that coats every lash. The result, according to reviewers? "My lashes are so long and thick when I wear this, it looks like I’m wearing false lashes," one fan wrote. Choose between two volume-focused formulas as well as waterproof and curl with volume varieties, all of which are paraben- and cruelty-free.

One reviewer wrote: "As a licensed makeup artist and esthetician, I am highly critical of mascara. I have tried a wide range from cheap brands to very expensive ones. […] After applying this mascara, my middle lashes literally touched the top of my eyebrow arch." 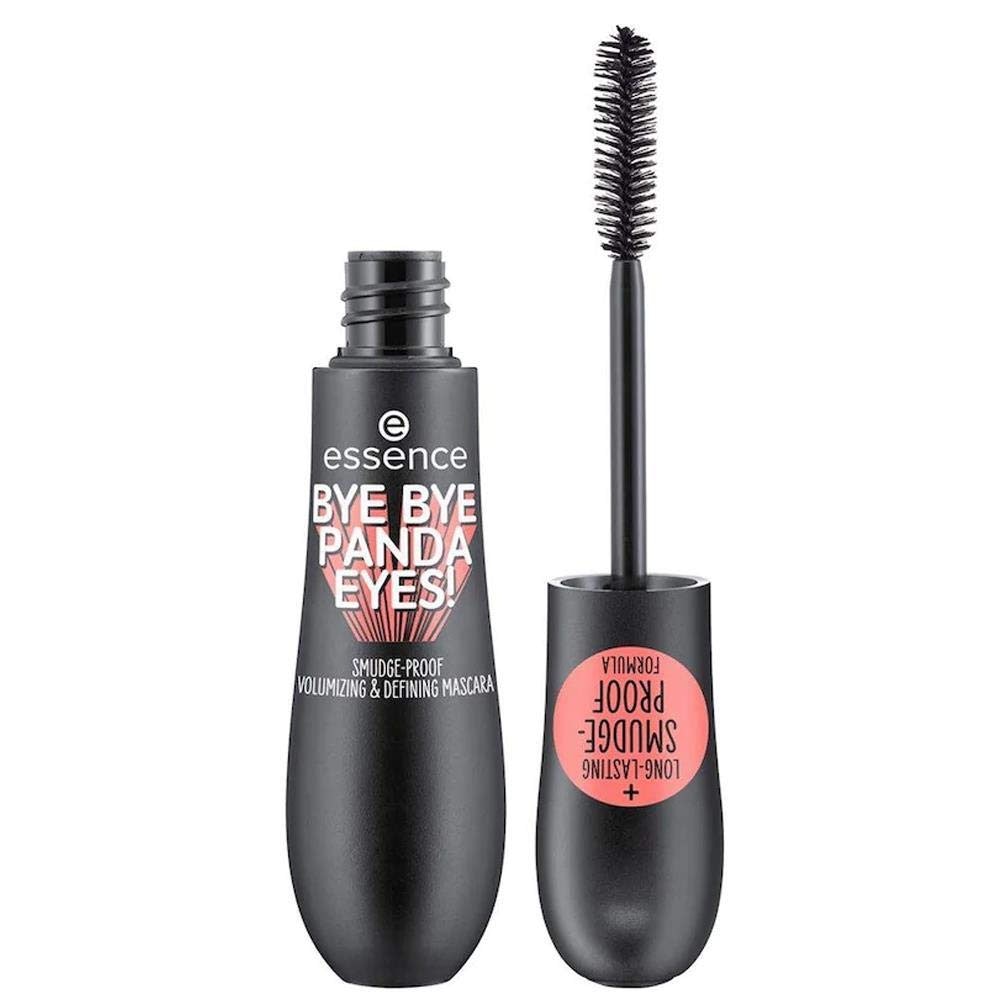 Some people want all-day staying power, but they don’t necessarily want to deal with a hard-to-remove waterproof formula. If that describes you, Essence’s tubing Bye Bye Panda Eyes formula is a great option. Unlike standard pigmented mascaras, this one wraps each individual lash in a tube-like enclosure. As a result, it won’t smudge, flake, or fade, even in the presence of mild moisture — but when you wash your face with warm water and just a bit of pressure, the tubes slide right off, leaving your lashes clean and lightweight. That way, you can get long-lasting volume without scrubbing.

One reviewer wrote: "LOVE. […] I’ve never had it run in hot weather, it gives curl and lift and and it’s a good shade of black. When I want to wash it off at the end of the day it comes off cleanly and doesn’t leave raccoon eyes." 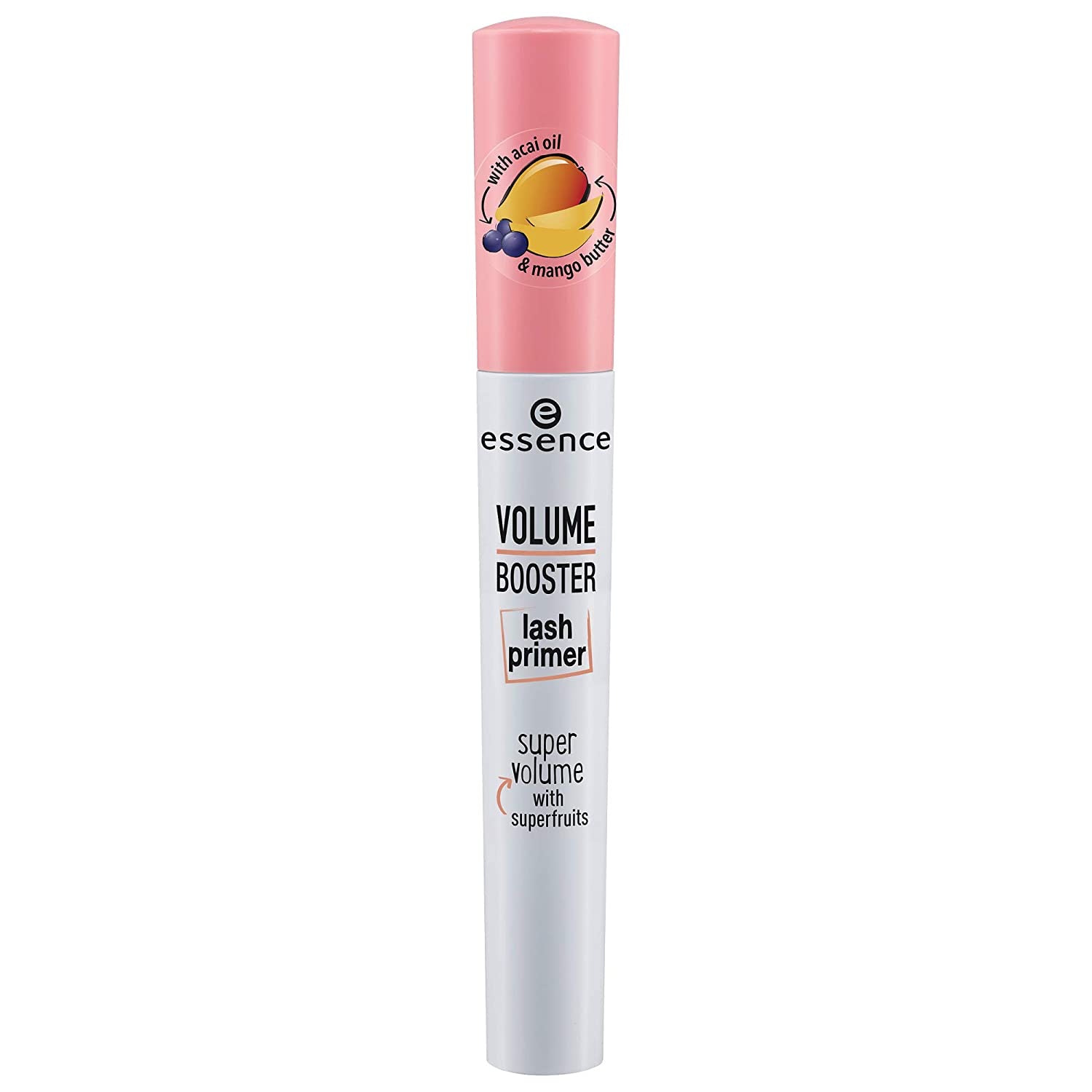 Essence also makes a volume-boosting primer, which isn’t a mascara in and of itself — but it’s worth mentioning due to its 5,000-plus Amazon reviews and cult-favorite status. This formula goes on white to create a base that mascara can cling to, boosts your lashes with buildable volume, and is infused with botanical ingredients to nourish and condition your lash line. And one reviewer raved that it gives "amazing volume" when used with essence’s Lash Princess products.

One reviewer wrote: "This is my first mascara primer but I must say I’m very impressed. It goes on very well and smooth and not only creates volume and length but also keeps the curl in my lashes all day long. Good product for a good price!"