HIS infamous booze binges and blind rages are almost as dramatic as his Oscar-winning movies.

So when it comes to romance, it’s no surprise Russell Crowe has had a turbulent history. 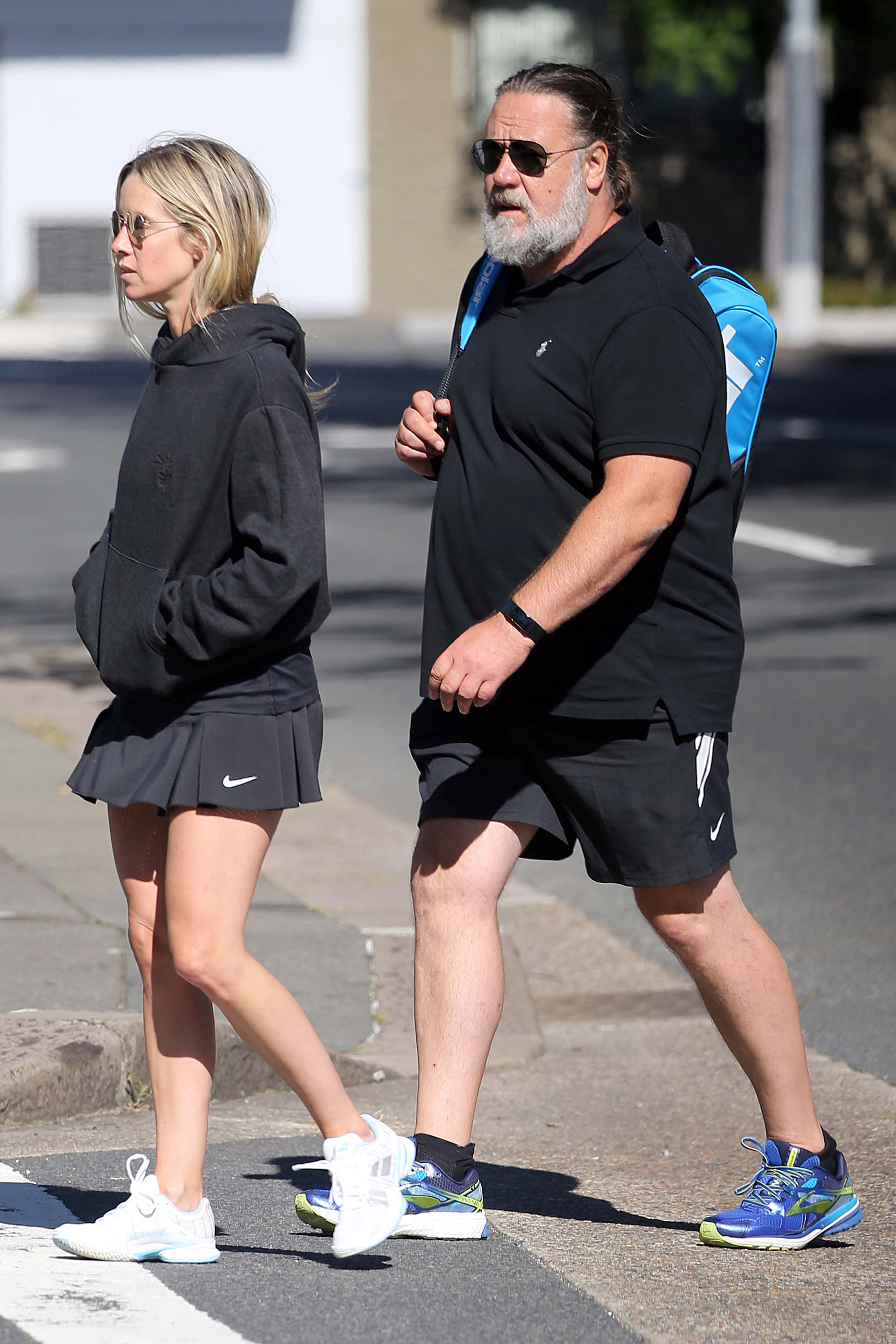 This week, the 56-year-old star was pictured kissing new love Britney Theriot – 26 years his junior – during a tennis match in Sydney.

It’s the first time he’s gone public with a relationship since his painful 2012 split from wife Danielle Spencer – after a stormy marriage which included an infamous incident when he ripped a hotel phone off a wall and threw it at an employee.

But the New Zealand-born star – who has two sons, Charles, 16, and Tennyson, 13 with Danielle – has been linked to numerous women before, during and after their relationship, including Courtney Love, Dita Von Teese and Meg Ryan.

Here we look at the chequered love life of the Gladiator star. 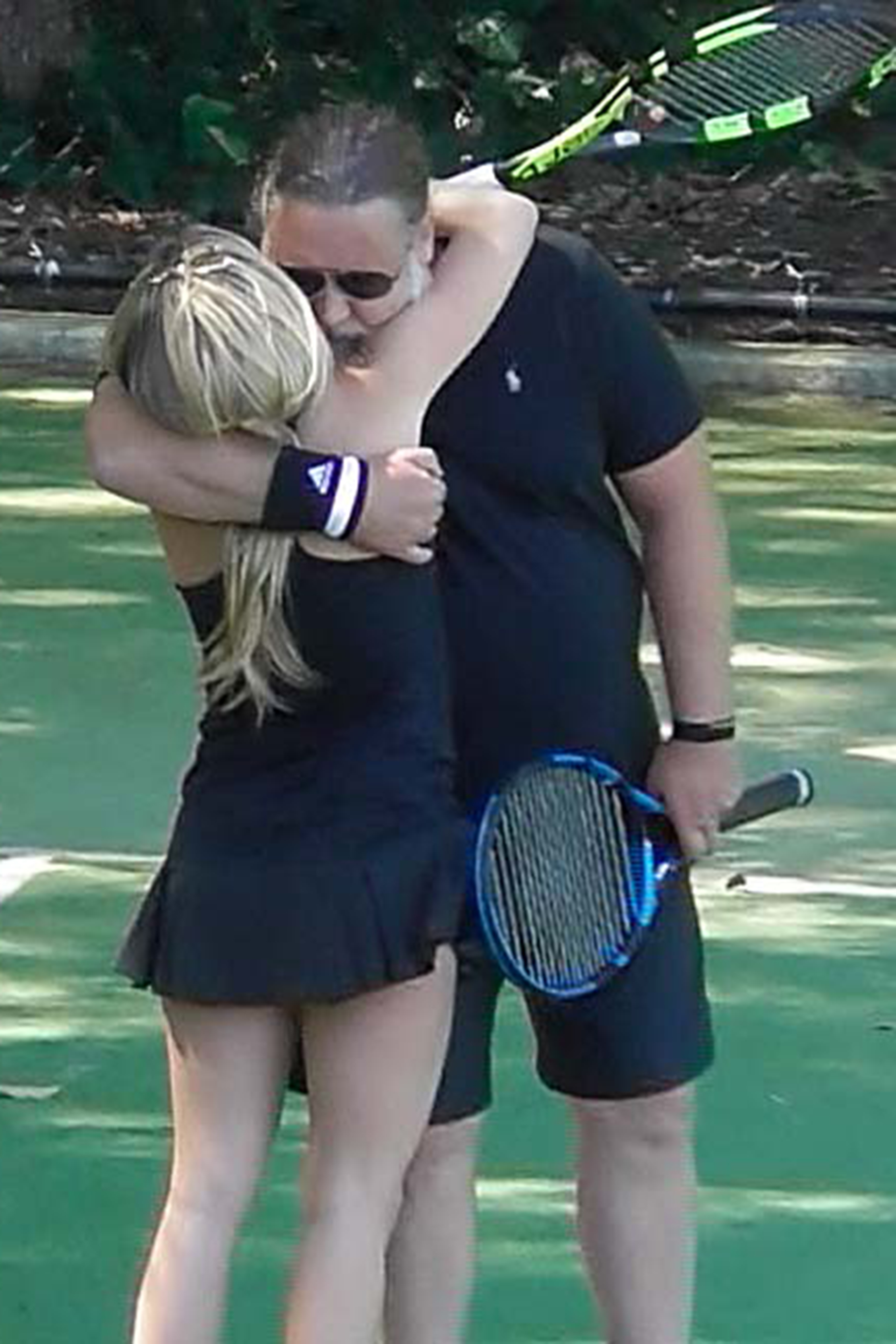 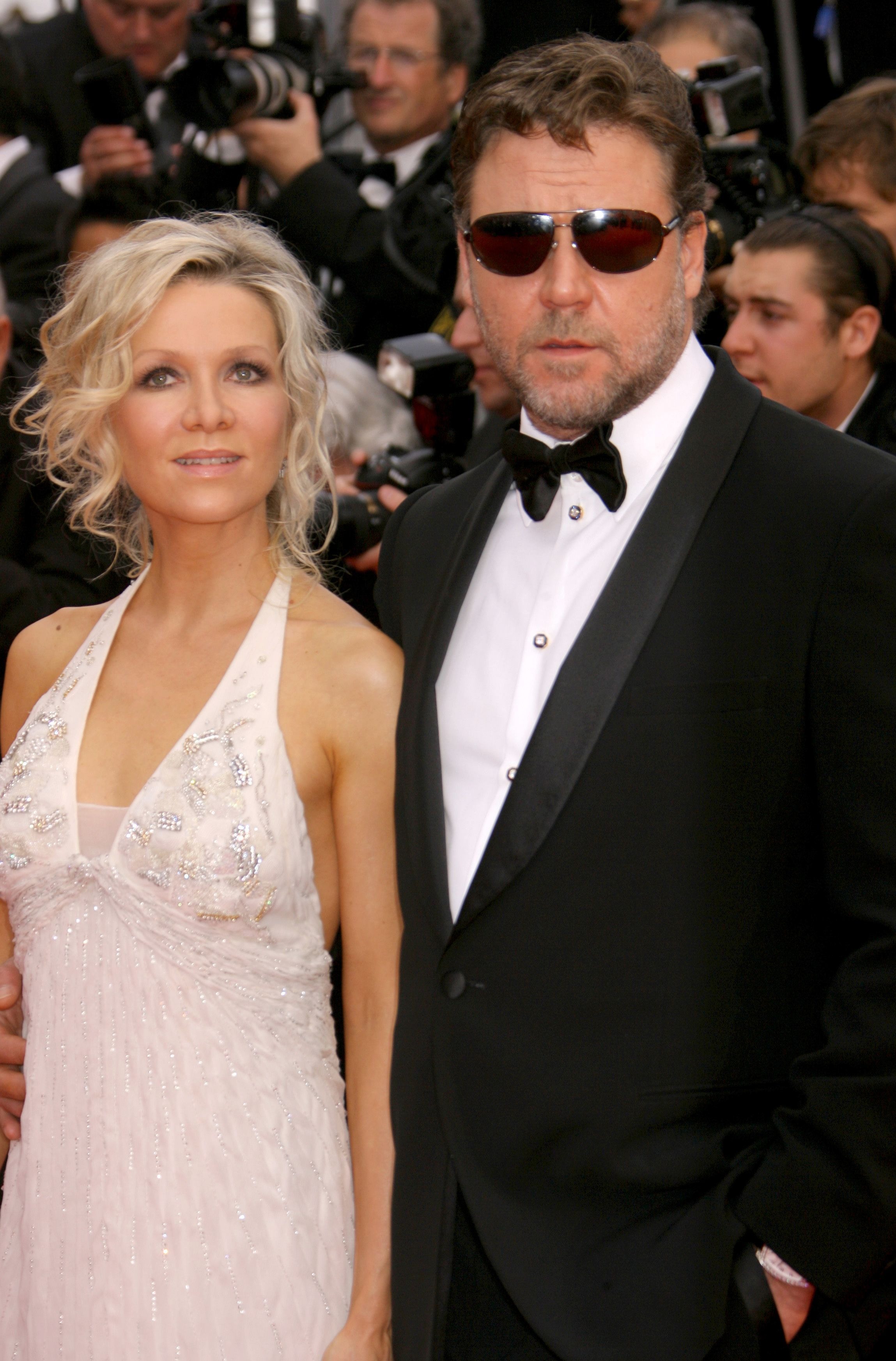 Young Russ too 'ambitious' for love

Although they didn’t marry until 14 years later, Russell met singer Danielle in 1989 when she was cast as his girlfriend in the Australian movie The Crossing. He was 25 and she was 19.

They began dating a year later but the relationship was described as “on-off” as former Neighbours star Russell climbed the Hollywood career ladder.

“We came out of that relationship after a few years with no animosity – it was just circumstance,” she told the Daily Mail.

“Russell was very ambitious and very set on moving to Hollywood, but I was younger and working on music as well as acting in Sydney, so I wasn’t ready to take the plunge.

“We were both too young to settle but we always stayed in touch – and a strong friendship is a great basis for a relationship.’ 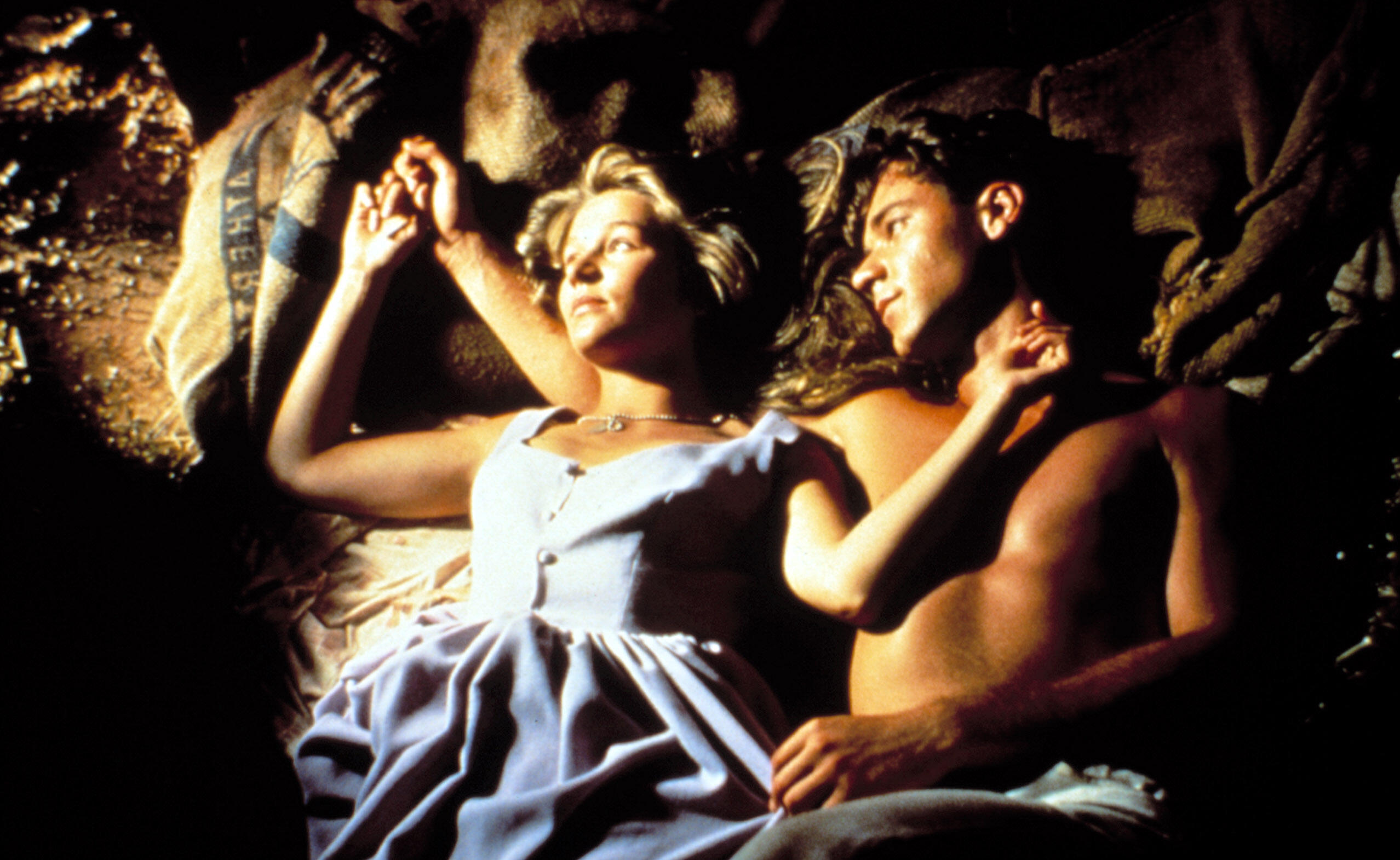 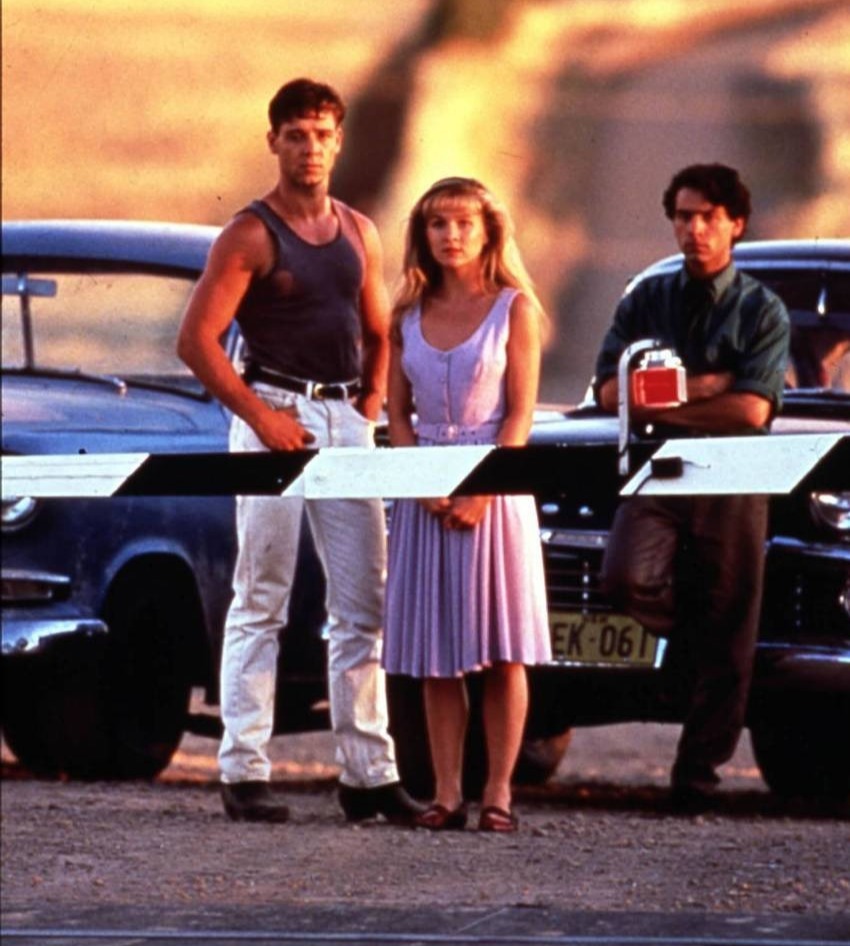 When bad boy Russell met Meg Ryan – the squeaky clean star of Sleepless in Seattle – on the set of the 2000 movie Proof of Life, sparks instantly flew.

The co-stars embarked on a passionate affair that spelled the end of Meg’s nine-year marriage to Dennis Quaid and was labelled “destructive” by the film’s director, Taylor Hackford.

The story of the secret affair broke while the couple publicised the film, and Meg went from girl-next-door to “scarlet woman”, as she told the Guardian in 2003. 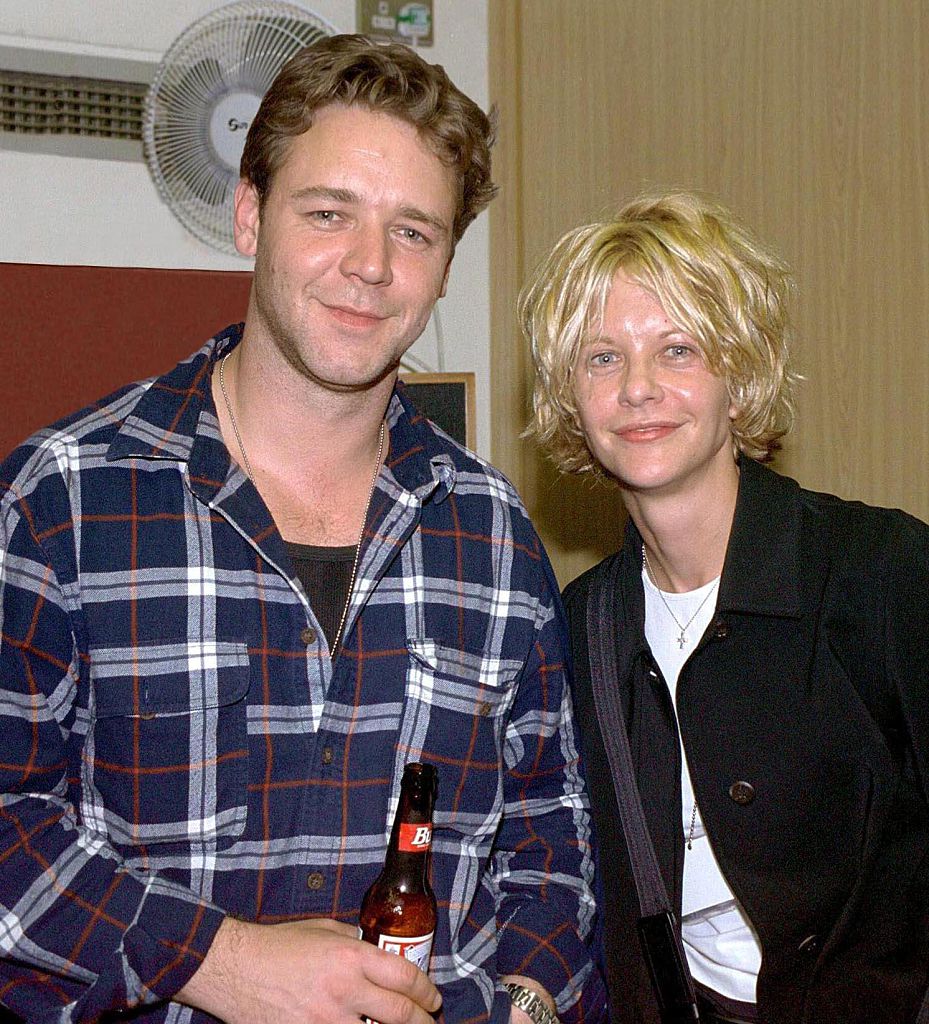 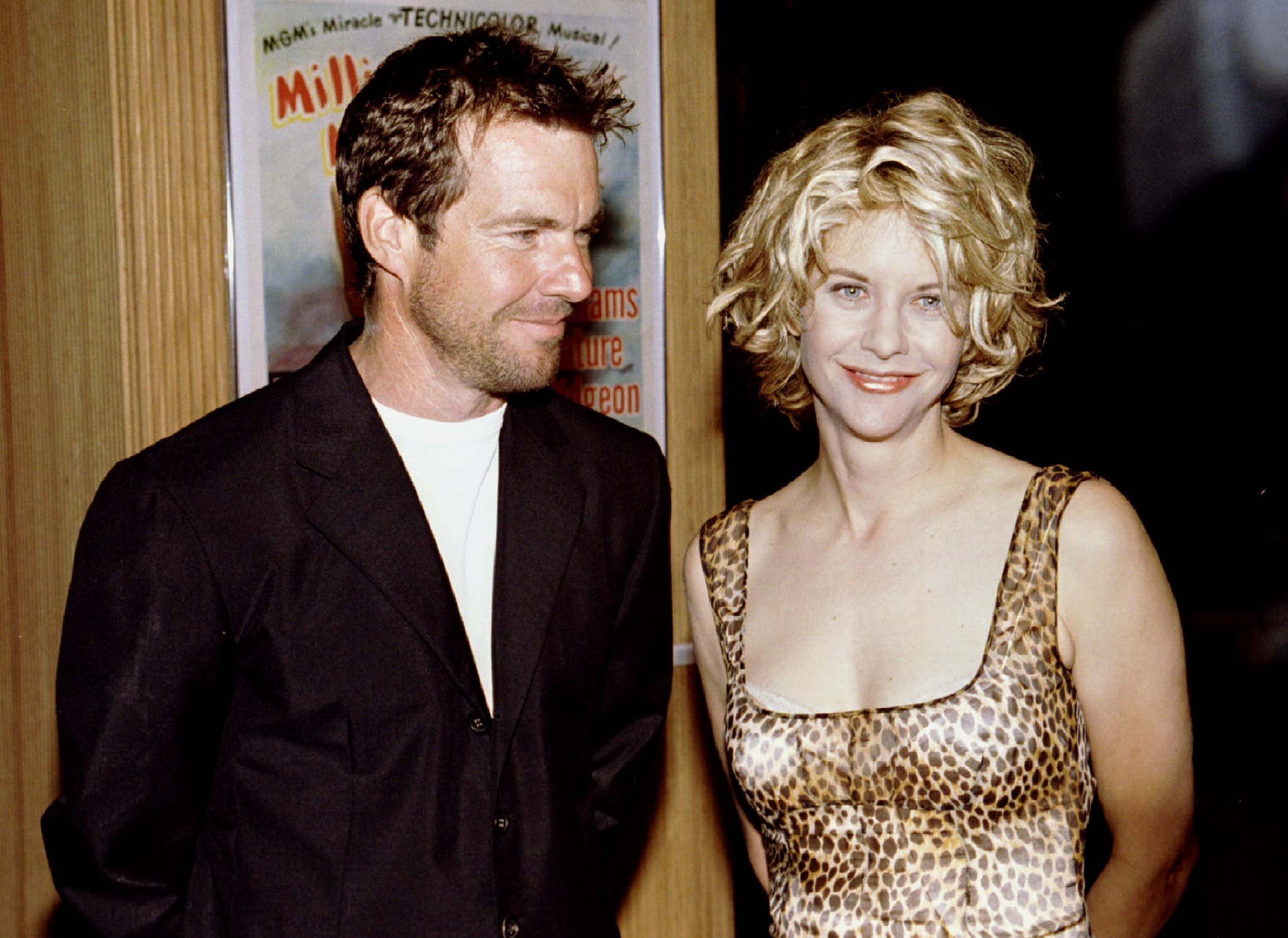 “It was in One Aldwych Hotel. I walked through the lobby and the place stopped. People stopped talking and stared at me," she said.

"Then I got to the elevator and instead of falling apart and going, ‘Ooh,’ I just started laughing.

“This thing that people are so afraid of all the time — public censure or disapproval — has no power if you know yourself.”

Russell was less calm, walking out of press conferences when the romance was mentioned, and he was less than pleased when Hackford blamed the film’s box office failure on the tryst.

He told reporters: "It had an indelible and very destructive effect on the release of the film in the US, because the real life story overpowered the film.”

When this message was relayed to Russell he replied: “He's a f***ing idiot. No seriously, what a kn**."

The pair split within a year with Russell telling Melbourne’s Herald Sun: “Meg is a beautiful and courageous woman. I grieve the loss of her companionship, but I haven’t lost her friendship.”

Meg – who shares son Jack, 28, with Dennis Quaid – later denied Russell was the reason for her marriage split.

“I think he took a big hit,” she told InStyle. “But Russell didn’t break up the marriage. He was definitely there at the end, but it wasn’t his fault.

“I was a mess. I hurt him, too, at the end. I couldn’t be in another long relationship, it wasn’t the time for that. So I got out.” 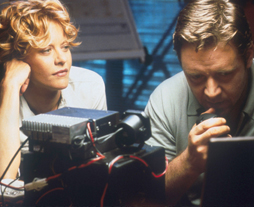 Over the next two years, the star was linked to numerous A-listers, including Sharon Stone, Jodie Foster and Nicole Kidman.

The Moulin Rouge star, who first met Russell in their native Australia, denied any romance on Jay Leno’s chat show, saying: "I've never kissed him, no. We have known each other since I was about 19 or 20, and we are very good friends. "

However, Russell turned the denial on its head when he joked, in another interview: "I think she is pulling your leg. I have actually been in a number of adult situations with Nicole. It gets lonely on the road. " 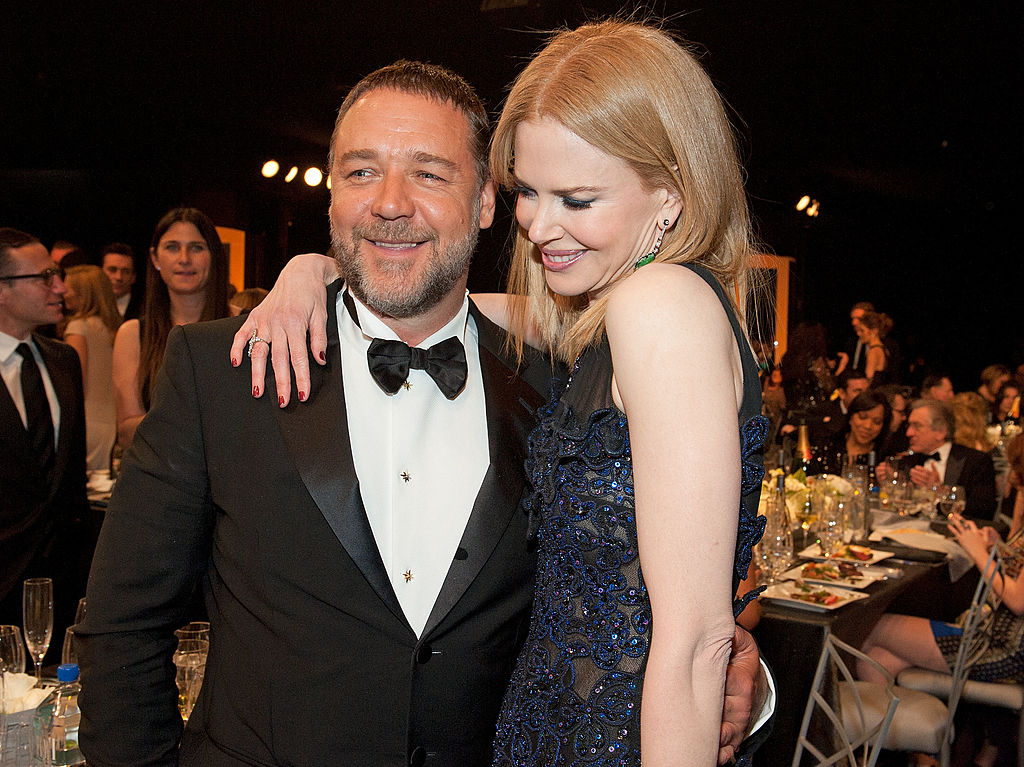 Russell’s close friendship to Hole singer Courtney Love led to rumours of a relationship in 2001 but the pair fell out, in spectacular fashion, at an Oscars party the following year.

After partying until 3am at a Beverly Hills bash, the actor left without her.
To add insult to injury, he sped off in a limo with his then ex Danielle.

Furious Courtney, 35, banged on the windows of the car and, according to onlookers, let loose a foul-mouthed rant at the pair, yelling: “Why are you so f***ing paranoid?”

Russell later claimed there had been no romance but said he dropped her out of his life because she insulted Danielle.

He told USA Weekly: “I always had a lot of time for her until earlier this year, when she kind of verbally attacked a really good friend of mine.”

He also that she had “got pregnant and had a miscarriage or something, so it was printed that it must be my child, right? She didn’t come out and say it wasn’t possible since there was no sexual relationship.

“I don’t believe it’s the gentleman’s prerogative to ring up the media to deny a sexual liaison. It’s ungallant.”

In 2002 he was linked to his Beautiful Mind co-star Jennifer Connelly, although this has never been confirmed.

She went on to marry Paul Bettany, who also starred in the film. 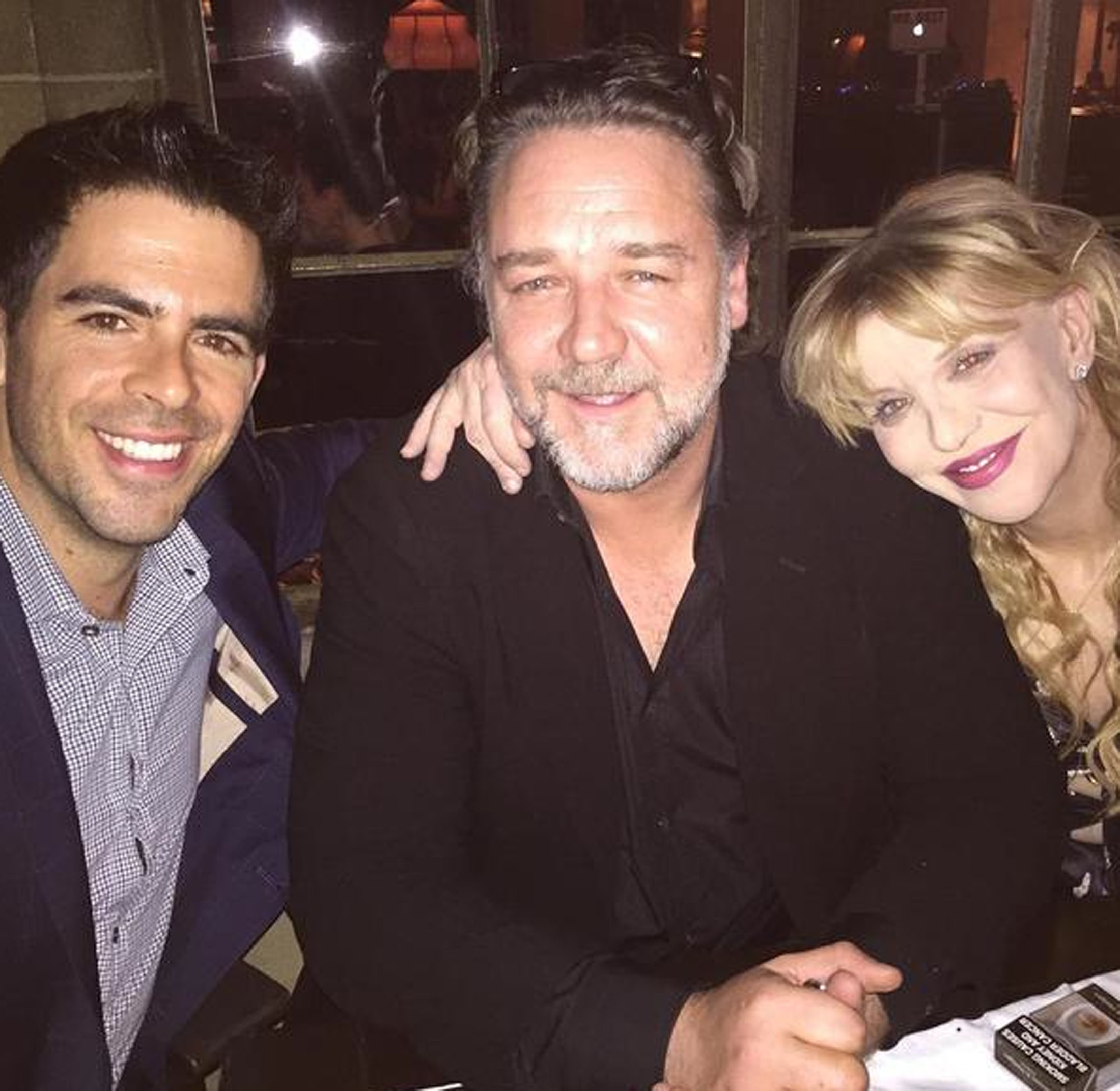 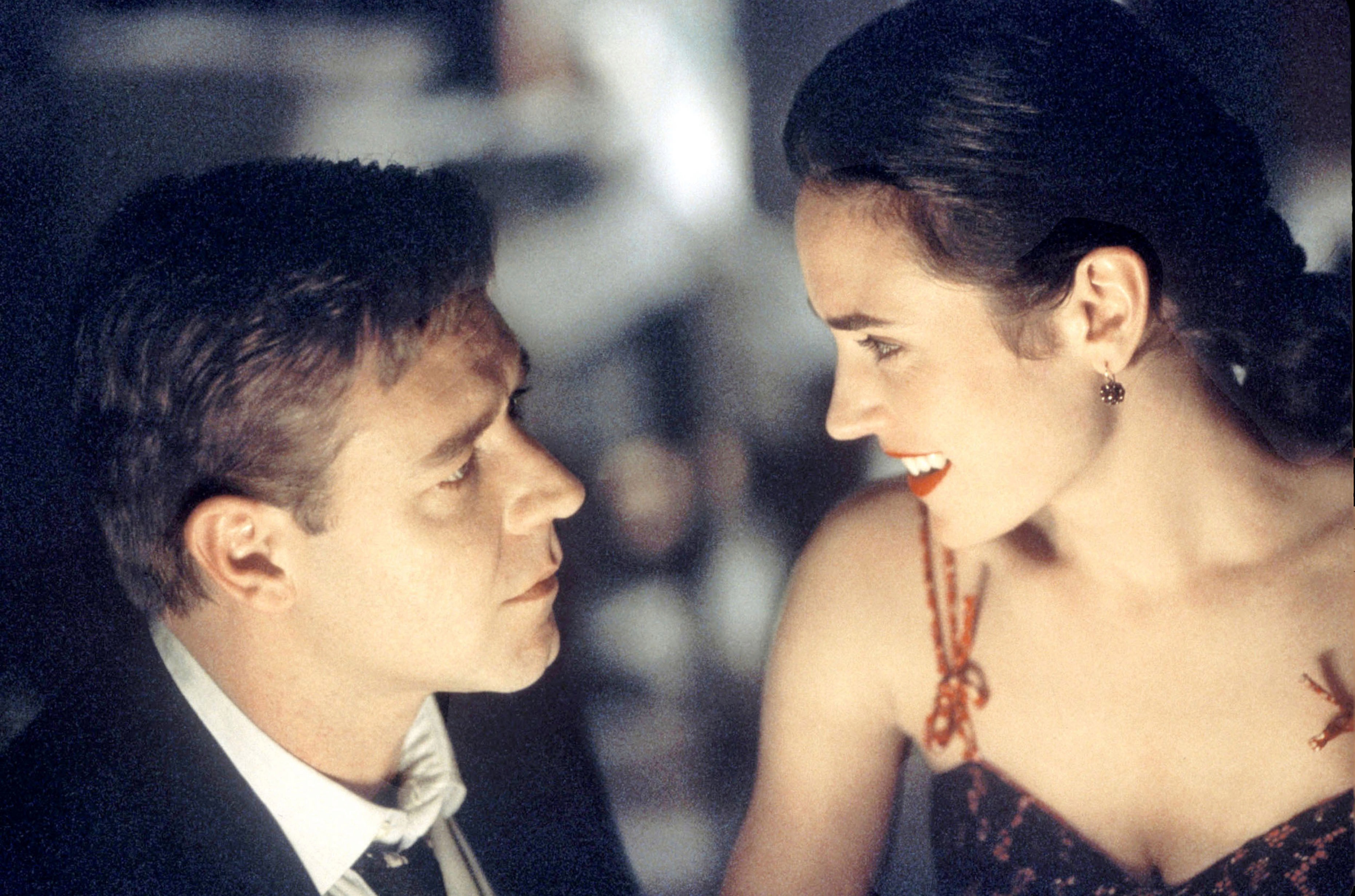 Despite rumours swirling around all his leading ladies, Russell had already rekindled his romance with Danielle by the start of 2002.

“I was coming out of a relationship, so it all kind of dovetailed,” Danielle later recalled. “I do believe that things happen when they are meant to, and we were both ready to marry.”

Despite the new romance, there were frequent claims of lewd behaviour and violent brawls plaguing the star at the time.

On one occasion that year, the actor appeared drunk at London's Zuma restaurant and it's claimed he approached fellow diner Georgie Calder and tried to kiss her, then licked her face and invited her to his hotel room.

He also got into a bar brawl with millionaire Eric Watson who claimed the star made a racist taunt, refused to apologise, then punched him twice in the face before being wrestled to the floor. 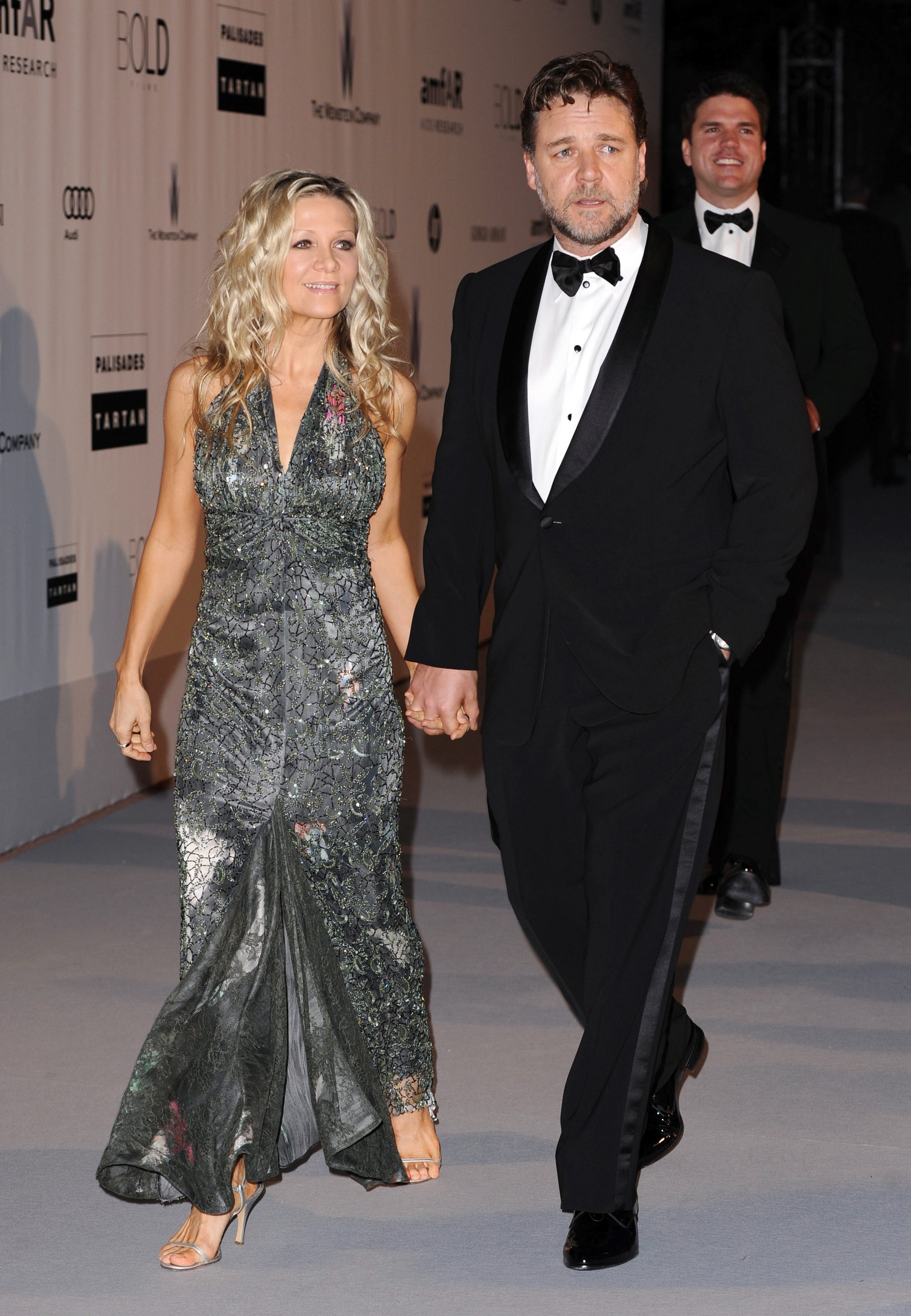 The woman who tamed the Gladiator

Russell proposed to Danielle at his favourite Sydney restaurant, Darcy’s, and tied the knot on his 39th birthday, April 7 2003, in a specially built chapel at his Australian farm.

Russell’s past romances didn’t faze his new wife, who said: “It doesn’t really bother me. While he was with that high-profile person, I was in a relationship as well.

"We remained friends; he would ring me up and say, 'Hey, how are you doing?' So we always knew where we were at.”

The hellraising star – known for his drunken nights out and fiery temper – appeared to be tamed by the petite blonde singer.

“My wife is a very contained person, very passionate and creative, with a quietness and grace that I really appreciate,” he told You in 2005.

When she fell pregnant with their first child, Charles, she persuaded him to stop drinking in sympathy, telling him: “I’ve got to do it, why shouldn’t you?”’

But seven months into the marriage, as a heavily pregnant Danielle sat at home in Australia, Russell was snapped in a German strip club.

His agent said the star and his pals who were “letting off steam” after the premiere of his film Master And Commander in 2003, and that Danielle would have been with him if she had been able to fly.

Danielle put her own musical career on hold to raise the boys, as movie work kept him away from the family home for months.

But despite his new-found love of country walks and family time, she claimed he didn’t need taming.

“And I know he’s someone I can count on. I don’t think I’ve tamed him, I just think there’s a natural progression when you become a parent and are relaxed and happier.”

She added that the pressures of celebrity had made him quick-tempered and “defensive” and said he’d “moved into a calmer environment that works better for him”.

But there were still volatile times. On one occasion, in 2005, Russell ripped a telephone off a wall and threw it at a hotel concierge in New York when he couldn’t get through to his wife.

He was arrested and fined £120 for the incident but is rumoured to have paid the concierge around £750,000 to avoid a lawsuit.

However, in that same year, patrons of a bar in Toronto — where he was filming Cinderella Man — claimed the star was drinking heavily and had been asking women to give him a kiss and complaining they were ‘b*****s’ when they refused. 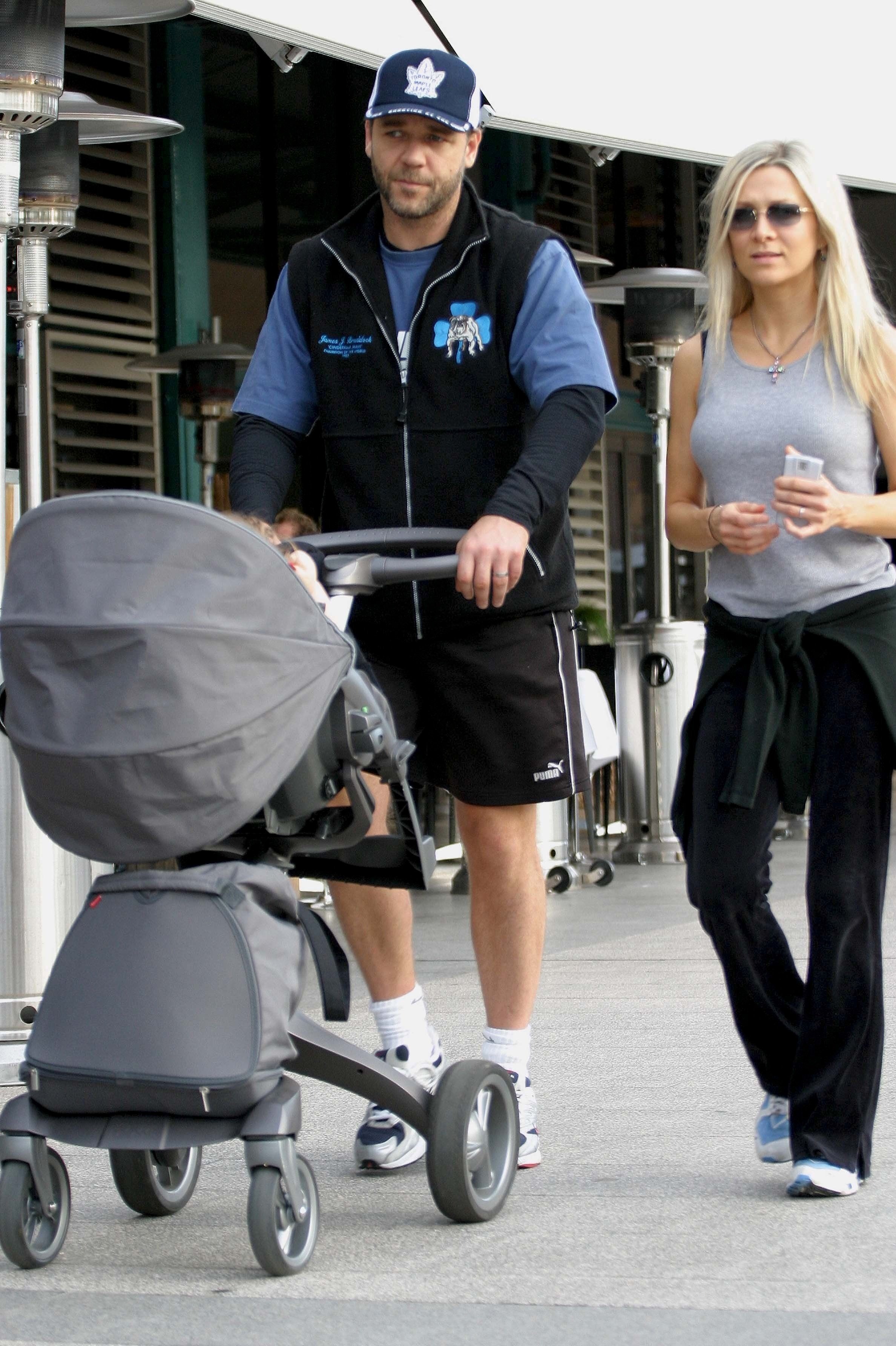 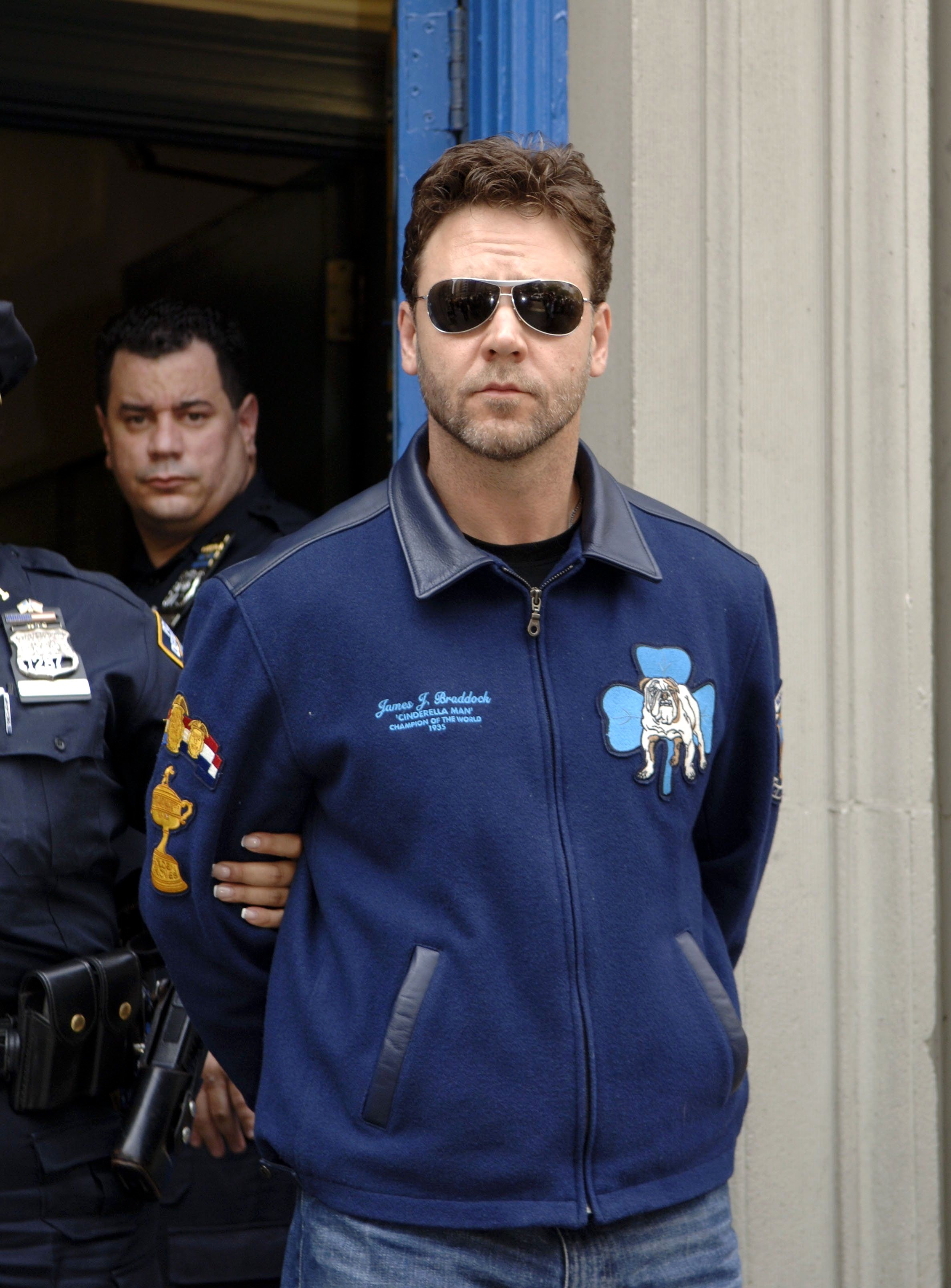 Cracks in the marriage began to appear in 2011, when guests at a casino reopening the couple attended in Sydney reported they were “frosty” towards each other,

The same year, Danielle settled into a new £6 million house in the eastern Sydney suburb of Rose Bay and neighbours claimed she and the children moved in alone.

For the rare times he was in the country, he stayed alone in their penthouse apartment in nearby Woolloomooloo, while still attending the boys’ football matches and spending time with them.

The actor marked the occasion with an auction of bizarre objects he’d collected over the years, including a dinosaur skull bought from Leonardo DiCaprio for £27,000, a jock strap worn in Cinderella Man and a chariot from Gladiator.

Despite an estimated wealth of £50million at the time, Danielle got a settlement of just £10million and the Rose Bay house, thanks to a pre-nup agreement.

But the pair remained friends, even holidaying together for the sake of the boys. 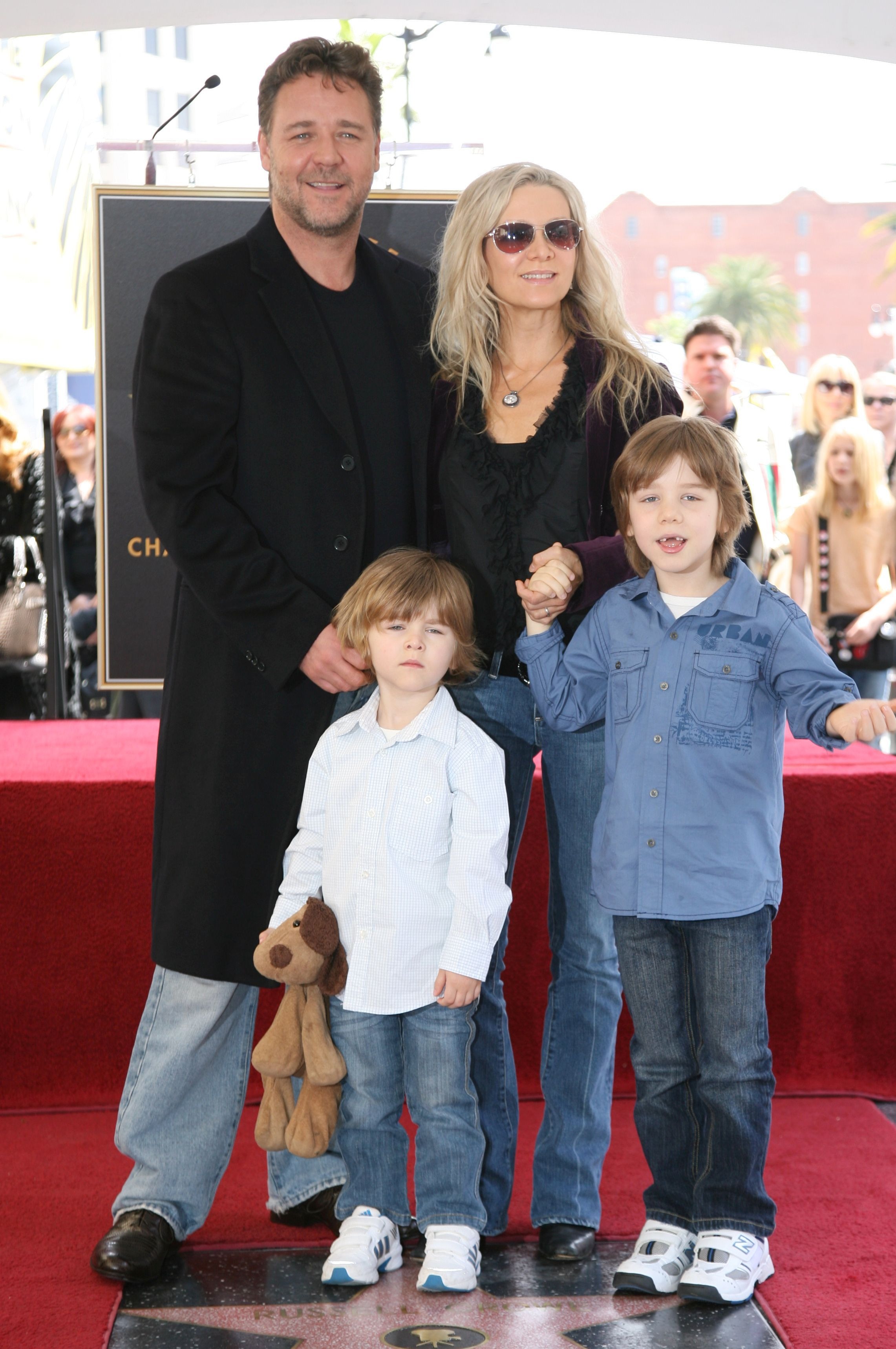 Since the split, rumours of the actor’s love life have swirled around him once again.

An Australian magazine claimed that Brit actor Samantha Barks, then 22, developed a ‘special relationship’ with the Gladiator actor on the set of Les Miserables.

A source told New Idea magazine that at the Oscars after-party, in 2013: “She was continually touching his sleeve, giggling and sitting in awe of his every word, and he was lapping up every moment.”

But Russell took to Twitter to joke about the rumours writing: "@SamanthaBarks apparently we are an item according to Aussie magazines.”

She replied: “Rumours are hilarious and not true!” 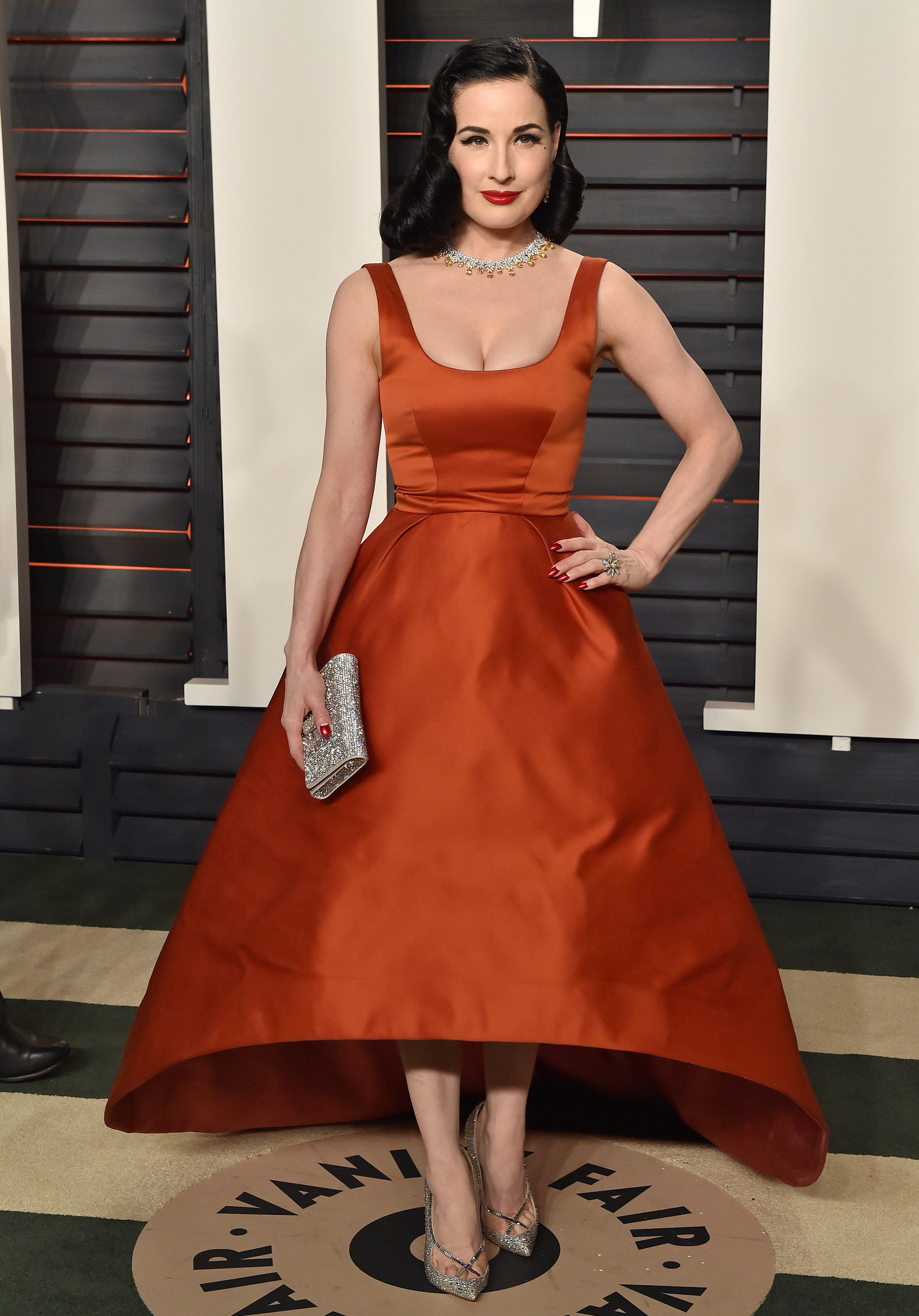 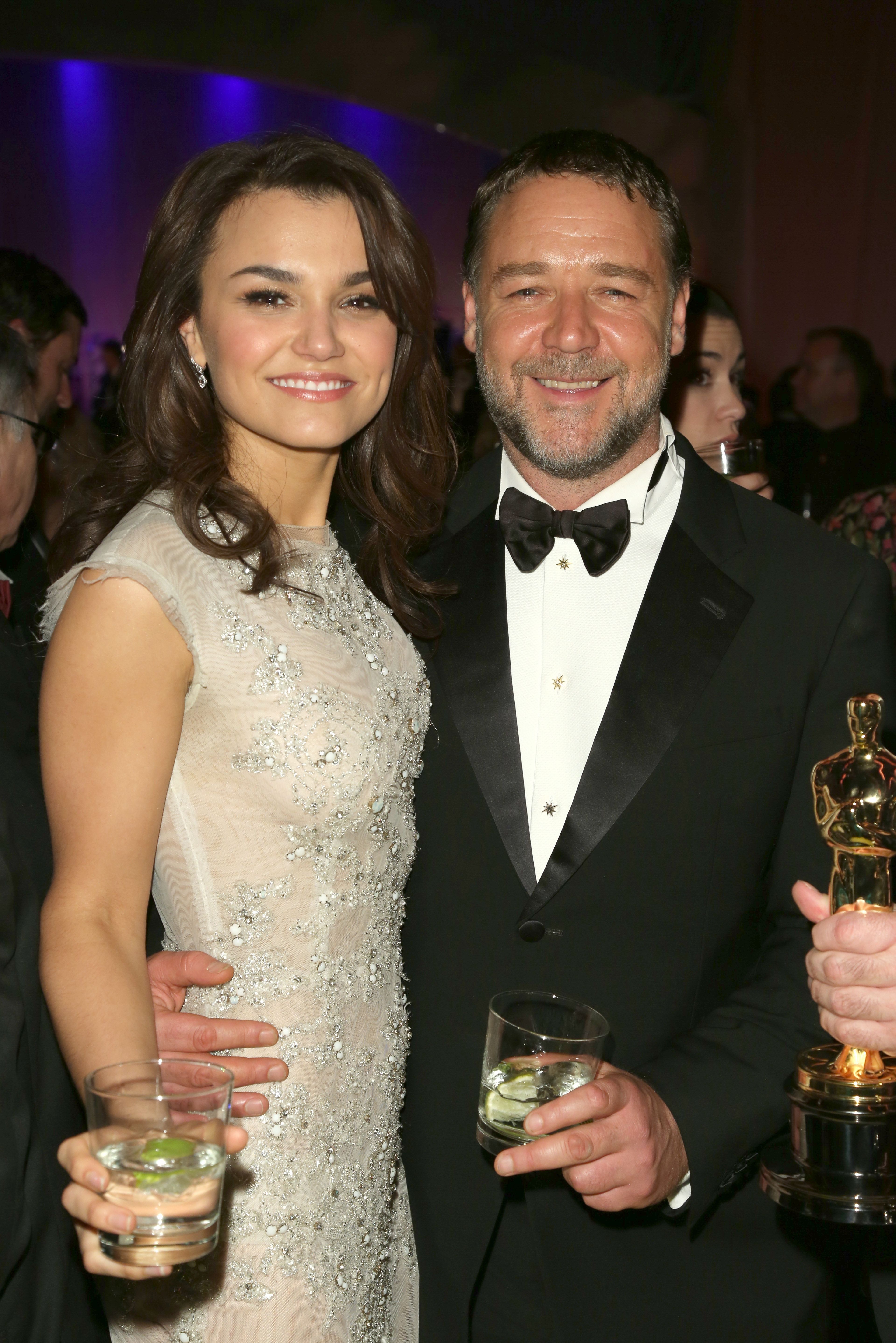 More recent rumours that he has finally found love with Britney have finally been confirmed.

The couple couldn’t keep their hands off each other as they piled on the PDA at the Sydney tennis session.

Though their blossoming romance appears to be new, the pair acted alongside each other in the 2013 film, Broken City. 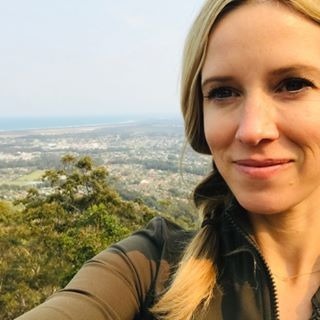 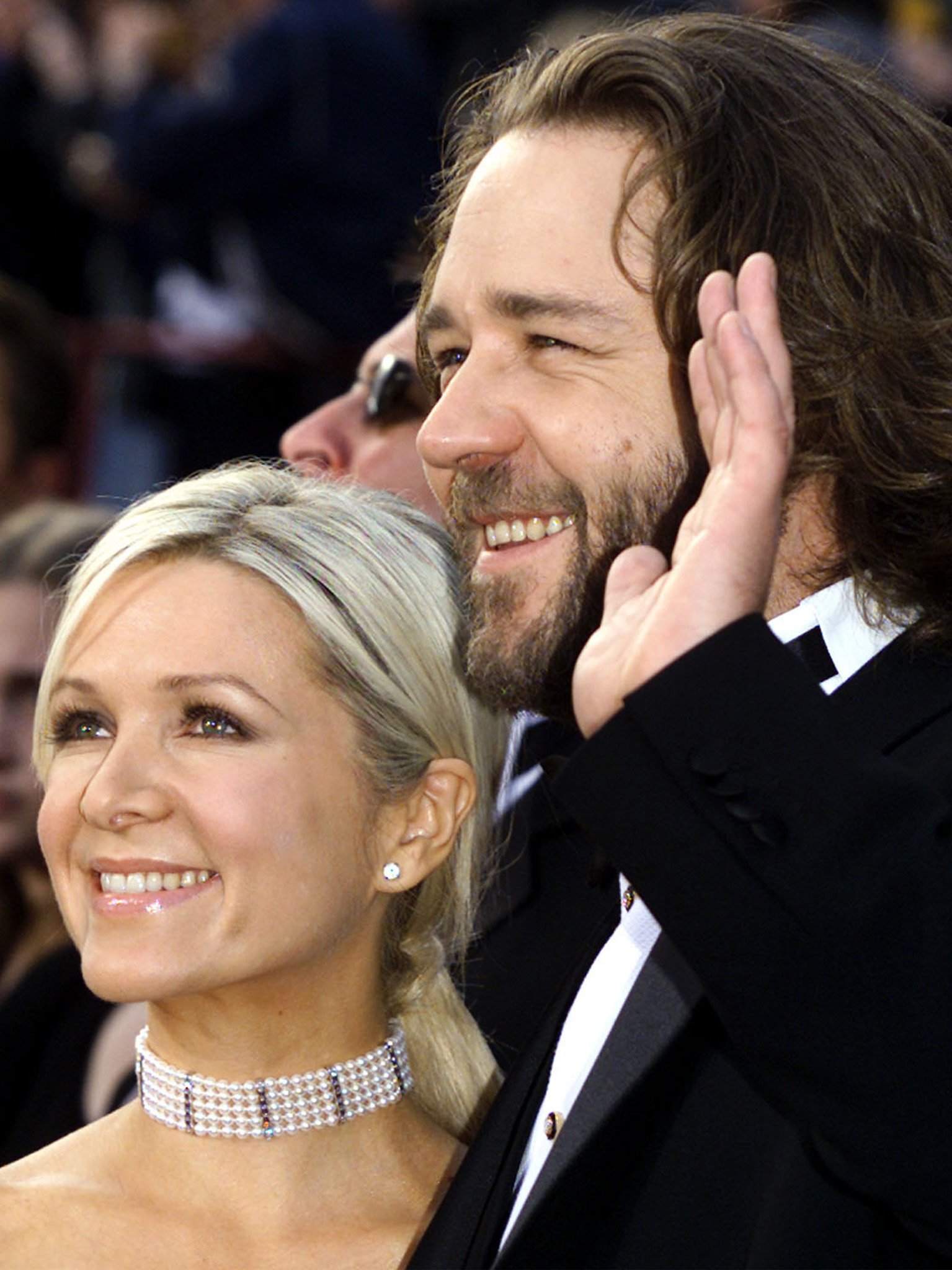 At 30, she is 26 years his junior but bears a striking resemblance to ex Danielle.

Having given up the acting game for a more steady career in real estate, she clearly has her feet firmly on the ground.

After a long line of showbiz relationships, she might be just the calming influence he needs.