Even the most loving couples can struggle to put together a simple Ikea bookshelf without arguments and acrimony. But Amy Lai Wong and Michael Jastrzebski, who were married Nov. 29 at their home in Newark, Calif., bonded over much more complicated projects while working together as the only two mechanical engineers at a technology start-up company in Silicon Valley.

“It’s really fun to build stuff together,” Ms. Wong said. “I guess that’s the foundation of a lot of what brought us together.”

During marathon sessions of problem solving and tinkering in the pressure cooker environment of a fledgling tech enterprise, they quickly came to realize they had more in common than a shared vocation. Both are East Coast transplants to California. Mr. Jastrzebski, 32, was born in Poland and raised in New Hampshire and Ms. Wong, 37, grew up in Brooklyn. Both learned English as schoolchildren in the United States.

It was the latter revelation that proved particularly fateful.

“I kind of homed in on that,” said Ms. Wong, who graduated from M.I.T. and received a master’s degree in mechanical engineering from Stanford. “That experience, I think, is pretty unique and being able to overcome that and learn that while you’re going to school, for me that was very impactful.”

To mitigate the stress of work, they began to teach other words and phrases from their first languages that pertained to their day-to-day life in the lab. Mr. Jastrzebski shared “bez młota to nie robota,” which he roughly translated to “you can’t get anything done without a hammer,” and Ms. Wong supplied “ga yau,” a Cantonese expression of encouragement.

Once they began dating, in early 2013, Ms. Wong and Mr. Jastrzebski, who are now both senior mechanical product design engineers at Google, often shifted back to their common language, engineering, to develop their relationship. Mr. Jastrzebski, who has no musical background or training, built Ms. Wong a music box that required him to transpose a piece of one of her favorite songs and punch the notes into the box’s mechanism by hand.

“I remember some of my friends at the time saying, ‘Dude, you just met her and you’re giving her this. What are you going to give her later?’” he said. 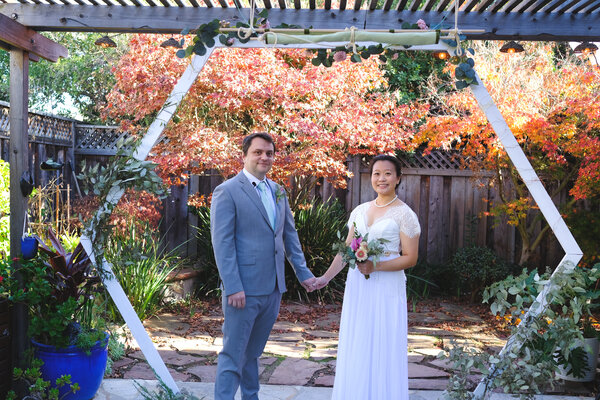 For their one-month anniversary, Ms. Wong hand-sewed a Chinese dumpling and a Polish pierogi made from felt and stuffing to give to him.

For his proposal years later, Mr. Jastrzebski, who graduated from Northeastern, constructed another, much more elaborate music box. “I’ve gotten better at making stuff so the level of gifts for Amy has improved in quality,” he said.

To find that music box, Ms. Wong had to consult a device inspired by divination tools the couple had encountered at Buddhist temples in Asia. It was built and modified by Mr. Jastrzebski to point her toward a specific drawer in the chest he made to accompany the device. Inside the drawer was a proposal and directions to where Ms. Wong could find the music box, designed to look like a planter with a flower in it. With the touch of a heart-shape button, it unfurled to reveal an engagement ring.

Their ceremony, broadcast to friends and family via Google Meets, was conducted in person by the bride’s sister, Jennifer Lai Wong, who was ordained by American Marriage Ministries. She also acted as bridesmaid, master of ceremonies and photographer. The couple’s dogs, Pernie (short for Copernicus) and Banana, served as ring bearers.