SPRUCING up your kids' bedroom on a budget is no easy feat – especially when they ask for a dramatic jungle-themed room to escape to.

But Beckie Watts, a mum-of-two from Southend-on-Sea,accepted the challenge and was able to create an amazing space on a budget using bargains from The Range, Amazon & Wilko. 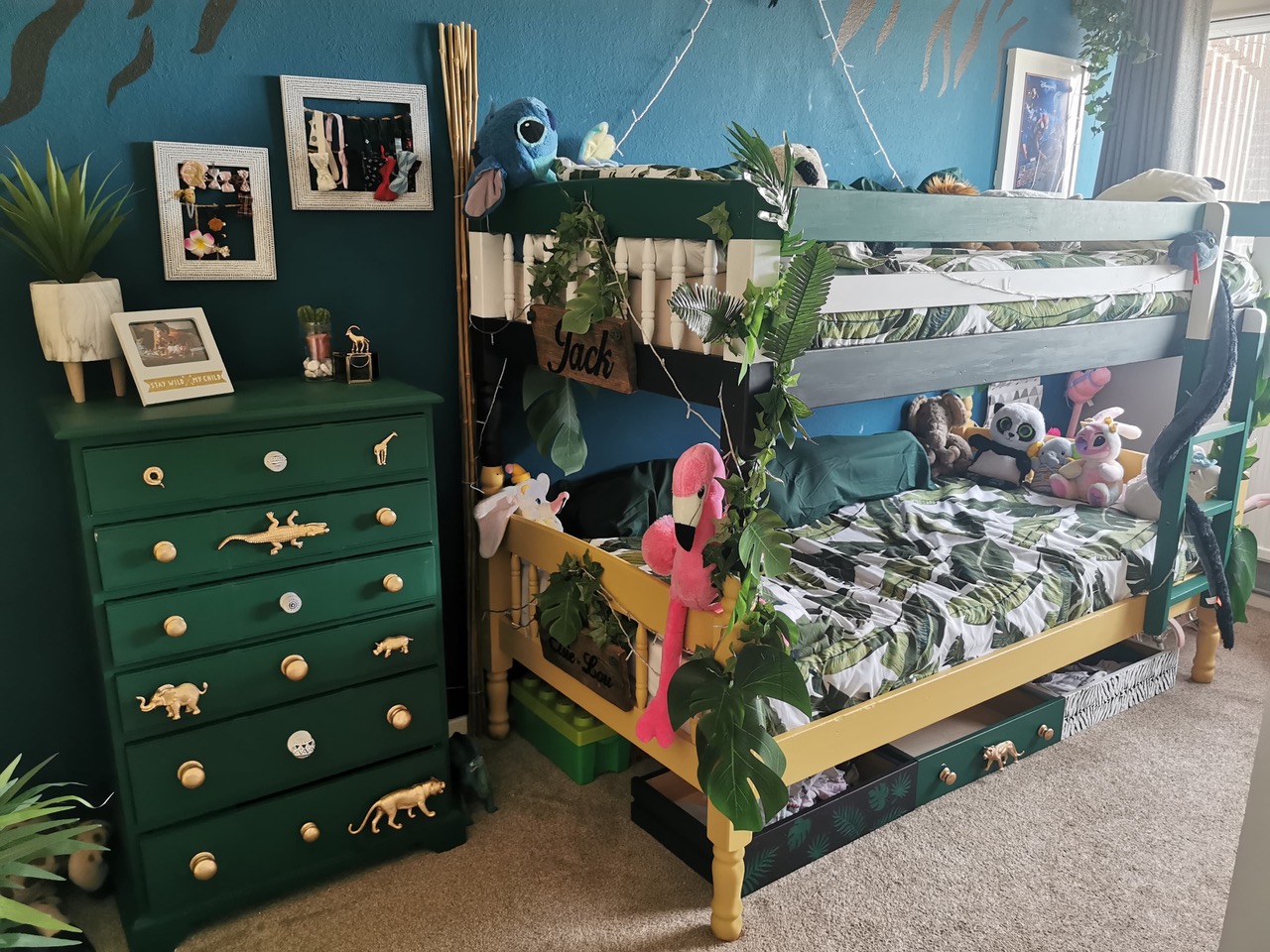 The tired kids' room featured plain white interiors and had mismatched furniture throughout.

But now, the incredible bedroom boasts variants of blue, green and gold with animal-themed prints appearing throughout – all for just £150.

Speaking to money-saving community LatestDeals.co.uk, Beckie explained: "My kids wanted a jungle-themed room so I started with a set of drawers I was given by a customer years and years ago and painted that green with gold handles"

"I used the original handles and then spray painted some of the children's animal toys to turn them into jungle drawers." 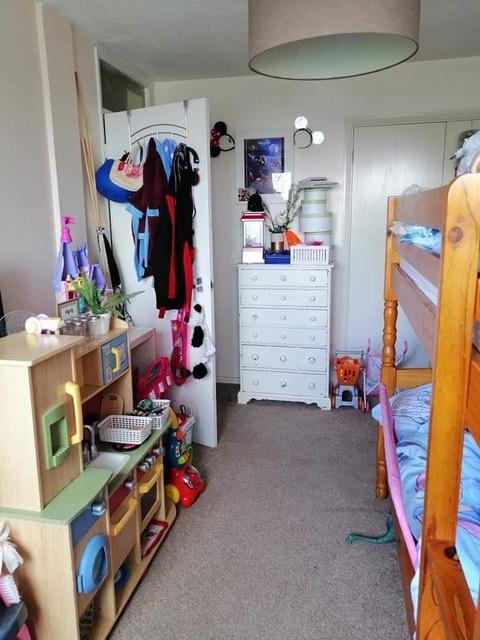 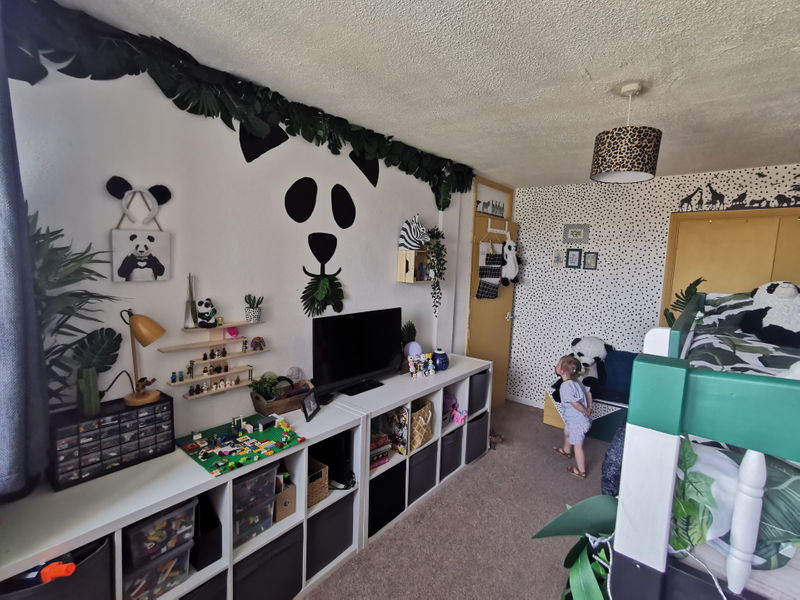 As for the colour inspiration, though, she claims "it all started with Frenchic!"

She said "I had painted my kitchen in their incredible paint and I had some of the green left over called Victory Lane."

The clever mum went on to explain how she picked up a pot of blue paint for the feature wall, which cost just £6.95 from Wilko.

Then she drew and hand painted the incredible tiger stripes on the wall after spotting a pattern she loved online. 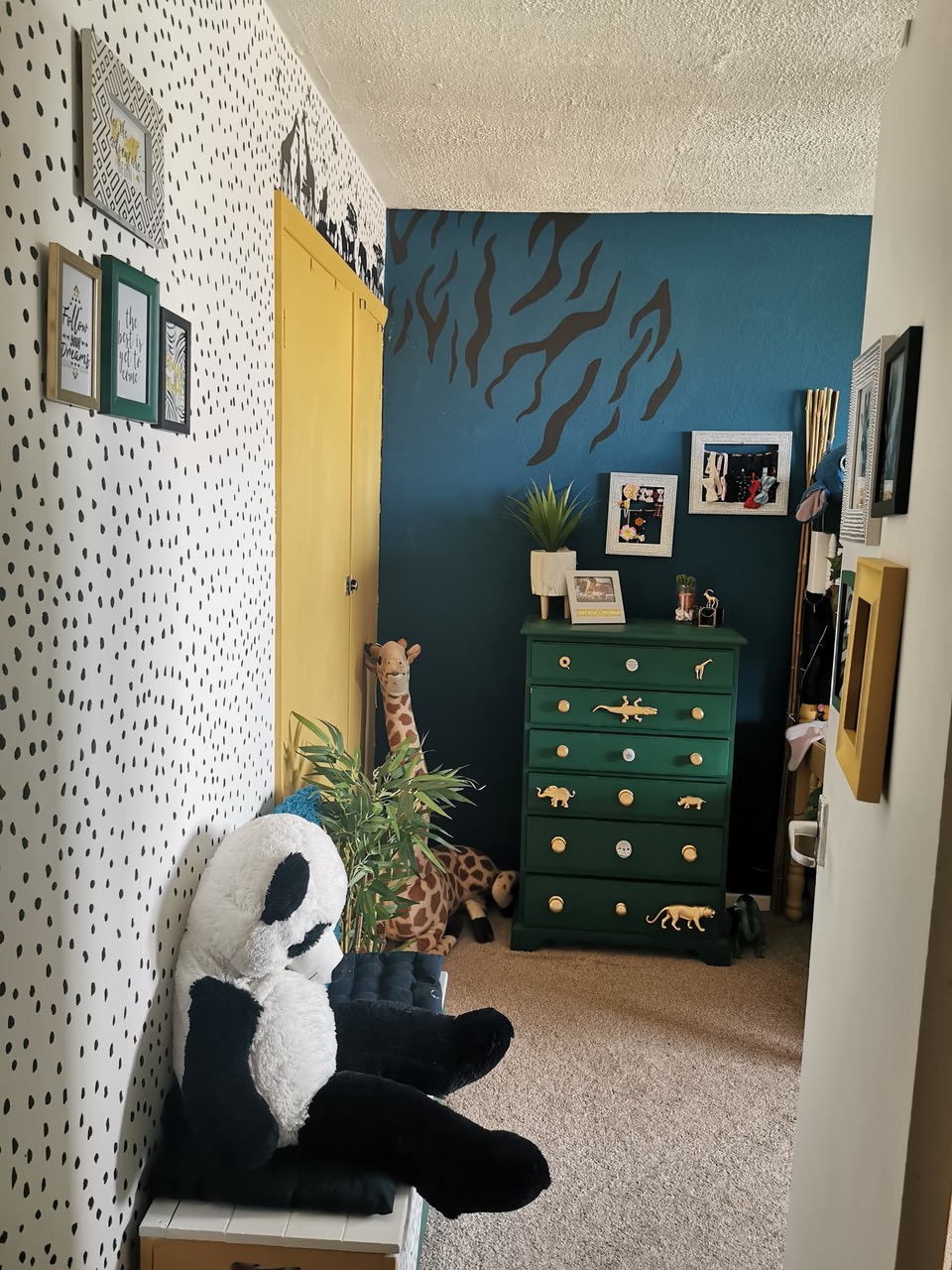 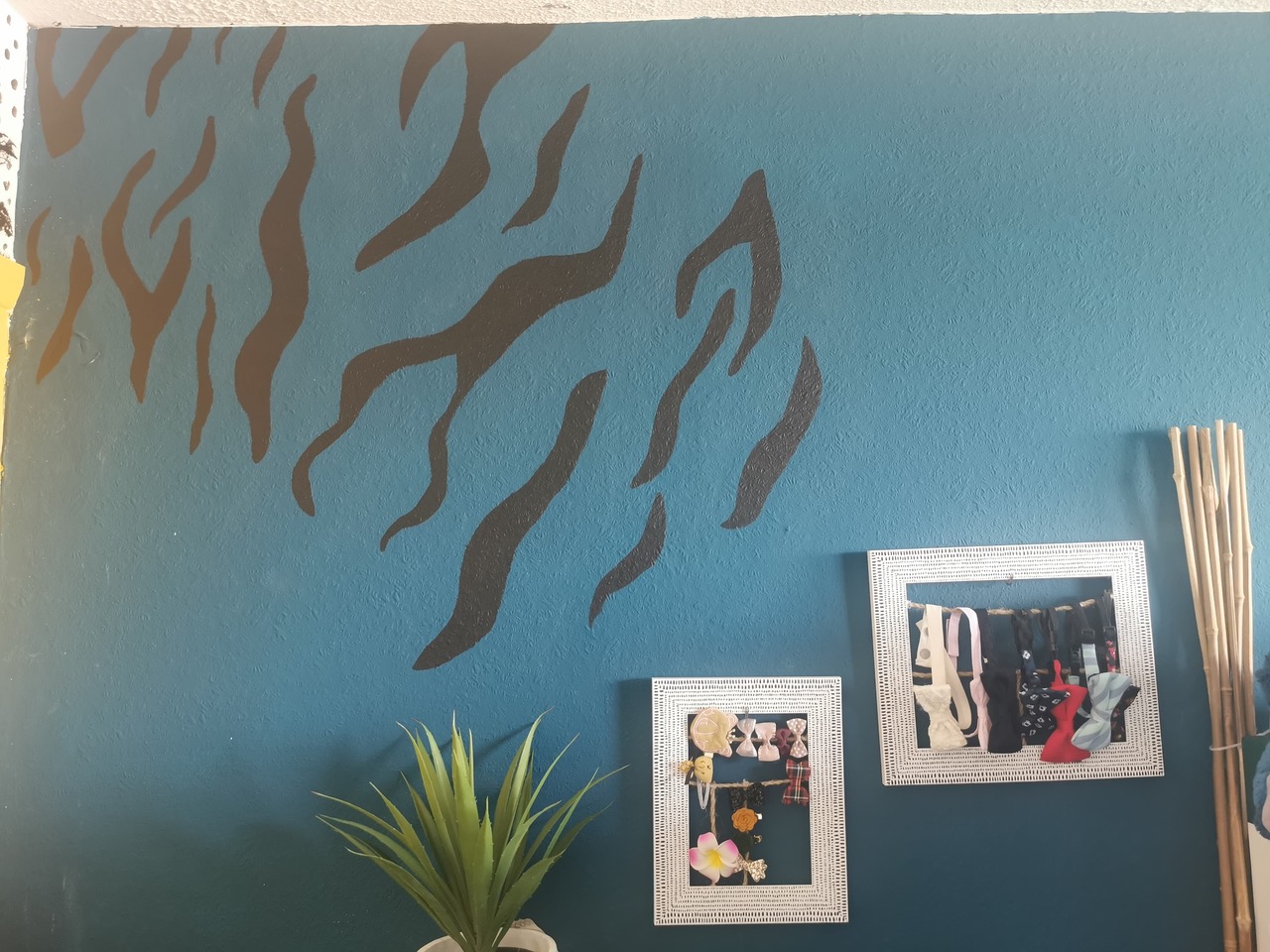 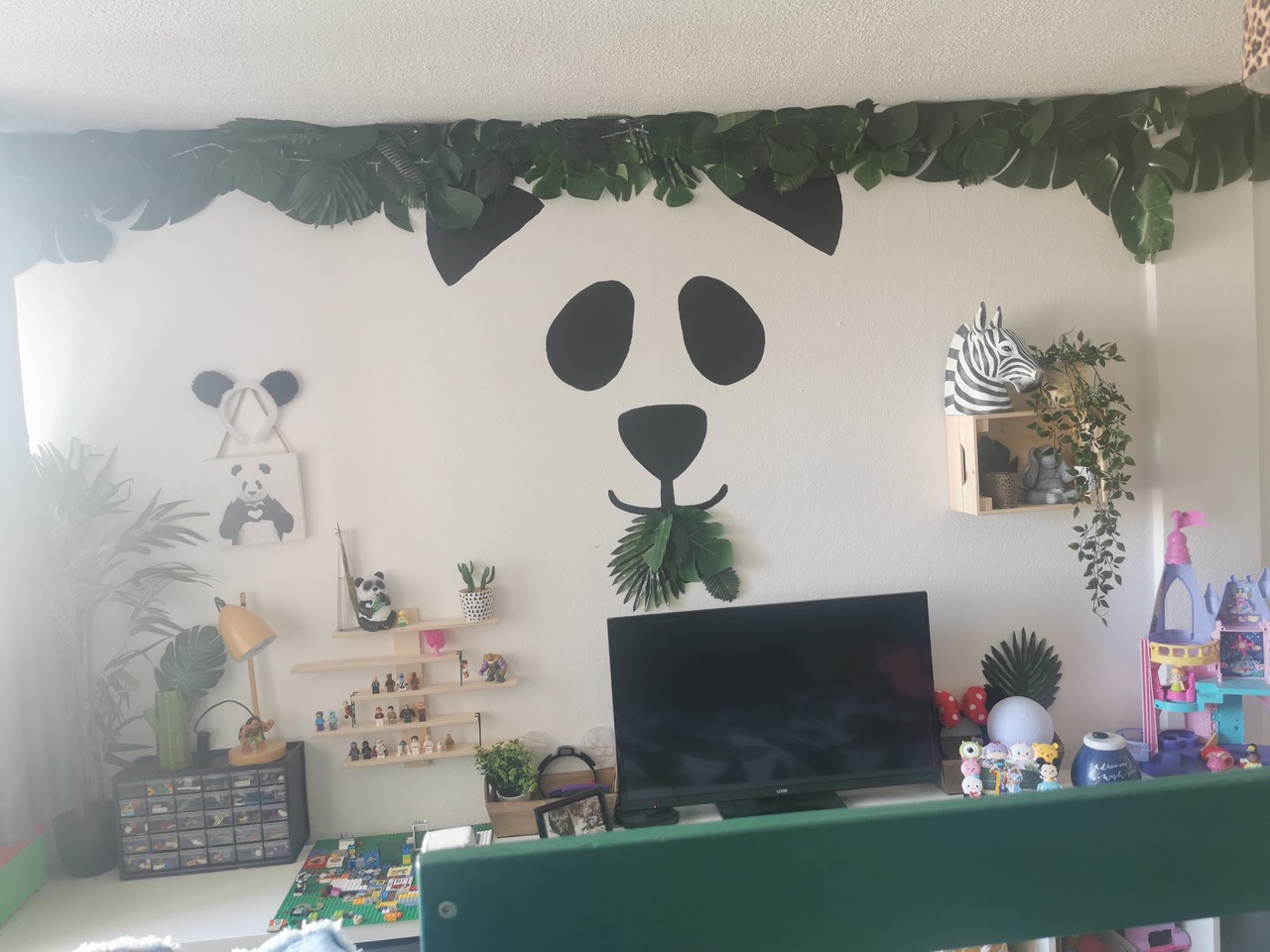 "I found a tiger stripe pattern I liked on Google Images and copied that," she said. "I actually set it as my screen saver so I didn't have to keep unlocking my phone."

"I then wanted to recreate the wallpaper I so desperately wanted but could never afford at about £70 per roll, so I painted the wall white and then painted the spots on with the tip of a paintbrush with the same Frenchic as the stripes."

On another wall, however, Becky has painted a large, and adorable, panda face.

Explaining the inspiration behind the monochrome wall,Becky explained that her little boy, Jack, "absolutely adores pandas."

She said:"I made a similar panda face as part of the decorations for his panda birthday party last year so I recreated that." 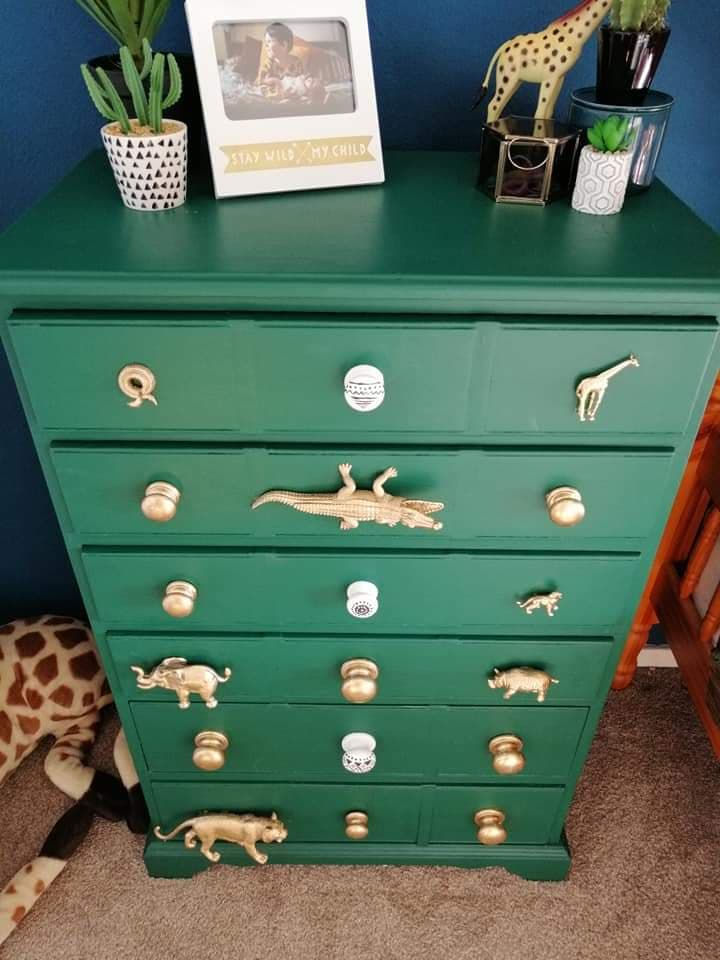 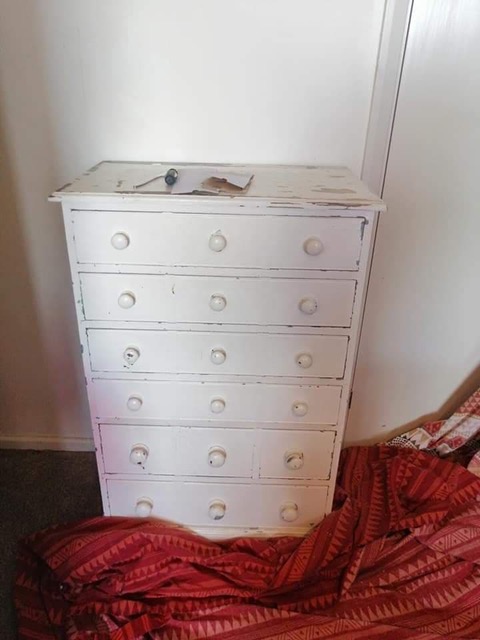 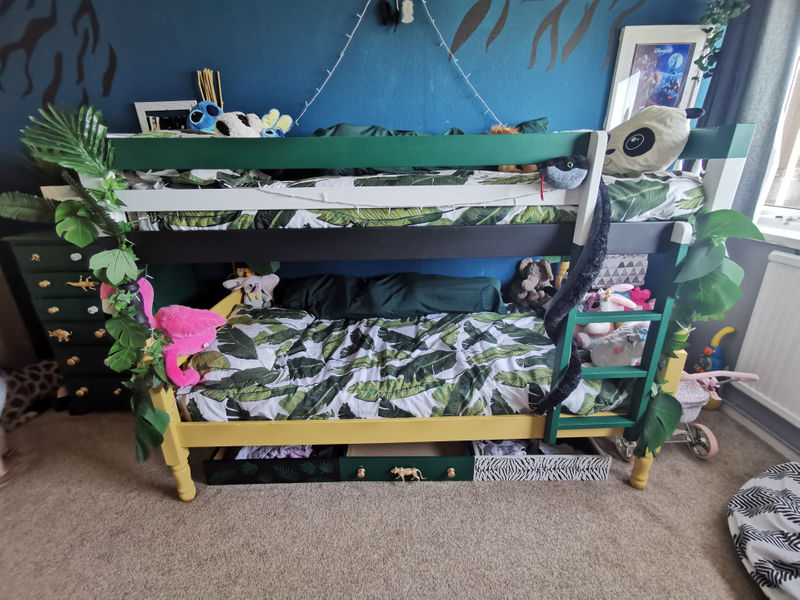 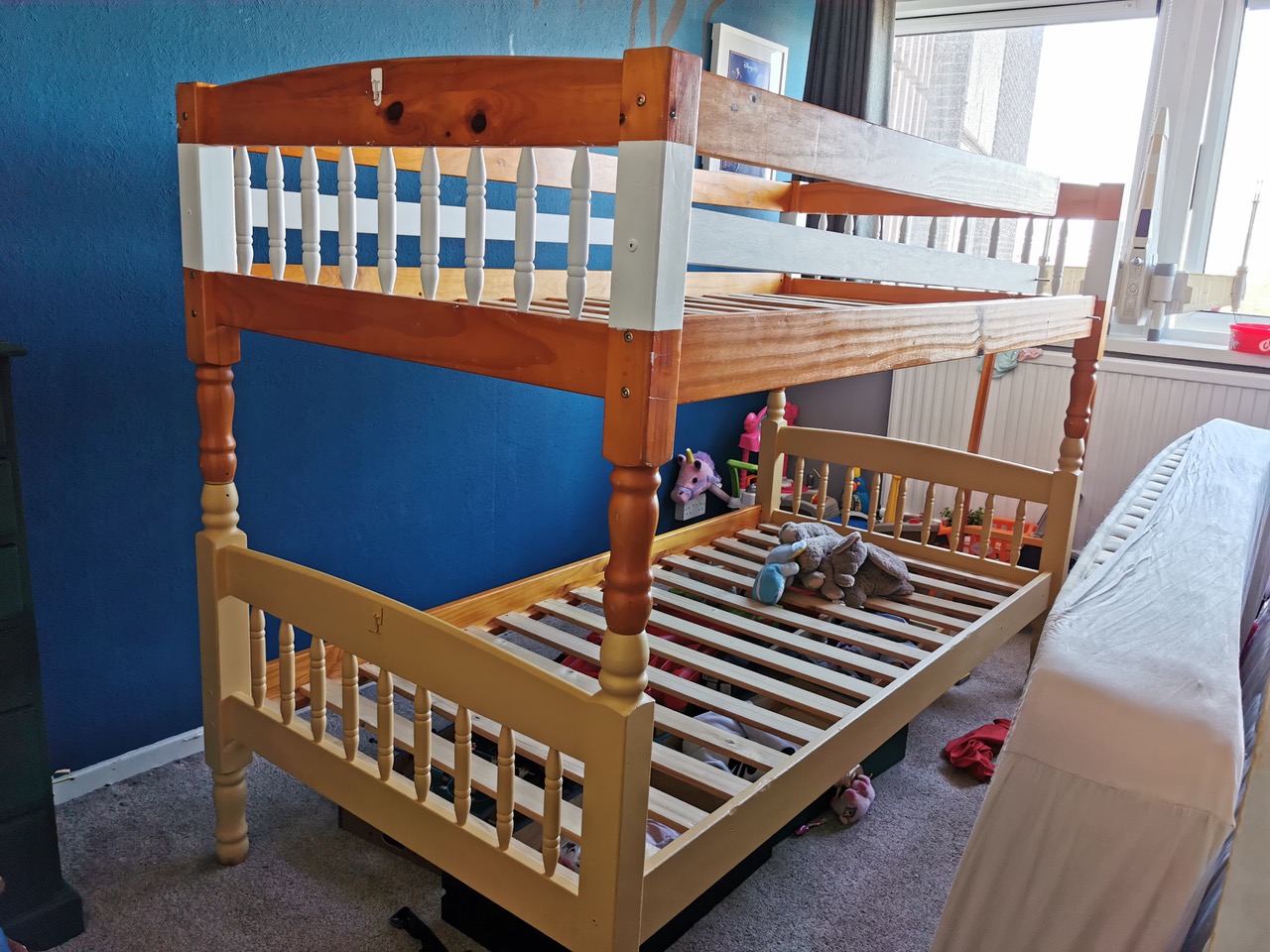 And added: "The palm leaves in his mouth were because I messed up painting the mouth freehand, so I just covered that with leaves and at the top of that wall were some leftovers from said party."

Although Becky admitted to having to buy more from Amazon for £9, the rest managed to come in handy as she used them to decorate the bed so the kids felt like they were sleeping in a real jungle.

As for the beds, the crafty mum explained that she used four different colours from Frenchic – Dazzle Me, Loof, Hot as Mustard and Victory Lane – as she was worried she wouldn't have enough of any one colour.

But nothing in the room was left untouched as Becky then painted the toy chest, saying "there was no way I could leave orange pine in that room". 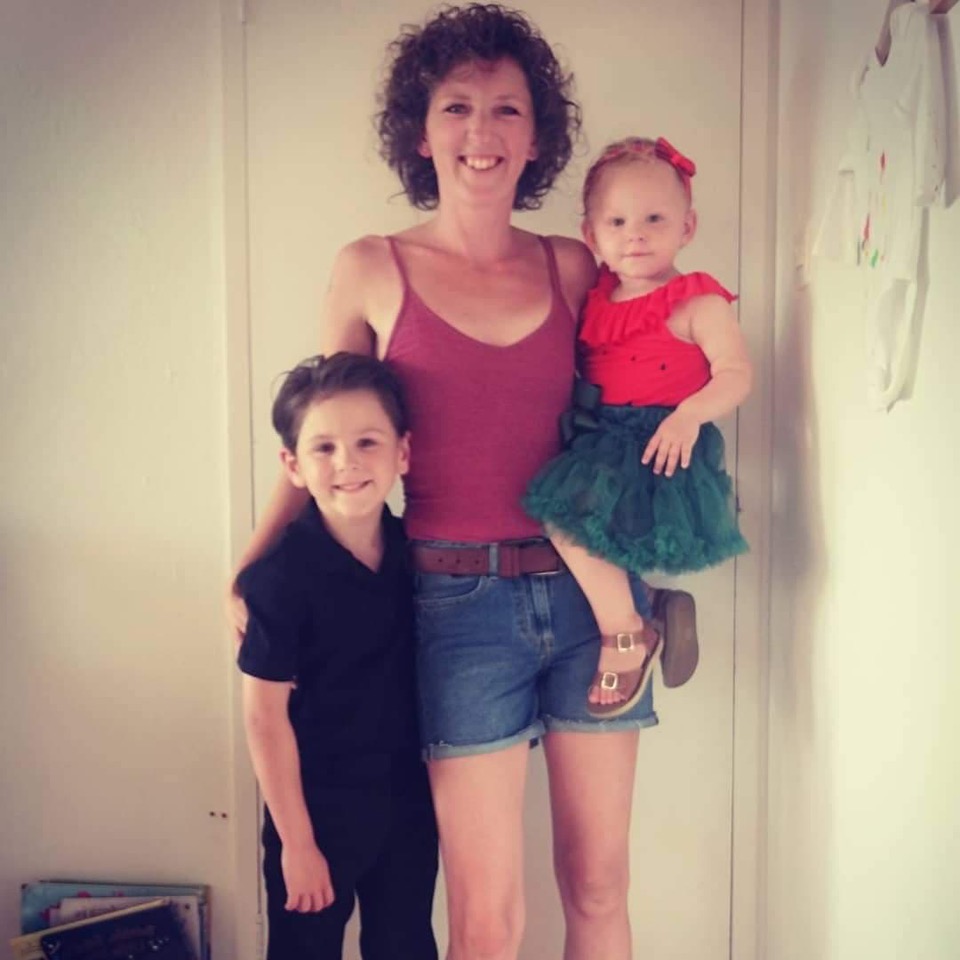 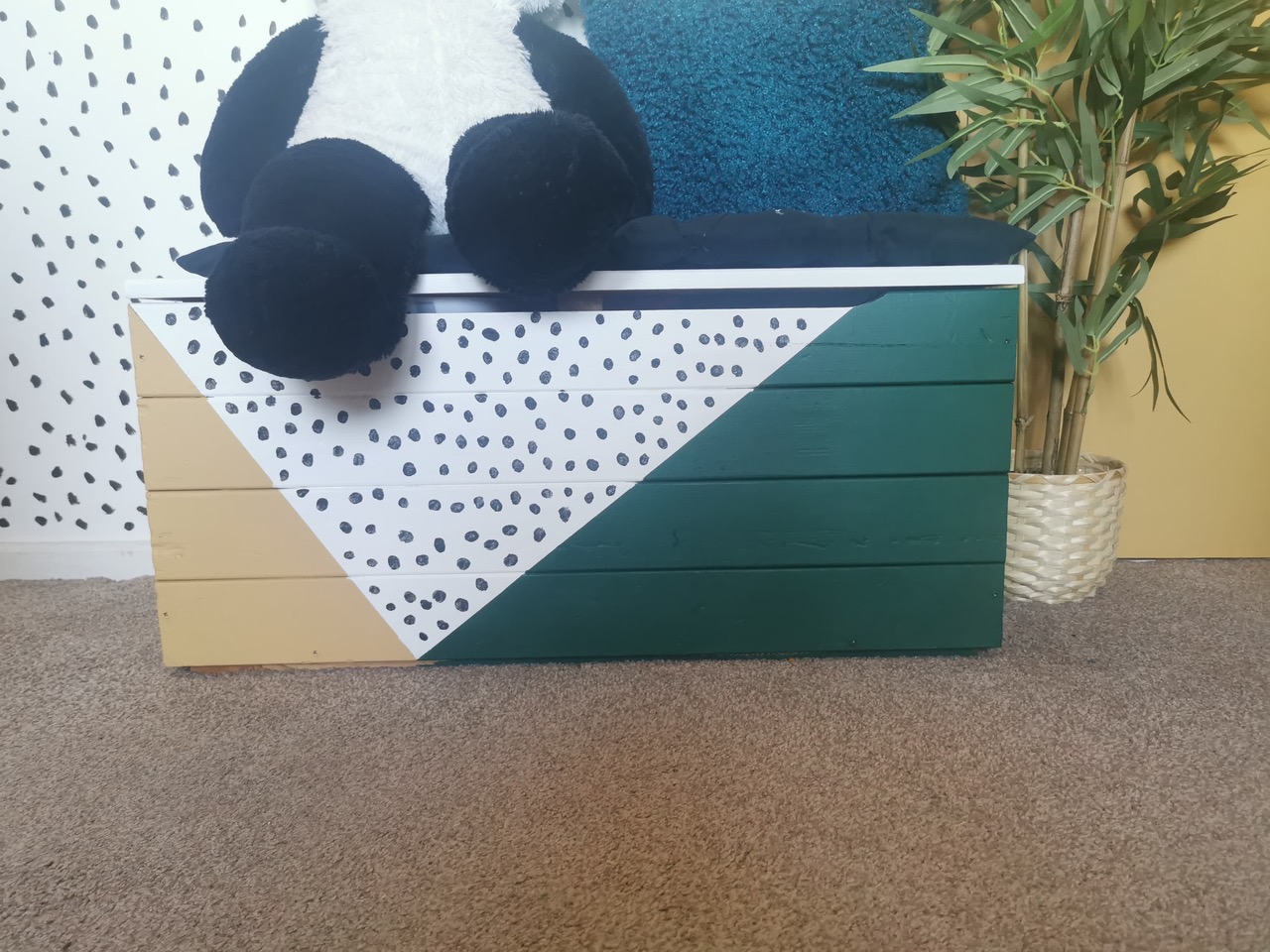 Meanwhile the drawers under the bed were recycled from a piece of furniture she was throwing out which she upcycled to match the fun decor.

Further adding to the "magic" of the room, the clever mum finished up by adding  a few artificial plants for a bit more of a jungle vibe, and weaved fairy lights around the bed and window frame.

Becky admitted the whole thing was able to be done for less than £150 just by using a "bit of an imagination".

She also said that the project was an ideal distraction during the lockdown, and proved to be a great creative outlet during the stressful time.

"I loved doing this as it gave me something to focus on when the world stopped and something to have some control over with routine completely out of the window," she added. 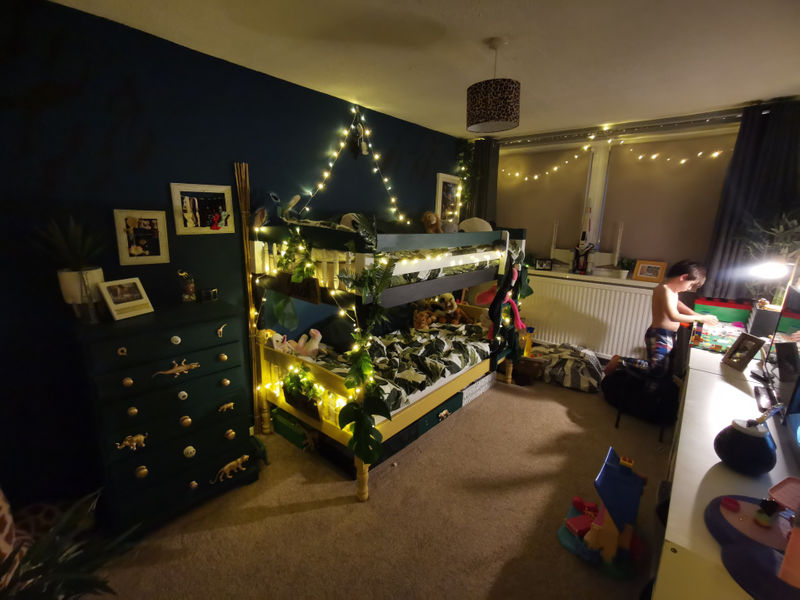 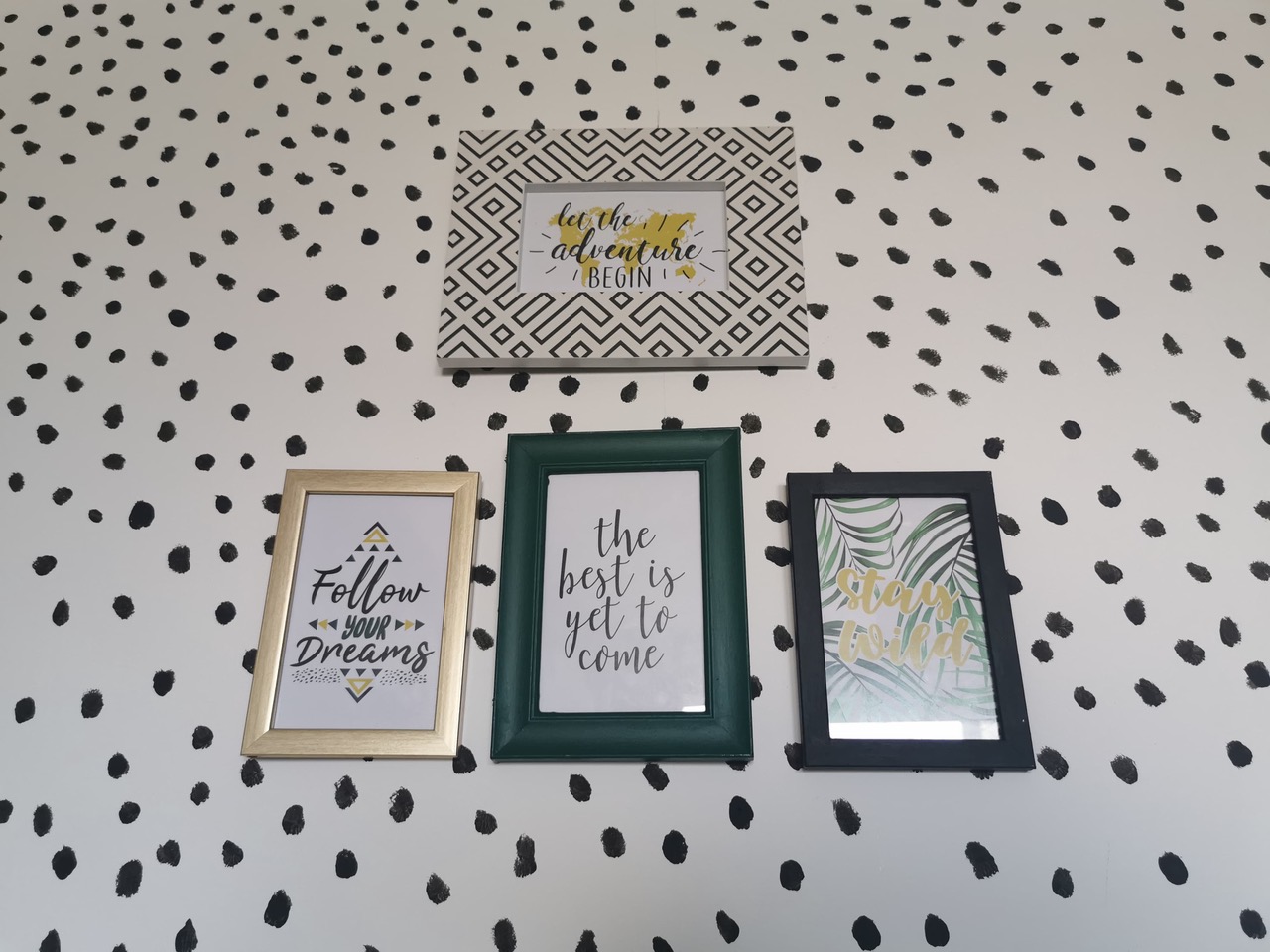 "It's been easy with ordering things online or popping to my local Wilko and The Range. It gives me such a great sense of achievement especially doing everything on my own.

"I have no design experience or anything but the praise from friends for the creative things I do and the response from the jungle room post online has given me the drive to apply for an Art and Design access course at Southend Adult College!2

Tom Church, co-founder of LatestDeals.co.uk, commented: "Home renovations are notoriously expensive, but Beckie is proof that you really can do it on a budget if you stick to budget materials and brave the DIY yourself rather than outsourcing it!

"Her kids now have an amazing jungle bedroom they must absolutely love – and all for under £150!

We also shared how a woman transforms her grotty bathroom into a sophisticated space using bargains from B&M and eBay.

Plus a savvy DIY fan who couldn’t afford £360 ‘crushed diamond’ coffee table made her own using coasters from The Range.

And a savvy mum shows how she used Poundland and Wilko bargains to create The White Company dupes – and it’s so easy.