During the initial coronavirus lockdown last year, Rime Arodaky, a wedding gown designer, and Greg Finck, a wedding photographer, spent six weeks in a friend’s country home in Provence, France. There they home-schooled their son, Andrea, 3, and Mr. Finck’s daughter from a previous marriage, Juliette, 9. They slowed down from their hectic life in Paris, where they jointly ran Ms. Arodaky’s namesake bridal gown company and Mr. Finck managed his wedding photography business. The Provence house was a refreshing escape from their two-bedroom apartment in Paris. They had country air, farm-to-table food, local wine, and plenty of tractors to excite their toddler.

Soon they found themselves embarking on a new project. They scoped out a property next door, an 18th-century farmhouse with an English-style garden. It was close to their friends and appeared to have sturdy bones. But they couldn’t see the interior. The owners were locked down at home in Britain, and curtains covered the windows. Mr. Finck figured that it couldn’t be too bad, and they made an offer.

Turns out, a lot can go wrong. The inside of the home was “the worst-case scenario,” Mr. Finck, 40, said. It would need a gut renovation. The couple laughed. Wasn’t that a metaphor for life right now?

When you look at Mr. Finck’s Instagram account, it seems like life is perfect for this picturesque family of four: an apartment in Paris with stunning minimalist interior design, two successful companies and a loving relationship. But like any couple, the life you don’t show online is the one that’s often messier and full of challenges, especially during a pandemic. The couple said it was a tense year full of questioning themselves, managing the multiple lockdowns and curfews in France, postponing their Bali wedding, and celebrating the joys amid it all.

“I was afraid at first — concerned and doubting because it was, and still is, so unknown,” Ms. Arodaky, 39, said. “But this past year has just proved to us that we are strong enough to do what we love with passion and find means and ways to keep it alive and exciting.”

Focus on a Project

Mr. Finck and Ms. Arodaky credit the home project as a major enhancement to their moods. The pair, who have been together for seven years, were set to say “I do” with a destination wedding on the Indonesian island of Bali in the summer of 2020. The plans had been in the works for two years, so when they postponed the event until 2022, they felt like they needed something to occupy their time.

When the opportunity arose to buy the home near the village of Grignan in the Drome Provençale, after approaching the owners about selling, they jumped. For two years, the couple had wanted a pastoral place to balance their time spent in a bustling city.

“Without the lockdown, there is no way we could have led the project,” Mr. Finck said. For the past nine months, they have been designing, demolishing and rebuilding the home to maintain it’s Provençal roots, while adding their own touch, a blend of Scandinavian and Californian details.

It has come with some disagreements. Ms. Arodaky heads the design and Mr. Finck manages the budget. Ms. Arodaky said she learned to coordinate design desires with budgets, noting this was something she had to do at her company, where Mr. Finck has been general manager for the last three years. “I was a bit of an anarchist a few years back,” Ms. Arodaky said. “I have learned, and now I try to take time and listen.” 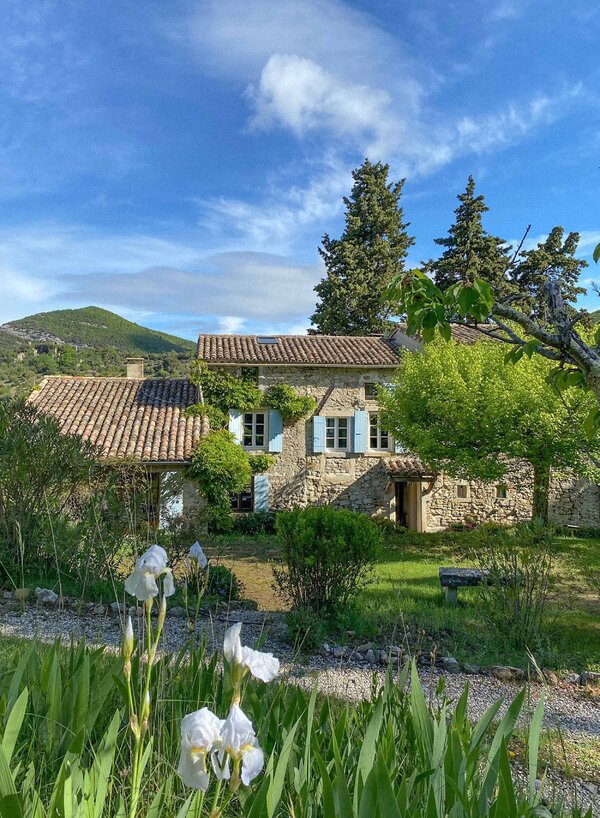 Ms. Arokay and Mr. Finck are used to collaborating. When Mr. Finck joined Ms. Arodaky’s team, he took over a chunk of the business side so that Ms. Arodaky could focus on the creative. She said that designing a home is similar to designing wedding gowns. It all starts with a mood board, gathering materials, managing a team of workers and overseeing the process.

Luckily, during the lockdowns in France, in November of 2020 and March 2021, the couple could go to Ms. Arodaky’s atelier while the children returned to in-person school. Despite the French restrictions on nonessential businesses and curfews — everyone must be off the streets by 6 p.m. — Ms. Arodaky and Mr. Finck obtained the necessary papers that allow them to work from the office. For Ms. Arodaky, it was a relief. At her studio are her fabrics and swatches, sketches, and a team of 20 seamstresses. It’s not the sort of business that can easily transition to Zoom.

They were also still selling dresses. While couples in the United States and Europe postponed their large celebrations, others opted for intimate gatherings or civil ceremonies. Those brides would need something to wear.

Ms. Arodaky is known for her edgier approach to bridal fashion, and her “Patsy” jumpsuit was one of the most in-demand looks for brides even before the pandemic. The company, Maison Rime Arodaky, saw sales double from the e-commerce shop, where Ms. Arodaky sells more casual attire. Retailers also continued to place orders for her dresses, which retail for $4,000 to $7,000, and Ms. Arodaky was busy with projects as part of her couture line, where gowns go for as much as $15,000.

At the same time, the couple set up to move to a larger space near the major Parisian-based couture houses and the Avenue des Champs-Élysées. The new studio also required a renovation to that 18th-century building. “I am a firm believer that in times of crisis you have to invest, because you are going to be more visible,” Mr. Finck said. “We want to sustain the industry and the market by saying, ‘2022 will be the biggest year ever.’”

While Mr. Finck brings his business savvy to Ms. Arodaky’s company, it’s not his primary creative pursuit. As a wedding photographer, he went from shooting 20 events a year to only one in 2020. Prepandemic, he traveled 50 percent of the time, jetting to places in Africa, as well as Italy, Mexico, Thailand and Portugal, to shoot destination weddings for American clients. With those events on pause, he felt the weight of forced grounding. He photographed his last wedding in November 2019, then came the Covid lockdowns in March 2020.

So Ms. Arodaky worked some magic this past January. “For my 40th birthday, Rime took me to Lapland, just the two of us for a week,” Mr. Finck said. He packed his camera. “It felt so good to be shooting again, to be part of an adventure again.”

But most of the time, the couple spends free time together at home. This part is not all that different from life before the pandemic. Ms. Arodaky notes that they, quite simply, enjoy conversation with one another. “We love to end the day with a glass of wine and share ideas without anyone around,” she said. “Sometimes, just a moment and we’ll get inspired from each other.”

The wine cellar at the new country home, given its proximity to the winemaking region, will be filled with bottles from Hermitage, Châteaneuf-du-Pape and St.-Joseph. It’s one task of the renovation that excites Mr. Finck in particular.

They watch a lot of Netflix. She and Mr. Finck are fond of documentaries. They like the takeaways on leadership that they can adapt to their own roles at their businesses: the struggle to stay on top of their game while facing challenges, managing their brands, leading their teams, and embarking on entrepreneurial endeavors.

“I used to consider myself a designer only when I first started,” Ms. Arodaky said. “But Greg taught me to be a leader and a business owner, not just the creative one.”

If the pandemic has reinforced anything, she said, it’s that what you may be known for is just one facet of their story.