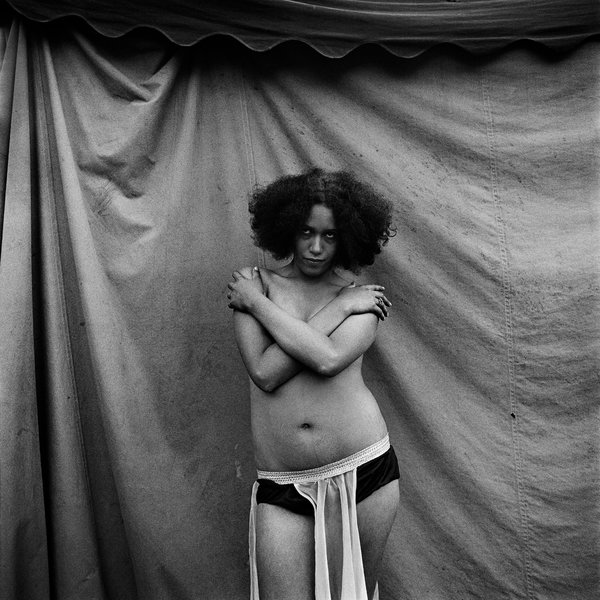 Susan Meiselas, the much-lauded Magnum photographer perhaps best known for her arresting 1979 shot of a Nicaraguan revolutionary lobbing a Molotov cocktail, said she was caught by surprise when Sam Stourdzé, the director of the Rencontres d’Arles photography fair in France, phoned in April to say she had won a major new award — from a luxury fashion group.

“I am the least fashionable person you might ever know,” the 71-year-old Baltimore-born documentarian said last month during a hot summer evening in her studio on Manhattan’s Mott Street. “I mean it.”

She was dressed in a short-sleeved madras shirt that she had bought in India “about 35 years ago,” black trousers and fuchsia running shoes. She wore no makeup and her reading glasses were perched atop her head of shoulder-length auburn hair. The space — the naturally cool basement of a Victorian building where she has lived since 1974 — was crowded with long tables stacked with photography books, newsmagazines and other detritus of a life spent, as she said, “humping about” war zones and backwoods, Leica M4 in hand.

So why, she wondered, was she receiving the first Women in Motion photography award from Kering, the Paris-based conglomerate that owns Gucci, Yves Saint Laurent and Balenciaga? Was fashion, which has been co-opting art photographers for some time, now turning its attention toward documentary and news domains to give its wares a more serious — or at least less frivolous — air?

Possibly. Though François-Henri Pinault, Kering’s chief executive, has said the prize is an acknowledgment of a long-held gender imbalance.

About 75 percent of the photography students around the world are women, but only about 15 percent manage to turn their skills into a career, Kering said in its announcement of the award, using statistics that it said had been drawn from several sources. It also noted that women took just 12 percent of the pictures that appeared in France’s daily newspapers in 2017, and that few of the World Press Photo winners in 2015, 2016 and 2017 were women.

And in 2017, according to Fashionista, only 13.7 percent of 153 covers from 10 leading American fashion magazines were shot by women — Marie-Claire had none. Shocking statistics given that fashion is a female-centric and -driven business.

In advertising, the disparity is worse: Jill Greenberg, a photographer and founder of Alreadymade, an online directory of women photographers, said that her review of advertising agency output from 2013 to 2017 showed that women had photographed less than 10 percent all of ad imagery. “Commercial photography is still perceived to be a man’s job,” she said in her TEDx talk last year. “In the real world of commercial photography, women are not getting the same opportunities.”

Last September, the French daily Libération published an open letter signed by 300 industry leaders calling out Mr. Stourdzé and the Rencontres d’Arles for a lack of female photographers in the festival’s 2018 iteration.

Headlined “Où sont les femmes?” — or “Where are the women?” — the letter charged that only three of the 15 major exhibitions were dedicated to work by women, and only rarely has the festival’s showing of works by women exceeded 20 percent.

In an effort to begin closing that gap, the festival worked with Kering to create the prize, which will be presented on Tuesday as part of the fair’s 50th edition. It includes a check for 25,000 euros, or $28,420. (In comparison, the World Press Photo Story of the Year winner gets €10,000 and the Pulitzer Prize photography winners each get $15,000.)

Mr. Pinault said he saw the award as a natural extension of the luxury group’s five-year-old Women in Motion forum/award, held during the Cannes Film Festival and conceived to focus attention on the lack of female representation in the movie industry.

“We wondered, ‘Why is there discrimination in photography? Why are there more men than women?’” Mr. Pinault said in May over tea at the Majestic hotel in Cannes. “There needed to be a reckoning.”

It’s a valid point — yet is a prize the answer? While a large number of the digital, accessories and capsule collection campaigns from Kering brands are shot by women, the majority of the most high-profile gigs — the ready-to-wear print and digital portfolios prepared each season — are still shot by men. (Consider Glen Luchford’s many campaigns for Gucci, the recent work by Juergen Teller and David Sims for Saint Laurent, and, while Balenciaga went with Catherine Opie for fall 2018, it since has hired Yilmaz Sen and Jean-Pierre Attal.)

“We believe that equality will also be met by triggering the discussion, participating in research that will feed the debate, creating the conditions for change, as well as casting a light on female talent,” a Kering spokeswoman said in a prepared statement. (Company policy does not allow her to be identified.)

Mr. Pinault echoed that sentiment in Cannes. “Why are there more men than women?” he asked. “Because in the beginning, there were more male photographers than female. And why? Because there were fewer breaks for women.” He said he was trying to create those breaks in his own brands. Obviously, there is still a ways to go.

As for Ms. Meiselas, who received the Robert Capa Gold Medal from the Overseas Press Club of America for “outstanding courage and reporting” in 1979, a MacArthur Fellowship in 1992, the International Center of Photography’s 2005 Cornell Capa Award, a Guggenheim Fellowship in 2015, and, in May, the prestigious Deutsche Börse Photography Foundation Prize, “it was the title of the award — Woman in Motion — that got me,” she said. “I really wanted to identify with that idea.”

“I’ve had a few little bouts with shooting fashion,” she said, including a portfolio last year for Garage magazine based on her 1995 pictures of dominatrixes at the New York S-and-M club Pandora’s Box. “And, actually, the Nicaraguan photographs” — her award-winning coverage of 1970s revolution that included “Molotov Man” — “at some point were critiqued as being about fashion, though I didn’t know how to read that.”

Kering has not asked her — yet — to photograph an ad campaign for one of its brands. And if such a request did come, she is not sure she would accept.

“I don’t know about the whole luxury brand part of it because that’s not my life,” she said. “But I do feel I’m still a woman in motion.”