There’s an intergalactic brew hitting shelves soon, and it was created by an all-woman team. California-based 21st Amendment Brewery partnered up with the Pink Boots Society — a nonprofit that supports female brewers — to create a limited-edition India pale ale (IPA) that’s out of this world with #girlpower. If you’re looking for a new brew this spring, keep an eye out for 21st Amendment Moon Boots IPA coming in April 2021.

21st Amendment Brewery, which is based in San Leandro, California, is bringing a women-led celebration in a can with its limited-time Moon Boots IPA. The brew, which was announced on Feb. 17, pays homage to the women who created it, and it will help fund $5,400 for Pink Boots member-exclusive scholarships at eCornell University, a subsidiary of Cornell University which offers certificate training programs. As you wait for the feminist sip to land in stores in April 2021, here’s everything you need to know about the pink brew.

When the 6.5% ABV brew does launch, you can expect the Moon Boots IPA to feature a clean and crisp taste. It’s brewed with pilsner malts to give the brew a soft and sweet malty flavor, toasted rice, and strawberries. Plus, it wouldn’t be an IPA without hoppy goodness, so Moon Boots will feature three different hop varieties — Citra Cryo, Azacca, and Mosaic hops.

The packaging — which envisions the brew’s creators as "otherworldly beings" — was designed by LA-based artist Robin Eisenberg, whose work celebrates female diversity and sexuality with a cosmic twist.

Starting on Thursday, April 1, you’ll be able to buy a 6-pack of Moon Boots IPA for $13.99 at retailers where beer is sold in 32 states and Washington D.C. To find 21st Amendment Brewery’s sips near you, check its online product locator. 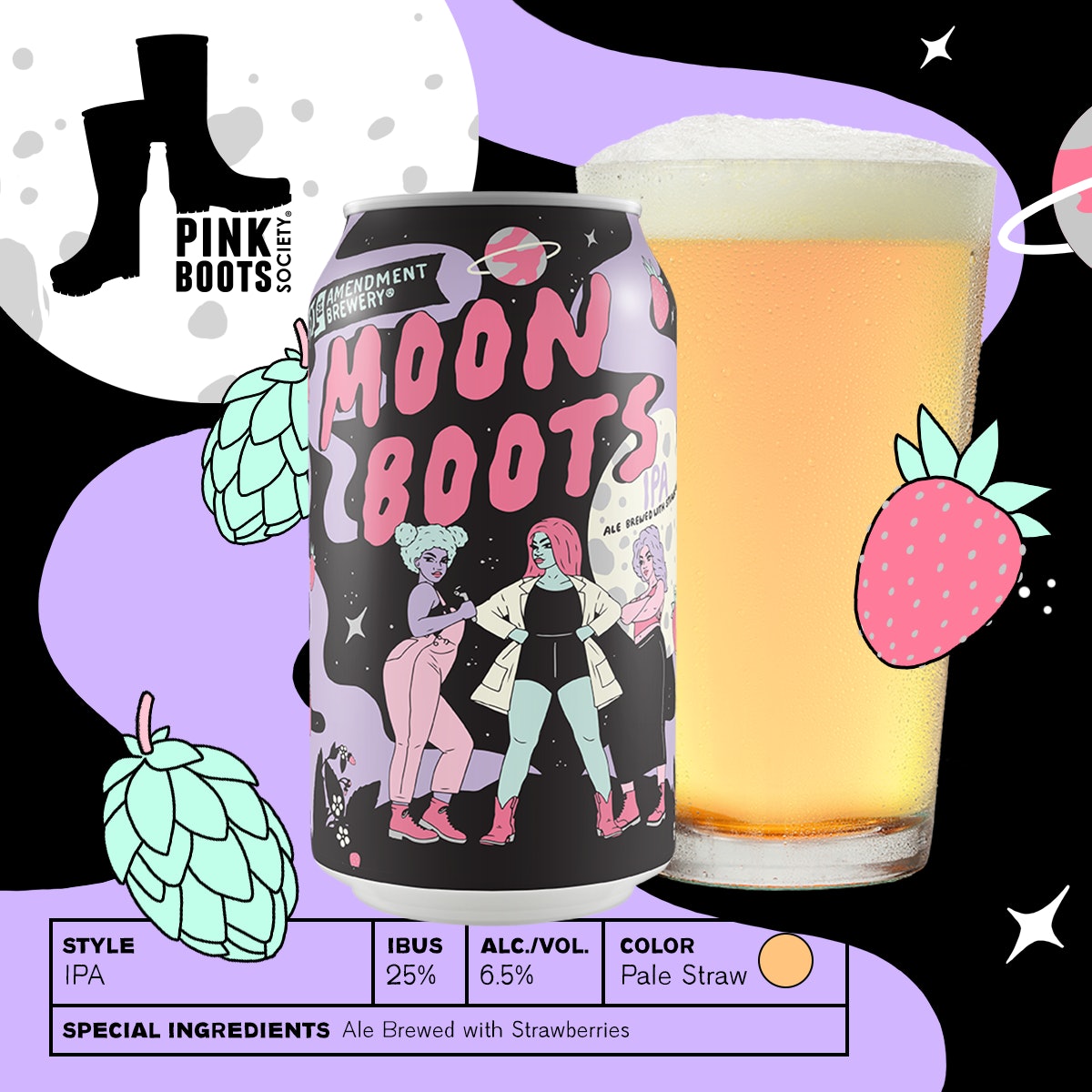 If you’re wondering how the special brew got its start, Moon Boots began a couple years ago as a small batch beer called Pink Brüts!, according to the brewery’s national sales manager Sarah Swafford. It debuted for International Women’s Day 2019 at its downtown San Francisco brewpub, and ~obviously~ did pretty well, because 21st Amendment decided to launch it more broadly this spring as a limited-time release.

Whether you’re waiting for the launch or checking out other brews from 21st Amendment, it’s best to keep in mind the coronavirus safety recommendations from the Centers for Disease Control and Prevention (CDC)as of Dec. 31. When possible, order your beers using an alcohol delivery app like Drizzly or a curbside pickup method to limit your exposure to others. If you do go out, wear a face mask over your mouth and nose, practice social distancing from others, and wash or sanitize your hands after leaving the store. You’ll also want to wash your hands before you crack open a brew.

If you think you’re showing symptoms of coronavirus, which include fever, shortness of breath, and cough, call your doctor before going to get tested. If you’re anxious about the virus’s spread in your community, visit the CDC for up-to-date information and resources, or seek out mental health support. You can find all Elite Daily’s coverage of coronavirus here.