Growing up, I was always a little heavier than most. Over time I went from being a little heavier to a lot heavier. It definitely crept up slowly. Nobody wakes up one day astonished to find they turned obese over night. It’s a pound-by-pound change.

I did a lot of mindless eating, just not paying attention. I could eat a whole bag of chips before I even knew what happened. Eventually you get to the end of the bad and you say to yourself “damn.”

I had a lot of back and knee pain at the time, but mostly I felt helpless. I just felt like, no matter what I did, I was always going to be fat. At my heaviest, around my 27th birthday, I weighed 278 pounds.

Being diagnosed with sleep apnea was a big moment. Being told you’re so fat that sleeping, literally on its own, could kill you is a real shock. Living in the Tampa Bay area, I’m close to a lot of great beaches, but I never wanted to go out of fear of taking my shirt off in public. As I approached 30 years old I was tired of feeling that way. 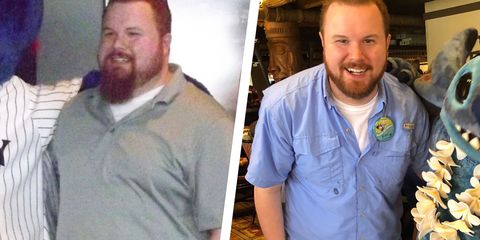 For me, carb reduction was what worked. I began on the paleo diet; in the years I’ve been on a low-carb diet, I’ve worked out maybe 15 times. I think cardio and weight training is beneficial, but weight loss happens in the kitchen. I cut out all of the bread, chips, cookies, sodas, and beer and replaced them with steaks, green vegetables, and water.

“Working out” is still something I need to get in a better habit of. I know that working out has lots of benefits that I can’t get anywhere else, but I’ve never really been that motivated to stay consistent with it. My weight loss has been accomplished almost solely through changing what I eat.

I’ve been on a low-carb diet going on four years. In that time I’ve lost 95 total pounds. Along the way I’ve gained a few back here and there, but that’s the way it goes. Weight loss does not always happen in a straight line. The feeling, then compared to now, is night and day. I have more energy, I sleep better, I have more self confidence, I enjoy things (like the beach) that I never did before. There’s also a strong feeling of accomplishment that comes from setting a series of goals and meeting them.

I’ve had a tremendous amount of support from friends and family. When someone who has only ever known you as fat tells you they’re proud of you, that’s a big moment. Since setting out on losing weight I’ve started a new career, moved a few times, and married my soulmate. These latter developments were not a result of losing weight, specifically, but a result of the same thinking that pushed me down the path of losing weight. I wanted to improve my life, across the board, weight loss was a piece of that puzzle.

It might sound cliche, but it’s so true: It’s never too late to start and you don’t have to be perfect. That’s true with anything, most of all with losing weight. Just get started. Figure out the rest along the way. —As told to Jesse Hicks