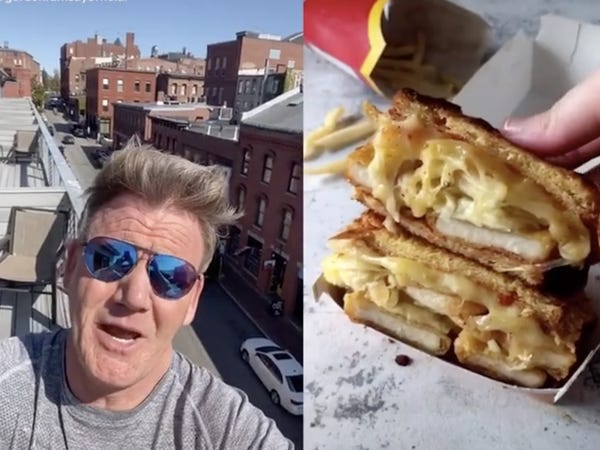 Gordon Ramsay is back with new "#RamsayReacts" TikTok videos, taking aim at home chefs who dare to ask for his opinion on their favorite dishes.

And the "MasterChef" star was less than impressed by one user who made a sandwich with McDonald's chicken nuggets and fries.

"Whoever made this is an actual idiot sandwich!" Ramsay wrote in the caption of his video, which has received more than 6.8 million views at the time of writing.

The original cooking video, posted by the TikTok account @caughtsnackin, demonstrates how to make a "McNuggets cheese toastie."

Ramsay is horrified from the start when he begins to watch the clip.

"Oh no, seriously?" he asks with a shake of his head as @caughtsnackin first shows off the sandwich.

The home chef then puts some cheese on a pan, adding two slices of Brioche bread on top.

"Oh no!" Ramsay exclaims again, throwing his head back in shock as the chef gives their cheesy bread a flip.

The @caughtsnackin chef then spreads ketchup on the bread before adding a layer of McDonald's chicken nuggets on one of the slices.

They then add a pile of McDonald's fries on the other slice of bread before topping everything off with "a little bit of grated cheese."

The home chef then closes the sandwich and gives it a final squeeze with the spatula. He plates it, cuts it in half, and proudly pulls the sandwich apart to show all the oozy cheese in the middle.

While "idiot sandwich" is a phrase that Ramsay famously coined in 2015, the Michelin-starred chef has begun utilizing his most famous comeback quite frequently recently.

Ramsay rehashed his iconic insult back in August while critiquing a TikTok video that showed a food blogger making a bell pepper sandwich.

"That is not a sandwich," Ramsay exclaims in the clip. "No, that is not a low-carb sandwich. Young lady, that there is an idiot sandwich!"

And Ramsay deployed the phrase yet again in September when a number of Twitter users criticized his restaurant's new breakfast dish.

Some added photos of what they claimed to be more authentic full English breakfasts, but Ramsay — as always — was hardly impressed.