“I was 30, more than 270 pounds, and it was a burden,” says Paul Eulette, now 33. Weight crept on slowly, starting in his teens, “partly from the emotional comfort I got from my family’s favorite Caribbean dishes and partly due to the cultural norm of overindulgence in food,” he says. By age 30, “I was single, had pain in my joints, felt sluggish, and it felt like the beginning of a downward spiral for my health and overall future.”

“It dawned on me that my weight had gotten out of control when I was embarrassed to take my shirt off at the pool, even in front of my family,” he says. A move to New York City in 2016 underscored what he already knew. “Being winded walking up the stairs of the subway or complaining about walking a few blocks instead of taking a cab was a realization that something needed to change,” he says. On top of that, he says, he’d lost family members over the years from poor health, and even his doctor said, “you won’t make it too long past 30 at this rate,” he says.

Losing weight and getting fit “was a slow process,” he says. “I started walking. Walking to the train. Walking across town, or walking to or from work (3 miles) on nice days.”

When he lost a few pounds, friends noticed his efforts and encouraged him to run. “My first real run was rough, but I powered through the embarrassment of only being able to run two blocks before walking,” he says. Soon, he ran his first mile, then more and more, and kept slimming down.

But that didn’t feel like enough: he knew he needed to build muscle and change how he ate. “Once I felt a sense of accomplishment from running, I opened myself up to new exercises. I purchased a workout class package for various studios and tried spinning, dance, weights,” he says.

They were all fun, but it wasn’t until he found Row House—a boutique studio specializing in indoor rowing—that things really clicked. “It gave me a cardio workout similar to running, but also full-body strengthening and helped with mobility. It made me realize how much I was underutilizing my body,” he says. “The misconception that rowing is boring is the same as trying one bad veggie burger and saying, ‘healthy food tastes bad,’” he says. “You need to find the right recipe, and Row House had the perfect recipe of rowing, HIIT, strength, floor work, and great instructors who work with you to not only crush it at rowing, but keep you motivated in other places.”

After he started incorporating rowing, he lost 45 pounds, on top of the 25 he’d lost from just running. In 16 months, he lost about 70 pounds. To keep getting stronger, leaner, and row better, he added in more weights, which increased his lean muscle mass. Now, he’s weighing in at 210. 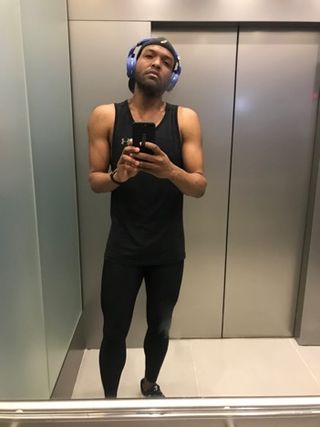 Eulette didn’t just cut calories, cut carbs, or cut fat when he wanted to change his way of eating. “I learned to properly portion the foods I loved as reasonable treats to reward my progress,” he says. “That meant less cultural (Jamaican) hard dough bread, dumplings, corn meal porridge, bun & cheese and less hometown (Atlanta) fried food, late-night waffles, biscuits and gravy, and grits. And it meant more vegetarian alternatives to my favorite savory foods, and going for all the fresh fruits popular in Jamaica—papaya, mango, guava, starfruit, guineps—that are all readily available in NYC.”

Is he finished with his healthy journey? Eulette doesn’t think he’ll ever be finished: “I know the activities of my 30s will affect the health of my 40s and 50s. My goal is to sustain my health and weight and keep getting stronger.”