Some desserts are made to be eaten while wearing a tight-waisted ballgown or a perfectly tailored little black dress. Light-as-air macarons or adorably tiny petits fours are the post-prandial choice of the sort of person who nibbles daintily, brushes crumbs away from still-lipsticked lips and declares, “I couldn’t eat another bite.”

Gooey butter cake is not that kind of dessert.

In its birthplace of St. Louis, GBC is the sort of treat that’s best enjoyed while wearing the roomiest sweatpants possible, preferably while standing at a kitchen counter (perhaps while still a bit hungover) or seated at a splintery picnic table at a swelteringly hot family reunion (perhaps while ankle-deep in chiggers, an essential part of the Missouri summer experience). It has never been — and couldn’t be even if it tried — a dessert that puts on airs.

Its looks are unassuming, to put it kindly. In the traditional version, it’s served directly in its baking pan and covered with nothing more than a light dusting of powdered sugar. Yellow, flat and unadorned, it lacks height, depth and decoration. But take one bite and you’ll realize that, despite its humble looks, gooey butter cake will get you right in the feels: buttery, sweet, crunchy and creamy sensations come with each blissful bite.

If you’ve never eaten gooey butter cake, try to make do with this description until you can get to the nearest kitchen and start baking one on your own. First, there’s the more-cake-than-crust bottom layer, with crispy, blondie-reminiscent corners that allow aficionados to choose their preferred eating experience ― soft and crumb-like on the sides, or with maximum crunchability at the corners. Once your perfect piece is cut and lifted from the pan, you’ll be nibbling your way through the topping, a custard-like culinary masterpiece that’s sometimes created with corn syrup, butter and eggs, and, in updated versions, is often amped up in unctuousness with the addition of cream cheese.

Is this the most beautiful cake in the world? It is not. Is it one of the most surprisingly addictive? Yes it is, as evidenced by the fine citizens of this city on the Mississippi River, who serve it just about anywhere people might hanker for a sweet pick-me-up. It’s sold from countertops at neighborhood bakeries on The Hill, hawked in stalls at the Soulard Farmers Market and served on fine china plates at chic suburban bistros, looking positively dainty for such a schlub-at-heart dish.

Was gooey butter cake an accident?

Thanks to its significant German immigrant population, St. Louis always had a plentiful supply of corner bars (serving up lots of beer, including Anheuser-Busch products, since the brewery was founded in south St. Louis). The only thing those early residents loved as much as beer was sweet baked goods, so the corners of St. Louis that weren’t occupied by taverns filled up with neighborhood bakeries. Lots of bakeries meant lots of competition, which led to increasing attempts to come up with new sweet treats that would keep customers streaming to your little corner of the world.

Although there are many versions and variations of the story, the basic legend goes like this: the first gooey butter cake most likely was made sometime in the 1930s at St. Louis Pastries Bakery. It was cooked up by baker John Hoffman, said Dale Schotte of Park Avenue Coffee. But Hoffman mistakenly reversed the proportions in his cake batter. With so little flour, the cake didn’t rise, and with so much sugar, it was heavy, dense and caramelized around the crust. Hoffman named his mistake “gooey butter cake.” People loved it, and a bakery star was born.

Catherine Neville is the publisher of Feast, a regional culinary publication headquartered in St. Louis. She’s also producer and host of the PBS show “tasteMAKERS.” For her, the key to gooey butter cake’s lasting popularity is its roots in home kitchens. “Anyone who grew up in St. Louis remembers eating this cake,” she told HuffPost.

She’s seen versions and “discoveries” of this cake from as far afield as Paula Deen and Bon Appetit magazine (which insists on tossing in an extra adjective and calling it “ooey gooey”), but Neville says the best GBC always offers a perfect balance of sweetness and texture. In what is most likely the only time in history that this cake will be compared to an iconic French dish, Neville said, “With that caramelized sugar on top, and the gooey part underneath, that textural difference makes it reminiscent of a perfect crème brûlée.”

Every St. Louis family with even rudimentary gustatory inclinations will claim to have a “secret family recipe” for gooey butter cake, but it often turns out to be a no-big-deal version made from a box of yellow cake mix and a brick of cream cheese. So yes, you may love Mee Maw’s handed-down recipe above all others, but really, you can do better than that. HuffPost talked to three of the city’s top GBC purveyors for tips on making an elevated home-baked version of this classic. 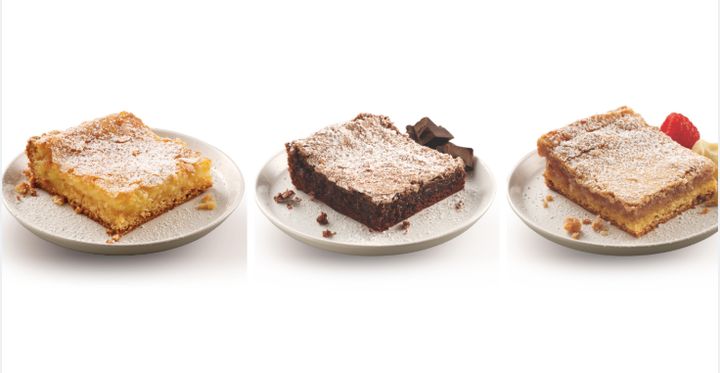 After years of being a strictly local indulgence, gooey butter cake has been gaining a national reputation, most notably when Iron Chef Michael Symon of “Food Feuds” declared Park Avenue Coffee to have the best GBC in town. The shop, which has five locations in St. Louis, is owned and operated by the brother-and-sister team of Dale and Marilyn Schotte. “We grew up in a large Catholic family, and for big events, everyone was commissioned to make a dish,” Dale Schotte told HuffPost. “Our mom always made the gooey butter cake, using her grandmother’s recipe.”

For the Schottes, the fun is in the flavors, and they offer a host of imaginative versions that rival Willy Wonka’s Chocolate Factory. They bake 73 varieties of gooey butter cake, including mom’s traditional, red velvet, butter pecan, chocolate chip cookie dough, turtle and Elvis (layered with Ghirardelli chocolate, peanut butter and banana filling). Seasonally, they offer specials like pumpkin caramel pecan, peppermint bark, eggnog and gingerbread.

“We have the top six sellers available at all locations every day, plus six seasonal flavors,” he said. “We bake 50,000 cakes a year, and we’ve shipped to all 50 states and around the world.” For those who want to re-create the GBC taste in their own kitchens, Park Avenue Coffee offers a bake-at-home mix in mom’s traditional, double chocolate and white chocolate raspberry versions.

There are two kinds of people in the world of gooey butter cake appreciation: Team Crust and Team Goo. If you’re goo-identifying, the most highly prized spot in the cake is smack-dab in the middle. To achieve that perfect texture, the cake should be slightly underbaked in the center.

“People will tell me they tried it at home and it didn’t work,” Schotte said. “There’s a fine line between done and underdone, so when you think it’s ready, don’t use a cake tester; just shake the pan around a little bit. It’s ready when the crust is firm but the center still jiggles. If the outer edges around the crust jiggle, it’s not done. And if the crusts are firm but the center doesn’t jiggle, it’s too late. You overbaked it.” 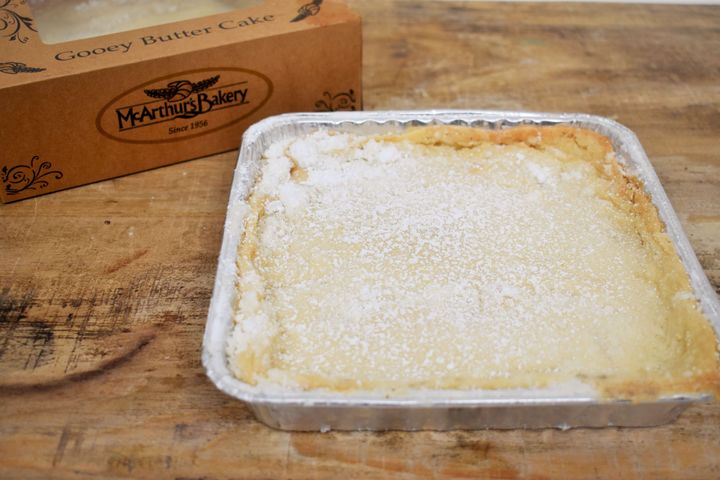 Scott Rinaberger is the owner of McArthur’s Bakery, which has been in business since 1956. “Each bakery in town takes a lot of pride in the uniqueness of its gooey butter cake,” he told HuffPost. “There are so many variations today that I see it as being similar to fried chicken. Like fried chicken, there is no such thing as bad gooey butter cake. You probably like the one that’s closest to what your mom used to make, but you really can’t go wrong, no matter what you choose.”

McArthur’s offers St. Louis’ south city classic and chocolate chip versions, in sizes from 8-inch squares to full sheets that can feed as many as 80 people. The bakery makes 175,000 gooey butter cakes each year, and the cakes are available both at the bakery and at local Aldi’s and Save A Lot grocery stores.

“Our gooey butter cake is a balance between being sweet and being overly sweet,” he said. “One thing I’ll tell you, we strongly believe in powdered sugar and in having lots of goo in the center. The way I see it, the cake is just there to hold the goo in place.” The base of their version is made with yeast. “Our base is more delicate, not nearly as firm, as some of the other kinds in town,” he said.

“What we do well is the classics. That’s what people expect out of the McArthur’s brand — getting a gooey butter cake like the one their grandparents enjoyed 60 years ago,” he added.

“The biggest mistake people make is putting too much batter in the pan,” Rinaberger says. “Then it rises too fast and gets too thick. Remember, it’s all about the goo.” 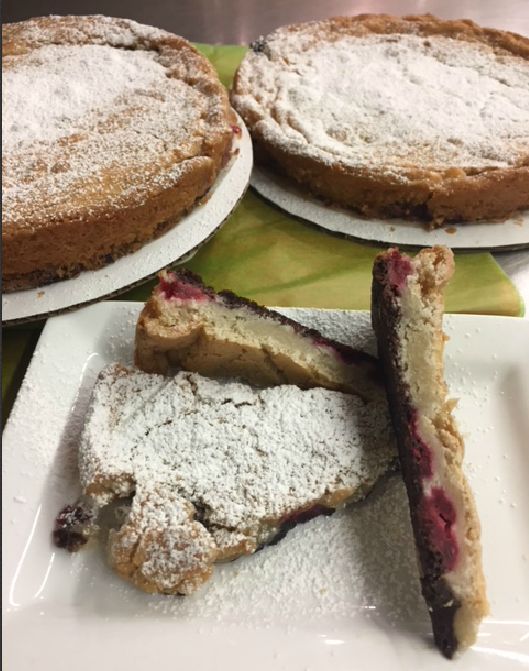 Native St. Louisan Tim Brennan owns Cravings Restaurant and Bakery, which is a two-time winner of a James Beard Award for Best Dessert in the Midwest and was named “One of 10 Best Places to have Dessert” by USA Today.

Brennan learned to love gooey butter cake when he was growing up in St. Louis’ Soulard neighborhood. When he was a child, a trip to Fresenberg’s Bakery (now closed) was a weekend treat for his family of eight kids.

“It’s a very sweet cake, and I’ve learned from my many years of running a bakery here that this city likes things on the sweet side,” Brennan told HuffPost. He’s especially drawn to the point-counterpoint of the cake’s crust and filling: “I love that contrast in consistency between the chewy crust and the creamy filling. The texture is what makes it so wonderful.”

Whenever gooey butter cake is on the menu at Cravings, the loyalists flock in, he reported. Although the dessert has a strong pull of nostalgia for those who grew up eating it, Brennan said it’s also gained a following from the younger set. “Lots of people who love it are way too young to remember the corner bakery version,” he said. “I have nieces and nephews in their 20s who really like it.”

Brennan has his own unique take on the gooey butter crust, sprinkling cake crumbs on the bottom of the pan before pouring in the batter (see recipe below). He often elevates the flavor by adding in a tart or bitter ingredient as a counterpoint to all that sweetness, and he suggested that home cooks try the same trick. “You might add chocolate and cherries, or strawberries and orange curd, just to make it more dynamic,” he said. “And please use only the best ingredients, especially real butter.”

What you drink to accompany that warm-from-the-oven slice is important, too. Brennan takes his GBC with a cup of very strong black coffee. “With all that sweetness from the cake, you’ll need it,” he said.

1. Preheat oven to 350 degrees Fahrenheit. Butter and lightly flour a 9-inch round cake pan. Add cake crumbs to the bottom of the pan; set aside.

3. Spread the gooey butter batter over the cake crumbs. Bake for 30 minutes until the top forms a crust. It may crack, and that’s OK. Cool for 5 to 8 minutes, then invert onto a cake plate and flip back to right-side-up. 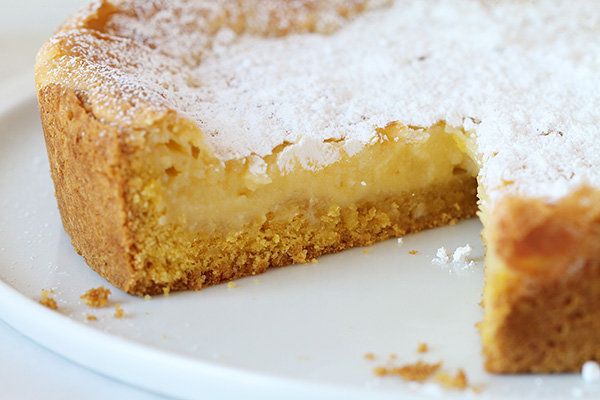