Baking a batch of brownies seems simple enough — that is, until they come out too cakey, underbaked or oily. Everybody has their own preferences, whether it’s crispy edges or a center piece, with or without walnuts, sponge-like versus fudgy. “Brooklyn Nine-Nine” star Chelsea Peretti has her own thoughts about brownies, and she recently shared on Twitter about her disdain for mushy brownies and crowdsourced tips.

Pastry chefs have their own definitions of what entails a perfect brownie, and we spoke to three of them to explain how they achieve their ideal brownie.

Emily Griffin, co-founder of the company Baker’s Edge, invented the Edge Brownie Pan in 2006 with her husband, Matt. The pan guarantees two chewy edges and a soft center to every brownie serving, which is her preferred way to eat brownies. “When I think about a brownie, I don’t want it to be light and fluffy, because it is too close to a cake, and I feel like the texture of a brownie helps define what it is,” she told HuffPost. 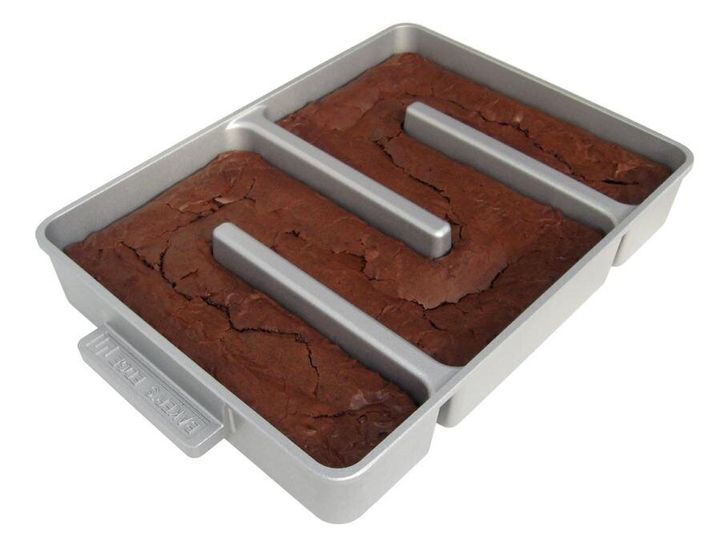 She doesn’t think making brownies from scratch is complicated, but she said first the baker needs to know what kind of brownie they desire. “The biggest issue is finding a recipe that makes what a person considers to be their favorite type of brownie,” she said. “One person might prefer a more cake-like brownie and the next a chewy, fudge brownie. Not all recipes are created equal.”

Baking times factor into how brownies turn out or don’t turn out, and you can use either a toothpick or knife to check the batter. “Ovens all can bake very differently,” Griffin said. “If you know your oven gets overly hot, you might want to drop the temperature in the recipe by 25 degrees and see how that does. A lot of people will overcook their brownies and end up with rock-hard edges instead of that well-desired chewy edge. My suggestion is to use a toothpick, and when you think your brownies are getting close, you insert the toothpick into the center. It should come out with moist-looking crumbs, not raw batter and not completely clean.”

Griffin’s favorite recipe is her own: Chef Emily’s Ultimate Brownies. She uses the common Baker’s unsweetened chocolate and no cocoa powder. “It took hundreds of tries to get a recipe that had the flavor and texture I wanted,” she said. “I typically find cocoa recipes end up with a more cakey brownie and don’t end up with that perfectly chewy edge and fudge middle.”

Rich And Chocolatey With Mix-ins 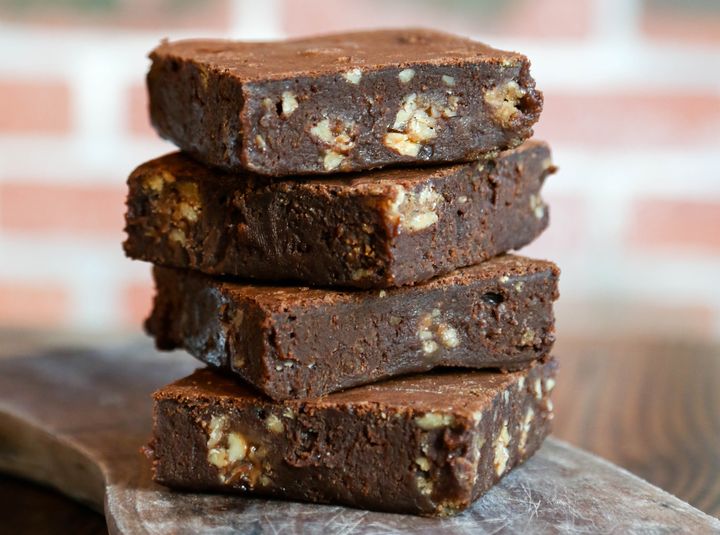 “We make a brownie that’s rich and super fudgy and fold in crushed pralines that we make,” she told HuffPost. “When they bake, the pralines kind of melt and create this really fun texture within the smoothness of the brownie.” This type of brownie aligns with her taste preferences. “For me, a really rich, really chocolaty brownie with something added for texture is my north star of metrics,” she said.

Fields said customers constantly rave about her cookies, but she thinks the brownie is her “secret weapon.” She said, “They’re just so unassuming, but they’re my favorite thing on the counter each day.”

While Fields suggested folks experiment with recipes until they find the one that suits their taste, she stressed that the chocolate is the most important part of the recipe. “If you don’t start with a delicious, quality chocolate, you can never end up with delicious, quality brownies,” she said. “I use Valrhona dark chocolate in mine.”

The Goldilocks Of Brownies

For James Beard Award-winning pastry chef and baker Joanne Chang of Boston’s Flour Bakery and Cafe, the perfect brownie falls somewhere in between Griffin’s and Fields’.

She likes “deep, rich pure chocolate flavor, not super sweet, not cake, but not fudge either,” and chewy edges and a shiny top. “When I want a brownie, I definitely do not want a fluffy, airy cake, nor do I want a dense candy-like fudge,” Chang said. “I want that hard-to-achieve spot right in the middle.” 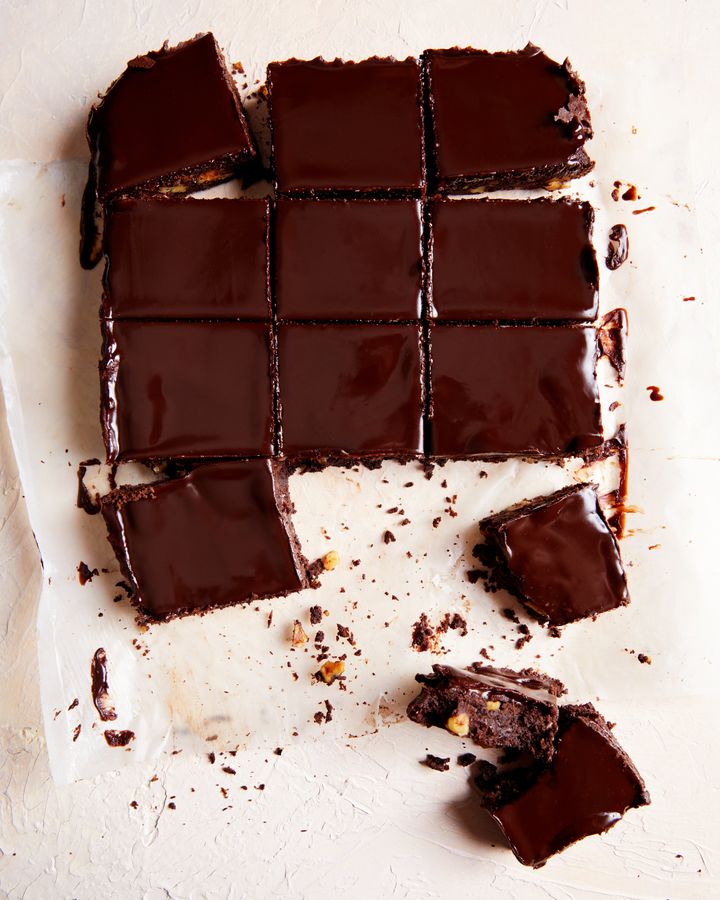 Like Fields, she uses a specialty chocolate: TCHO from the Bay Area. “[The type of chocolate you use] absolutely makes a difference,” she said. “With so few ingredients, every one [of them] is going to impact the overall end product.”

Flour sells only the TCHO brownies — described as “decadent” and made with a lot of chocolate and little flour — but in her upcoming cookbook, “Pastry Love: A Baker’s Journal of Favorite Recipes,” she has a recipe for a gluten-free chocolate ganache brownie. Chang recently integrated brown sugar and browned butter into one of her recipes, and she said “it is richer and deeper and much more chocolatey” than before.

Chang suggested baking brownies at 350 degrees Fahrenheit. “I test brownies by poking a paring knife straight into the center of the brownie, then leaning the knife forward a little and then removing the knife,” she told HuffPost. “If the crumb on the knife is liquid, the brownies need more time. If it comes out dry, the brownies have overbaked. I look for moist crumbs on the knife, then the brownie batter is cooked but not set-perfect.”

To Frost Or Not To Frost

Chang and Griffin typically prefer unfrosted brownies — Chang finds frosting to be “too much distraction” — and Fields’ praline brownies are naked, but only because they’re already so rich. However, Fields is Team Frosting.

“I think if something can be a vehicle for frosting, why shouldn’t it be?” she said. “I do have a very specific preference that brownies that are getting heated up and topped with ice cream for a sundae should absolutely have frosting. The textures that change when you’re eating it as the frosting goes from hot and gooey to cold under the ice cream is one of my favorite eating experiences.”

Chang and Griffin also like brownies a la mode. “I love the contrast of the warm brownie with the creamy, cold ice cream,” Griffin said.

In terms of avoiding oily or mushy brownies, Fields said to make sure you have the proper fat-to-flour ratio and that the ingredients are at room temperature when mixed, to aid emulsification. And for those who want to go crazy and add accoutrements like chocolate chips, nuts and/or caramel to their brownie mixture, Griffin is all for it. “I love the bite of a chocolate chip in my brownie,” she said. “I find that it gives a different texture with my brownie without actually altering the taste drastically,” unlike nuts, which she said change the taste of the brownie too much for her liking.

“The beauty of brownies, and pastry in general, is that once you have a brownie recipe you love and feel like you’ve mastered, you can then create so many variations by experimenting with new flavors in new ways,” Fields said.

Chang echoed a similar sentiment. “Adding inclusions is fine,” she said, “but to me, a great brownie really doesn’t need anything extra. But that doesn’t mean you shouldn’t do it. A great brownie is the one that you love the most.” 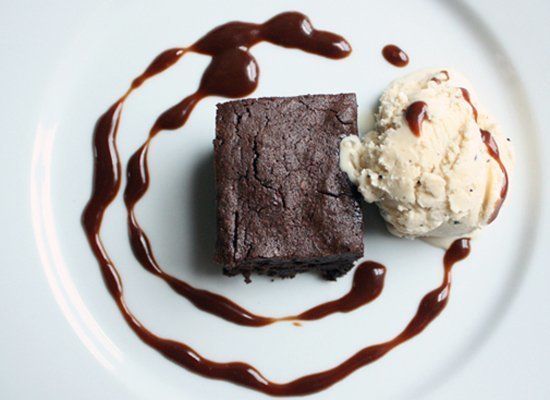