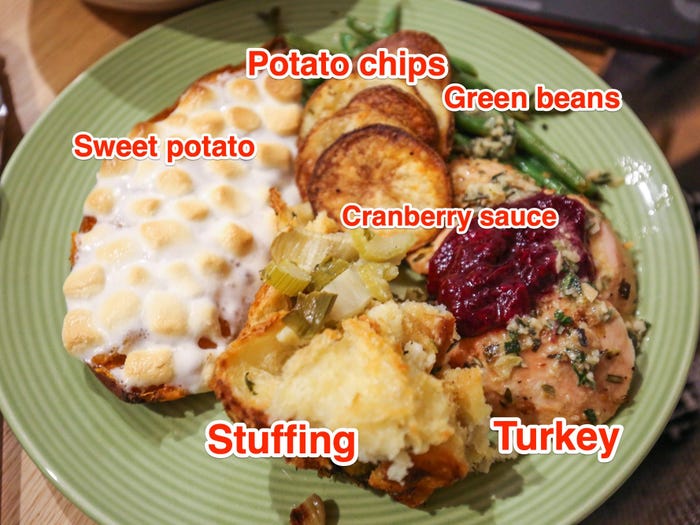 I've never made a full Thanksgiving dinner by myself. Knowing that this year will be many people's first time attempting the meal due to restrictions aimed at helping to prevent the spread of COVID-19, I wanted to give it a shot.

If your current quarantine pod consists of you and just one other person you live with, as mine does, then you may want to scale back on the food — making an entire turkey or a full-sized sweet potato casserole seems unnecessary and wasteful. Plus, you can only accommodate so many leftovers in a New York City apartment-sized freezer.

But that doesn't mean you can't still go all out in the kitchen cooking everything from scratch.

I thought of some foods that are on a typical Thanksgiving table — turkey, stuffing, cranberry sauce, vegetables, sweet potatoes, and mashed or baked potatoes — and came up with a miniaturized menu for myself and my roommate.

Instead of a whole turkey, or even a whole turkey breast, I made a one-pound piece of turkey breast. Rather than using the whole bag of cranberries for my sauce, I only used half. One sweet potato cut in half made two marshmallow-topped portions. I chose to make one green vegetable rather than a variety. And baked potato chips were a great alternative to having another soft potato on the plate.

The only dish I couldn't bring myself to downsize was stuffing. It's simply too good and makes amazing leftovers for the days after your meal. Speaking of leftovers, I believe they're the best part of any holiday meal. So even if you make a little too much of a couple of dishes, know that you'll be eating well the day after (and maybe even the day after that).

As all meals do, my Thanksgiving feast-for-two started with a trip to the grocery store. 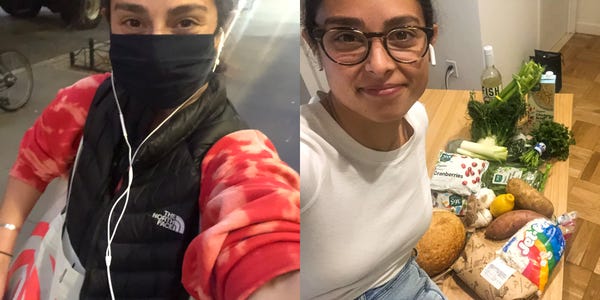 Having planned out my menu ahead of time, I grabbed my shopping list and went into the store with a game plan.

Since I was shopping for two, I was able to carry my entire Thanksgiving bounty home in just two shopping bags, which felt like a win already.

A total of six dishes made it to my Thanksgiving table, and the spread was still more than enough for the two of us. 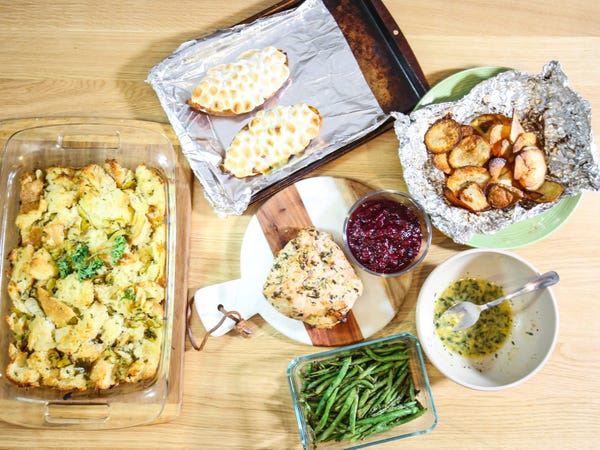 The only dish I made a family-sized portion of was the stuffing.

I made a full batch of stuffing because it's just as great for leftovers as it is fresh. 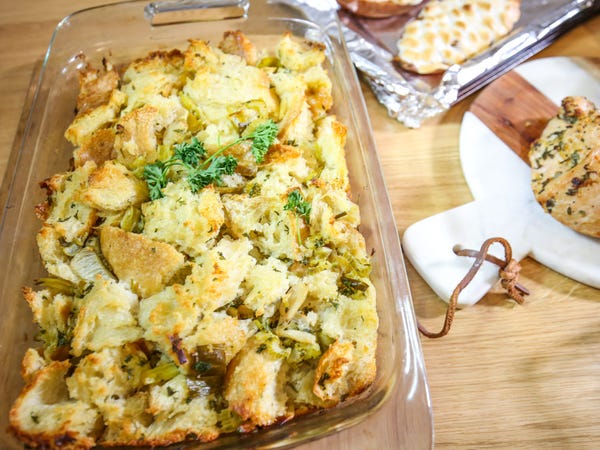 My roommate and I made it through one third of this stuffing on the first night. Then I had the rest for breakfast and lunch in the days following.

I had to start this dish the day before our Thanksgiving meal because the bread needed time to get stale. 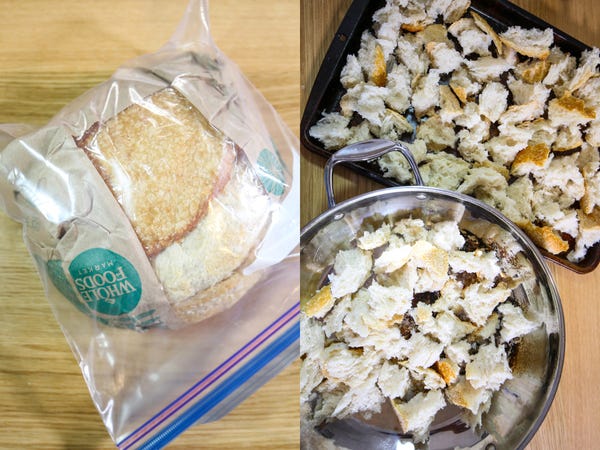 Last Thanksgiving, I used a recipe from The New York Times' Alison Roman that had even the biggest stuffing haters get up for a second helping. So naturally, I had to make the buttery stuffing with leeks and celery again.

I followed Roman's technique and used my day-before prep time to tear a loaf of sourdough by hand and spread the bite-sized pieces out onto pans. I left the pans on a shelving unit overnight to harden and become stale. (Stale bread holds its integrity better in a wet stuffing whereas fresh bread would turn soggy.)

If I were cooking for 10 people, I would have needed a bigger or second loaf of bread.

Each of us got our own sweet potato half. 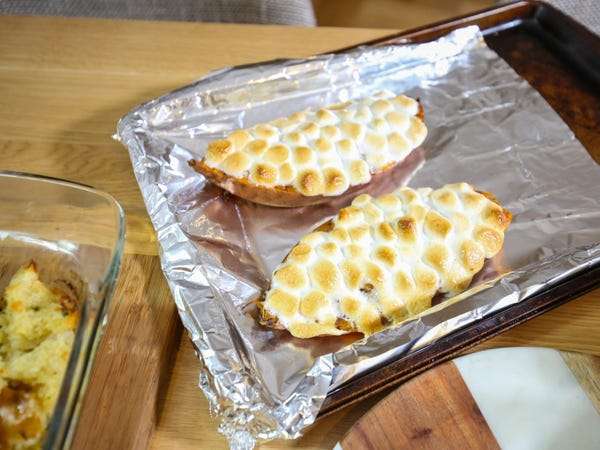 I kept things simple here and made a roasted sweet potato with cinnamon and marshmallows baked on top.

Rather than making an entire casserole, I used the potato skins as a natural serving container and simply made two servings out of one potato.

Sweet potatoes take a long time to bake, so I put mine in the oven early in the day. 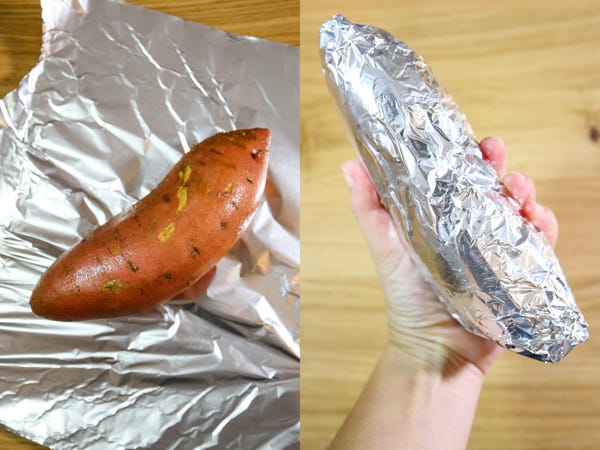 I started cooking on meal day by roasting the single, medium-sized sweet potato. After washing the skin, I wrapped it in foil and placed it in a 350-degree oven, checking on it every 20 minutes until it felt soft to the touch.

Baking potatoes can take a long time and I was glad I only had one to make.

I assembled the potato halves just before we were ready to eat. 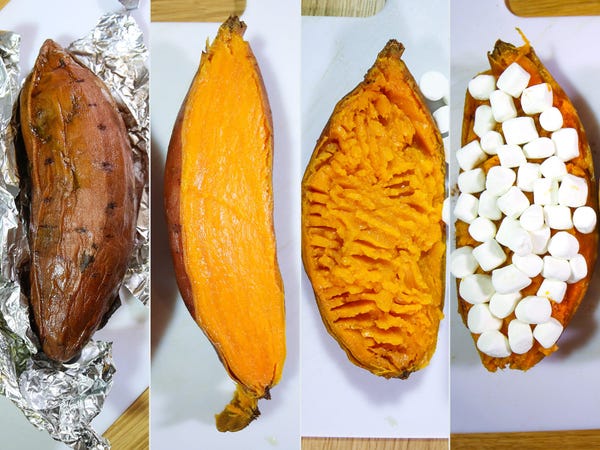 I let my baked sweet potato cool on the counter until around 15 minutes before we were ready to eat dinner.

Cutting it in half length-wise, I used a fork to mash up the insides, taking care not to tear the skin. Then I sprinkled each half with cinnamon and covered every inch of the surface with miniature marshmallows.

Just five more minutes in a 350-degree oven and the marshmallows were melted and ready to serve.

I also made baked potato chips using one russet potato. 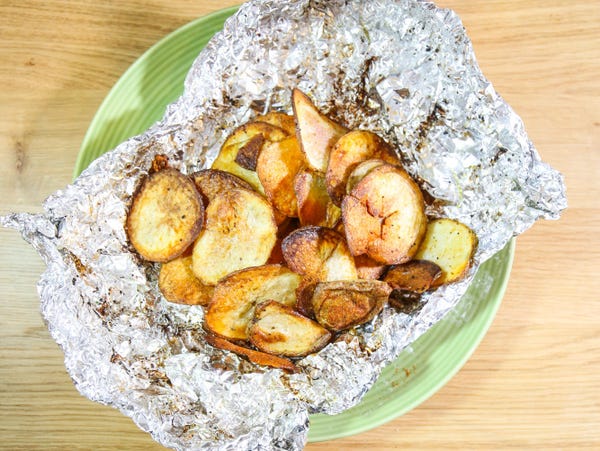 I make potato chips quite often on my own, and I can typically eat most of the batch myself. So I used a single russet potato to make chips for the two of us.

Even though I used one medium-sized potato, we still had some chips leftover — probably because we had so many other dishes to eat.

These chips also take a little while in the oven, but I put them in at the same time as the turkey. 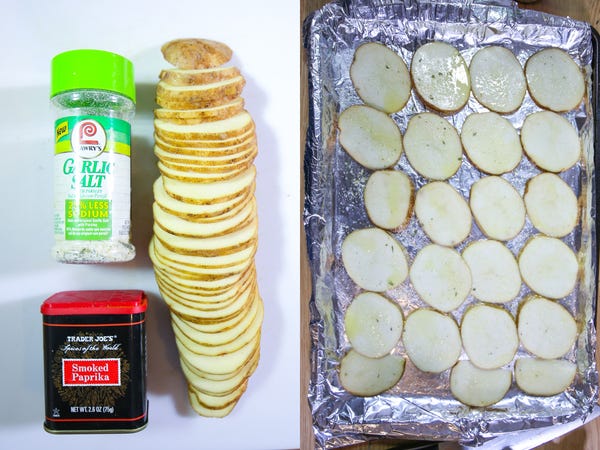 Using a chef's knife to cut my lone russet potato into disks roughly 1/4-inch thick, I lined a baking sheet with foil, rubbed it with olive oil, and prepped the chips for the oven.

I typically keep it simple with salt, pepper, and paprika as my chip seasonings, but I'd recommend pulling flavors from other parts of your meal as well. For this batch, I used garlic salt because my stuffing, green beans, and turkey were all garlicky.

If you're cooking the chips on their own, set the temperature to 400 degrees. In this scenario, they had to share the oven with my turkey, which was cooking at 350 degrees. They took a little longer than normal to get crispy but I had the time.

The thinner you cut the potatoes, the more crunchy the chips will be. 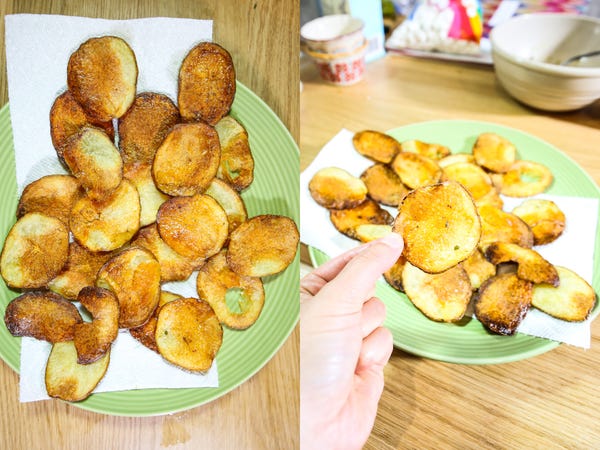 Keep an eye on your potato chips, especially if you cut them thin. Once they reach the point of cooking through, they go from white to yellow to brown very quickly.

I let the baked chips drain on a paper towel, then wrapped them in foil to keep warm until I was ready to serve them.

Determined to keep turkey on the table, I asked the butcher to cut me a one-pound piece of turkey breast. 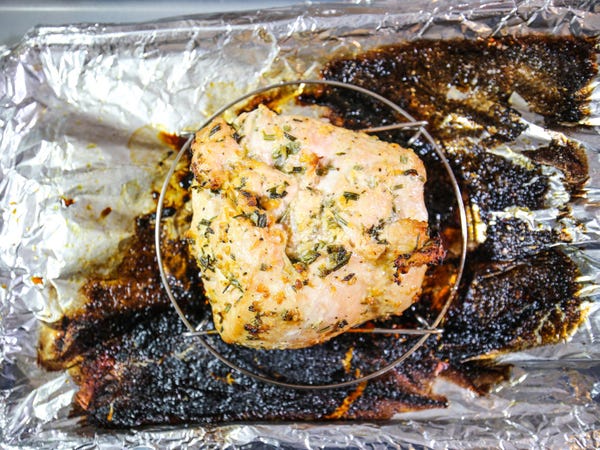 In my first attempt at cooking turkey at all, I turned to Ina Garten for a little recipe help. The "Barefoot Contessa" star had a recipe for a whole, bone-in, 7-pound turkey breast.

Seven pounds would be way too much for me and my roommate, so I bought a one-pound piece of turkey breast without the bone.

I made the full amount of Garten's turkey rub from the recipe and used the leftovers to flavor my green beans. 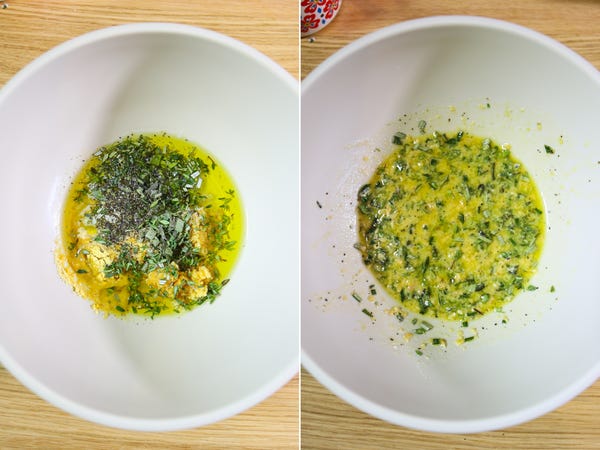 Looking at Garten's recipe, I saw the wet rub was a lemony, garlicky, herby oasis, which I knew would taste wonderful incorporated in other parts of the meal as well.

So I made the full amount and used a few spoonfuls to rub into my turkey.

I reserved some as a sauce to place on the table, and cooked my green beans in the rest.

I love having a green veggie on the table, so I used a single 12-ounce bag of trimmed green beans. 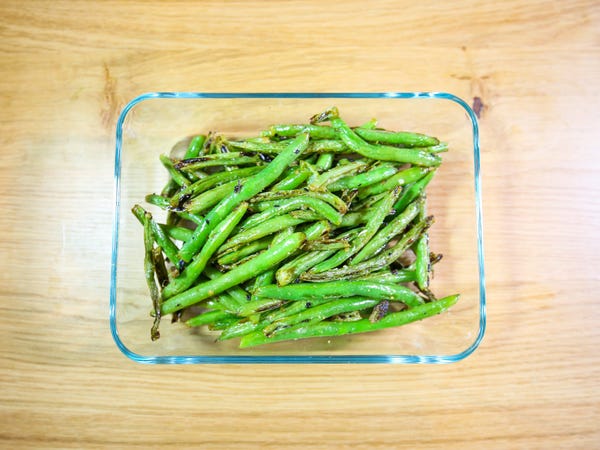 The smallest bag of green beans I found at the store was 12 ounces. It made just enough for two people with only a small portion leftover.

I let the beans fry in the wet turkey rub while I worked on other dishes. 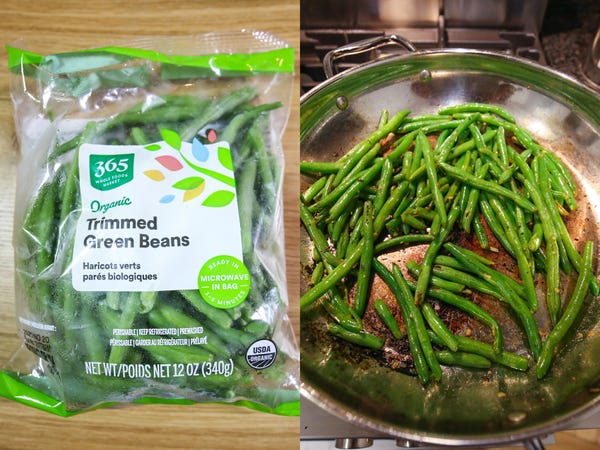 I cut open the green bean bag and dumped them into a lightly-oiled pan. Then I spooned the wet rub onto the beans and cooked it down until they were bright and snappy, which took around 12 minutes over medium-high heat.

Of course, I also made cranberry sauce. 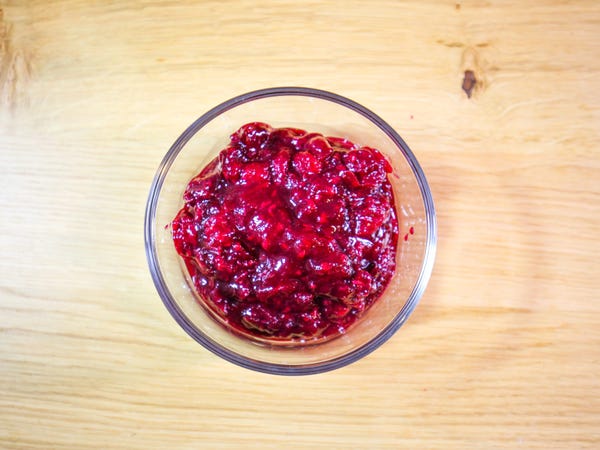 Cranberry sauce surpasses even the buttery stuffing as my favorite thing on the entire table. My mom usually makes it fancy with fruits and nuts mixed in, but I kept it relatively simple for this downsized version. 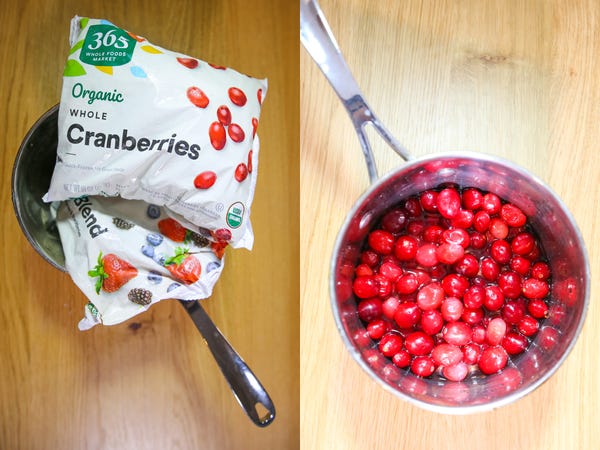 I knew that cranberry sauce would reheat well the next day, so I chose to make it ahead of time to get one full dish out of the way.

I grew up on canned cranberry sauce and I honestly love that stuff. But I wanted to pull out all the stops for this Thanksgiving feast — plus I've been loving making marmalades and jams this year — so I chose to make the sauce entirely from scratch.

I put half the cranberries from the bag into a 4-quart pot and poured in just enough water to cover them, along with a few spoonfuls of sugar. Then I brought it to a low boil over medium-high heat.

I made a little bit more than enough for two because I knew I'd want leftovers. 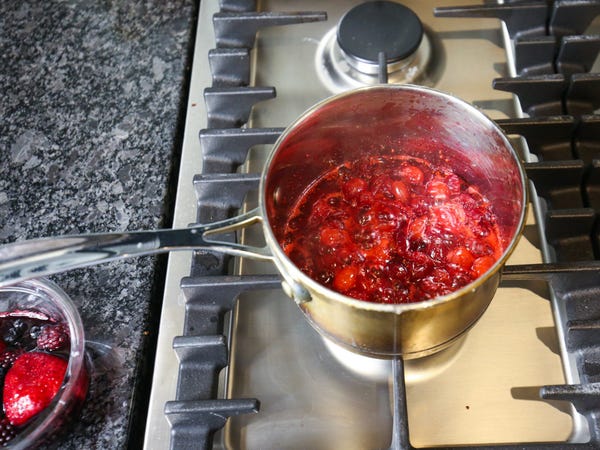 Defrosting half of the mixed berries in the microwave, I poured them into the pot and turned the heat down to low, letting the combined fruits simmer together until it reached the consistency I wanted — somewhere between runny and jammy. (The sauce will thicken more as you let it cool.)

The cook time here will vary depending on the size of your pot, how powerful your burner is, and how many cranberries you're cooking. Rather than set a timer, let the sauce simmer and keep an eye on it, stirring occasionally with a spatula to keep it loose. It's done whenever you like the look and taste.

Even though I made more cranberry sauce than the two of us needed, I still had half the bag of mixed berries and half the bag of cranberries left to store in the freezer for something else.

Even with my downsized recipes, we still had plenty of leftovers. But I'd argue that leftovers are the best part of this festive meal anyway! 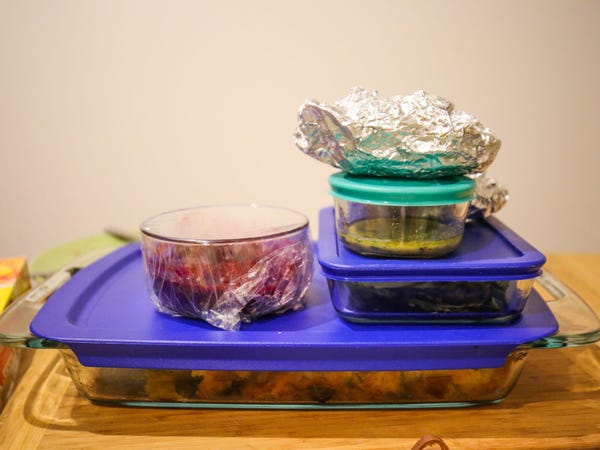 I think the proper amount of leftovers — not more than you can reasonably eat before it goes bad — is a sign of a successfully downsized Thanksgiving meal. I was able to prepare a main dish (the turkey breast) and five sides while producing minimal waste and maximum flavor variety.

Make no mistake: Cooking for two (or even for one) doesn't mean you have to compromise on your efforts in the kitchen. Especially if you love to cook or are trying to learn to love it.