If America runs on Dunkin', Canada runs on Tim Hortons.

Much like Dunkin', Tim Hortons is a casual, counter-service spot for coffee, breakfast sandwiches, and pastries that can be found on almost every corner in Canada — with almost 5,000 locations, it's Canada's largest restaurant chain  and claims to serve almost eight of every 10 cups of coffee sold in the country.

On a recent trip to Quebec City, I had to see for myself why Timmy's (as it's affectionately called by Canadians) is so synonymous with Canada — as well as how it stacks up to its US counterpart.

In terms of décor, I found Tim Hortons and Dunkin' to be incredibly similar. 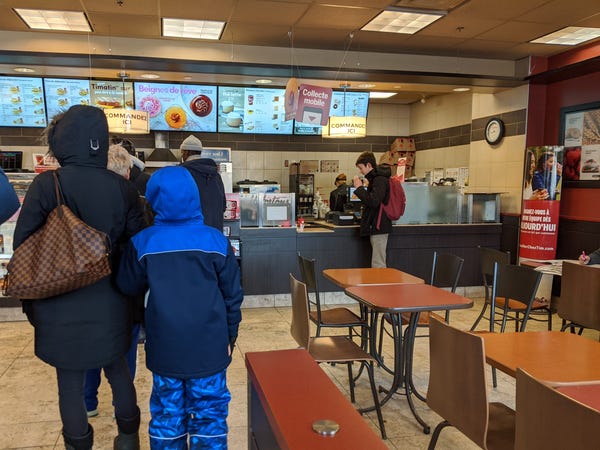 Both are counter-service spots, and have a primarily beige and orange color scheme with lots of ads on the walls. Neither particularly screams "stay a while," in my opinion.

I ordered an iced coffee with milk, black hot coffee, English muffin breakfast sandwich, and hash brown at each. 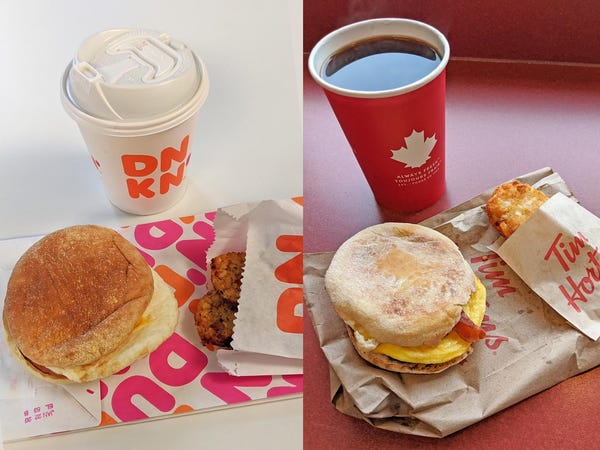 The iced coffee at Tim Hortons was $1.27 ($1.69 CAD). At the Dunkin' I visited, it cost $2.99. It's worth noting that fast-food prices can vary depending on your location, so they may be different in your area.

Tim Hortons' iced coffee was absolutely delicious, but not at all what I expected. It was incredibly sweet and tasted more like a Frappuccino than a regular iced coffee. 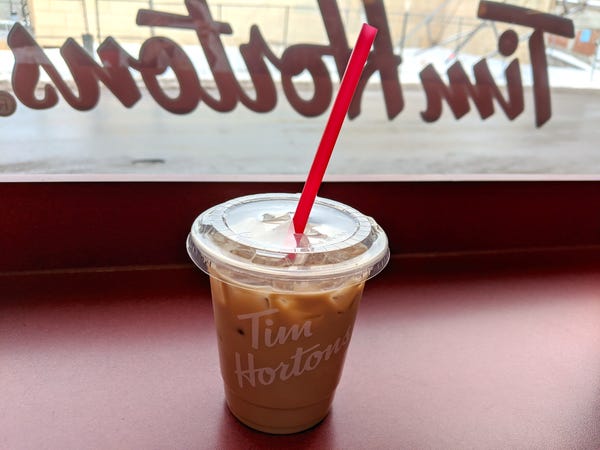 No one asked me what kind of milk or sweetener I wanted: I assumed I would add those in myself, but it came pre-mixed.

The iced coffee at Timmy's was so sweet and rich that I wondered whether it had actual ice cream in it, like iced coffees in Europe (I was in French Canada after all). But I suspect they just put in cream and sugar, which I'm not used to since I tend to drink my coffee with only a splash of whole milk.

The hot coffee at Tim Hortons was super hot when it came out. Once it cooled, it was easy to drink: not too strong, smooth, maybe a touch watery. A solid cup, but nothing to write home about. 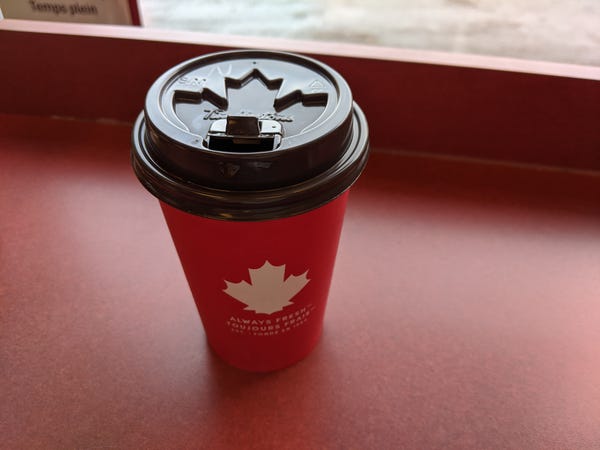 While the coffee was a little watery for my taste, it also lacked the acidity and slightly burnt flavor that I find other fast-food coffee often has — and which I don't like. It was a non-offensive simple cup of coffee that I was easily able to drink black, even though I usually prefer to add milk.

The hash brown was good: crispy on the outside, and soft on the inside. 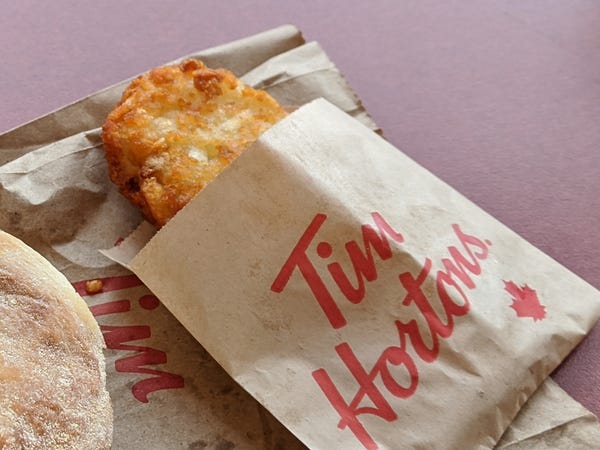 My only quibble is that I would have liked it to have a little more salt. While I usually find the sodium content in fast-food is through the roof, this hash brown could have used a touch more seasoning, in my opinion.

The English muffin with egg, cheese, and bacon did not have a lot of meat, unfortunately, but it was still good on the whole. 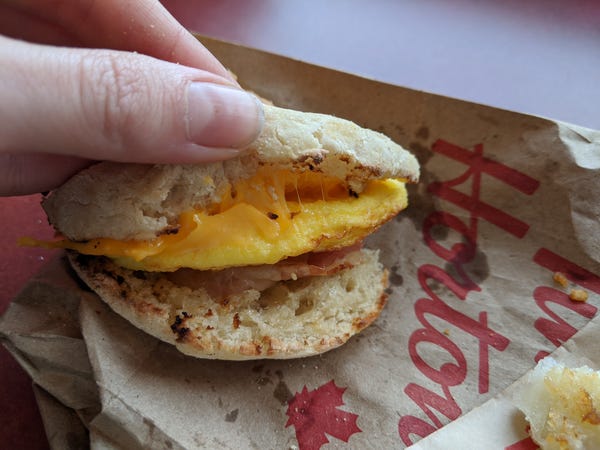 This was a solid breakfast sandwich — the cheese was thick and gooey, the bread toasted perfectly, and the egg soft and fluffy — though I would have preferred a little more bacon, and the lone strip that was included in my meal could have been crispier.

The iced coffee at Dunkin' was a lot more like the iced coffee I am used to: slightly bitter, but unobtrusive enough to be easy to drink. 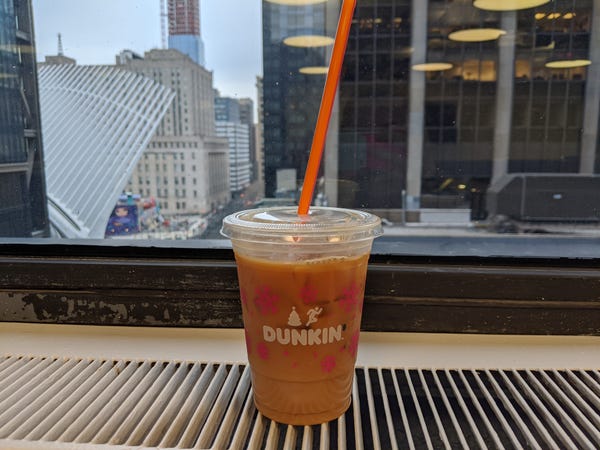 Unlike at Tim Hortons, I was asked whether I wanted cream and sugar, which I declined in lieu of a splash of whole milk.

I found the regular coffee at Dunkin' was very similar to that at Tim Hortons. It was mild, smooth, and unremarkable — but in a good way. 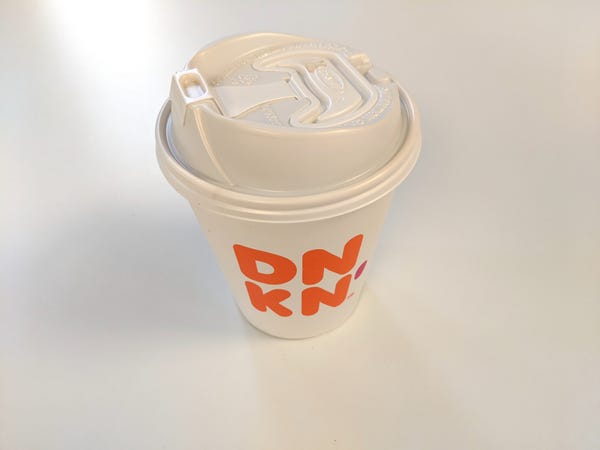 It was also unobtrusive and watery enough for me to be able to drink black, and didn't have any hint of the acidity or bitterness often found in fast-food coffee.

Instead of the single hash brown I was expecting, my Dunkin' order came with six little ones. While less crispy than the hash brown at Tim Hortons, these were better seasoned, in my opinion. 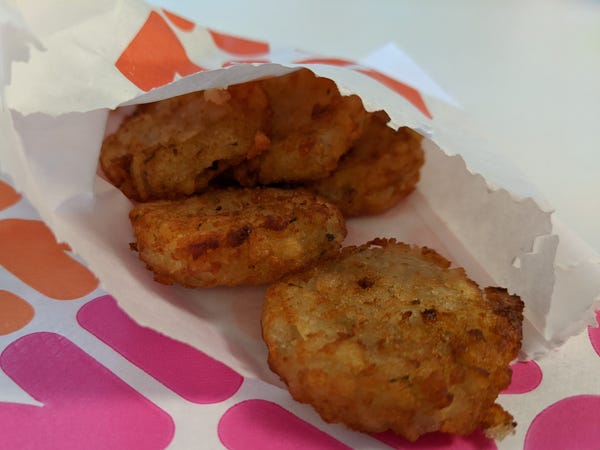 While they were a little softer than I would have liked, they were seasoned much better, and had a herby taste I couldn't place until I looked up the ingredients later: garlic powder and dehydrated parsley.

I got a ham, egg, and cheese English muffin breakfast sandwich at Dunkin', as the fast-food chain doesn't have a bacon version on its menu. While the egg was really good, the bread was way too squishy for my liking. 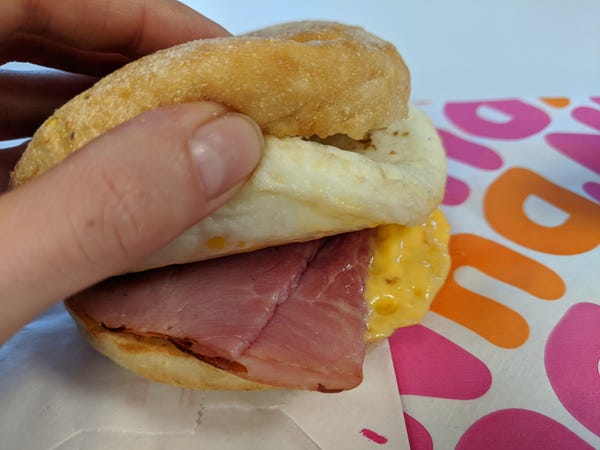 The muffin was way too flappy and soggy for me. While the ham was good — and there was a generous portion — I personally prefer bacon.

The egg, however, was delicious. It was fluffy and light, and quite thick. While Tim Hortons' egg was more like scrambled eggs in disc form, this one was a fried egg in disc form.

The cheese didn't taste like much to me, however; it had a pale orange color and the consistency of spray cheese, in my opinion. Tim Hortons' cheese looked and tasted more like real cheese to me.

Overall, I found the food at Tim Hortons had a slight edge over Dunkin'. It just felt a little fresher and more natural to me, while the muffin and cheese, in particular, stood out as better. 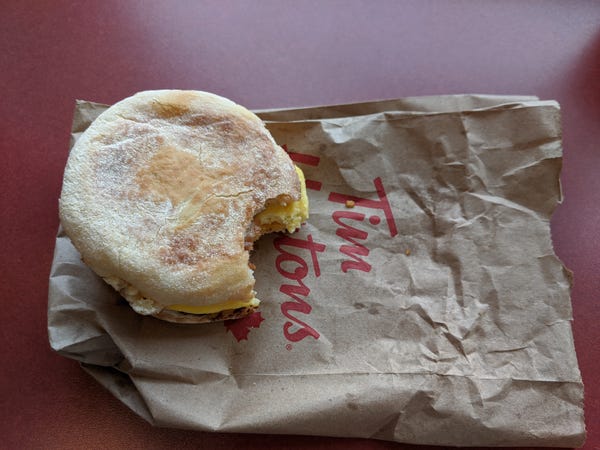 As for the coffee, it's a tie. Both chains offer a solid and easily drinkable, if unremarkable, cup. 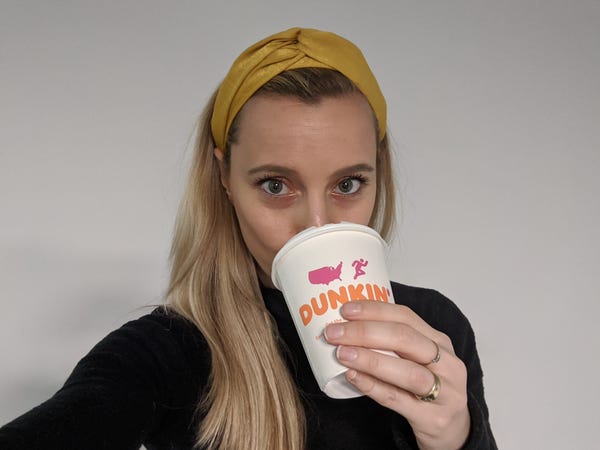 If push came to shove, I'd pick Dunkin' for coffee, because it was maybe a smidge stronger and less sweet, though many people prefer their coffee on the milder and sweeter side.

Generally speaking, I think Tim Hortons offers way more bang for your buck, though, as it was significantly cheaper than my Dunkin' order.