People who drink steaming hot coffee in blistering, humid summer weather with sweat rolling down their backs should understand that there’s a better way to get their java fix: cold brew coffee.

Cold brew has successfully made the jump from third-wave coffee shops to the aisles of your local grocery and convenience stores. Here’s the best new stuff from brands like Trader Joe’s, La Colombe and Chameleon: 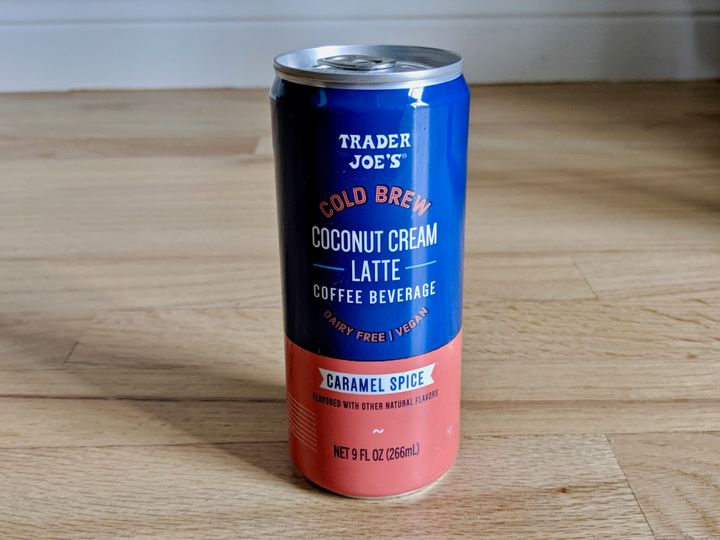 Let’s focus on the more unique of the two offerings: the caramel spice. Caramel flavoring is consumed year-round, but I often associate it with the holidays when it’s in coffee (see: Starbucks’ caramel brulee latte). That said, I love caramel’s integration into this dairy-free offering. If you’re concerned about it tasting overly coconut-y, don’t be. The creaminess from the coconut, the coffee flavors and the caramel notes all work together. It’s not sugar-free (there are 10 grams), but it’s a stellar option for anyone looking for a dairy-free, ready-to-drink coffee option. 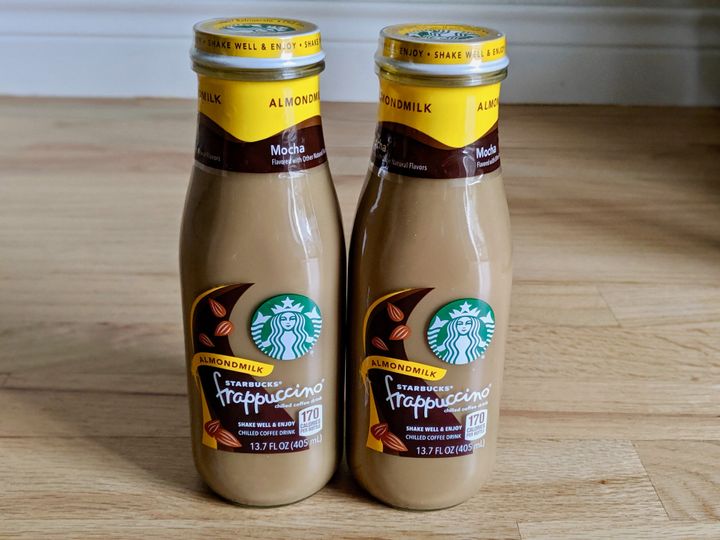 The mermaid-fronted brand has not been shy about integrating almond milk into its in-store drinks, but it’s only now begun to show up in the branded Starbucks beverages on shelves in supermarkets. Starbucks almond milk Frappuccinos are now available in two flavors: mocha and vanilla. The mocha is the standout, as it does a better job of covering up almond milk’s, uh, let’s say, distinctive aftertaste. It’s another solid option for the lactose-intolerant/plant-based coffee lovers who want a quick, creamy coffee drink to pull out of the fridge. One thing to keep in mind if you’re watching your sugar intake: The Frapp has 25 grams per bottle. 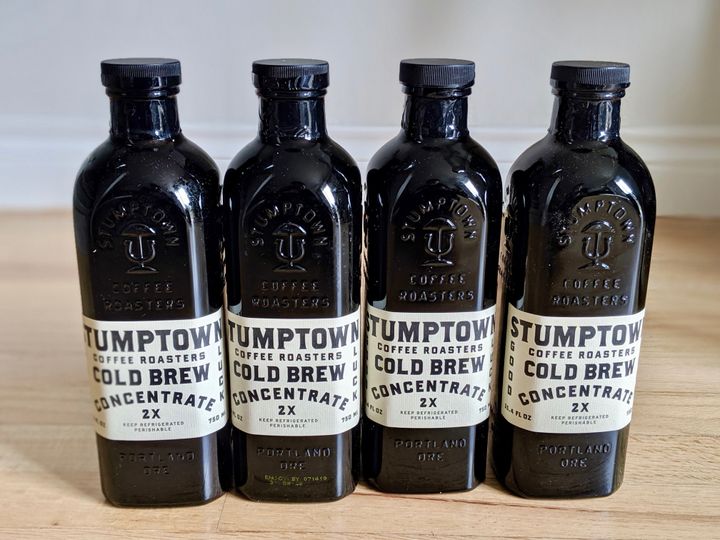 The OG third-wave Portland-based coffee brand was one of the first to go national with delicious, ready-to-drink cold brew (the dairy-free, vegan coconut is still one of my all-time favorites), but strangely has never released a cold brew concentrate.

If you’re unfamiliar, a concentrate is a more cost-effective way to get buzzed, as it will always cost less than buying a single-serve can or bottle. This concentrate looks like a bottle of whiskey, but inside is pure rocket fuel ― it’s double the strength of their original cold brew and meant to be diluted with water. I enjoyed it with the new oat milk from Rise Brewing Co., another great coffee producer. 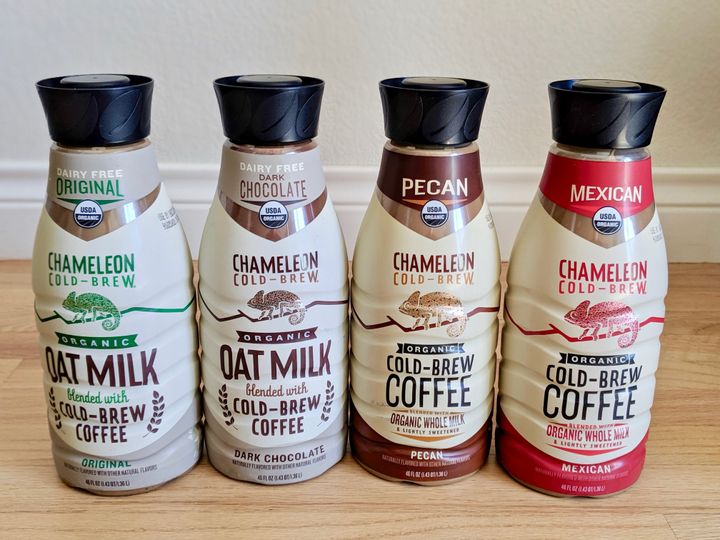 If you’ve rolled a shopping cart by a Whole Foods refrigerated case in the last couple years, you’ve probably noticed the distinctive glass bottles of Chameleon coffee. All of the brand’s offerings ― from its cold-brew concentrates to the ready-to-drink bottles ― include organic coffee, a feature that isn’t as common as you might hope. The new, distinctive bottles (with their equally distinctive enormous caps) house new coffees for you to gulp down as the weather heats up.

Two of these new coffees are infused with oat milk in plain and dark chocolate flavors. Both are creamy and delicious, but if you crave coffee flavors, the dark chocolate doesn’t quite deliver. Instead, it might behoove you to buy oat milk and pour it into Chameleon’s long-running, sugar-free mocha concentrate.

Those two non-dairy coffees are joined by a pair of extremely dairy-filled bottles: pecan and Mexican coffee, made with organic whole milk and a touch of sugar. Both are worth trying, though the pleasant cinnamon notes of the Mexican java stand out, calling to mind a worthy take on horchata. 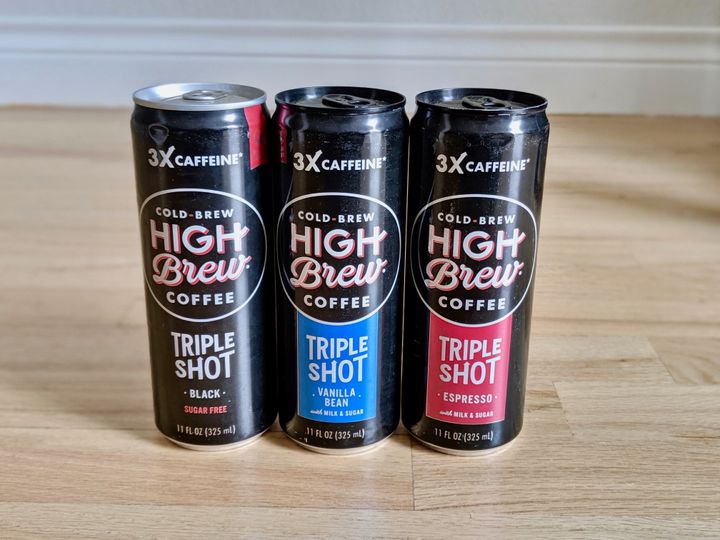 If you like your cold brew without a lot of sugary bells and whistles, and with more than enough caffeine to power you through an afternoon slump, High Brew’s three new Triple Shot coffees (with 220 mg of caffeine per can) are going to be right up your alley.

The first I tried, the Triple Shot black sugar-free, woke me up just by sticking my nose in it. It’s unashamedly rocket fuel-like, but like a lot of the best cold brews, it goes down smooth. The Triple Shot vanilla bean does have 20 grams of sugar, but unlike other coffee drinks I’ve come across, the vanilla flavoring doesn’t taste artificial. The Triple Shot espresso was my favorite of the bunch, with just 10 grams of sugar, a ton of caffeine and a touch of milk to add body and creaminess to the coffee. 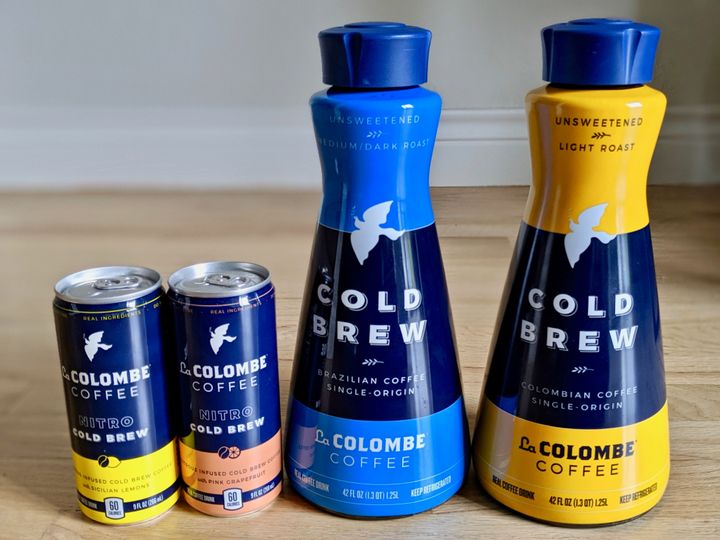 Fun fact: As of 2015, the Philadelphia-founded coffee roaster is majority-owned by the CEO of Chobani. His influence (and financial investment) has appeared to push the brand to experiment with new coffee products I haven’t seen elsewhere. For example, I loved the two new 42-ounce single-origin coffee bottles filled with coffee from Brazilian and Colombian beans. The Brazilian is a medium/dark roast, the Colombian a light roast, and both provide a fantastic base for milk and sugar added to your taste (or sparkling water, like in this recipe).

Single-origin coffees are still fairly rare in cold brew form (though Tennessee’s Cadence Cold Brew has a delicious offering from Ethiopia), but this appears to be something you’ll likely see more of in the market.

La Colombe isn’t afraid to experiment with the coffee shandy, as evidenced by its completely bonkers new shandy lemonade and shandy grapefruit cans. The lemonade is made using Sicilian lemons, and will absolutely make you pucker up a bit, but has such a beautiful, sweet, creamy coffee finish that it’s tough to pass up. This is a perfect, refreshing pick-me-up in the afternoon. 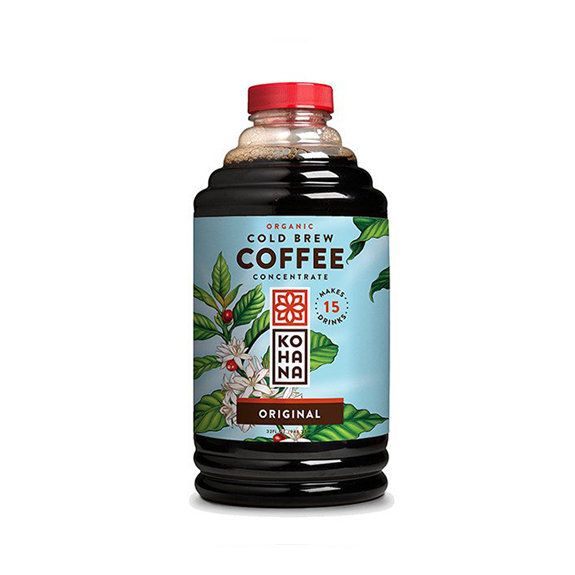