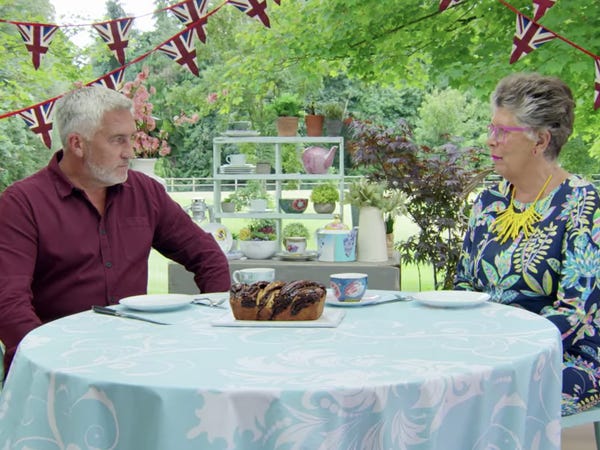 The latest episode of "The Great British Baking Show" — also known as "Bake Off" — has riled up more than a few viewers after Prue Leith praised fellow judge Paul Hollywood's version of babka over one she had eaten in New York City.

During the technical challenge for chocolate week, contestants of the popular British baking show were asked to make babka, a sweet, braided bread that typically contains dark chocolate and is deeply ingrained in Jewish culture.

While the amateur bakers worked on making the treat, Leith and Hollywood sat at a table with a loaf of babka in front of them.

"It's lovely, it's much lighter than I thought it would be," Leith said, after taking a bite. "I have had it in New York and it's not nearly as nice as this."

While babka is said to have originated from eastern or central Europe — where exactly is debated with theories ranging from Ukraine to Italy, though Poland is widely credited with inventing the dessert, according to The Nosher's Joanna O'Leary — it's especially popular in New York City.

Some Twitter users suggested that Leith likely hadn't had the babka at one of the city's most popular spots for the treat, Breads Bakery.

The owner of Breads Bakery, which is said to make New York City's best babka, wants Prue Leith to visit

In 2016, Grub Street gave Breads Bakery the top spot in a list of "the absolute best babka in New York City."

Breads Bakery owner Gadi Peleg told Insider through a spokesperson that he is "thrilled to see the overwhelming reaction from fans of Breads Bakery's babka."

"It is nice to see that people have such an emotional response to her comments and many seem to be personally offended," he added, speaking of Leith's preference for Hollywood's version of babka over the one she had tried in New York.

"Of course New York has great babka," he continued. "Babka has become part of the culinary language of New York City. The babka, like the city itself, has never been better."

Peleg hopes that Leith will pay Breads Bakery a visit in the future so she can "taste Breads Bakery's babka, right out of the oven, as they come out all day, every day."

A loaf of babka, made either with chocolate or cinnamon, costs about $15 at Breads Bakery located in Manhattan's Union Square.

Adir Michaeli, a Breads Bakery alum who now runs his own bakery that's also popular for its chocolate babka, told Insider that "there are many different styles of babkas," adding that he "respect[s] everyone with his/her own taste and preference."

A chocolate babka at Michaeli Bakery, located on Manhattan's Lower East Side, costs $12.

As Ari Weinzweig, the co-founder of gourmet food business Zingerman's, wrote in a 2009 article on The Atlantic entitled "Babka, Transatlantic Jewish Delight," the baked good has been modified over the years. Weinzweig wrote:

"Today, babka is a sweet loaf, akin to a light textured coffee cake, or a bit denser piece of panettone. It starts with a rich, slow-rise dough made with lots of butter, real vanilla, fresh egg yolks, orange and lemon zest, sugar and sea salt. The dough is rolled around an almond frangipane (made from almonds, almond flour, more vanilla, butter, sugar and eggs), then brushed with dark chocolate and sprinkled with rum-soaked Red Flame raisins, sultanas, and a really splendid cinnamon sugar. It's finished off with that nice, buttery-crumbly, comforting (to me at least) streusel topping."

Weinzweig also wrote that "chocolate babka seems to have been a mid-century American Jewish invention," and noted that the dessert was likely historically made with other sweet ingredients like sugar, honey, and dried fruit.

And although the origin of the sweet bread continues to be the subject of debate, as O'Leary wrote in The Nosher, babka "became a staple ware in Jewish bakeries" in the US after immigrants from central Europe brought the recipe to America in the 19th century.

Representatives for Netflix did not immediately respond to Insider's request for comment.