Swiss rolls are so old news.

TikTokers are putting a modern, cookie-flavored spin on the rolled dessert with “Oreo Sushi,” a DIY food trend that’s rising in popularity on the video-sharing app.

Dozens of TikTok users have shared videos of themselves turning Nabisco’s famous crème-filled cookies into tube-shaped cakes, which have racked up more than 10.3 million views combined under the app’s Oreo Sushi hashtag. 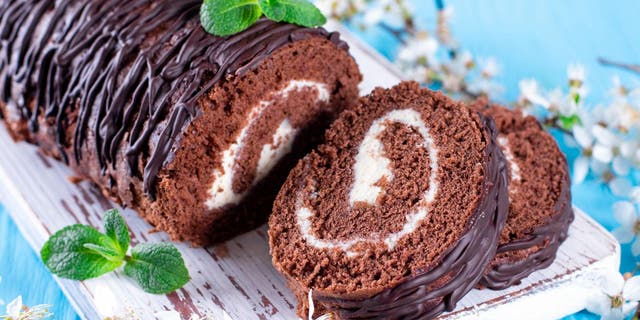 A Swiss roll is typically made from a cream- or jelly-covered sheet cake that’s been rolled into the shape of a log. The two layers create a swirling design within the dessert’s interior. (iStock)

The first Oreo Sushi video to hit TikTok came straight from the popular TikTok page Cheese or Desserts  on Jan. 21.

In celebration of surpassing 1 million followers, the two-person team shared their Oreo Sushi recipe. The short tutorial showed TikTokers they only need Oreos and condensed milk to make a black and white sushi cake.

To make the dish, first home chefs have to separate each cookie’s wafer shell from its crème center. When the cookies are separated, the wafers should be crushed and mixed with three tablespoons of condensed milk, according to the TikTok video.

The wafer mixture can then be flattened with a rolling pin over a sheet of plastic or a specialized sushi rolling mat. Cheese or Desserts also adds one tablespoon of condensed milk to the separated crème. After the milk and crème are adequately mixed, the spread can be distributed evenly on the crushed wafer layer.

Last but not least, Cheese or Desserts rolled the two layers together and cut it into pieces, so the dessert can resemble a sliced sushi roll.

Cheese or Desserts did not immediately respond to Fox News’ request for comment.

In the last five months, this viral video has generated more than 455,800 views and 99,500 likes. It has also inspired several other TikTok chefs to test out or put their own spin on Oreo Sushi.

Some creators have opted to use regular or dairy-free milk to mix with their cookies. Others have made Oreo Sushi by swapping out traditional Oreos for one of the brand’s other flavors.

Meanwhile, commenters who dislike the crème filling have suggested alternatives such as cream cheese, melted down marshmallows or a ready-made marshmallow spread under several Oreo Sushi videos.

What flavor next? 🍣 You can’t say you like creativity if you aren’t following me🤷‍♂️ #fyp #oreosushi #food #foodie

So far, the most-liked Oreo Sushi video on TikTok comes from a 14-year-old baking enthusiast named Sienna Sweets, who has received more than 655,400 likes in the last week for her two-ingredient recipe and chocolate dipping sauce.

In the last year, Oreo Sushi is a search term that has spiked sporadically on Google, according to data on Google Trends. Interest in the no-bake dessert trend peaked in mid-December and mid- to late-April, and has done so again on Wednesday, June 2.