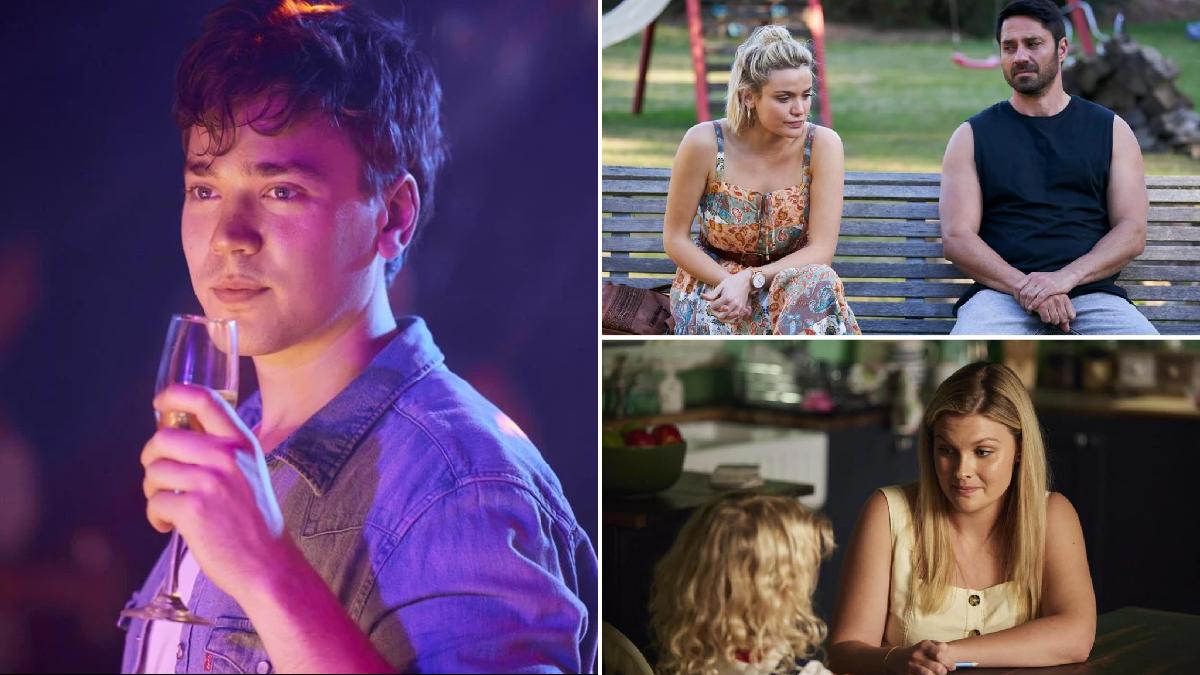 This week in Home and Away, Chloe’s (Sam Barrett) plans to give Ryder (Lukas Radovich) a nice birthday surprise backfire after Theo (Matt Evans) terrifies him by kidnapping him to get him to the club.

When Ryder sees how close Chloe and Theo are getting, he deals with his feelings by turning to booze and flirting with other girls, much to Chloe’s disgust…

Meanwhile, Logan (Harley Bonner) has been dealing with a dilemma  – should he follow his job down the coast and leave the Bay, or stay in town to see how his relationship with Mackenzie (Emily Weir) develops? His girlfriend refuses to get involved in his decision, and when he finally pushes her into talking, she says he shouldn’t give up his lifestyle for her – then kicks herself for practically packing his bags for him…

Elsewhere, Tane (Ethan Browne) and Felicity (Jacqui Purvis) continue to clash, with the continued hostility leaving Felicity feeling shaken up and alone. When Cash (Nicholas Cartwright) and Jasmine (Sam Frost) get back from their trip, Cash immediately realises his sister is in a bad place and takes action to help her.

Here’s what’s coming up for the week beginning Monday 15 November.

Chloe has planned a birthday party for Ryder at a nightclub, but doesn’t know how to get him there from the Diner without ruining the surprise. Theo tells her to leave it with him and sneaks up behind Ryder, cramming a bag over his head and shoving him into the back of his car. As he has been kidnapped for real before, Ryder is traumatised and when he realises Theo is behind the stunt he loses it, only to realise that Chloe, Nikau and Bella are waiting to wish him a happy birthday…

Chloe disgusted after drunk Ryder hits on girls in the club

Ryder is left shaken up, embarrassed and furious after being kidnapped by Theo and driven to his birthday surprise, where he begins to realise how close his girlfriend is becoming to the newcomer. He decides to deal with his feelings by turning to the booze and quickly becomes drunk and destructive. To Chloe’s disgust, she watches on as he tries to hit on one of the bar staff, only to have Tane show up and drag the birthday boy home to sleep it off…

Logan makes a decision about whether to leave the Bay

Logan has recently dropped a bombshell on his new girlfriend Mackenzie by revealing his job is moving down the coast and he has to decide whether to move away from the Bay or quit his job. He asks for Mackenzie’s opinion, but she doesn’t want to get involved in the decision and does her best to avoid him. Logan finally gets her to talk and she says that his adrenaline-filled lifestyle won’t be satisfied with a life in the Bay with her. After he has left, she kicks herself for practically packing his bags for him. Will Logan stay with Mackenzie and see if their relationship will go the distance, or follow his career away from the Bay?

Ryder embarasses Chloe in front of his entire family

It’s the morning after the night before, and Ryder has woken up with a terrible hangover and Ari’s face as the first thing he sees. When he learns that Chloe never made it home, he begins to suspect the worst, especially when he can’t get hold of her. He goes home for his birthday lunch, and to his surprise Chloe shows up. He struggles to contain himself and ends up letting his feelings out at the table in an emotional outburst in front of everyone – by asking Chloe, did she sleep with Theo?

Ari and Mia have been working hard to get their adoption application looking as positive as possible, especially due to Ari having a criminal record with armed robbery to his name. However, they had been feeling good after buying the gym, as the investment as small business owners would mean they can guarantee a child’s financial future. Unfortunately, the news from the application comes in – they’ve been declined, and Ari immediately knows it’s due to his record. Mia is beside herself – is their dream over before it’s even begun?

Dean has been avoiding having his son Jai visit, and he eventually tells Ziggy it’s because he doesn’t want his son to see him as less capable while he’s recovering from the crash. However, Ziggy convinces him that Jai just wants to spend time with his Dad, and Dean arranges for him to spend some time at the Farm House. However, when Jai shows up, he is pleased to see his Dad and keen to avoid Ziggy. When Ziggy leaves the room, she is upset to overhear him asking his Dad why she has to be there…

Justin and Leah continue to clash over Theo, with Leah determined to defend her nephew – even when he goads Ryder into a fight in the Diner. Leah tells Justin she wants Theo to move in with them, but Justin isn’t having any of it. After some advice from friends, Leah asks how Justin is doing and realises she’s been focusing so much on Theo, she forgot how much he would be missing Tori. Justin reveals that he’s finding it hard to be in an empty house – he still expects to see Mason sometimes, and Grace’s room is full of so many memories. Leah realises how much Justin is struggling with being away from his own family and decides to hold off on pushing for Theo moving in.

Cash and Jasmine return from their trip away, and while Jasmine is keen to set up another romantic getaway, Cash is distracted by the fact that Felicity is staying with a friend – it’s not like her. Although he tries to push the feeling away, it comes back when Roo asks him how his sister is doing and explains what’s been happening with Tane. Cash immediately contacts Felicity, and when she shows up she is unsettled and frantic. Cash knows he needs to take action to help her…