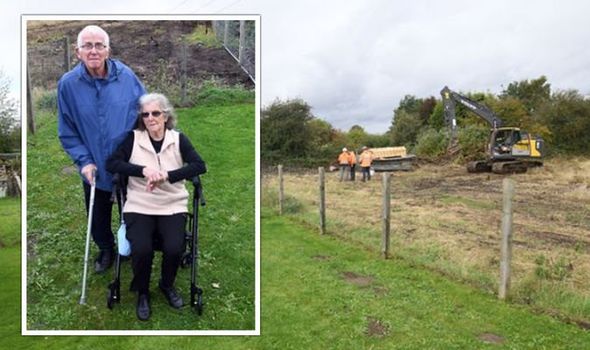 Laura and John Allen of Winterton, Scunthorpe said housing developer Keigar Homes have tried to claim a piece of land which the couple claims belong to the residents. If the proposed plans went ahead, the couple would lose around 10 feet of their garden, according to the project’s blueprint. Laura, 77, who was born in the house next door, told Grimsby Live the strip of land has always belonged to the houses on Cemetery Road.

When Laura saw workers putting a fence up across other gardens, she said she “shouted at them”.

“I ran up the garden and shouted at them to stop,” she said.

“I have lived in this house for more than 20 years and was born in the house next door.

“I know exactly where the garden ends.

“I asked the workmen how they knew where the boundary was and they said it was on their plan.

“The other houses may not have put a fence up at the end of their property, but ours has been there for years.

“We are not trying to steal land, we just want what is ours.

“I wasn’t about to let them take a bit of our garden.”

DON’T MISS
When to turn your lights on and off: Top tips to maximise your savings [INSIGHT]
Energy savings: Six appliances to switch off and save money [UPDATE]
How to attract wildlife to your garden: 10 top tips to start rewilding [ANALYSIS]

A dispute over the 10-foot strip of land began on October 8 after Laura confronted the workers.

The couple have been told nothing will happen to the land until Keigar Homes checks the Land Registry for the houses on Cemetery Road.

Laura and John believe the results of the check will prove they were right.

They believe the houses’ gardens were originally even longer.

John, 74, explained that Laura’s father used to live next door.

He said: “Laura’s father lived next door and used to get one shilling a week from the electric company because the wires went over his land.

“Our garden is on the same level, so that shows to us that this is our garden.

“They say that other residents haven’t established firm boundaries at the end of the gardens, whereas they have fenced theirs off to let a dog exercise.”

The couple’s grandson Robby said the couple have suffered a “great deal of stress” over the dispute and are worried that work would start without them realising.

However, Robby seemed confident his grandparents would be in the right.

“My grandmother knows the area and boundaries better than almost anyone,” he said.