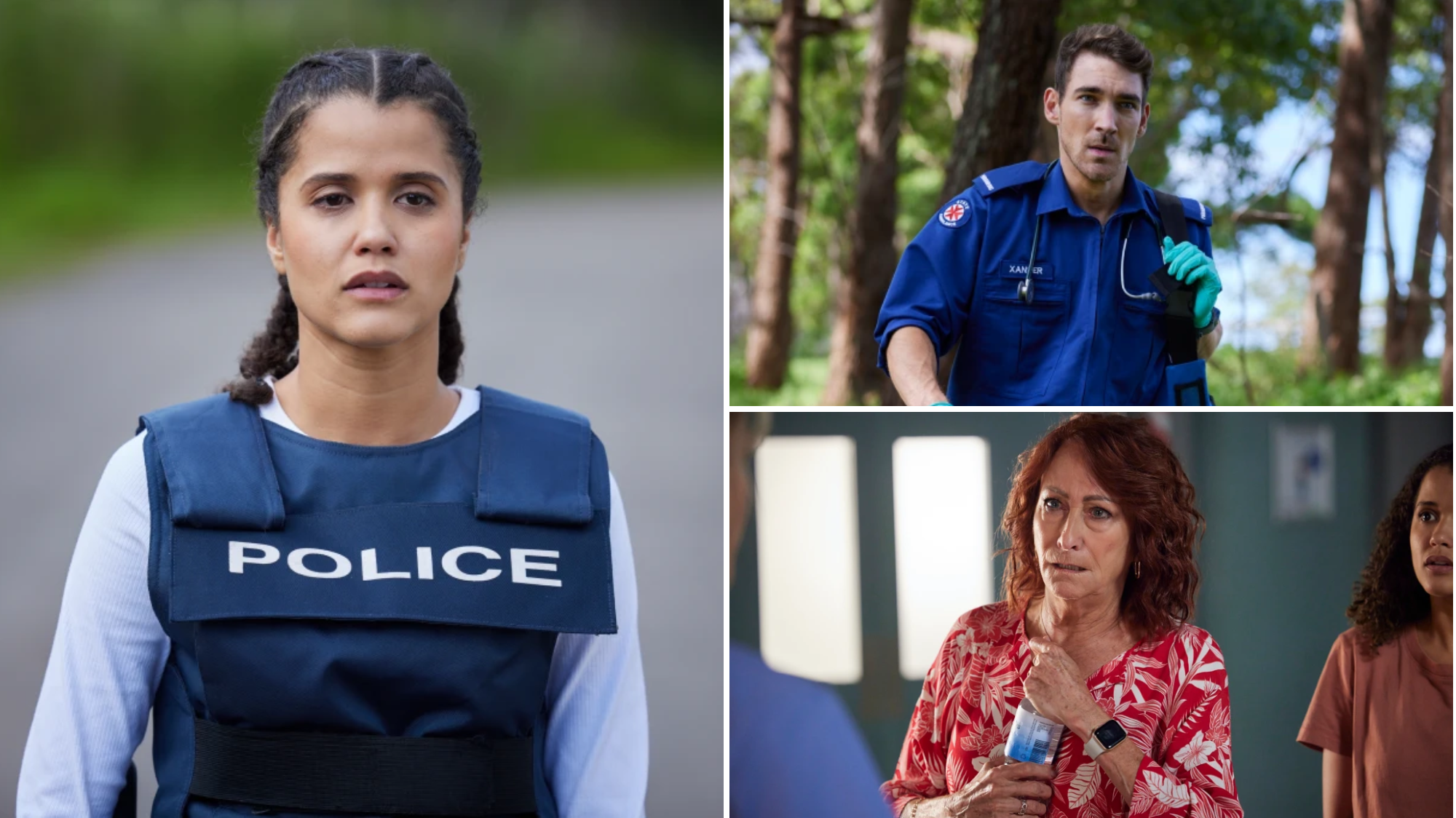 This week on Home and Away, the bikies are taken on in an undercover police sting with the help of Tane (Ethan Browne), who goes in wearing a wire.

However, the operation ends in disaster when gunshots are fired, one person dies and another is rushed to hospital in critical condition…

Elsewhere, Theo (Matt Evans) and Kirby (Angelina Thomson) take their friendship to the next level, but will everyone in the band be on board?

Remi (Adam Rowland) certainly isn’t impressed when he sees the pair kissing on the beach, and he and Eden (Stephanie Panozzo) come up with a new band rule – no hooking up with other band members! Will the new couple be able to obey?

Here’s what’s coming up for the week beginning Monday 12 September.

Felicity is arrested and locked in a cell without warning

Felicity has a confusing and upsetting time ahead of her after Cash approaches her in the Surf Club and tells her she has to come to the police station. When she resists, Cash takes the first opportunity he can to say she’s under arrest for assaulting a police officer. Incredulous, Felicity is dragged away and thrown into a police cell.

All Cash can tell her is that it’s for her own good – but as Felicity is left alone in the dark, she begins panicking. How long is she going to be stuck in the cell, and more to the point, why is this happening? She asks one of Cash’s colleagues if they know what’s going on, but she gets no answers. Upset, angry and confused, Felicity settles in for a long wait…

Nikau has been concerned about his uncle’s welfare since the bikies arrived in town and started threatening him over the money Ari stole several years ago. When Tane disappears one morning, he begins thinking the worst and worries more when he can’t get through to him on the phone. After a sudden brainwave, he checks an app on his phone to find his uncle’s device, and immediately discovers where Tane is. He rushes down to the bikie headquarters, only to be dragged in by security. Tane looks on in dismay as Tex and Marty decide it’s time for a bit of fun…

Theo and Kirby are banned from getting together

Theo has had an eventful week or so lately after auditioning successfully for Lyrik, becoming their new lead singer and struggling with Chloe’s sudden and unexplained absence. He finally gets a call from her, only to learn she’s moved to New Zealand and they’re over. He’s with Kirby at the time, and she suggests channeling his pain into music.

The pair are up all night writing a new song, and as they celebrate the fresh music with a hug, their elation turns into a kiss. However, their budding romance is quickly discovered when Remi spots them from a distance. He tells Eden, and the pair call a band meeting. They tell a dismayed Theo and Kirby that hooking up with other band members is banned…

Rose arrests Tex – then hears gunshots in the distance

Rose has engineered a police sting against Tex, Marty and the bikie gang after discovering her boyfriend was hiding a secret identity as a criminal. What’s more, he’s been forcing Tane to use the gym as a base for the gang’s undercover money laundering operations. She asks Tane if he’d be willing to work with the cops, and the Parata ends up walking into the bikie HQ wearing a wire. He gets Marty to reveal information about their laundering plans, which is enough for the police to close in. Rose immediately arrests Tex, but then she sees Cash running into the field without his bulletproof vest on. To make matters worse, Cash chases after Marty – then, in the distance, Rose hears two gunshots…

Will Cash survive as new doctor Bree struggles to save him?

Rose is horrified when she runs after the sound of gunshots and sees Cash fighting for his life on the floor after being shot by Marty. The ambulance quickly arrives, but Cash is bleeding out and when he gets to hospital the new doctor Bree Cameron struggles to revive him with CPR. She realises he must be bleeding internally, and he goes into theatre for multiple surgeries. After a while, Bree finds Felicity and tells her the news – her brother is now in critical condition, and the situation is bleak…

Lyrik may have found their new lead singer in Theo, but they don’t have a van after Bob left in their old one and hiring a temporary vehicle for each gig is proving to be costly. Taking matters into his own hands, Remi decides he knows exactly how to fix the situation and he heads down to the Surf Club to speak with ‘the hot local mechanic’. He asks Ziggy for a favour, but Dean is standing next to her and immediately shuts him down. Ziggy won’t be spoken for though, and they have a conversation without Dean a few minutes later. The next morning, the pair drive off on a secret mission, with Ziggy choosing to lie to Dean about having a work client that day. When Dean discovers through Justin that Ziggy is lying, how will he feel when he finds out who she’s really with?

Alf catches Marilyn in a surprising act of deceit

Roo has been struggling to find herself again after the kidney transplant operation, but when Alf suggests she teaches again she immediately gets to work setting up a tutoring business. She places a flyer on the Diner noticeboard and starts playing the waiting game. It isn’t long before she is thrilled to notice someone took one of the tabs with her number on it! However, she doesn’t get a call, and soon becomes dispirited. All is not lost though, as the next morning several more tabs have been ripped off! Later, the plot thickens as Alf catches Marilyn of all people ripping tabs off Roo’s flyer after hours…why is she having Roo believe that her business is kicking off when it isn’t?

Eden has a proposition for Mackenzie while Felicity is away

Felicity has only recently taken on new responsibilities as the new co-owner of Salt, moving from being a waitress and bartender to managing a restaurant alongside Mackenzie. However, her plans are put on hold after Cash is shot in the line of duty and she spends all her time in the hospital to be there for her brother.

Although Mackenzie completely understands it’s a family emergency, she can’t help but struggle with the workload at Salt. She can’t find staff to fill the roster, but then Eden sees an opportunity to both help Felicity and earn money for the band – why doesn’t she cover Felicity’s shifts? Mackenzie wonders if Eden can meet Salt’s high standards – will she take the risk?