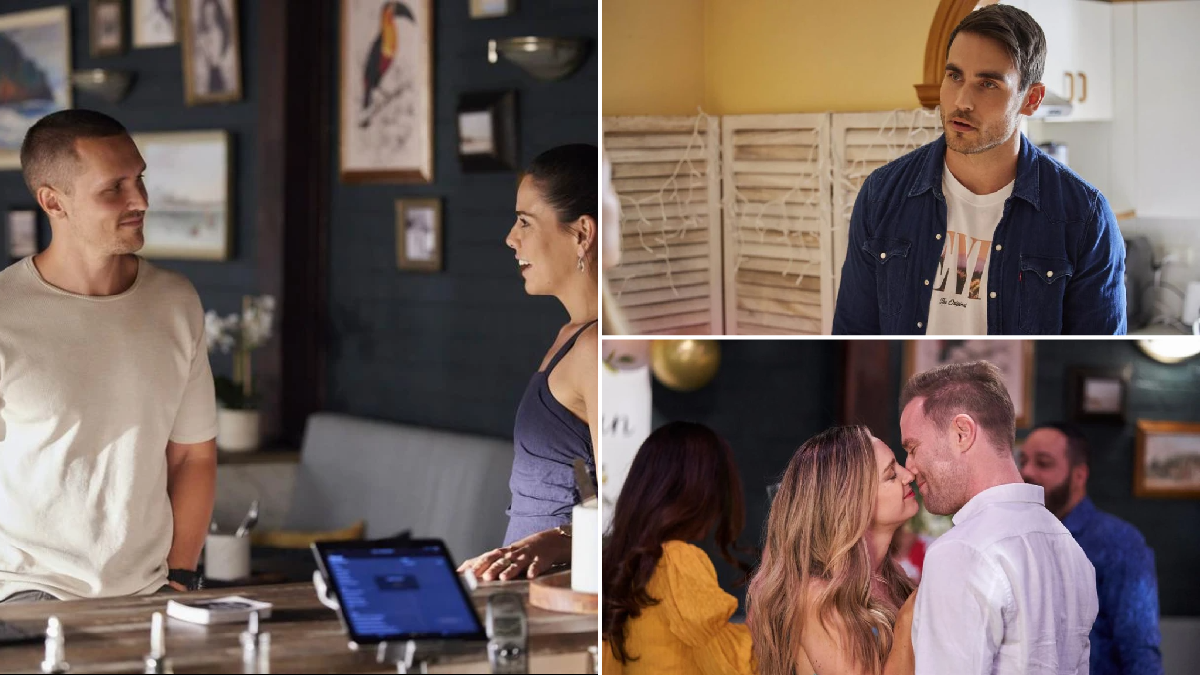 This week on Home and Away, Jasmine grows suspicious of Cash again after seeing his phone blow up with calls and texts from a mysterious woman called Felicity. Meanwhile, Tane deals with his own heartache by going out clubbing – where he runs into a party-goer who swiftly takes his mind off the pain…

Elsewhere, Chloe comes up with a less-than-innocent plan to launch her new business, manipulating her bosses into letting her lock up and taking advantage of the industrial kitchen after hours. Plus, Dean struggles with his physio and snaps at Ziggy. Is their relationship on the rocks already?

Here’s what’s coming up for the week beginning Monday September 27.

Who is mystery caller Felicity as Jasmine’s suspicions about Cash grow?

Jasmine is feeling confused about what Cash’s intentions are following their fantastic first date. After a few days go by without him getting in touch, she gets angry and sends him an icy voicemail, accusing him of ghosting her. However, he goes to find her and says he was just respecting her decision for only one date. They go to Salt together and get to know each other better, but Jasmine’s suspicions begin growing again when she notices Cash’s phone blowing up with calls and texts from a mystery woman called Felicity…

Tane is distracted from heartache over Ziggy during wild night out

Tane decides to take his mind off the painful breakup with Ziggy by heading out to a nightclub. When he walks in, he sees a stunning woman dancing and she heads over to him, revealing her name is Felicity. It isn’t long before they are drinking and dancing the night away, but Tane is soon taken aback by Felicity’s wild side when she jumps onto the bar and begins dancing like she’s working for tips. To his astonishment, she then hauls herself behind the bar and starts serving herself some drinks…

Chloe sneaks into the Diner after hours for risky business plot

Chloe is convinced that her new business idea will work – Mexican food, but delivered to your door. However, Ryder points out they don’t have the start-up money to make a go of it. That won’t stop Chloe, though, as she begins plotting…at the Diner, she tells Irene and Marilyn that she can stay back after her shift to lock up.

They agree to let her have the responsibility and prove herself – which leads to her jubilantly setting up the kitchen after hours…she then tells Ryder to meet her there, and says that she’s received permission to use the industrial kitchen to start their new business…

Tori and Christian have begun planning for their second attempt at a wedding, following the blip which saw Christian struggling with his purpose in life and becoming obsessed with hospital patient Rachel. When the newly re-engaged couple realise they need to begin all over again with preparations, Justin points out they don’t have to start from scratch – why not use the vineyard again? However, when Tori calls Brody with the good news, her brother has some news of his own – Simone is 12 weeks pregnant…

Mackenzie has a surprising response to Logan’s date offer

Mackenzie is finally moving forwards after her painful breakup with Ari, and she has been flirting with newcomer Logan – the doctor who showed up at the car crash to save Dean’s life. While she has a gossipy walk with Ziggy, she sees Logan shirtless and showering up ahead, taking the excuse to engage in some more flirtatious conversation. However, when Logan heads into Salt and suggests they have a drink together once her shift is over, she declines the offer, saying she isn’t ready to date just yet…

John and Justin continue to lock horns over the garage

Justin has just been confronted with a break-in at the Garage, only to discover that the intruder was none other than John, helping himself to the paperwork and rifling through it. After the two men get into a row over the situation, Justin offloads to Leah and Marilyn, who suggest that he lays down some ground rules for John to follow. A few days later, Justin and Leah are thrilled to learn that the money Susie stole from them will be returned – but when they tell John they’re going to buy the Garage themselves now, will John retract his own offer on the property?

Nikau is told he’s being released from the hospital, but his despondent mood is worrying Christian. He mentions it to Ari, who promises to keep an eye on his nephew. At home, Nikau is awkward with both Ari and Mia, and gets angry even more easily than usual. Ari suggests he gets in touch with Bella, so he shows up at her door – but he doesn’t have the message she is expecting. After weeks of trying to get her back, Nikau makes clear what he said in the hospital – she needs to stop texting and calling him, because he doesn’t love her any more…

Ziggy and Dean on the rocks as he struggles with physio

Ziggy and Dean have been in a good place since getting back together, but when Logan reveals his physio is beginning, Dean’s mood quickly sours. Having been in a major accident before, Dean knows the difficulty ahead, and sends Ziggy away. Hurt, Ziggy unloads on Mackenzie and questions why he would push her away after they only just got back together.

She goes back to him, but Dean is struggling with his physio and snaps at her to leave again. He then kicks the physio out…is Dean’s rehabilitation going to impact his renewed relationship with Ziggy?