Social media users can’t seem to get enough of Alexis LaRue and her fast-growing babies.

LaRue, 22, has been posting TikTok videos of her identical twin daughters, Camila and Elena, since their birth in March 2021, and fans can’t help but notice how big they’ve gotten in less than a year.

At seven months, Camila and Elena weigh nearly 21 pounds each. They’re also in the 98th percentile for height – which stands out whenever LaRue holds them in her arms. 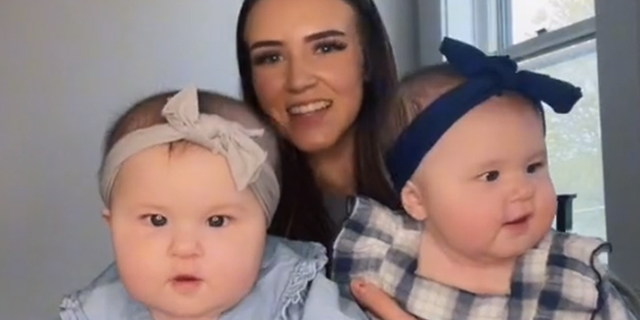 Social media users can’t seem to get enough of Alexis LaRue and her fast-growing babies, Camila and Elena. The identical twins have amazed people with their size.
(Alexis LaRue/The Mejia Family)

“Going viral has been a surreal experience for my family and I,” LaRue told Fox News. “We never would have imagined this could happen to us.”

Most videos LaRue and her family share have a view count that’s larger than any football stadium in the U.S. Their account, The Mejia Family has gained more than 716,000 followers in the short time that they’ve been on the app.

Their highest viewed video is from Sept. 27 and it’s been seen by more than 48.7 million people.

LaRue says her twin girls’ likely look bigger than they are because of the angle she has to film. She admits her petite frame probably plays a role as well since she’s around 5 feet 3 inches tall and 115 pounds.

Her fiancé, Leo Mejia, is 5-foot-11, and their girls look noticeably smaller when he holds them.

Some commenters have refused to believe that height and camera perspective can change how big LaRue’s babies appear, and have tried to allege that filters are at work. But, LaRue has posted multiple videos disproving this theory.

“If I knew how to edit my babies’ size this good, I’d probably have a career in film or editing,” LaRue said in a video she shared on Oct. 2.

Outside of the few naysayers, most commenters have responded positively to the Minnesota-based family.

“I began making TikTok videos for fun, as it was something to do in my free time,” LaRue told Fox “I never expected it would get the response it did. I’m just happy I can share my beautiful twins and bring smiles to the world.”