‘America truly is a third world country in a Gucci belt’: Viral video exposes the staggering price of a four-month stay in a US hospital for COVID-19 – with a total cost of $2.8 MILLION

A viral TikTok video has shed light on the staggering cost of a prolonged hospital stay in the US during the pandemic.

TikTok account @letstalkaboutbusiness shared the video, claiming to show the cost of a four month stay in an American hospital with COVID-19.

The clip includes an itemized list of charges, from anesthesia to physical therapy to a stay in the ICU, which in total come out to a whopping $2,850,776.10. 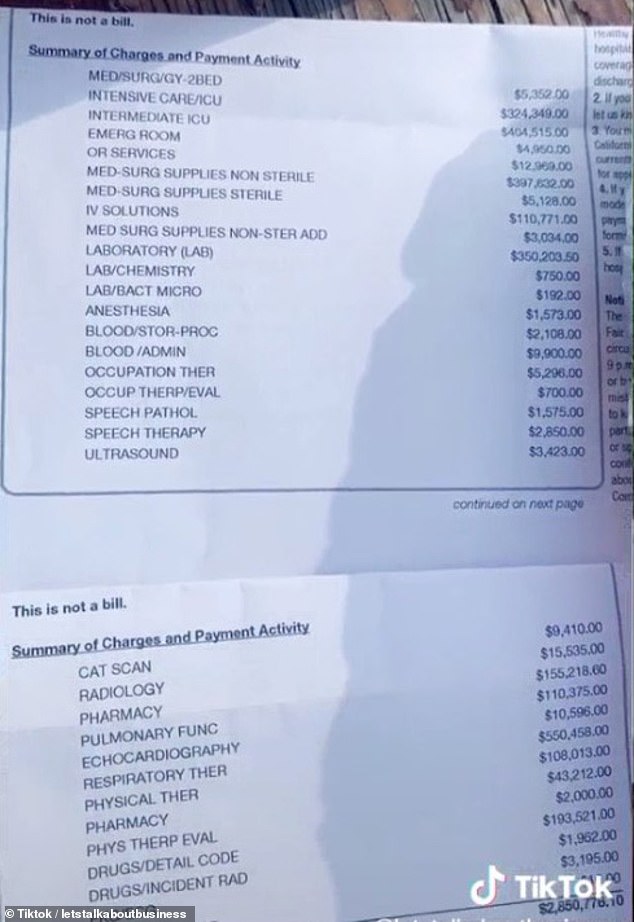 Massive! TikTok account @letstalkaboutbusiness shared the total cost one person faced for a four-month hospital stay due to COVID-19 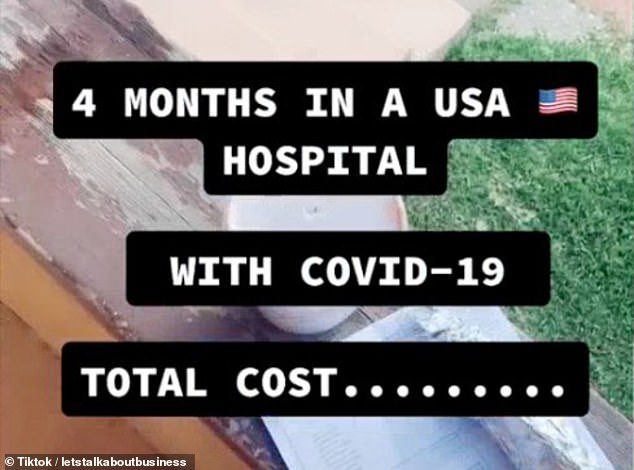 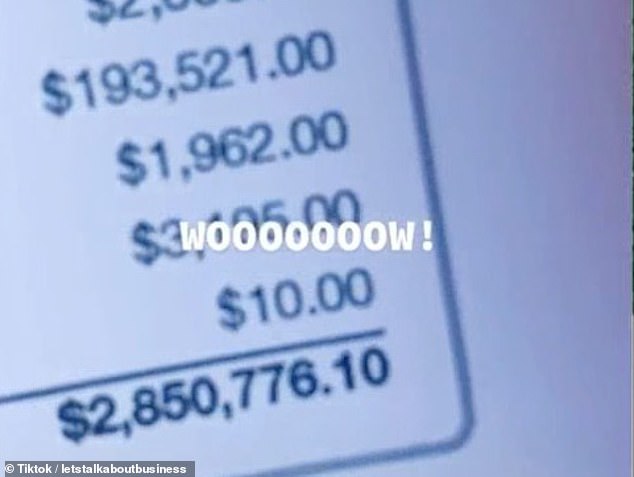 Wow! Though the list is not a bill — and is likely the charge list before insurance — it has shocked commenters

The printout explicitly says that it is not a bill, but an itemized list of charges for the total cost of the stay. It is likely that it accounts for charges made before insurance is applied, which may cover most or some of the total.

Most American insurance plans, however, would not cover the entire bill, and many could easily still leave patients in thousands of dollars of debt.

The video has earned an incredible 9.6 million views in just two days, and scores of bewildered and horrified comments have poured in.

‘USA is not a country. It’s a business,’ wrote one.

‘America truly is a 3rd world country in a Gucci belt,’ quipped another.

One joked that at that point, a person should ‘just pull the plug,’ while countless commenters from countries with universal healthcare chimed in to gloat.

‘See if they have any Groupons,’ one more commenter suggested.

According to Becker’s Healthcare, the average cost of an inpatient stay per day in the US in 2019 was $2,372 for state and local government hospitals, although costs vary depending on the state. 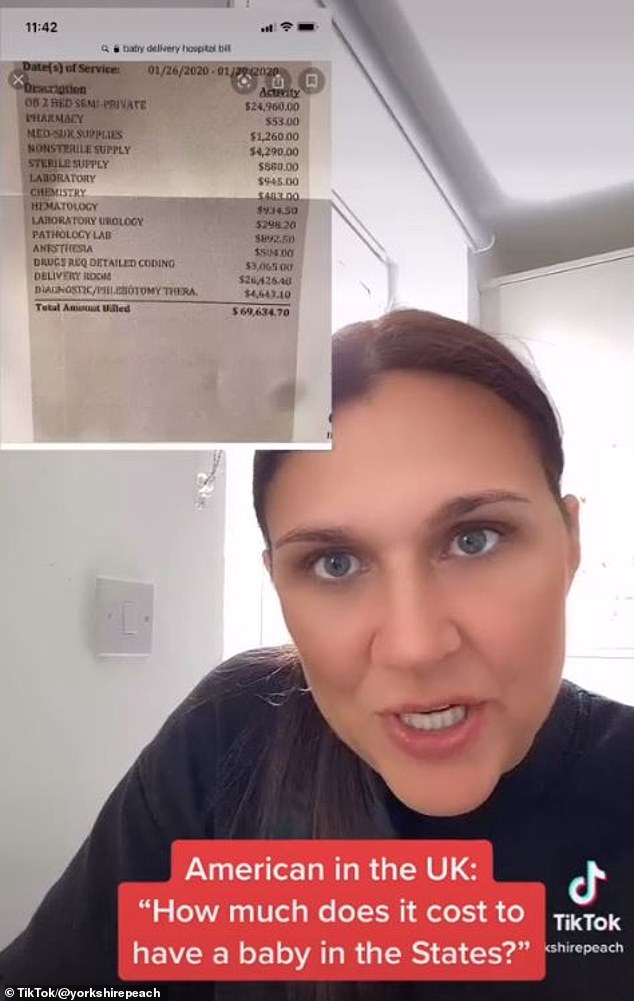 Expensive! Lisa Dollan, 39 — who is originally from Atlanta, Georgia but now lives in Leeds — went viral with a video about what it’s like to have a baby in the UK vs. the US 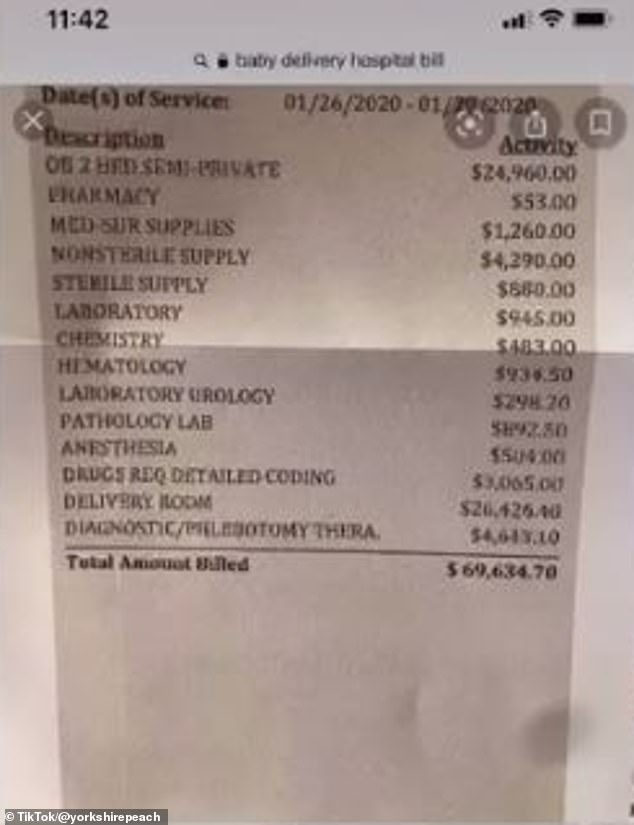 Crazy! The mother-of-one showed off an American hospital bill, which without insurance came to a staggering $69,634

Earlier this year, an American woman currently living in the UK highlighted one of the major differences between giving birth in the two countries: That in the UK, it is completely free, but in the US, it can cost tens of thousands of dollars.

Lisa Dollan, 39, from Atlanta, Georgia now lives across the pond in Leeds, but explained in her own viral TikTok video what it was like for her to have a baby back home in the US.

The mother-of-one showed off a hospital bill, which without insurance came to a staggering $69,634.

‘So a lot of people say, so how much does it cost to have a baby in the States? Well, this is without insurance,’ she said, showing an itemized bill from a hospital stay.

Americans without insurance are expected to pay the entire bill, though it is possible to negotiate with the billing department to lower the cost.

But even for those who have insurance, the bill is not covered in full.

‘With insurance, it probably pays it about 80-20, is the usual insurance plan, meaning that the insurance company pays 80 per cent and you pay 20 per cent,’ Lisa said.

Insurance plans vary in the US and may pay different percentages of the bill, depending on services rendered or whether a hospital and health care provider are considered ‘in network’ or ‘out of network.’

Out-of-network charges are less likely to be covered.

Some insurance plans will pay most or a large percentage of all in-network charges, while others require the insured party to meet a deductible — that is, to pay a certain amount on their own each year before the insurance kicks in.

Deductibles can be thousands of dollars, and even once they’re met, the insured party may have to pay co-insurance every time they go to a doctor.

What’s more, Lisa pointed out, the itemized charges on a hospital bill are rarely representative of real-work costs, so a bandage that costs pennies could be charged for much more.

‘What the pharmaceutical companies and the hospitals do is jack up the prices. So that that 20 per cent becomes higher and higher,’ she said.

‘And then another $26,000 for the actual delivery room, where you go back and have the baby. And then the other little bits and bobs that you need.’

Lisa is clearly loving the health care in her adopted country, captioning the video: ‘Grateful for the NHS yet?’