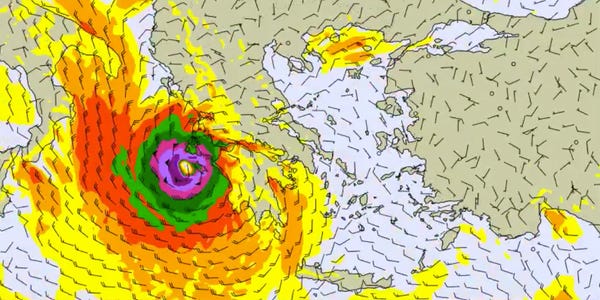 An unusual, hurricane-like storm was bearing down on Greece on Friday.

The phenomenon, which happens less than once a year, is known as a "Medicane," — a term that incorporates the words "Mediterranean" and "hurricane."

The storm, named Ionas, was as of early afternoon Friday over the western portion of Greece, forecast to move east.

A bulletin from the Greek meteorological agency warned of thunderstorms, rain, and very strong winds, first affecting the islands to the west of the mainland.

A report by the BBC showed images of boats being battered in a harbor on Kefalonia and damage to a sidewalk and fencing on Zakynthos.

It said the storm had winds as strong as 73 mph.

Medicanes are as a rule less powerful than the Atlantic hurricanes, which regularly cause devastation in the Caribbean and along parts of the US east coast.

According to CNN, Ianos was on Friday roughly equivalent to a strong tropical storm in the Atlantic.

Medicanes are usually more feared for their rains than their wind speeds. CNN said Ianos could drop 250 millimeters of rain in some areas, with highs of 500 millimeters in extreme cases.

In 2017, storm Numa, also a Medicane, caused 21 deaths, mainly from flash-flooding, according to Weather.com.

At the time of writing, there were no reports of injuries or deaths from the storm.