A ’super-fat’ woman has learned to love her curves, with the help of her husband.

Amalie Jennings, originally from Denmark, moved to Hertfordshire to be with her British husband Sean.

The 25-year-old has spent most of her life hating her body, which resulted in her self-harming, but she now embraces her size 30 frame.

Most people in the couple’s lives have been accepting of their ‘mixed weight relationship’, however they have had to cut contact with Sean’s father, although they’ve not revealed the exact circumstances. 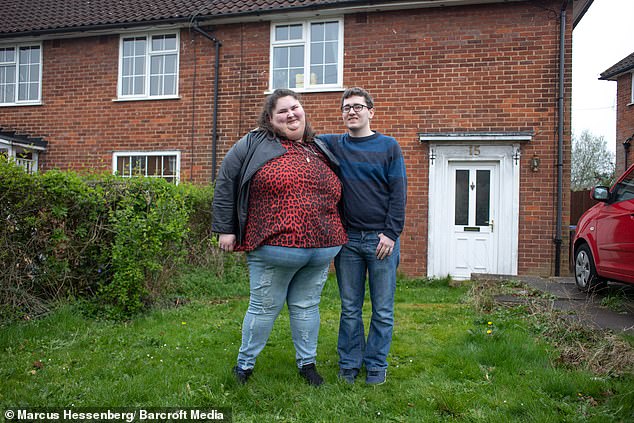 Amalie Jennings, 25, (pictured) used to hate her body, but thanks to her husband Sean (right), she learned to finally love herself. Pictured: The couple at their home in Hertfordshire 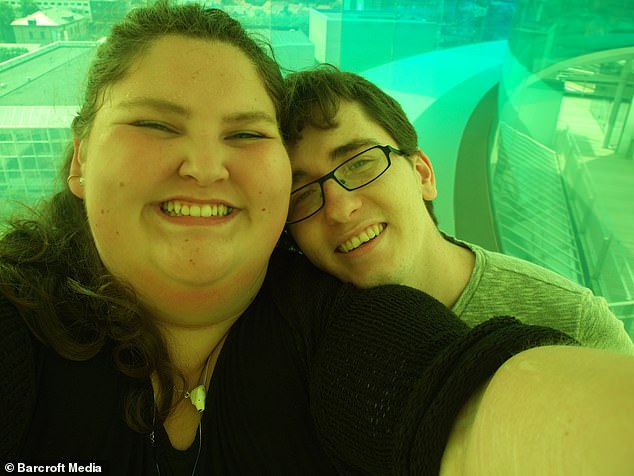 Amalie and Sean met online in 2008 and dated long distance for nine years. Amalie could not believe Sean kept talking to her after seeing what she looked like

‘I have always been fat since I was two years old. My mum took me to the doctors because I was gaining a lot of weight,’ Amalie said.

‘Since as long as I can remember I have been fat. And of course that comes with a lot of bullying, a lot of picking on. My oldest memory of bullying is in Kindergarten, I was around four. And all the kids picked on me for being fat.

‘I gained even more weight, which meant I was picked on even more. I started self-harming and I got picked on again. I just had a really horrible self-image, I hated looking at the mirror.

‘I hated wearing or picking out clothes because nothing would fit me as a child – I had to shop in the woman’s department to get things that would fit.

‘I could never wear what my friends wore or what’s in fashion at the time because nothing would fit me.’ 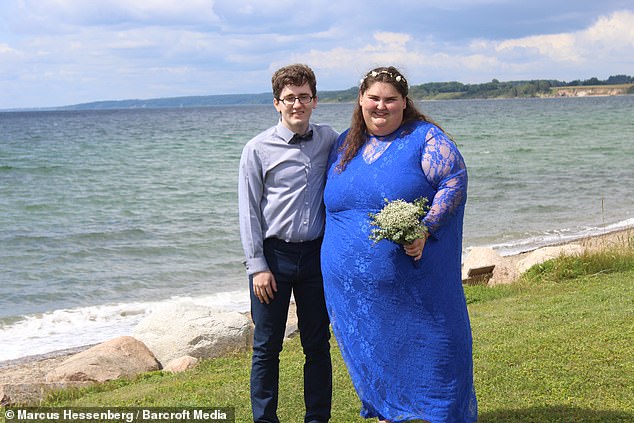 Pictured: Sean and Amalie on their wedding day, two years ago. Amalie is now confident about her body 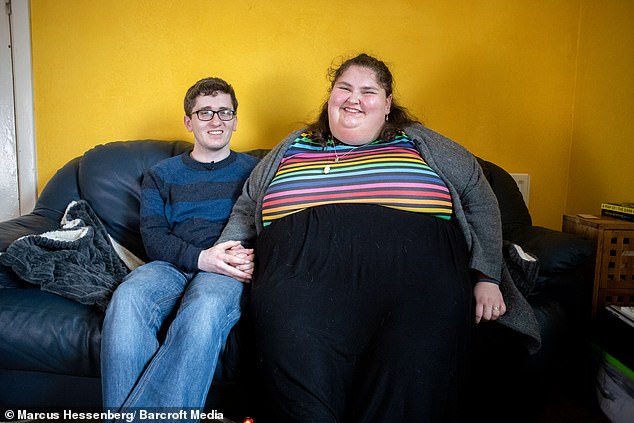 The happy couple posing for pictures in their living-room. Sean (pictured) said he does not have a fetish for fat women, but was attracted to Amalie because he loved her

Amalie first started to recognise that her body shape wasn’t accepted by society when she started reading books.

But all of that changed when Amalie met her husband Sean via an online video game in 2008.

She told BTV: ‘My husband Sean and I met 11 years ago on a game on the PlayStation. And it was kind of a weird friendship that started, I thought he was an old man just looking for a young woman to talk to but then I learned he is my age. 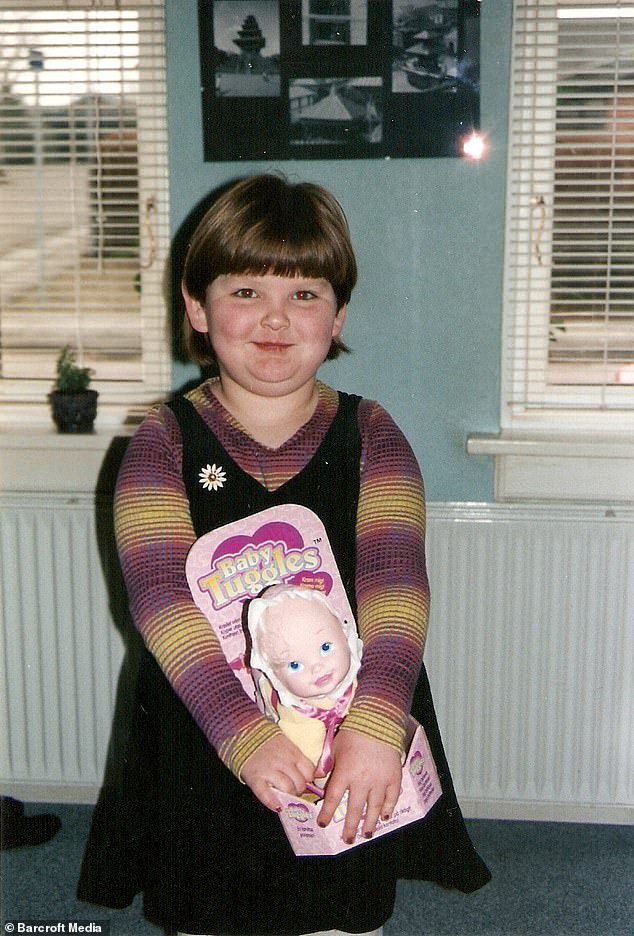 Amalie pictured as a child. She’s struggled with her weight since childhood and used to be badly bullied because of it

‘And the thing about online relationships you get to know a person in a different way. Of course we had seen pictures of each other but it took a while for us to cam.

‘You could see how fat I was in the pictures but he kept talking to me. I was so insecure about myself, I would hide my double chin.

‘But he still didn’t care, he just wanted to talk to me. So we became best friends really fast, and it actually took a while before we realised we were in love with each other. I started giving him hints that I liked him but he didn’t pick up on them.’

Amalie would even post poems on her Facebook profile hinting at her love for Sean – but while he would read them and compliment Amalie on her poems he didn’t realise she was writing about him.

Finally she plucked up the courage to tell Sean the extent of her feelings, only to learn her felt the same way too.

She said: ‘It was the weirdest feeling because I haven’t had luck with boyfriends before. And finally there’s this guy, 500 miles away who fancies me as much as I fancy him. 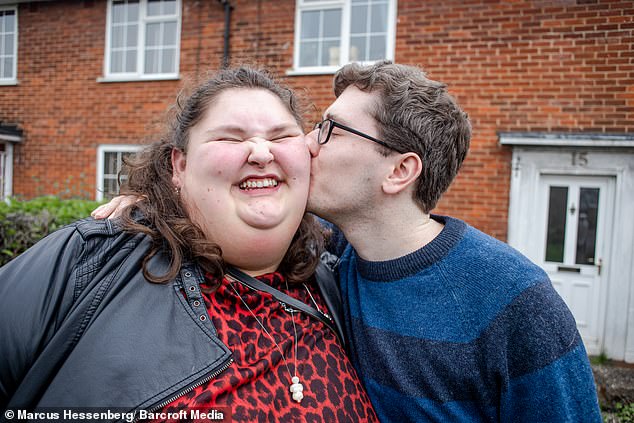 Amalie and Sean started dating long distance, visiting each other for nine years, and finally marrying on a beach two years ago.

Sean told BTV: ‘I wouldn’t say I am generally attracted to larger women, I am attracted to people that I love really so it just happened.

‘I mean, maybe in my head before we met, it wouldn’t have been someone as large. But it just happened to be and it is not that I find her any less attractive necessarily.

Amalie added: ‘It’s never been like a fat fetish thing but you haven’t like obsessively said “Oh, I love your fat stomach” and stuff like that. 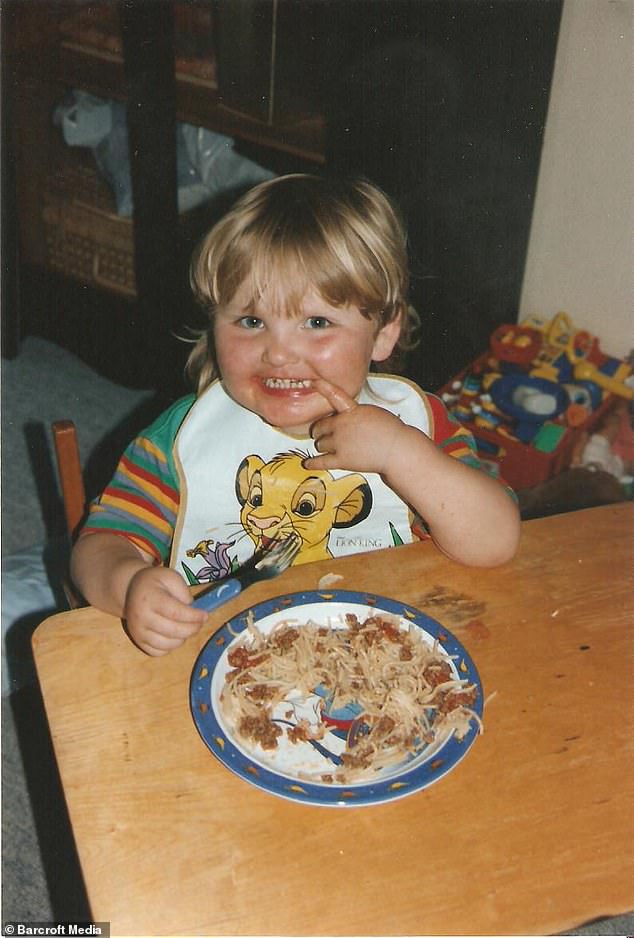 Amalie as a child. She said that as she’s grown older, she’s realised that while she can’t stop people judging her and looking at her, she is able to stop caring about their opinions

Amalie wants to highlight issues that surround fatphobia in the medical field too.

She said: ‘There’s a lot of that phobia in the medical field. And that’s what gets me, I don’t feel safe going to the doctors anymore, because you can go in with a broken arm and you will be told you should lose weight.’

‘I am happy in my body and I am happy with who I am and what I look like, and I don’t want to fall into the pressure of having to lose weight to be accepted by everyone else.

‘If I was ever to go back and speak to a younger Amalie I would say stop wasting time hating yourself. Yes your body is different but it doesn’t mean that it’s a bad body.