Afghan interpreters and other locally engaged workers who are stranded in Afghanistan will have their visas extended every three months, as the federal government moves to address concerns that it has not offered any permanent pathways to protection.

The government has been facing increasing criticism for not granting a single humanitarian visa out of the initial 3000 places promised to people fleeing Afghanistan following the Taliban’s takeover of Kabul, despite thousands of Afghans already moving to Australia. 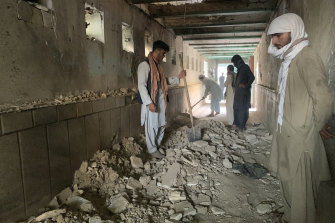 Terrorist attacks are still rife in Afghanistan. Here, people inspect the inside of a mosque following a suicide bombers attack in the city of Kandahar.Credit:AP

Immigration Minister Alex Hawke will on Thursday announce that the visas of Afghans who were employed by the Australian government during the decades-long conflict, but are still stuck overseas, will be extended on an “ongoing basis”.

Mr Hawke will also call on the Taliban to not impede the efforts of Afghans wishing to leave the country.

“Australia expects the Taliban to uphold its undertakings to allow Australians and Afghan visa holders to depart Afghanistan safely if they wish to do so. We continue to work with international partners to that end,” he said.

“Australia will also continue to utilise our close working relationship with the United Nations High Commission for Refugees to identify those Afghans most in need.”

Days after the Taliban takeover in August, Prime Minister Scott Morrison promised at least 3000 Afghan refugees would be granted permanent humanitarian visas in 2021-22. But officials from the Department of Home Affairs this week revealed none of the visas had been granted yet.

“We haven’t granted protection visas to anyone who’s just arrived, we are not at that point yet,” Department of Home Affairs first assistant secretary David Wilden told a Senate inquiry on Monday.

Visas granted under the locally engaged employee (LEE) program only run for three months at a time, leading to many refugees facing uncertainty over whether they will be able to permanently stay in Australia. It also means their visas could expire while they are still making their way to Australia.

Mr Hawke last week gave Afghans on all temporary humanitarian visas who are already in Australia a 12-month extension, and he will announce the LEE visa-holders who are offshore will now be renewed on an ongoing basis every three months.

The government has defended the fact that no permanent visas have been granted on the basis that they take significantly longer to process than temporary visas, such as those granted under the LEE program.

Under the pledge by Mr Hawke, the government will provide an “ongoing extension” to the visas of Afghans who helped Australia over the past two decades.

Mr Hawke will also confirm that Afghans outside of the LEE program who were granted a temporary humanitarian visa will receive priority in Australia’s refugee intake.

The government has also made a change to regulations that will allow Afghans within Australia to apply for offshore protection, giving them access to more support including education, health and housing services.

Mr Hawke said the government would “continue to make announcements regarding Afghanistan and the evolving humanitarian situation in the near future”.

Since the fall of Kabul, almost 2000 Afghan locally engaged employees and family have been brought to Australia, in addition to about 2000 Afghans granted protection visas since 2013.

More than 1600 other Afghans have also been evacuated since 18 August, adding to more than 10,000 Afghans that Australia has granted permanent protection to since 2013.

More than 130,000 people in Afghanistan have applied for humanitarian protection in Australia.