My friend's children run barefoot on the clover-green lawn at a festival in a riverside town. People are sprawled on picnic rugs, listening to a traditional Irish band. Soon we'll head home, have some wine, think about cooking dinner. It's Sunday afternoon and for the first time in a long time, I'm present, not distracted by the terror of facing another Monday.

On the horizon of my conscience, thick black plumes of smoke hang in the calm. A few weeks into my indefinite career break, I'm still having flashbacks to the burning bridges I'd crossed and left behind when I resigned from my job and booked a one-way ticket to Ireland. In less than a month, I was living in another country with no concrete plan. I am still trying to make sense of my actions. 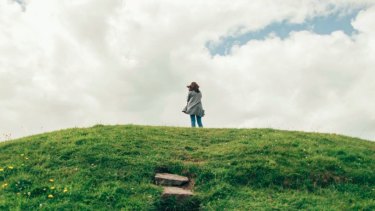 ‘ Every stressful day shaved thin slices off my health, leisure time and relationships. The effects were negligible at first, but left a cavernous hole in my wellbeing over time. ‘Credit:Getty Images

I'd been subscribing to the mantra "you have as many hours in the day as Beyoncé". I rose at 5.30am to exercise and rarely took a sick day. As a single 35-year-old woman with few reasons to rush home, work crept past sundown and well into my evenings.

Extra gigs were a financial necessity.

In living like this, I wasn't living at all. And I'm not alone. Deloitte's 2018 survey of millennials found a majority of respondents had taken on, or would consider, freelance work in addition to full-time employment. Only 17 per cent said they wouldn't. Far from being the lazy generation, we're burning ourselves out to get ahead.

In the year leading up to my realisation, I'd challenged my managers, declaring that we could go above and beyond, relentlessly pushing, fighting and insisting. Then, inexplicably, I fell silent, grudgingly taking note of action points in meetings, and it seemed only a never-ending list of things to do prevented me from sinking into permanent inertia. "If I have to work until I'm 75, how am I going to do this for another four decades?" I wondered.

I traded my morning workout for extended dream time. Only with my eyes closed could I escape myself and postpone the anxiety that would creep in with consciousness. I'd set my alarm for the last possible minute, sometimes rolling into the office late, with no fear of the ramifications.

For someone who'd been habitually punctual and wholeheartedly committed to goals, this feeling of indifference did not sit well. Every stressful day shaved thin slices off my health, leisure time and relationships. The effects were negligible at first, but left a cavernous hole in my wellbeing over time.

Women are enduring a perfect storm of challenges that make ambition increasingly difficult to maintain. In February 2019, the federal government's Workplace Gender Equality Agency reported that Australia's full-time gender pay gap was 14.1 per cent, with women earning an average of $239.80 less than men per week. Women are often time-poor, caring for both children and ageing parents, and the difficult housing market and rising childcare fees only add to the stress.

In such circumstances, breaking even is an achievement and a career finish line and comfortable retirement feel bleakly distant. Is it any wonder the "girl power" war cries have become faint? Few of us are living the dream the Spice Girls sold us in '90s.

On the day before I booked my flight to Ireland, I arrived at the office, made a coffee, read the paper, checked my emails, feigned interest in a meeting, stepped out to get my nails done and then called a girlfriend. "Can we grab a drink after work? I'm about to do something stupid," I said, knowing this unsustainable rebellion would force change.

Over a pinot, I told her I'd lost my drive. I had to go. I waited for her to tell me that good jobs are precious, that we all have uninspiring days, weeks and months. Instead, she raised a glass. "You have years of great experience behind you," she said. "Work is not all of who you are." During a moment of hesitation, another friend said, "I will put you on that plane myself if I have to." As I prepared to blow up my life, it was reassuring to know I had the support of loved ones.

Australian Michelle Ryan, professor of social and organisational psychology at the UK's University of Exeter, studies ambition and says my experience reflects her findings. "Our research shows that women's ambition tends to start off at equivalent levels to men, but that over time women's ambition erodes away at a much greater rate than it does for men."

Could it be the female body's biological need to shrug off the office blazer and slip into the threads of motherhood that causes this itch? No, says Ryan. She's seen motivation vanish in young science students, police officers in their late 20s, and surgical trainees in their 30s.

I can relate. I worked in advertising, an industry where a male frontline has developed an impenetrable shield around most of the senior positions. Not that I aspired to those roles, though maybe the perception that there was no place for me at the top played a part. But I didn't love the work enough to be wedded to my desk.

I can't chalk my feeling up to gender alone, though. In recent years, I'd chosen roles for money over passion. In doing so, I'd wandered well off my chosen path in the name of getting ahead financially. As long as I actively chose unfulfilling work, I couldn't have sustained ambition.

Women’s ambition tends to start off at equivalent levels to men, but over time erodes away at a much greater rate than it does for men.

Rowie Geraerts, 29, worked briefly as an advertising copywriter after leaving university, but quickly made a dramatic career U-turn. "I realised I wanted to pursue my heart rather than my head," she says. She journeyed to India to train as a yoga teacher. As a result, not only has her work taken her from Australia to Albania and beyond, she has the glow of someone who's never been subjected to an eight-hour stint in a drab cubicle.

Geraerts aims to challenge the perception of what it is to be ambitious and says this is essential to her success. "I have to work to get the classes and constantly develop new offerings for my students if they are to return," she says.

Many people tell her they've considered becoming yoga teachers. Few succeed, because they don't have the dedication required to make a living. In 2019, Geraerts hosted a trek in Nepal and has a range of retreats in the pipeline. Her philosophy is simple: give people positive experiences. It's a reminder that ambition comes naturally when you're offering something you believe in.

A mentor introduced me to the concept of managing my energy versus my time," he says. "I needed to become aware of the decisions I was making that were depleting my energy." At Energex, his team completed 1213 assessments and found that Australian workers were experiencing an overwhelming energy crisis.

"All of my female clients are, on paper, successful professional women; however, whether they see themselves this way can be another story," Hall says, adding that the guilt, shame and frustration that come with trying to keep everything "under control" are extraordinarily depleting.

He believes there are four components that set us up for success: fuel, fire, feeling and focus. Fuel is the quality food, fitness and sleep we need to perform and to build the fire required to be energised for work. With fire, we can nurture our passion and play to our strengths. Next we must maintain the relationship we have with ourselves – when we are feeling good, we strengthen the personal and professional connections around us.

Finally, when all these components are in good order, we're able to focus, which enables us to set goals and propel ourselves forward. "It all starts with being kinder to ourselves," says Hall. "Trying to be the best in every aspect of our lives is exhausting, and more often than not means we don't achieve this goal in any area."

Sitting outside an Irish cafe, chatting to the owner who's watering the plants, I'm wishing I'd let go of control sooner. After a few weeks of rest, I've come to realise I need this time to nurture my whole life in a way that inspires me to leap out of bed on Monday morning. And not just this week, but in the decades to come.

This article appears in Sunday Life magazine within the Sun-Herald and the Sunday Age on sale June 23.