A philosopher, a theologian and a cartographer are taken by the idea of a great, uncharted southern continent. The philosopher imagines discovering wonders of nature, while the theologian dreams of a terra nullius for sacred contemplation. The cartographer wants to map it. The three of them find a boat to take them south, to ultima thule. To Antarctica. None of them will survive to tell the tale but the ice has its own way of giving up secrets. 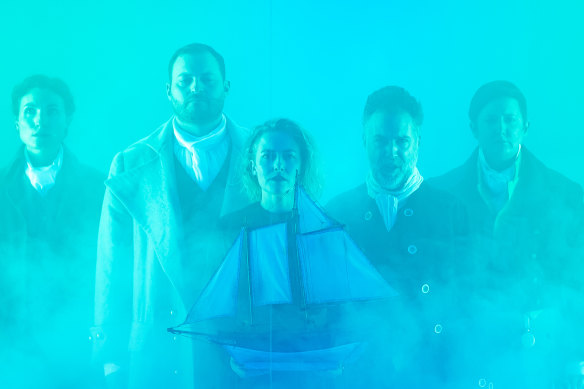 Antarctica is a beautifully crafted story that operates on different time scales.Credit:Wendell Teodoro

Opera is the ultimate collaborative genre and in this world premiere, directed by Imara Savage, the set (Elizabeth Gadsby), lighting (Alexander Berlage), sound (Bob Scott) and video art (Mick Daly) amplify and complicate the impact of the words and music. The result is a beautifully crafted story that gives up its treasures in its own time. There are moments when I was uncomfortably aware of the slow unfurling of the story, recognising a pattern evolving, realising it must run its course, and that would take time. But, like noticing stars appear in the sky, or ice melting, or water levels rising, Antartica rewards patient and unflinching listening.

Time operates on many different scales in Antarctica. There is history – of thought, of exploration, of music – conveyed through Wright’s words, Gadsby’s splendid costumes and Finsterer’s score, shot through with musical old friends that dissolve like memory. There is time now, marked out by conductor Jack Symonds, the pulse slipping through his fingers like sound through fog. And there is deep time – the time captured in layers and layers of ice, in the slow change of a continent, evoked visually by Daly’s absorbing video art and Berlage’s transformative lighting.

Finsterer conjures a wide palette of sounds for the Netherlands Asko|Schonberg ensemble, from the grey moan of the viola d’amore to the blinding white of high piccolo. She also uses voices for their intrinsic character, their timbre, as much as their ability to convey words and emotions. Jane Sheldon’s unmistakeable, light-filled tone gives the Daughter an otherworldly clarity, while Anna Fraser, as the Philosopher, navigates a maze of melisma with tenacity and grace. The Theologian, Jessica O’Donoghue, duets with the Daughter in dreams of wonder. As the Cartographer, Michael Petruccelli is a bluff and urgent presence, while Simon Lobelson, as the Captain, unravels with heart-wrenching beauty.