On Monday night, a 58-year-old silkscreen by Andy Warhol sold at Christie’s for a record $US195 million ($281 million). 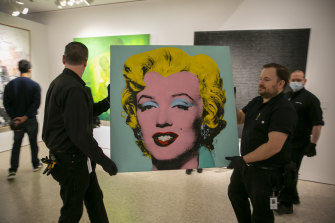 Shot Sage Blue Marilyn being carried into the Christie’s showroom on Sunday. The artwork sold for $USD195 million on Monday.Credit:AP

The painting, Shot Sage Blue Marilyn, was created by Warhol in 1964. It, along with the 35 other lots in the sale, was consigned by the Thomas and Doris Ammann Foundation in Zurich. Thomas, a noted art dealer and collector, died of AIDS-related complications in 1993; his sister Doris took over the gallery and ran it until her death last year. All of the sale’s proceeds will go to the foundation, which is devoted to healthcare and educational programs.

The prior record for an American artwork was $110 million for a Basquiat.

The Marilyn was the last lot in the sale, meaning that despite protracted bidding for many of the other lots, spectators inside Christie’s New York sales room stayed firmly in their seats until the end. (Under normal circumstances, 8pm is the witching hour, when dealers and collectors pop out of their chairs to make their dinner reservations in time.)

Even though its presale estimate was $200 million, the auctioneer Jussi Pylkkanen began bidding well below that amount, throwing out a starting bid of $110 million, then $120 million, until he heard what appeared to be his first real offer at $140 million. From there, at least three bidders – two on the phone and Gagosian in the room, quickly pushed the price up by $10 million increments.

After just after three and a half minutes, Pylkkanen brought down the hammer at $170 million. With auction house fees known as the buyer’s premium, the work’s total came to its final, $195 million price.

Once the gavel came down, the room burst into applause, and the audience quickly filed out. As he was leaving the sale, Gagosian declined to comment.